The Warglaives continue apace! First up I added the yellow for the chevron stripes. I might have made an error here as I think with the Cerastus I did the black on the orange and then highlighted each yellow stripe separately, nevermind. 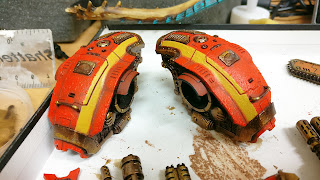 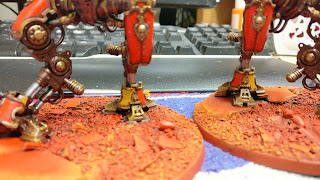 Then came the wash... on boy. I think you can see a certain 'matting' on the paint job. I used the Valejo Sepia wash I bought and although it's not Seraphim Sepia bad there's definitely a potential to go very wrong here. 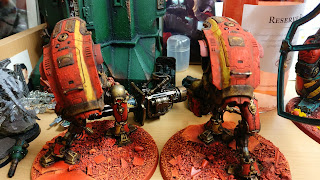 Thankfully I knew it was salvageable as there are a lot more layers to go on. 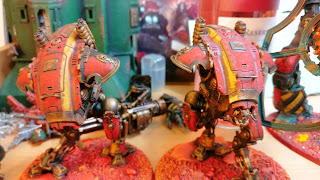 There isn't quite the crusty powder deposits in the recesses but an Army Painter Soft Tone wash would not have done this. While the shading on the metallics is particularly heavy, I need to decided if I'll add some further highlights. I'm not sure if it's worth it as the Verdigris will cover a lot of it up... 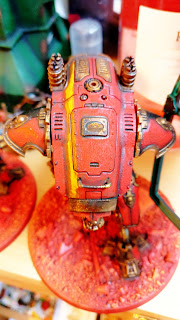 The following night I reapply some Vermillion to help mitigate the Valejo wash effect, which worked really well. I then pencilled in the chevrons, using a cable tie for consistent width. 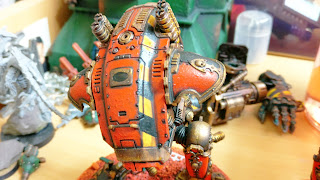 And yet somehow the above Warglaive has 5 black stripes, while the one below has only 4. I've no idea how that happened as they still look evenly spaced. Anyway, this one matches the pattern on the Cerastus, while the one above mirrors it. Should I get a third it will have V-shaped chevrons down the middle of the carapace. 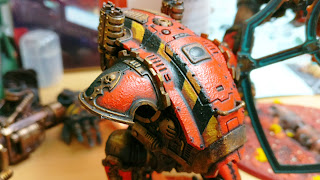 While I was at it I striped the chainblades. 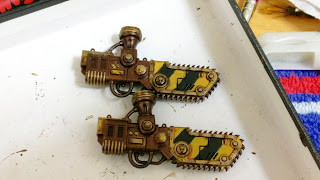 And next step some highlights and prepare for decals. I can't believe how quick these have suddenly progressed. At this stage I still didn't know the release date of the Codex [obviously we know the date now] but I was suddenly very confident of completing them in time for the Record attempt.