Not immediately apparent but the updates of note in these pictures are the highlights on the chevrons [yellow and black], followed by all the rivets being picked out in Bonewhite. All weapons are now washed ready for weathering. 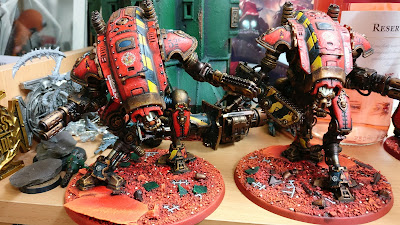 And the faceplates have all been moved on, in particular I picked out the forehead with bonewhite here, 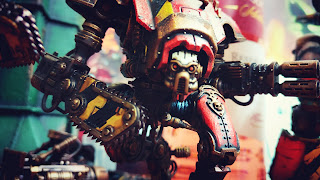 and a stripe on this guy. 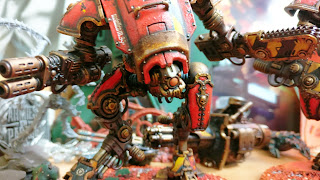 This echoes the Cerastus Lancer who has a Bonewhite crest [you can see where I painted that here]. 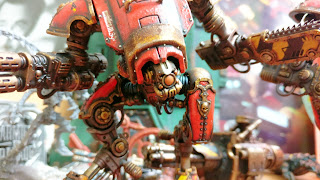 Not sure why I took so many pics the same but the Bonewhite application is interesting as it does not feature much as a House Raven accent colour but I'm employing it to tie in with my Deathwing/Dark Angels and obviously the Tyranids [not that a connection between the Knights and 'nids needs to be made]. But this isn't just House Raven, it's House Corvus - an offshoot of House Raven so a slightly adapted heraldry explains the difference 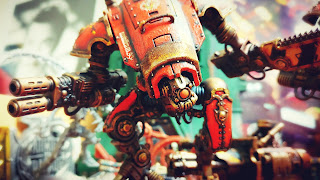 Battle damage next and unlike my Predator and Drop Pods the damage has not been sponged on. Both Imperial Knights had damage painted on and I've done the same here to keep the aesthetic. Chips of Rhinox Hide, edged with my 1st level Red Planet BASE! highlight colour with some additional 2nd level spots for more depth.

Weapons were also damaged and I was able to complete all the chipping over 2 or 3 nights.

All that's left now is finishing off the verdigris, some damage on the debris [sponge damage this time]. Glow effects everywhere and varnishing.

Really coming together now, just in time for the hype train and the World Record attempt at GW Manchester.
Posted by 40kaddict at 12:18