I'm paired with Rob Nathan again, who I played with at DT2 - this time Astra Militarum - Basilisks, Wyvern, Manticore, Leman Russ and Sergeant Harker opposite side was Tom Capper [who I played at NMTBW] with his Blood Angels and Christopher Nettleship running Astra Militarum [endless conscripts, Rough Riders and Mortar weapons teams].

As it was table quarters Rob castled up in the back field behind cover with Sergeant Harker inbetween all the tanks [I think he buffs those around him]. Meanwhile my units deployed were in at the forefront to snatch the objective in the middle [hidden by the containers], in cover in the wood and the Sentinels ready to scout and capture the objective in the ruin at the top. 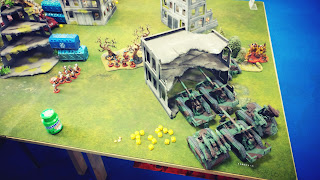 While the many conscripts filled the other quarter, I'd actually though there wasn't much room for the Blood Angels but those two Rhinos suddenly became the tough spearhead to break through as the conscripts followed. Unfortunately the conscripts also became 'tough' thanks to a psychic power adding one to their save and eventually a 'go to ground' stratagem that also made them nigh unkillable. Our first turn shooting didn't go as well as we'd hoped [unfortunately I wasn't the one recording VPs so I only have the final scores later on]. 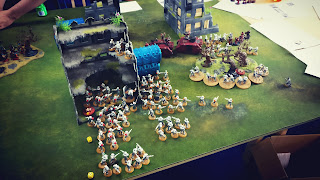 With so much on the board there wasn't much room to bring my ambushes on. The Stealers rolled badly, even with the stratagem, but it was table edges so I still got 9" away from the Blood Angels, unfortunately Rob killed some of them so I was no longer withing a realistic charge range. The acolytes fared better and got score the objective. 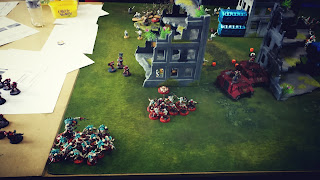 My Neophytes in middle were almost wiped out thanks to the Mortar teams [probably need some of them for my Cult, they seem effective and cheap] while the ones in the trees tried to hold back the tide of conscripts and face down the Rhino. My Aberrants were well out of range to be effective this turn. 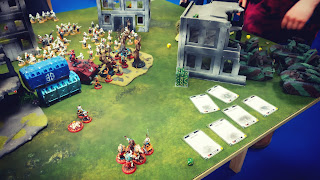 But I still had the objective in the ruins, even if the Sentinels were effectively just babysitting. 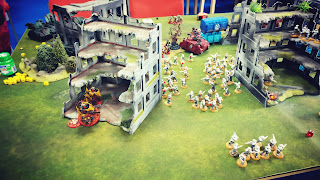 Rob managed to destroy a Rhino, leaving the Space Marines to disembark. 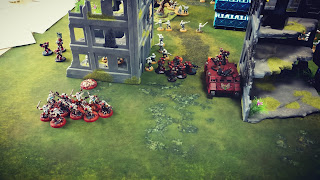 I think I multi-charged the Guards and the three remaining Blood Angels, made the Guard range, but not the Marines, but I think pile-in got them and we were left with just a few Guards, while I kept the objective yet again. 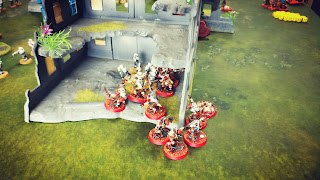 I really liked the marking on Chris's Guard, the three stripes were all shaded, it wasn't just a simple three lines. Some of the other conscripts had solid shoulder pads for squad markings, once they got promoted no doubt they would get to use the army stripes but it was a simple way to add a lot more detail to the may models in this army, remember there was only 875pts and over 100 models! 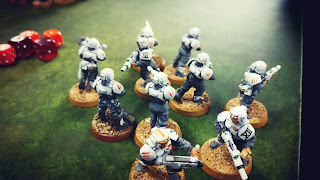 We just couldn't whittle down the Conscript numbers, I think all 3 squads still remained, only one of which had suffered significant casualties. 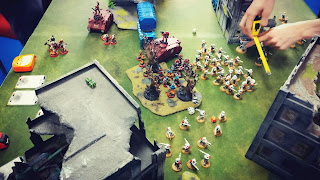 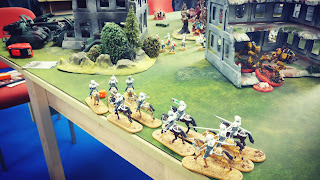 The Blood Angel Chaplain managed to appear out of nowhere, thanks to his jump-pack I think he had a 3D6 charge and also hit with mortal wounds when he multi-charged the Manticore and a Basilisk. I think he later smashed one of them apart. Conscripts also charged through the ruins - tying up the tanks so they could no longer shoot and even worse snatching the objective out from under them because the were ObSec. 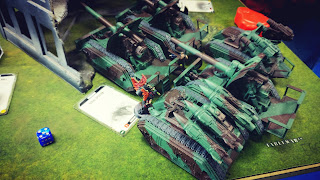 Tactical Squad assaulted my Acolytes who were freed up when the remaining Guard fell back. I might have interrupted the assault order to kills some of the Marines before they attacked. Rob had a Relic to gain CPs back every time our opponents and we spent CPs, so we ended up with double figure CPs for most of the game, it was silly in a way as I think Tom and Chris also had a CP farming system too. 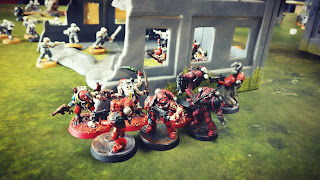 Genestealers finally got in the mix, wiping out the Marines and Guard. 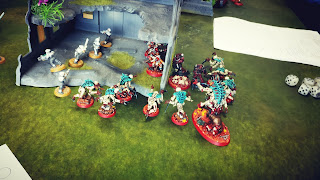 Abberants got into the remaining Rhino, not sure if it was destroyed or if we claimed that objective versus the tank. And that's about as much as I remember, which I appreciate isn't much ;) 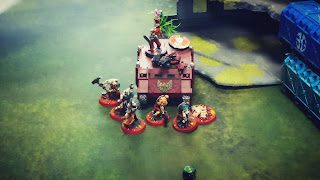 Here's the final score, we scored 7 VPs to Tom and Chris's 14 VPs. Probably the toughest game in a way as the conscripts had to be dealt with due to their overwhelming number but they were so much chaff, worth buttons and so hard to kill that even the extensive artillery, the many re-rolls to wound and hit we had just could dent their numbers sufficiently to gain board control. 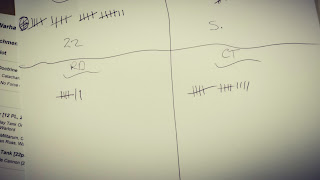 And that's it, not sure what the Blood Points was but it was all moot anyway. Another fun game, completely relaxed, everyone just out for a good time.

And there we go, the last game of Double Trouble 3 and once again the actual placings and win/loss rate of no importance to me whatsoever. As you know Alex has said his next event, on September 1st will be his last, as he has family commitments but will welcome suggestions for format and hopefully another doubles tournament as I love the format and it's almost like a friendly reunion than a competition. I've the painting competition to write up next but for the tournaments, that's your lot folks - stay frosty!

If you're interested in any more of my Battle Reports, point your cogitators here: www.40kaddict.uk/p/battle-reports.html
Posted by 40kaddict at 12:00