You know the deal by now - I set a number of tasks and targets for myself and go about sabotaging it by taking on yet more projects but the muse compels me. Having completed 2 of these containers earlier this year I had found the last three Mentos Cube boxes I'd collected - I so wish I'd bought more. I thought I could do the 'reinforcing' in my lunch break at work. So the plastic got sanded for more of a key when it gets painted, my current ones do chip very easilt but it's soft plastic. I used PVA to stick them on, it;s worked in the past. I wasn't hole punching the circles on the corners/middle I bought some small 2mm adhesive jems to make rivets instead. 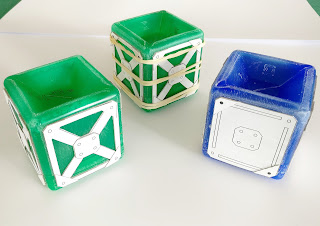 Now the original plan was for these two to me MSC shipping containers  [yes, I appreciate the tautology]. Having done OOCL I wanted another global container brand and the yellow would stand out, except I changed my mind at the last minute as I already have the two biohazard containers that are yellow and wanted to try something different. So I chose orange instead and luckily there's a container company for that - Hapag-Lloyd. Now I'd undercoated these with grey primer and black primer, I then painted them with black masonry paint mixed with PVA and some fine sand [too much fine sand actually so they're far grittier than I'd planned]. All of this is to try and make them more durable. I then primed Red Oxide and the first orange paint was a Dark Orange craft acrylic which had really poor coverage. I had to stipple it twice to get coverage I was happy with but even then the colour was not the 'papaya' orange of the Happag-Lloyd container. 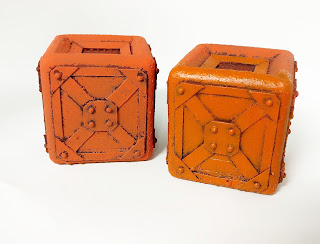 It would go on, be quite bright and then dry very matt, semi-transparent and much darker than I was after. I picked up another orange craft paint from The Works, it was only a pound and the same make as my lime green I use for toxic stuff. It's amazing because it's very like my Vermilion in that it's relatively thick but still goes on thin and also very glossy. It's hard to tell in the pictures above but the container on the left is pre-glossy orange and again the right one required two coats to get the colour I was after, it's almost a glaze! I took this picture in daylight so you can potentially see the difference. 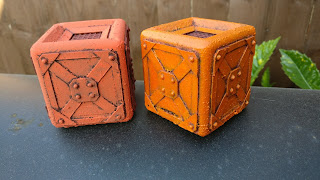 Anyway, it might be a right palaver to do, four coats of paint to get what I'm after, and that's before washes but I'm finally happy with it. I still have some of the earlier stages to do on the second H-L container and I've changed my mind about the third too. Originally the third container was supposed to be Dark Angel Green but I might go for light grey and make it a Maersk Line container, for yet more giggles. Obligatory B&W art shot. 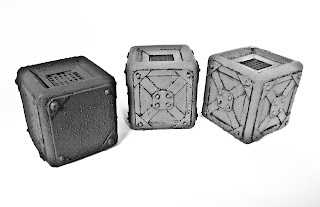 So I do get a Big Build Big Gamboge Stamp of Approval.