I'm paired with Jason Roberts and his Necrons - Destroyer Lord, two units of Wraiths and two units of Scarabs opposite side was Mark Crombleholme with 2 Rhinos [with Havok Launchers] 3 units of Khorne Berzerkers [including Kharn as HQ] and Callum Reed running Custodes, the Leader, the Flag guy and a Jetbike plus some of the ones with Halberds [I'm so clued up]. Looks like Mark and Callum got first turn. 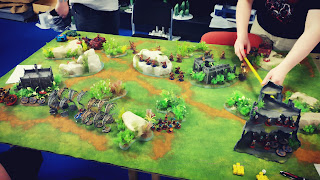 Berzerkers held the high ground in the middle, while the Custodes held the rear, except for the jetbike who went a'hunting. 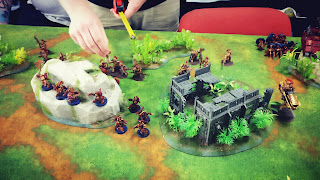 Berzerkers secured the objective on their left flank... 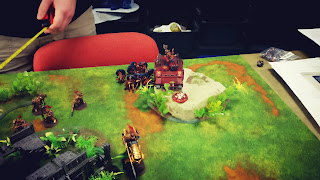 and their right flank too. This gave Mark and Callum 3VPs for turn 1. 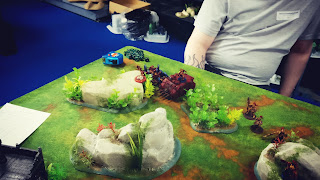 Jason got the Wraiths right up in the Berzerkers grill, unfortunately the unit on the left failed their charge due to a Custodes stratagem [Tanglefoot Grenades] that adds D6" to your charge! We also scored 3VPs. 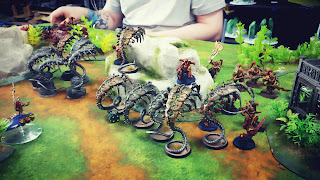 The Jetbike managed to whittle away the Neophytes on our centre objective, but we survived just. 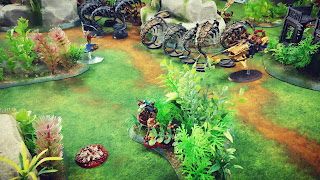 The other squad also suffered loses. 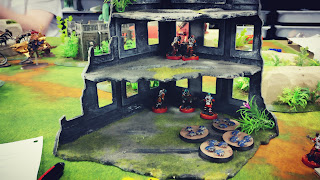 Kharn made an epic charge through the ruins to fight alongside the Jetbike against the Wraiths. 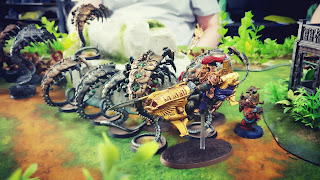 While the other unit was bundled by Berzerkers and Custodes 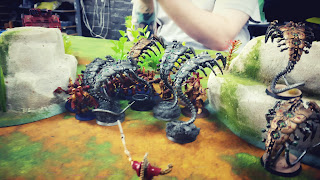 Taking out all but one. 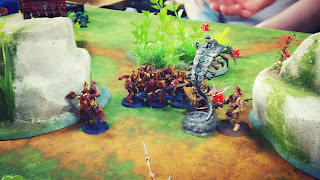 As more Custodes moved in to support their Jetbike and Kharn only one Wraith survived. 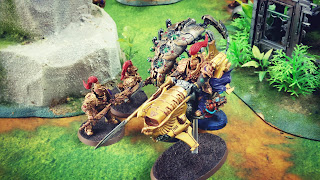 The Destroyer Lord charged to support, but I think a stratagem had been employed that meant he couldn't hit the side of a barn with his lethal relic weapon. Khorne/Custodes scored 3 VPs. 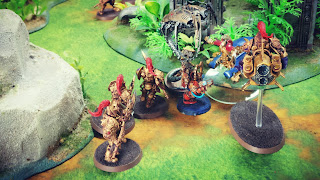 Genestealers arrived in my backfield, Sentinels held onto our objective, their Scarab friends had been sent to our centre objective to hold if my Neophytes perished. 2 Wraiths reanimated. 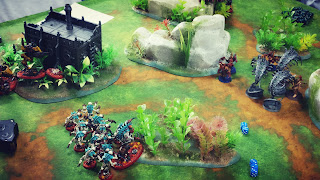 Abberants and Primus arrived behind the Chaos Rhino and made their charge. More importantly they outnumbered it on the objective so we scored 4 VPs this turn. I think we lost the Destroyer Lord and the last Wraith to Kharn. 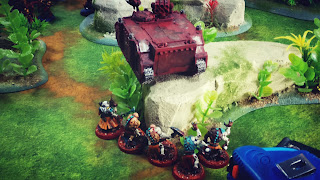 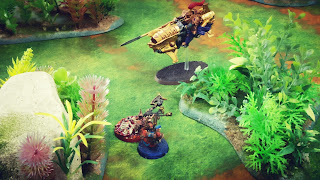 Berzerkers gang up on my Neophytes and Scarabs in the ruins, wiping them out and getting the objective. 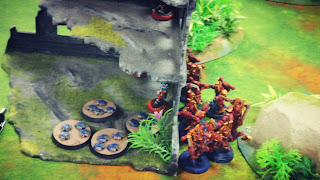 With the Necrons dead, the centre of the board was our opponents, and it was their turn to score 4 VPs. 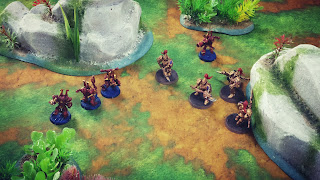 I think I multi-charged Kharn and the Jetbike, Kharn was completely overkilled by 5 of the Stealers. The other 6 failed to take down the Jetbike 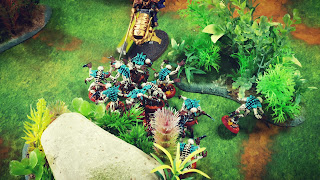 Who seems to have flitted off here, leaving me to hold the objective? 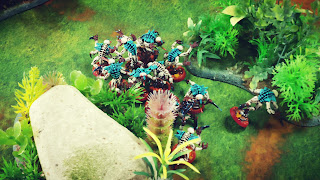 The Primus managed to take the final wound off the Rhino to score this objective after sterling work from his Aberrant charges. 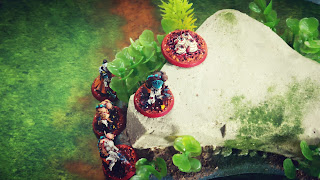 We scored another 3 VPs but one of my Sentinels got taken out by the Chaos/Custodes alliance. The second one would also get destroyed and blow up - 3 out of 4 explosions. 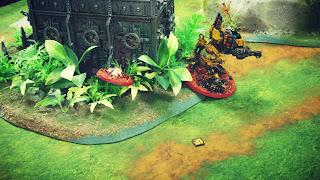 Berzerkers took out the Aberrants and re-took the objective. This got them 5 of the 6 objectives. We couldn't score any, presumably because the last Sentinel was destroyed. 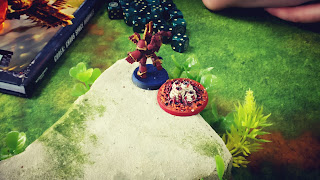 Which allowed them to capture the 6th, and clearly the Jetbike was still a menace, and they scored another 6VPs. I've no idea what was still alive but as turn 5 came to an end we scored 0 and time ran out. 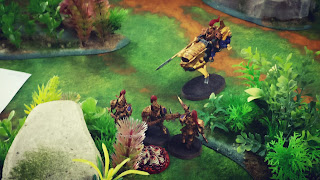 So that was a 21 to 10 loss, but another great game. I've seen Mark at many tournaments, know he's a competitive player [apparently Jason is too] and it was great to finally game against him but in a 'friendly'. He showed the perfect mix of getting things right and having fun, they don't have to be exclusive. Paired with Callum they were a potent tactical force and although I think I once again had the last man standing I was probably too reliant on Jason to do the heavy lifting, although aside from the Stealers I was well aware of the 'lightweight' nature of my list.

If you're interested in any more of my Battle Reports, point your cogitators here: www.40kaddict.uk/p/battle-reports.html
Posted by 40kaddict at 12:00