I'm paired with John Purves and his Iron Hands - 2 Redemptor Dreads, 2 Venerable Dreads and 2 Techmarines to keep them healthy. The opposite side was Dave Irving [who I played at DT2] with Ad-Mech and Matty Longmore [who I played with at DT2] running Death Guard. Here was our table setup with some pretty decent terrain thanks to Element Games North West Gaming Centre. 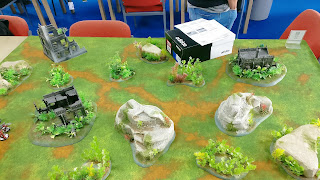 I set up the Patriarch and Purestrains in ambush, the Primus and Aberrants also hiding together and the Acolytes too. This left me with the two squads of Neophytes to screen objectives and board control while John had his Venerable Dreadnoughts sit on our objectives and Redemptors prepare to push forward. Lastly my Sentinels prepared to Scout forwards to capture the objective behind the rock outcrop. 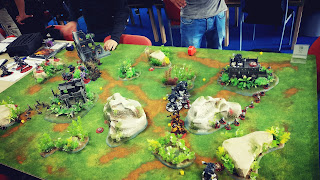 Unfortunately Dave and Matty got to do their Scout move first and the Dragoons captured the first objective before the game had even begun. They were going first but we stole the initiative though! The Sentinels went in for the kill, but their Heavy Flamers were ineffective. 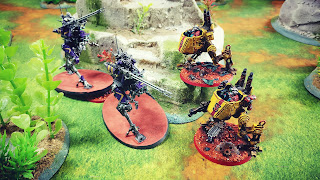 Their Sentinel Chainswords even more so. Seriously they are not worth the 2 points, why do the Sentinels only have 1 attack? Surely 2 or 3 for something that size? Anyway, they did nothing and one of them was struck down but he blew up causing a Mortal Wound on the Dragoon and the remaining Sentinel. By the close of turn 1 we'd only managed to capture 2 objectives, and our other shooting had been pretty ineffective. 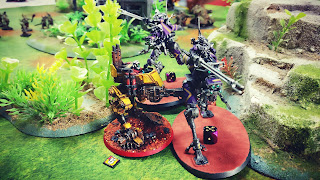 In return Dave and Matty managed to blast one Redemptor to pieces with massed fire from the Kastellans and Kataphrons, plus the Blight Hauler. 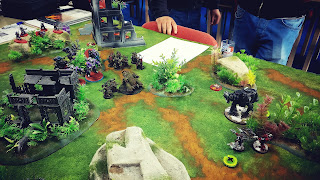 The Dragoons continued to attack the last Sentinel and killed it, again it exploded in a ball of flames. I was beginning to think the Cult had jury-rigged it to blow up [that would be a cool stratagem, apparently Nurgle has something similar]. DG & AdMec turn one score 3 VPs. 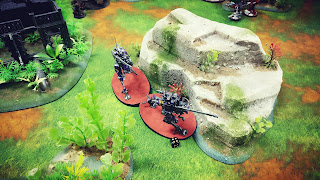 My ambushes turn 2, the Aberrants and Primus arrive 9"+D6", getting a 4 so only 5" away from the Poxwalkers holding an objective 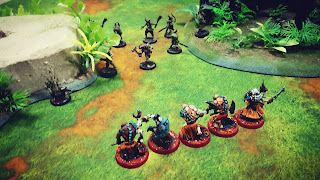 I was struggling to fit the Genestealers in, with them coming in alongside the Dragoons but still 9" away. 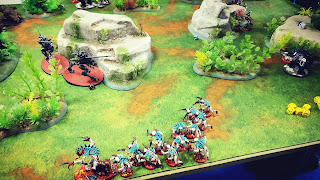 Acolytes also appeared behind enemy lines, pincer manoeuvre for the Poxwalkers but out of range of Skitarii who get to overwatch things from reserve within 12"! I charged both my units in. As you can see the Poxwalkers had two lines double stacked but the Aberrants in particular were in luck as I got to employ Nick Nanavanti's consolidate tactics because you can see that they were quite spaced apart, with room for their bases to slip through, get past that first line and attack the back line, getting closer to the objective. 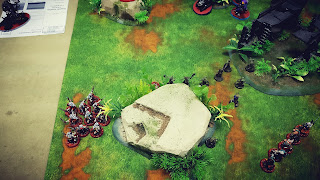 Five Poxwalkers remained at the end, which was when I found out the Primus buffed those Cult units within 6", something I would not forget afterwards but would have possibly made a difference in wiping out this unit. However, we scored 4 VPs this turn, with the Redemptor holding the other objective. 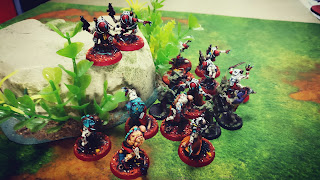 Unfortunately he was left exposed to the Blighthauler and was destroyed, together with support fir from half of one of the Kastellans, their robotic gaze swinging round to add 1.5 robot's worth of shooting at my Genestealers. 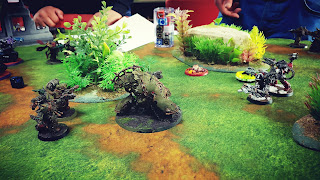 The Stealers were wiped out, serves them right for not making their charges on the Dragoons. The melee in the top was interrupted with the Poxwalkers killing a few Acolytes and replenishing their numbers. I would subsequently wipe them out and send the remaining Acolytes after the Skitarii Snipers in the hills and the Aberrants toward the last Kastellan, I think his twin destroyed by the Venerable Dreadnought. The Primus had to stay behind to hold the objective, meaning he couldn't give his buff. I think John used the last CP to reroll and kill the Kastellan which meant when my Aberrants go 4 for a 5" charge they had no options but to remain stranded and suffer destruction from the shooting of the Kastellan. 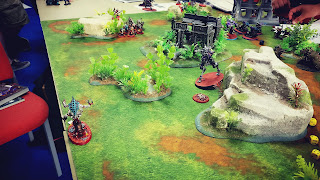 I'd retreated my Neophytes back to hold one objective while the others held the one the last Venerable Dreadnought had been shot off. Unfortunately Typhus made a 10" charge, he killed a lot of them but they held on for 2 turns I think, thanks to some lucky morale rolls. The Blighthauler, having wiped out the remaining Techmarines then went for the other Neopyhtes. 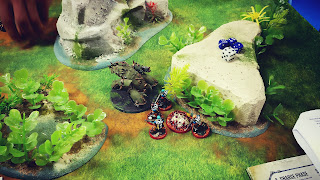 With the Aberrants gone, the Acolytes exposed after killing the Skitarii and the Primus on his own it did not take much for the Kastellan to eradicate the threat in their own deployment zone. 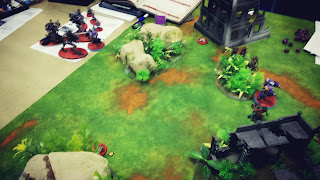 Typhus's Terminator bodyguards finally caught up to him and their foul infections spread through the Neophytes wiping them out too and finally capturing the objective. 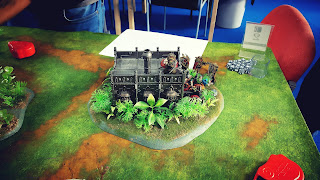 This left us tabled and Dave and Matty in control of the centre of the board. Typhus had been a little overzealous, I think Dave forgot the game ends immediately meaning they lost the chance to hold the objectives for longer and score more points, unless he did know in which case he was playing fluffy instead of trying to rack up points for the overall win. 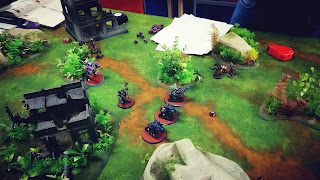 But the game ended and somehow we'd actually won on VPs 13 to 12. Obviously we lost on Blood Points, I'm not even sure how many we killed, I forgot to take a picture of my scoresheet. Either way it was a good game, John had to take a lot of shooting while I sat off the board and sadly did not weather the firepower as well as Iron Hands are renowned for.

If you're interested in any more of my Battle Reports, point your cogitators here: www.40kaddict.uk/p/battle-reports.html
Posted by 40kaddict at 12:12