Last week I took the wife to Nottingham to see Stone Sour at Rock City, it was her Christmas present, she's a huge fan of Corey Taylor. 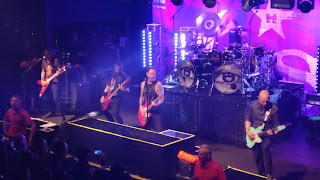 We even met the band! 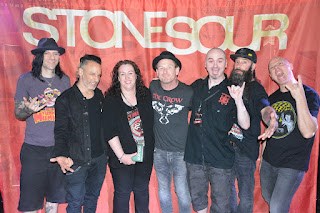 So the next day she was still so happy that she didn't mind stopping off at the 'hobby Mecca' of Warhammer World on the way home. 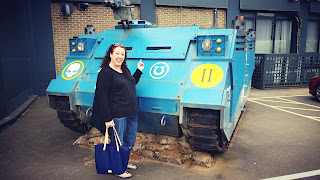 As you can see it didn't take long for her patience to wane ;)

Once inside I took a few pics, the new Sigmar Malign Magic items look amazing.

The painting is sublime too and the Night Haunt models are also spectacular.

The Studio Night haunt models are amazingly painted. I know there are a couple of new Technical Paints that make painting these much easier but seeing how the 'Eavy Metal team do it is stunning. 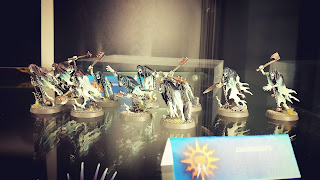 I couldn't get enough of them. 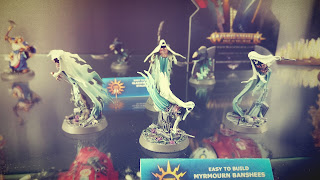 And then there was the store versions which utlised the new paints. 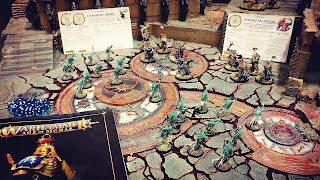 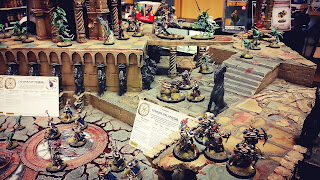 I will NOT be getting into Sigmar... honest. 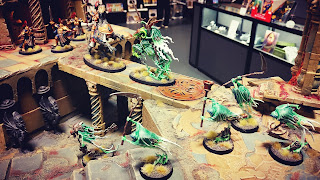 So simple to paint... 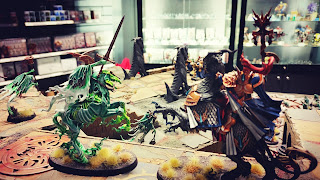 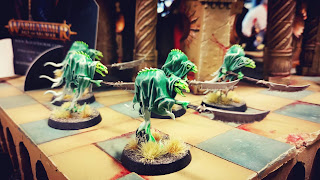 I swear I just find them cool, I've no interest in buying them 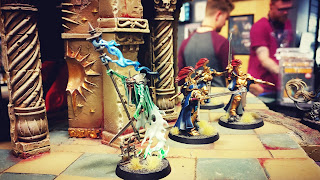 I think doth protest too much! 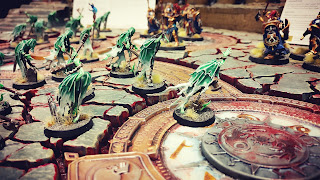 Nah, that's the last of them, it's out of my system now.

Back to my safe space - Knights and I love the Acheron pose. The Studio Valliant is also a wonder to behold in person. The line highlights do not look 'man-made' at all. I don't know how they do it, the rest of the colours are completely flat too, it's insane. 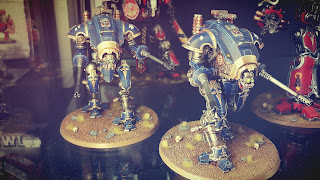 The Castellan, again stunning to see in person. 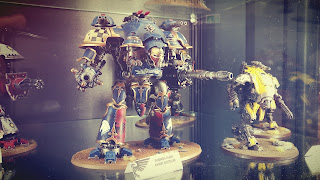 Inside the main hall there was a pretty cool T'au army on display. 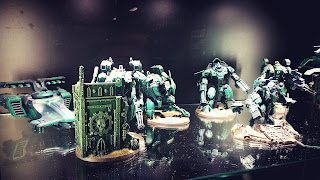 I don;t think my pics do them justice sadly, I'd somehow switched to a filter I never use? 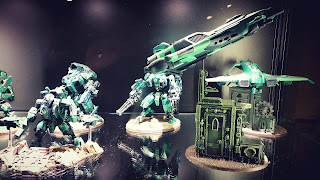 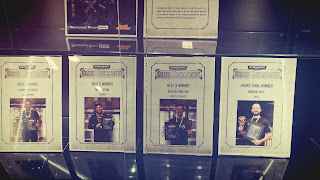 Back in the chop and there was a cool Dark Imperium display board, I liked the windows.

And the front view. 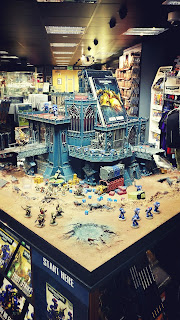 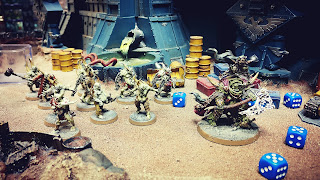 And the 'pièce de résistance' - I give you Brian the Sewer Vent. I cannot convey just how excited I was that Nick from the Warhammer Community Team allowed me to see this little terrain in person. 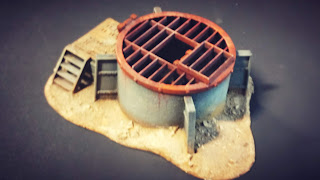 He even let me put the Ferron Splinter fleet on it. 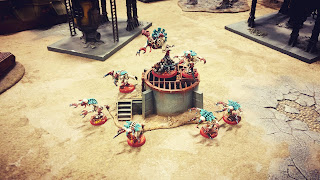 How cool is that? Nick revealed it was created by Chief Terrain Designer Dave Andrews for Apocalypse [I'm guessing it's in the rulebook somewhere]. 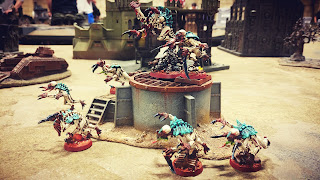 It's currently stored in the 'camera room' and the photographers particularly like it because it's the ideal height to display models on, as you can see. 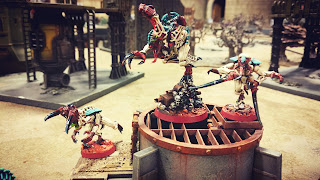 I was physically shaking doing this, I have no idea why but it was such a 'moment'. 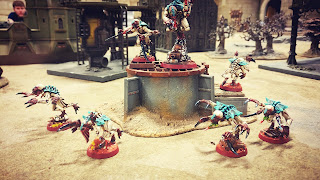 I will definitely be looking to make my own at some point. 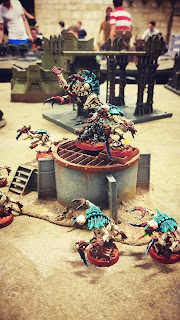 And Nick took a picture of me with the blessed Brian - such a treat. 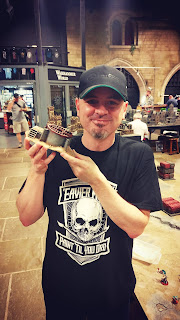 Nick even tweeted about it, I cannot thank him enough. 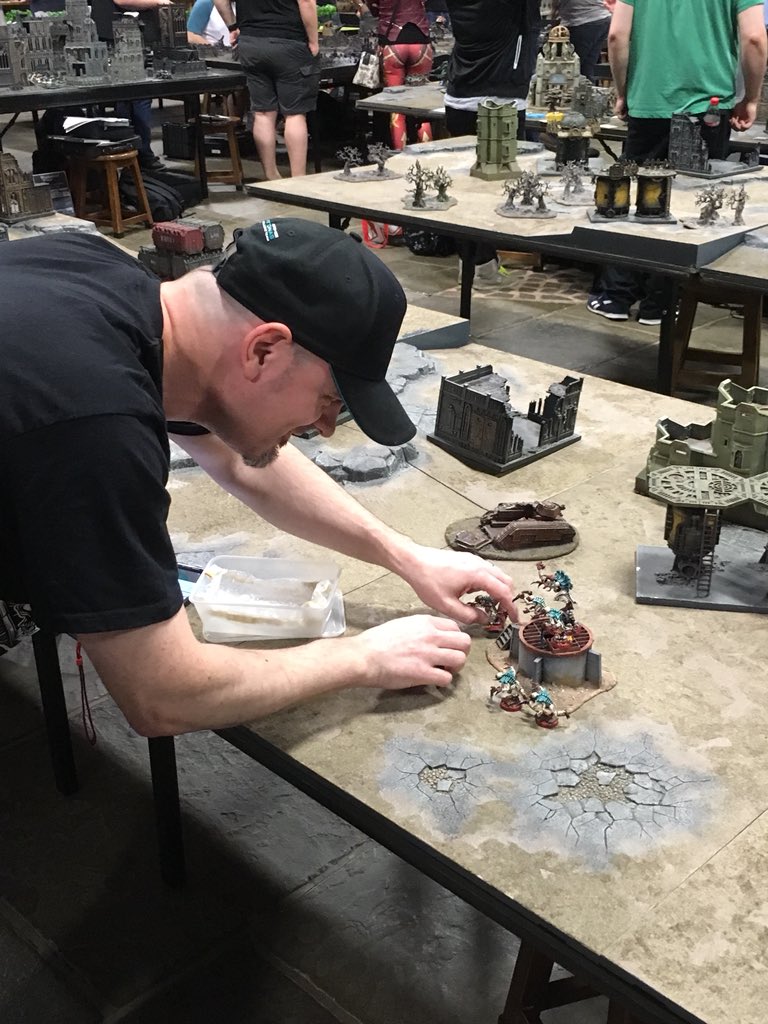 A great couple of days, some major highlights, both hobby and normal life, looking forward to seeing Brian pop in print again :)
Posted by 40kaddict at 12:12