Almost two years ago now, there was another one of my 'honestly not' diversionary tasks while the Dark Angel drop pods failed to motivate me. But what a task to get distracted inspired by - the Tyranid VSG. Although don't get too excited I haven't touched it since, I just got sick and tired of seeing the two posts about it permanently in 'draft' status. 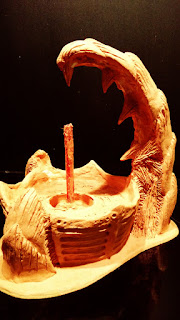 Anyway, this was just two nights work in 2016 as I endeavoured to fill out some of the fibrous musculature on the containment spine. First of course I had to do spikes which were sculpted to match the Capillary Tower spikes on the Skyshield. I probably should have checked that post before beginning, it might have reminded me how fiddly DAS can be, even when applied to the curtain hook core. The clay kept slipping all over the place and it was extremely difficult to bring to a sharp point it just wouldn't play ball. I'm sure Milliput or even green stuff would have rendered better results with their adhesive properties.

After the two nights of effort progress stalled. The plan was to at least get the fleshy bits done, possibly the battlements too. However, I planned on doing a 'how to' video of the fibre sculpting and for that I need a willing child to hold the phone while I sculpt. The eldest helped with my infamous Chitin panel sculpt that I finally posted regardless of it's 'adult' nature.but I haven't been able to cajole him to repeat the process. The upside of losing interest in the VSG was renewed vigour on the Ravenwing Dark Talon, then 31 Genestealers, Land Speeder Typhoons, my Imperial Knight and finally back around to the drop pods, ultimately seeing them through to completion. So despite the distraction it actually kickstarted my efforts in the task I was actually trying to avoid... eventually! 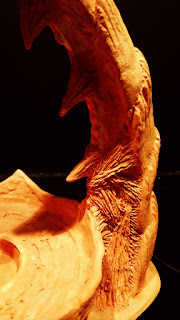