Game 3 of GT3 and I'm facing Dan Moody and his awesome 'Pleasure of Slaanesh' Chaos Deamons.

The low down:
He had so many Seekers, which I had heard were good and fast: 14" move , plus D6+1" advance, plus 2D6+1" charge. They were going to be in my face and yet I still pushed forward in my first turn with my reserve deep strike. Objectives were scoring each turn and I had to hold as many as I could because I could see Dan had a much more difficult army to overcome. 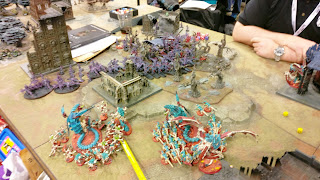 Thanks to all the shooting I managed to wipe out one unit of Seekers for First Blood. Dan later confessed he thought the game was over at this point! Meanwhile my Trygon failed to reach one of the Chariots but the Genestealers made it and thanks to Metabolic Overdrive on the Broodlord were in range of his aura to rend the chariot unto mince meat. Somewhow I'd managed to secure four objectives that turn with the Stealers holding one in the ruin, the Flyrant holding another. 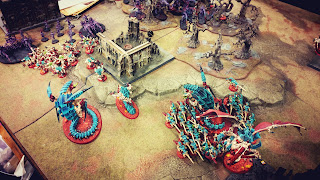 The other side of the board had my Termagants holding the third while one the second Flyrant faced the opposition. 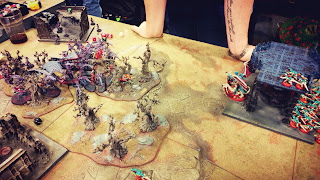 My Tervigon supported the gaunts on their objective and the Skyshiled held the fourth. 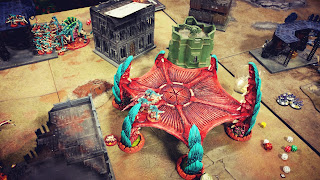 Seekers swarmed my Devgaunts and it looks like they all got dead. 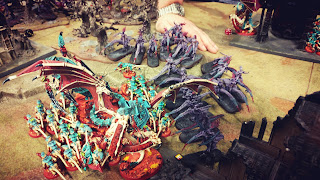 Chariots and Daemonettes surrounded the Genestealers, 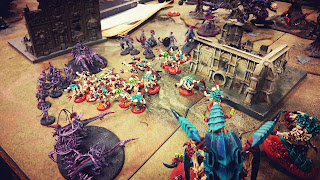 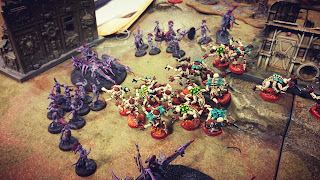 With the Devgaunts dead, the Trygon on 11 wounds and the Flyrant on 8 the two Daemon Princes swooped over with the Keeper of Secrets. They had auras making it difficult to hot so the Broodlord failed to lay a claw on the Keeper. 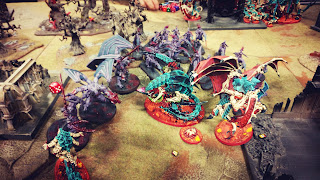 While she slaughtered him with impunity, his invul save worth nought against her vicious attacks. 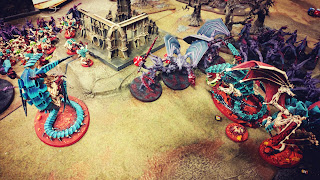 Genestealers were all but removed from the board, just one surviving but no doubt died in the morale phase. 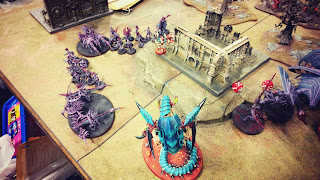 Everything else consolidated in among the Tyrgon and Flyrant. Dan scored 3VPs in his first turn. 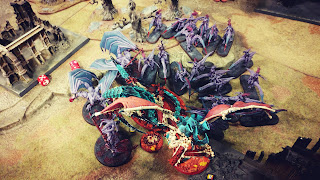 My turn 2 and I still had complete control on this objective. 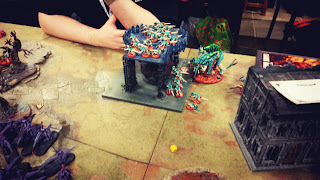 My second Flyrant swooped into Dan's backfield to secure this objective, but there were Daemonettes to kill to capture it. I may have needed Metabolic Overdrive to make the distance. Rippers snatched the objective in the wood. 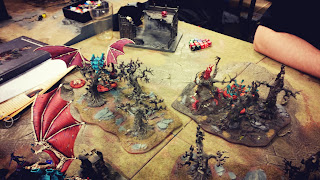 My Warlord Flyrant 'fell back' to the ruins in the centre, hoping to challenge the Daemonettes holding the objective with the Trygon. He may well have destroyed one of the Chariots in the shooting phase though. Meanwhile the other Trygon failed to do very much because Slaanesh strike first! 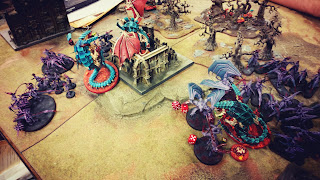 All the Seekers, Daemon Princes and Keeperbrought it down but it might have lashed out and wounded some of them as it died. 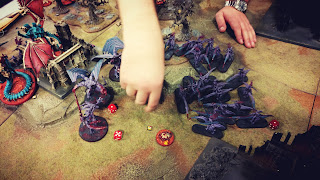 Daemonettes swarmed the Trygon but I couldn't kill enough. 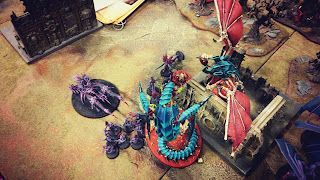 The second Flyrant failed wipe out the Daemonettes but somehow I still scored 3 VPs in turn 2. 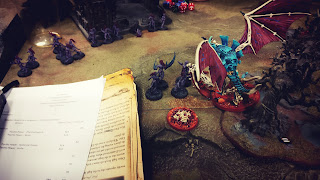 The Seekers now released, they swept across the board towards my Termagants and Tervigon. 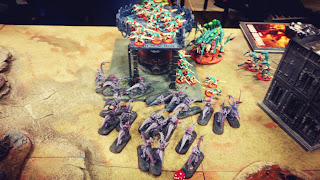 I think that 6 is another Death Throes roll for the Trygon. 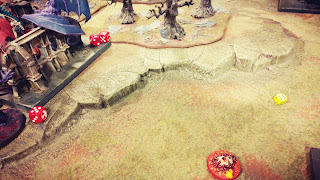 It was only on 2 wounds and the Keeper of Secrets goes from 5 wounds. 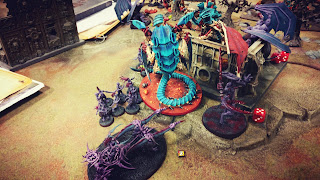 Down to 2. Not sure of that Chariot got wiped out in the process but my Flyrant did, sadly not setting another Death Throes off. 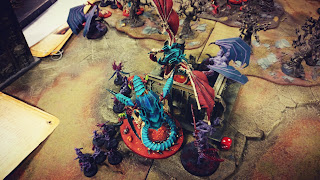 The centre was completely lost and Dan had slay the Warlord. The second Daemon Prince headed for my Flyrant. 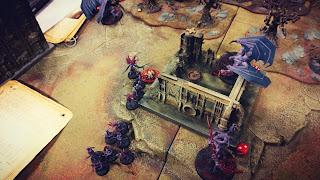 I don't think he survived the combat as I got Slay the Warlord and he may well have been it, but the Flyrant was down to 4 wounds and the Daemonettes secured the objective [plus the one in the ruin] for 2 VPs this turn. 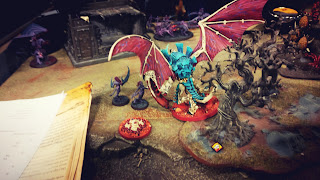 When we went into turn 3 I still had the objective in the woods and the Tervigon held the other giving me 2 VPs. The second Prince swooped over and killed the Rippers. 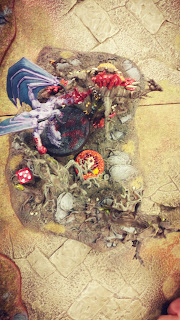 Seekers wiped out everything on the far side of the board which gave Dan 5VPs this turn which put him into the lead with 9VPs to 10VPs [not including secondaries]. 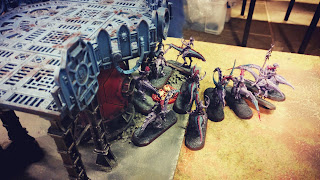 Our last turn and I was able secure just one objective with the Skyshield, remember that? The Flyrant still could not kill the last remaining Daemonettes but he did secure Linebreaker. Dan also followed suit but scored another 5VPs for objectives which brought game 3 and day 1 to a close. 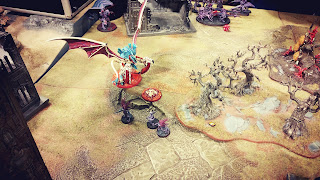 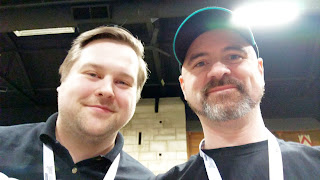 This was such a good game, I was rightly afraid of the Seekers but Daemonettes with so many attacks at -4AP! The inability to strike first also meant I was losing models in combat before they should have done some damage at least. I may well have been beaten [again] but I had a brilliant game and Dan was such good fun. Bring on day 2!
Posted by 40kaddict at 12:13