Game 0 of GT3 as we went early we arrived at Warhammer World at lunch time, ate and then had tables booked for two, half-two. I'd played Otty and Ben in the run up so it was only right I rocked up against Liam's Nurgle Chaos Space Marines and Deamons


The low down:
Bizarrely I had almost zero recollection of this battle by the end of the weekend. In fact I had such a bad memory I had to ask Liam if he could write some notes for the battle report after looking at the pictures. Of course I was so pleased he took up the offer I'm just going to share what he wrote in his words because I find it that much more entertaining :) So this is the game from Liam's perspective and as far as I'm concerned the best battle report I've never written:

TURN 1
I went first moved all the pox walkers up onto the objective (middle board) and the same for the Landraider and the Daemon prince (my right of the board), moved up Mortarian on the left. 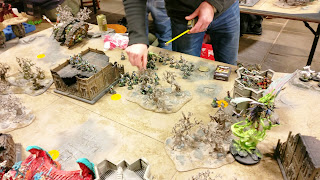 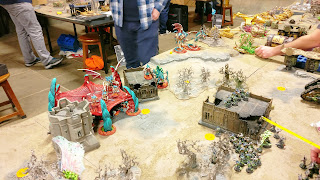 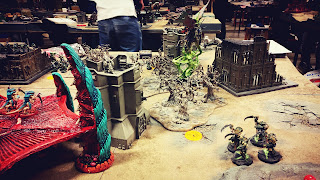 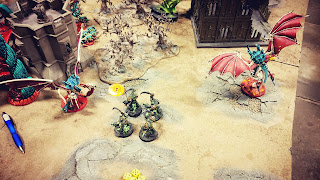 You moved one of the flying things to assault the Deathshroud. 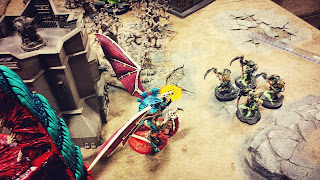 Shot one and killed another in CC. 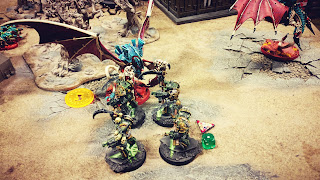 I caused loads of wounds back 4 I think 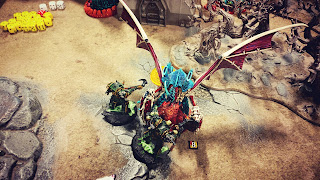 Large wormy thing deep striked behind my lines and with the genestealers assaulted the Landraider. 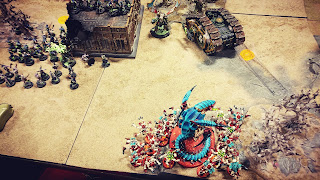 The Landraider was left with 1 wound but in overwatch it caused 6 wounds. 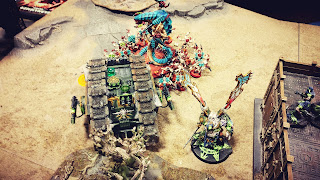 In the assault phase caused another to the wormy thing. 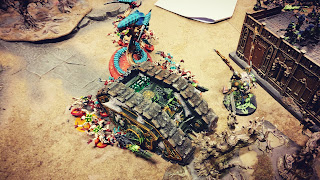 Other large wormy thing deep striked in the centre of the board the termy things shot 1 million times and caused 12 wounds on the pox walkers. 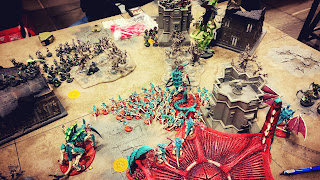 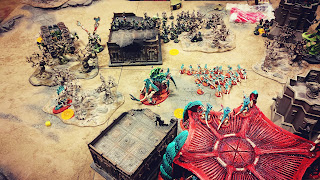 TURN 2
Morty assaulted your flying thing with the Deathshroud and insta killed him twice over.

CP caused the dead walk again and the 20 cultists shot and killed 6 termi things which ended up as pox walkers, then the pox walkers assaulted the termie things and caused 6 wounds and lost 4 in return so 2 up on the deal. First blood. 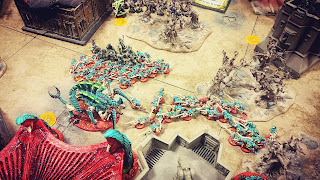 Landraider left combat and the Daemon prince assaulted your giant genestealer and was promptly despatched by him Booooo but until your turn. 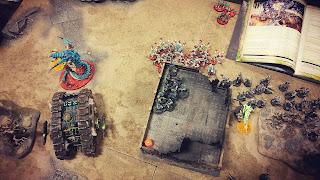 Other wormy thing and warlord assaulted Morty killed the Deathshrouds in the shooting phase and did a healthy amount of wounds down to 9 I think in CC, but he killed wormy thing in response. 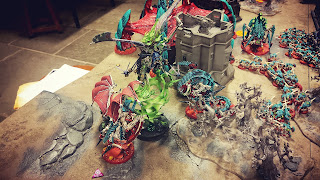 Genestealers charged towards pox walkers caused loads of wounds but 16 I think but Typhus joined in and killed 10 with the help of the pox walkers extra pox walkers appeared.
Wormie thing assaulted Landraider again but died to overwatch I rolled another 6 to hit 6 to would and 6 to damage lucky lucky... 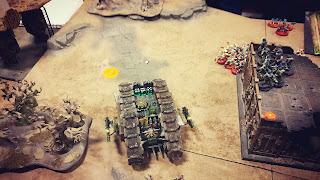 giant genestealer killed Daemon prince in CC
Termie and pox fight, loads died but all were replaced by both sides this was not going to end any time soon.
2 OBJECTIVE MARKERS HELD (Total = 4) 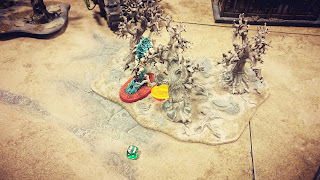 TURN 3
Yours and mine it was very rushed and blurry 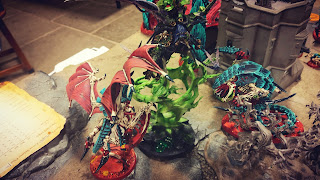 Deep striked Beast of Nurgle and assaulted the giant genestealer killed him and got the objective.
Landraider shot the spawnie beast down to 2 wounds. 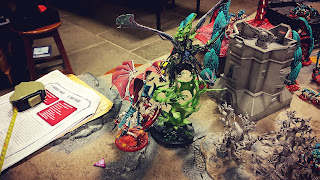 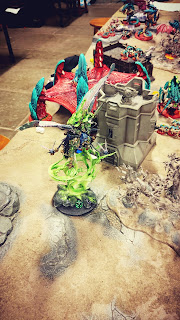 Typhus and the pox killed all the genestealers through “plague wind” and pistol shooting and assault. Finished off in your turn. The second unit of termie things attacked the pox walkers in the middle this was going to go on forever I was upto 25 pox by now. 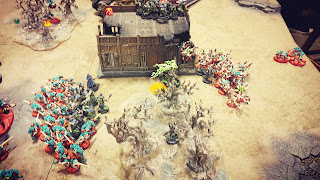 So there you go, I think Liam was particularly incensed by some particularly fortuitous dice rolling on my part. He also managed to 'troll me' good style when he insisted on using my dead Termagants as recently raised Poxwalkers and I was artfully riled as I was expecting to re-spawn them with my Tervigon and I'd only brought enough gaunts to cover my own needs, certainly not donate them for his use! I also got a bit shouty with him, to my shame, as I was trying to play as a 'tournament simulation' and be pacey and quick to better match the conditions we would face over the weekend. Often we ended up perussing our rule books for clarification, which resulted in our game lasting aorund four hours - so much for tournament simulation! Regardless, we had a laugh and as usual there were plenty of good and even epic moments, I just can't understand why I can't recall them!