Game 4 of GT3 and I am a hot mess. I'm regretting the beer, yesterday's lunch of curry [fab as it was] and sheesh kebab [which was far spicier than I would have liked]. Steve Parker is facing me with a host of Wraith Guard [mainly hiding in the webway] and a Wraith Knight. In all honesty I was not with it for this game. I couldn't remember where I'd put my digital camera after game 1. I'd been using my phone since and so I was totally preoccupied with where it could be. The events team came over to give me the bad news that it hadn't been handed in while adding the good news the 'nids had been nominated again for best army. So as Steve went first and started to remove my models with ease I couldn't see them die quick enough, anyway the game...


The low down:
Thanks to the peculiarities of this mission all span the middle of the board, which effectively makes my Skyshield redundant in it's role of objective camper. With a lot of both our armies off board I once again chose Tenacious Survivor for my Warlord Flyrant instead of Alien Cunning to remove him from the board. 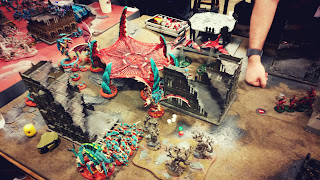 With so many Ranger scouts littering the battlefield finding space to bring stuff on was also going to be a challenge, so it seemed like a good idea to start with the Flyrant on the board. Wraithguard took and objective. Two more units of Wraithguard would secure the other objective out of shot in front of the ruin the Rangers are in. 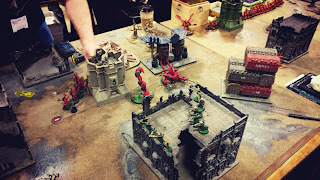 Crimson Hunters zoomed into my Deployment Zone and wiped out the Hive Guard who were hiding in the shadow of the ruins. First Blood, swiftly followed by the second blood of the Tyranid Warriors. 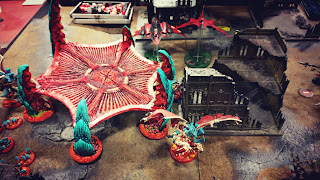 The Wraith Knight shot the Warlord Flyrant to smithereens [Slay the Warlord]. With hindsight it was probably a good thing I was preoccupied with lost camera as I'd have been pretty demotivated at this point if I'd been hoping to attempt some kind of challenge in the game. 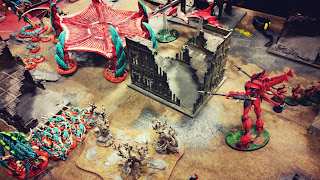 Tervigon surged forward with the Termagants, weight of numbers and objective secured, snatching the objective out from under the Wraithguard. Half their Brood had been killed though. 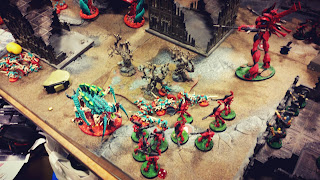 Trygon and Stealers appeared in the Aeldari backfield, I don't think I mad the charge, even with the Behemoth re-roll. The fates were against me it would seem. 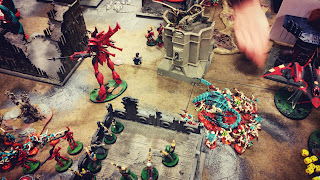 Trygon and Devgaunts arrive on the other side, where the Broodlord had sprinted up. I secured the second objective while my second Flyrant managed to charge the Wraithguard but with an Autarch [or Farseer] holding the objective he was going to survive long enough to score 2VPs on that objective nect turn. 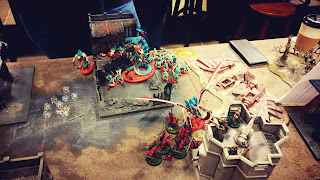 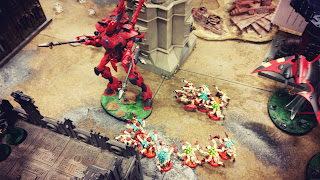 Tervigon was was killed and the Termagants suffered many casualties... 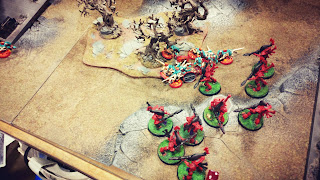 With just two left alive to secure that objective for the Aeldari. 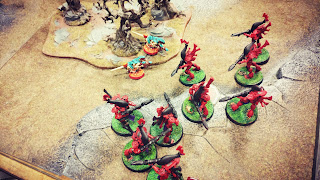 The Wraith Knight charged the Genestealers, ultimately with just 2 left.

The last Flyrant was down to 4 wounds in combat 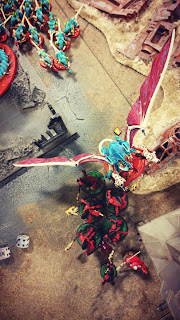 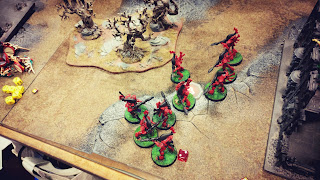 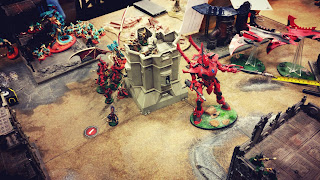 Even at this stage I had some innate tactical awarness. I fell back with the Flyrant, movign to the other side of the objective to take out the Autarch with the Broodlord ensuring he died, unfortunately that must not have been in my turn as I'm only down as 1VP, which would have been the objective in the Ruins. Still, Slay the Warlord and as the Broodlord made the killing blow I used my last CP to use Feeder Tendrills and managed to regain 3CPs [although I later discovered some believe Broodlords cannot use Feeder Tendrils because it states Genestealer can do it, he has the Keyword GENESTEALER though so I'm unsure on the difference?] 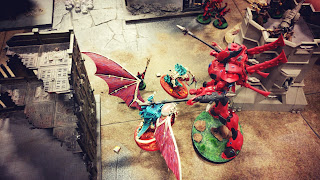 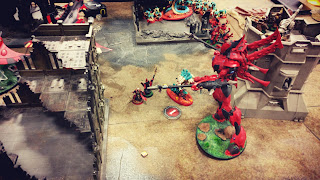 The Gaunts were engaged. 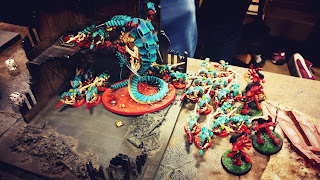 The Wraith Knight assaulted the Broodlord and I had to make five 5+ invuls to evade his assault. 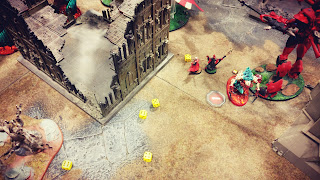 But that one 4 took the Broodlord out. This left the Farseers holding the objective with the Wraith Guard holding the other one. 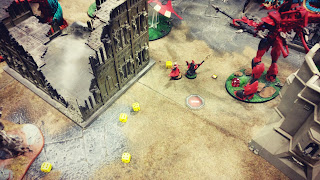 Wraith Knight moved to the ruins. My Trygon extracted itself from the ruin and then moved to charge the Wraith Guard. I may well have discovered my lost camera at this point which caused blessed relief but the game was lost in all but name. 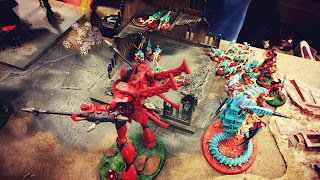 I mustn't have done much damage. I socred another VP for this objective. 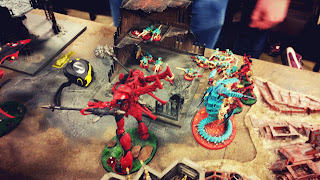 The Guard fell back and killed yet more of the Devgaunts. 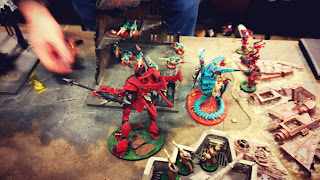 Wraith Knight mopped up the Devgaunts the everything shot at the Trygon who must have lashed out in death throes. 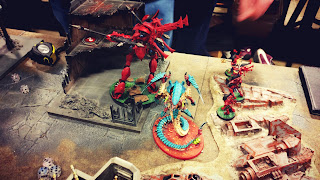 As only 1 Wraith Guard remains. With some Rippers still on the board, trying to sneak Linebreaker Steve had plenty of time to score another 8VPs over turns four and five while he wiped out the Skyshield to ultimately table me. 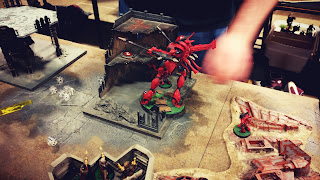 Steve was an absolute top bloke throughout. Out of all my games this army completely outclassed me. Sure the Orks had done as good job but that was numbers and poor tactics on my parts and good tactics on there's. This was an army that was just in a different league. In fact my kill points were just the Autarch on 77pts, which I felt truly embarrased byt after yesterdays ribbing on the 82, but thankfully Liam had a worse game in the 40s so he really sucks compared to me! 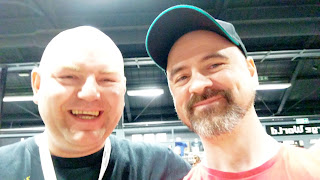 I really appreciated Steve's patience and thanfully we finished with 20-30 minutes sparer for me to start shifting my stuff into the cabinet and then game five.
Posted by 40kaddict at 12:14