I finished all the Deathwatch Overkill boxset [except the 2 Purestrains] quite a while back but never had the chance to play since. Luckily I bullied Ben in to having a go, he really likes the Deathwatch Marines I did so I didn't have to twist his arm too much. We started off the first mission, which I still believe you have to be some kind of special unlucky to lose as the Marines. I think he chose a couple of guys at random and some just because he liked the models but his squad was: 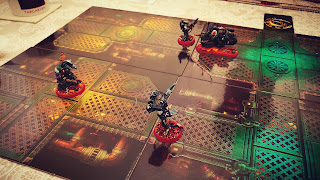 The Free Radical Collective emerged from the bowls of the underhive. 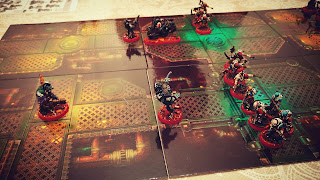 Interestingly discovered these are open gantries, not enclosed rooms as PeteB and I always played - so no LoS blocking walls! 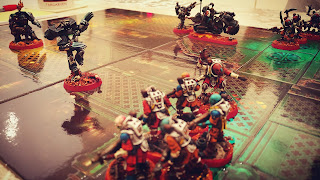 Deathwatch attack and I lose all but 3 hybrids in the middle of the board. 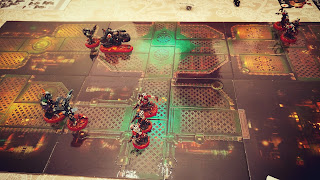 Jetek surges ahead to confront the cult deep in their territory. 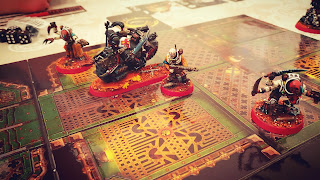 But he had been lured into an ambush as two Abberants surged out of the gloom. Jetek struck one of them dead but couldn't kill them both. 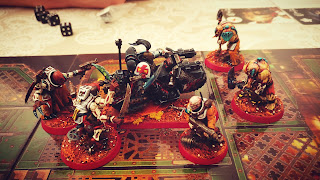 I had a gambit that allowed models to strike twice, which was sufficient to put the White Scar down through weight of attacks. 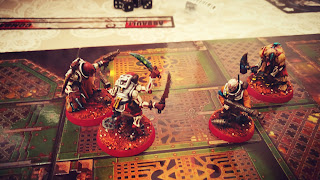 Branatar and Setorax had struggled to keep up with their watch brother, covering their rear. 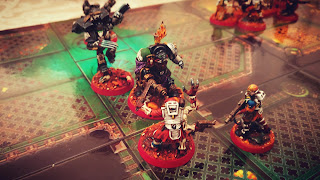 Having killed the biker the cultists advanced to add weight of number against the three remaining Marines. 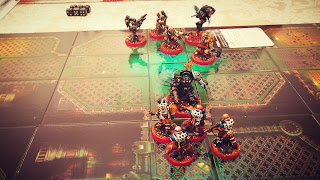 And yet more cultists appeared from the hive. 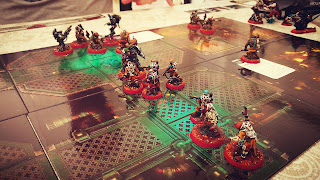 The Kill team had to respond 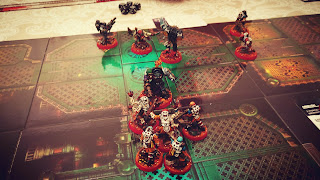 Branatar's flamer immolating four in one blast of holy Promethium. Meanwhile an Abberant skulked off into the network of tunnels to ambush the squad when and where they least expected. 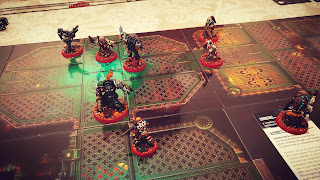 The cultists that survived continued to press the 3 marines in an attempt to swamp them. Two Abberants appeared next to Ennox Sorrlock and Setorax, but Setorax was attacked from his flank as a third Aberrant appeared from the tunnels. 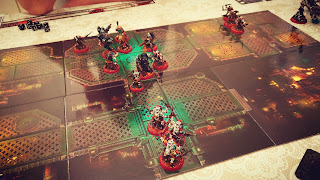 Setorax was able to counter the newly arrived Abberant and further kills ensured that the Kill Team met their target of 30 dead cultists. 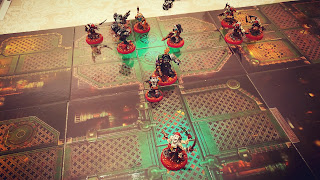 It's difficult to convey but this was in the balance at one stage. Although I hadn't played in a while I was quick to suss how some of the Gambits could work quite well and used them to great effect - overwhelming Jetek Suberei for instance but Ben brought it back at the end as my cultists sold their lives cheaply.

With his eye in we set up mission two to control the four vox devices oin the top right board. Ben chose a new Kill Team of: 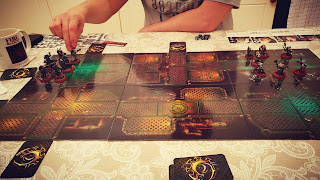 With seven cards to draw and five to play my ambush looked pretty impressive first turn. 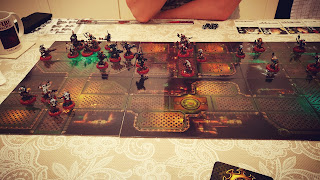 But the Kill Team was more than ready as they moved forward to secure their hive section. 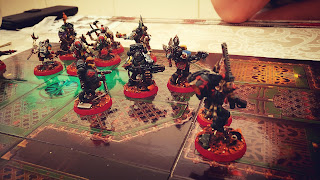 All the ambushes in their deployment were wiped out. 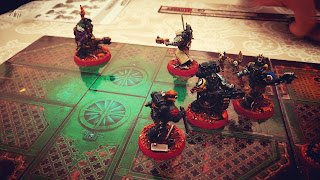 But some long range speculative fire was able to take down Rodricus Grytt and remove the Frag Cannon from play. 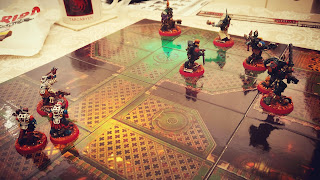 The squad advanced deeper into the hive and on towards their objective. 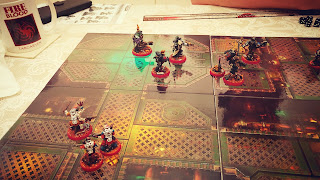 The Vox Controls were guarded by two Aberrants and hybrids but I had to stall their advance and moved the Aberrants forward. 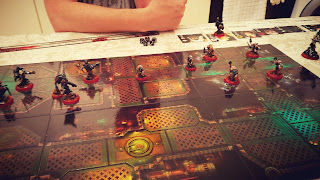 These beasts were backed up by a Purestrain Genestealer and yet more Hybrids as they attacked the squad, which had just leapt the chasm between the gantries [while Branatar arrived via teleport]. 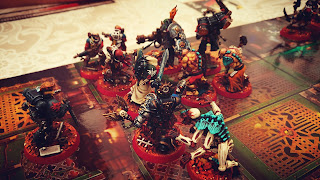 Further support moved into the Vox room to defend the controls. Meanwhile, a pair of Hybrids shadowed the Kill Team on the far side of the gantries and more cultists arrived from the Deathwatch deployment zone. 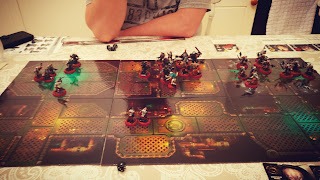 With brutal efficiency the Deathwatch purged the Xenos, Chaplain Cassius inciting new levels of violence in his squad. 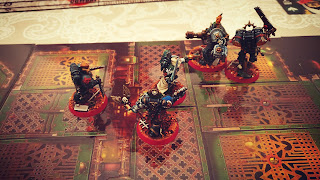 With their path clear the Kill Team deployed into the Vox room. Two more Aberrants and two Purestrains rushed to prevent them controlling the Vox, they surged forward and the attack twice gambit allowed them to take down the Blood Angel. 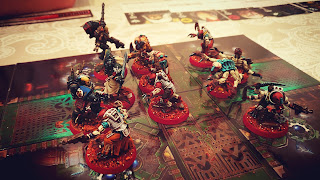 But he was quickly replaced by Brannatar and all my heavy hitters were destroyed, with my next round of ambushes being mainly Elites - the Magus and Primus. The Magus managed to cast Dominion on Branatar, removing his potent flamer from combat. Meanwhile an Aberrant reached the fray thanks to a double move Gambit that put Drenn Redblade in the meat grinder. 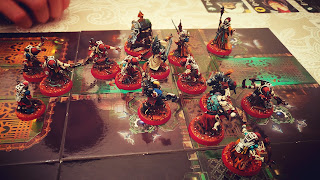 With the third squad member dead there was no way Kill Team Cassius could complete their mission to control all four Vox and the game was over. 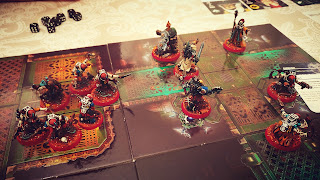 Ben was really unlucky to lose Rodricus Grytt so early on, without that casualty he would probably have made it. It's also worth noting when the 2 Purestrains came on I had another ambush for a third, now you only get 2 Purestrains in the box but obviously I've loads of Genestealers so we initially had the third one come on but their efficacy was unreal and would have wiped out two squad members in one turn, so it was easy enough to pretend it never happened, rewind and stick to the units you get in the box in future.

Anyway, Ben liked it so hopefully we'll continue the missions next time.
Posted by 40kaddict at 12:08