The problem with taking my To Done! pics all at once is the order of completion gets messed up. I suppose if I publish them in the correct order it solves that issue but I can't be bothered ha, ha! The Sentinels were completed after the upcoming Deathwatch but they just fit better in my schedule to showcase them now. 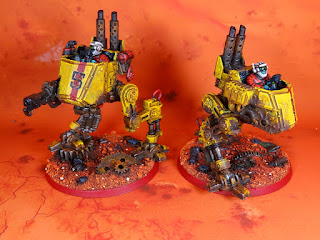 You may recall I picked these up off ebay, two for £18. 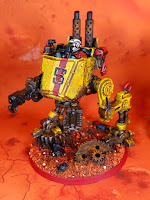 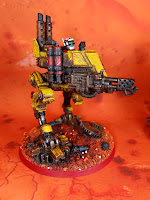 Granted I was missing a heavy flamer and some of the canopy but I cut the remains of the canopy off so it was open-topped and I'll pick up a flamer eventually when I do a bits purchase. 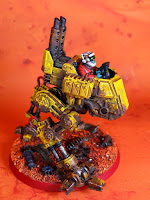 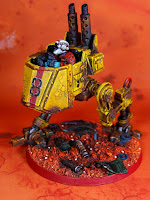 I also rebased them with a set of 60mm bases from bases4war.com. I still think they're the best value resin bases on the market, they take a week or so for delivery but the quality and price, not to mention FREE UK shipping [explaining the delivery] makes them well worth it. 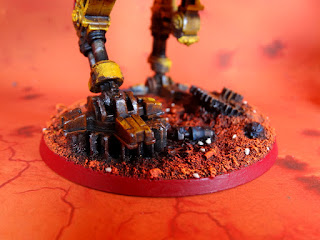 I threw on some Martian Ironearth after the undercoat to get the cracked flaky paint and wanted to make them really weathered. I could have gone a whole lot more rusty and decrepit, maybe next time. 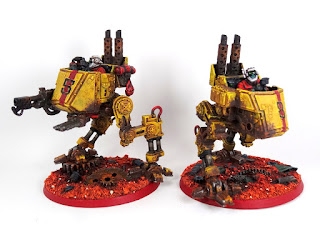 I absolutely love this model. I know it's quite an old one and there were at least 2 versions prior to this but I think it's great and it was so easy to paint. 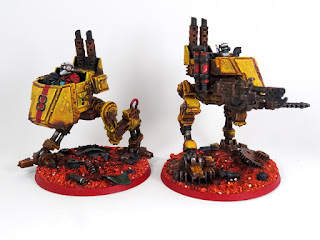 After all the intricacies of the Deathwatch it was so nice to just crack on with these, the yellow was wasy to do and the grunge meant any mistakes were obscured without any guilt. 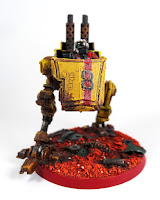 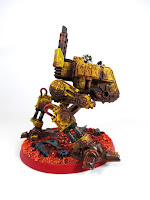 I also hope to get some armoured variants at some point. I'm pretty sure these will end up getting trashed first turn in most games, most things that get deployed ahead of the bulk of your army usually do but I love how they fit into a Cult army. 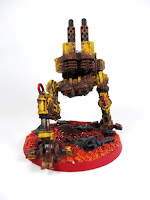 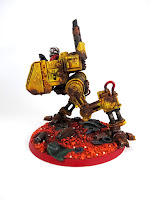 Are they Imperial Guard or construction/mining vehicles? Who knows but I love 'em. 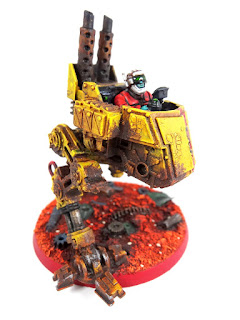 The Flamers too are the obvious choice given you don't suffer the -1 to Hit for being Heavy and moving with them. 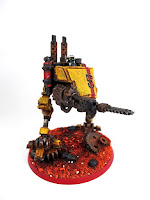 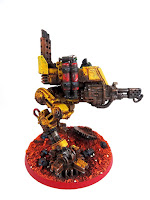 The Chainsaw might pointless as it might be optimistic they ever get into assault and the Cult have much better options in that field but I can't help feeling its naked without some combat weapon. 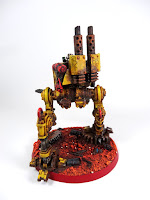 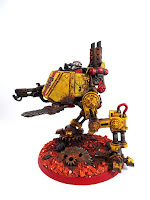 The Turq pilot was also a triumph, and vaguely reminiscent of the Rebel Alliance. 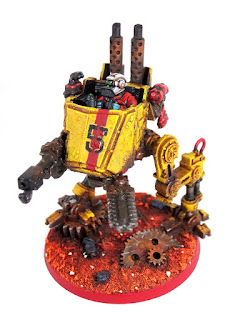 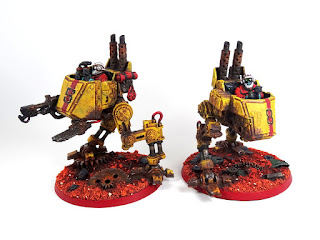 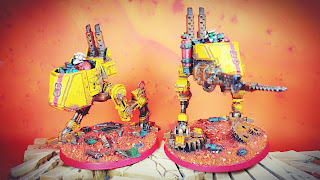 And there we go. They might not have been noted as the keystone models of my Cult Armies on Parade board but for me they were vital in selling the theme of the Cult assaulting a storage facility. So a Great Big Gamboge Stamp of Approval heads my way :)