The Trygon is complete, although I hadn't glued his head on at this stage [yeah I don't know why either?]. 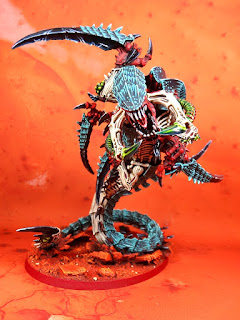 Annoyingly when I did glue it in place I still got the torso out of whack, which meant the head still isn't straight and more importantly couldn't position it completely in the neck socket for a perfect join. 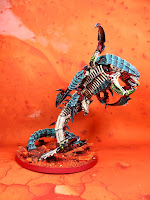 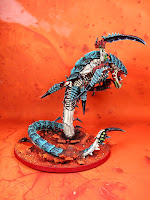 Instead it's just the pin, a whole load of Super Glue Gel and two super glue joins to where the head crest touches the Carapace 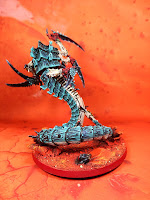 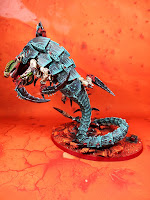 Close-up of the base, you can see the claw highlights and the additional spot third highlight on the Chitin just to define some of the more important ridges. 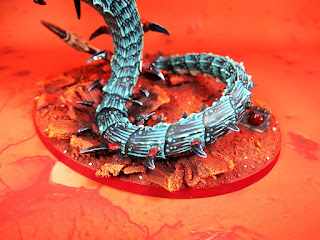 Another little bit of debris, Deathwatch or Ravenwing? You decide which was the unfortunate rider. 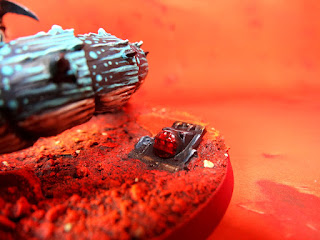 And the other side of the base where the BBQ chips were used to great effect to represent the way the Trygon thrashes along the surface to move about. 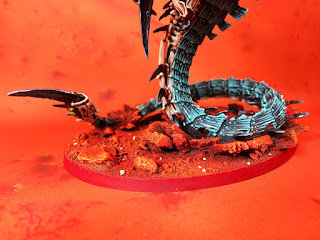 Obviously the biggest changes since my last update are the extra highlight on the Chitin, the black talons and claws highlighted and seeing the toxin/plasma effect in context with the rest of the model. 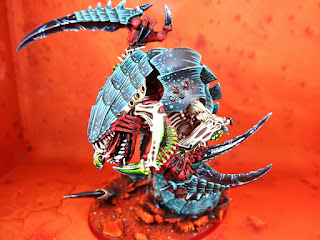 I had originally planned to do a video of the green being applied but foolishly shook my Dark Green Valejo paint just before I began, which given how the process specifically requires the paint to remain un-mixed rendered the whole process redundant. 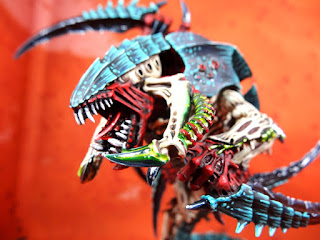 Still it came out OK in the end I think. Obviously it's bold choice to retain the the Trygon plasma as green like it's Toxin but I didn't want to introduce another spot colour as the green on the red/bone/blue/turquoise is enough. Recently my Carnifex had blue bio-plasma head so I could try a new style but the green came out so well. 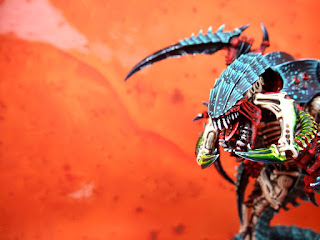 I could have highlighted the green more at the front, like a Doppler effect going down the containment spine but opted for an edge, but still front weighted with how much is highlighted towards the tip of the spine. 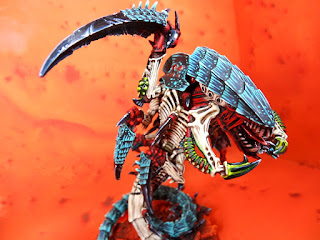 Finished pics on the white background, y'know in case I can ever be bothered to send these to White Dwarf. Ha, ha. 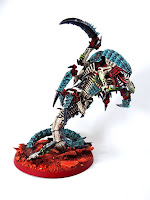 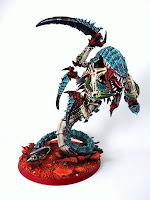 The irony is I'd be sending them through my gmail address but I really only access that by phone which means I can;t be bothered to type anything up :) 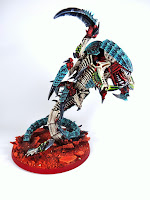 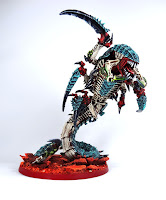 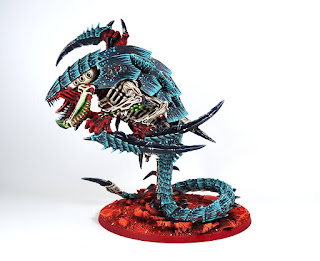 Moar pics tomorrow, of the phone variety and there are some absolute doozies! 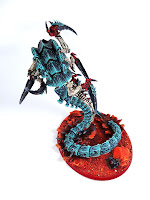 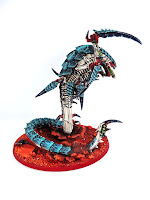 In the mean time Great Big Gamboge Stamp of Approval!