My Crushing Claw Tervigon has been a staple of my army since 2011 but when I was painting it as a sub-assembly I asked myself even then should I magnetise it? But I was still quite green with my hobby skills and I was much more wary about screwing up the basecoats and wash I'd achieved so far than today, where I can drill this mother and worry about fixing the altogether finished paint job afterwards. 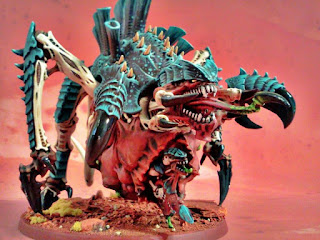 Now I've loved the Crushing Claws since the days of Biomancy Warp Speed. The ability to do a potential 9 Smash attacks [and it did on numerous occasions]. Granted this lumbering beast, moving with insane speed and smashing apart things with brutal ease, doesn't quite add up but that's what prompted me gluing them in place and that's what I was worrying about now that I had to remove the Claws from their sockets. I was imaging I'd have to drill some 0.5mm pilot holes, join them up and then slip a small screw driver into the gap and hopefully pop it off. But thankfully I didn't need to. 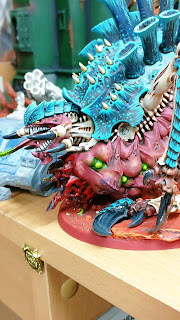 The thing with poly glue is it comes as liquid poly and poly cement. Both work by softening the plastic and the two pieces melt and bond together. But from my experience poly cement, although great for gap filling doesn't melt the two parts quite as much as liquid poly and often acts as a sandwich filling between them rather stick them together. And so all that was required was to jimmy the screwdriver in without the pilot holes and they did indeed pop off without any damage to the model! 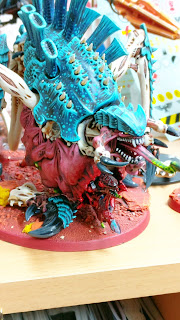 On to the drilling. Once again 6mm holes to fit my Magnetix magnets. 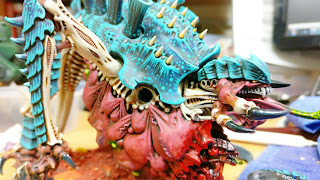 I've still got a load in my garage that need to be separated from their plastic but I've a few knocking around from my last scavenge. 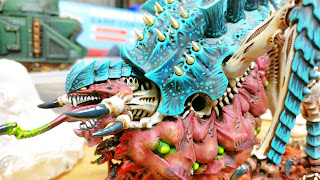 Glued in place, using my current magnetised Scything Talons from my other Tervigon to ensure polarity it consistent and therefore I can swap the weapons to either model [hopefully]. 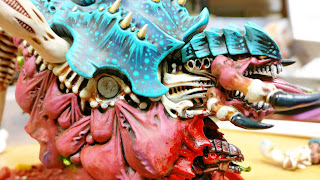 One reason for doing this is if I want to take a Rupture Cannon for a Tyrannofex. Currently the Mawloc head conversion on my 'Great Maw' Tervigon makes magnetising the Rupture Cannon a little difficult. I mean the gun is fine, it's just the feeder arm. Obviously I had the same issue with the Acid Spray but fixed it by extending the feeder tubes. I can try the same here but it's clear it'll be easier to achieve on this Tervigon head than the Mawloc/Tfex conversion. 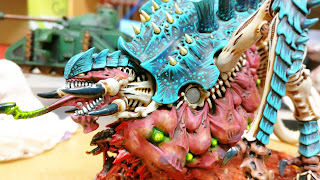 Claws magnetised and as usual versatility means I do end up sacrificing the pose a little. Unfortunately I put the magnets into the claws almost perpendicular to the arms so the only poses I can make are tight into the body raised.

And tight into the body lowered. I'll never get the wide mid position I'd originally glued but I actually don't mind these poses so much. 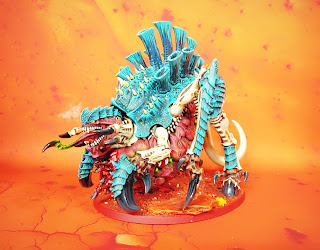 This pose looks actually quite cool because it comes across as a quadroped with forearms, not a hexaped [is that the correct term?]. 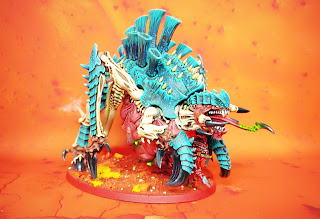 And here it is with the Scything Talons in place. Interestingly this pic was taken the following night, no extra lighting just the fluorescent tubes in the man cave and yet the pictures still look great, in part due to the Veliva filter. 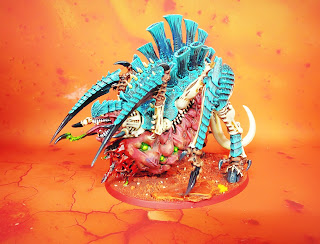 I thought I'd also try putting the Acid Spray on it but it appears the Great Maw Tervigon must have had it's magnets standing proud of its torso, not recessed like this one. 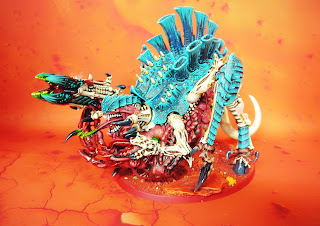 As such you can see there is a significant gap on one side. 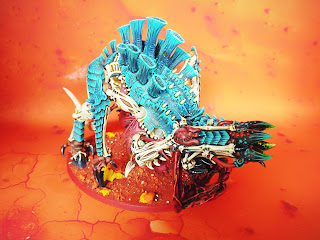 Regardless these pictures remind me how much I love this model. Granted painting this one originally was a nightmare and it would have been nicer if it was easier to re-pose it but it it just so big and brutal looking. This model makes me like the Tyranid faction more than any other model in the Tyranid line, I just find it really impressive.