Last game and I was still on table 12 but my opponent this time was Ian Plumpton. I first met Ian at Blog Wars 9 over four years ago which is another enduring success of Alex's events - a regular group of people continue to participate and it's always cool to meet up again. Ian was using Tau this time [instead of his Adeptus Mechanicus] something I believe he started because he won some Tau related goodies in one of the Blog Wars ludicrously generous raffles.

Ian's deployment, twin Devilfish with Breachers either end of his line with the Stormsurge holding the centre, two Ghostkeels pushed up in my grill and two squads of Stealth Suits, one with the Ghostkeels and the other right up against my DZ just outside of shot on the right. 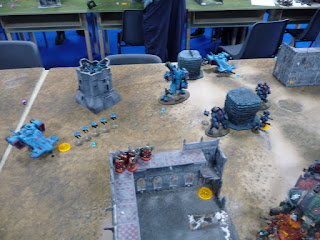 You can just see the second squad of Stealth Suits on the top left, so I deployed the Ravenwing bikes to counter. Black Knights arrayed against a Ghostkeel with the Dark Talon and Knight holding the centre opposite the second one. Scouts hold the high ground in the ruins. 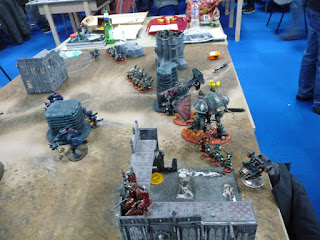 Devastators in the abandoned Bastion and my Plasma Tactical Squad in the centre, Flamer Squad beside the Knight with the land Speeder. 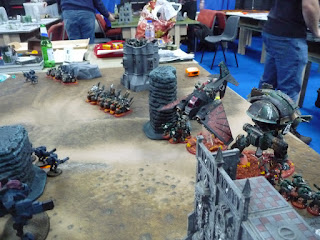 Turn 1 and my cards weren't good I had drawn objective 4, which was in the ruin to the top left but thought I couldn't get it. But I'd accidentally positioned my Ravenwing Apothecary in such a way that he could just reach it. The rest of the Black Knights positioned opposite the Ghostkeel, while the Dark Talon zoomed forward. 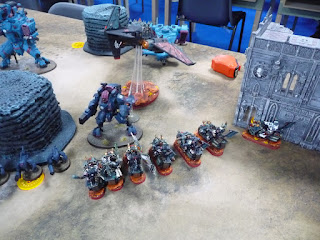 Ravenwing Bikers positioned between the Stealth Suits and the Black Knights. This gave me options - I could see how their shooting went and charge if they weren't successful, and if the Stealth Suits could be dealt with they're then in a position to sweep round with the Knights supporting that flank. They were also helping to cover the Apothecary too. 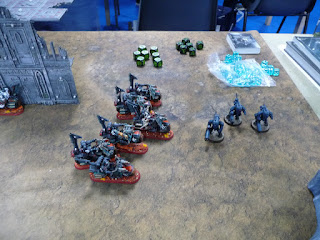 The Knight moved up to the second Ghostkeel with the Techmarine sprinting to keep up and the Librarian a little ways behind. 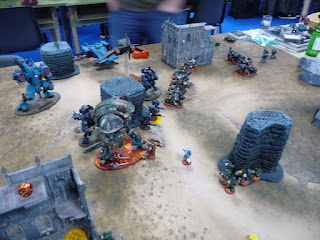 Tactical Squad took cover int he ruins and the Land Speeder repositioned to get good fields of fire and cover, although with hindsight he probably could have stayed where he was and still shoot...? 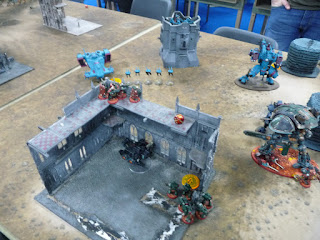 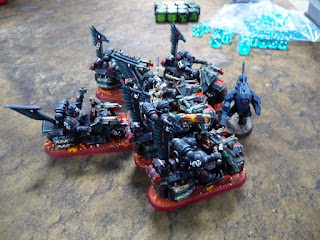 Black Knights managed to do some damage on the Ghostkeel, not sure how much but he killed one Knight in return. The Dark Talon also managed to wound the Devil Fish. The Stealth Suits in the centre looked to have been wiped out too, I think thanks to the Tactical Squads close by. I ended up with just the 1VP for holding objective 4 this turn. 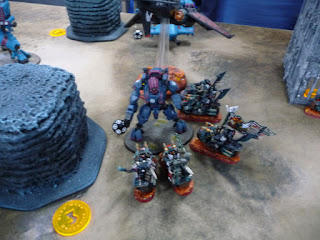 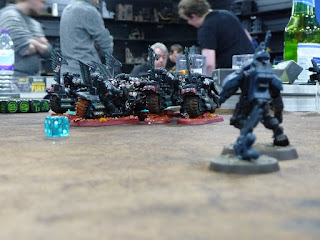 The Ghostkeels also jump out of combat and the Stormsurge anchors down to dish out the pain in his next shooting phase. Ian secures Objective 5 for 1VP 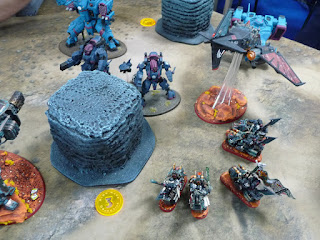 Ian had brought down a unit of Battle Suits beside the lone Stealth Suit. They'd targeted the Ravenwing bikes but I'd only suffered two casualties. I repositioned and returned fire, killing two of the Battle suits. The Plasma Talons of the Black Knights destroy their Ghostkeel, leaving them ready to assault the remaining one. The Dark Talon banked off, I still hadn't dropped it's Stasis Bomb, waiting for a bigger unit to make the best of the Mortal Wounds. Tactical Squad moves up and the Apothecary joins them. Ian has drawn a Warlord specific mission to capture Objective three so I have to put as many bodies on it as possible before the Taun Commander arrives by Aerial Deployment. The Imperial Knight prepares to multi-charge the Ghostkeel AND Stormsurge! 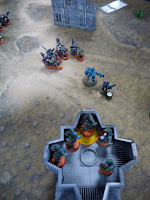 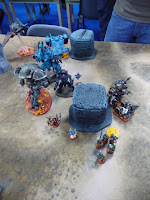 After Overwatch the Imperial Knight is on 18 wounds. Everyone gets into combat, the Stormsurge takes a licking from the Knight but isn't quite put down, equally the Ghostkeel survives. I score 1VP for objective 2. 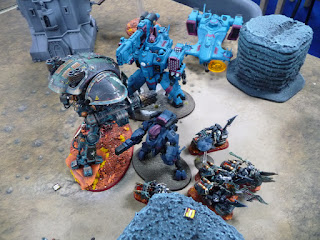 The Bike Squad surround the Battle Suit and Stealth Suit and still can't finish the job off on either of them. 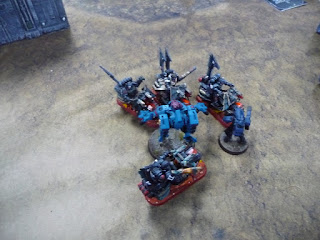 And thus they slip through their fingers yet again. Finally the Tau Commander arrives to offer them support, thankfully away from objective 3, where he needs to be but my forces deny access to it. 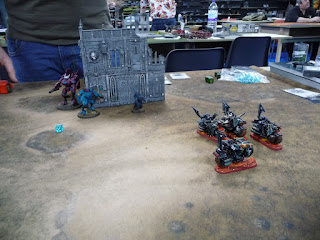 Instead Ian redeploys on objectives to guarantee Supremacy at the end of his turn. 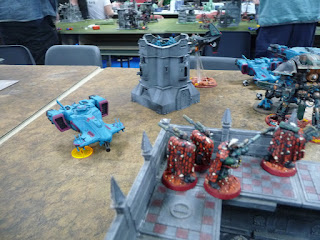 The Ghostkeel prepares to leave combat while the Breachers disembark to mow down the Black Knights as they become exposed. 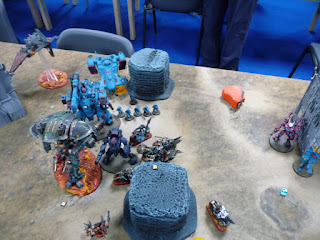 And they become super exposed, with not even their armour sufficient to protect them! Just the Huntsmaster survives. 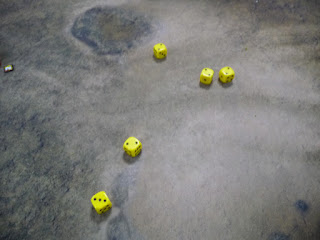 The Ghostkeel jump allows it to fire at the Imperial Knight, supported by the Devil Fish. Ian scores 3VPs from Supremacy so is winning 4 to 2, but is till holding the high scoring Warlord mission if I lose Objective 3 to him. 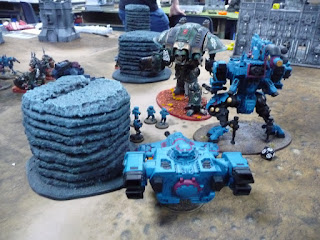 My turn 3 and I also draw Supremacy and alongside Kingslayer I have the cards to meet and overcome Ian's lead. Huntsmaster and Apothecary [down to 2 wounds] converge on the Tau Commander, the remaining bikers move to support and give options on those indestructible Battle Suits and Stealth Suit survivors. 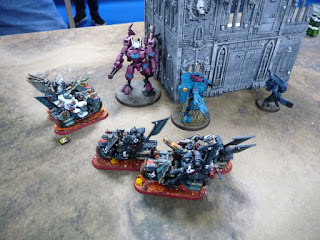 Tactical Squad surround Objective 3 with the Librarian, while the Techmarine repairs two wounds on the Imperial Knight. 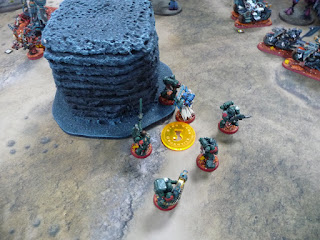 Who shoots the Stormsurge to pieces and then multi-charges the Breachers and Devil Fish. I split my attacks for the Chainsword on the tank and Titanic Feet on the Breachers but it's spread too thin and fail to achieve either goal of wiping one of them out. 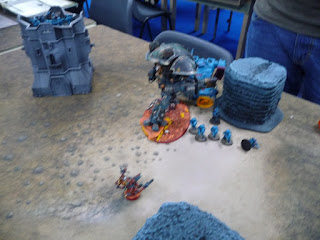 The Battle Suit gets picked off with shooting, the Stealth Suit lives to die another day. I charge and the Huntsmaster gets headshot on overwatch! Everything piles on the Commander but I cannot kill him and I fail with Kingslayer but secure Supremacy for 3 VPs. 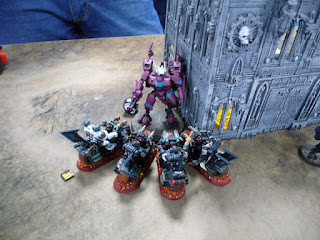 Ian's final turn and the Commander manages to kill the Apothecary for Kingslayer and scores 3VPs this turn to take the total to 7VPs for Ian 5VPs for me. BPs are 1497 to me, 550 for Ian. So, three games, three losses on VPs and three wins on BPs [which Ben was quick to point out is still three losses]. But I have never been so 'killy' and this game in particular nearly 75% of Ian's force was wiped out.

Given my practice game wasn't so successful I'm really pleased how this went down. My final position was 20th out of 32 but in truth I didn't even check where I came until Alex posted the results online. I honestly didn't care about the result, I'd had three of the best games of 8th I've ever had and as frustrating as the Maelstrom results are the effectiveness of my army list far outweighs what I feel is a relatively underpowered army.

It was another classic event and so long as Alex keeps running them I'll keep going. My only disappointment was forgettign to do selfies with Tom, Tom and Ian, how could I forget? Anyway, I'm looking forward to Double Trouble 3 next year where I hope to take my Genestealer Cult... I've got the painting competition to post up next, hotly contested as usual ;)