In preparation for Nevermind the Blog Wars, Ben and I had a practice game with our respective lists. My Dark Angels versus Ben's Astra Militarum plus Inquisition Warband. Ben got to choose deployment and opted for Hammer and Anvil but I finished deplying first which allowed me to go first [although we did roll off 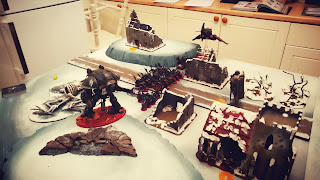 Ben had a huge amount of firepower arrayed against me but for some reason I was most terrified of the Hellhound... go figure? 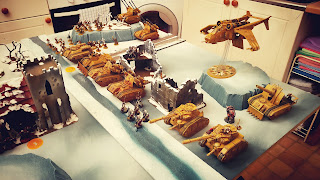 Those sneaky Ratlings appearing at the back of my DZ were an unexpected problem as well. 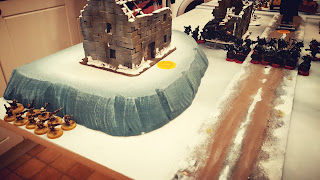 A problem that was easily solved thanks to my Land Speeder and the Tactical squad holding the objective. What they didn't kill broke and ran scoring First Blood. The Knight crashed through the ruined farm to use the bulk of the church to obscure it from the Leman Russ's 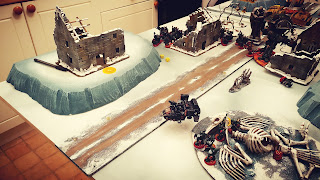 Dark Talon sped up the board, dropped it's Stasis Bomb on a unit of Guard killing a fair few while it's other weapons wreaked havoc on the remainder and Rift Cannon did some damage on a tank. I ended the turn with 5VPs because I'd got Supremacy [3 objectives] and Area Denial [nto to have anyone within 12" of the board centre - so easy first turn I did offer to put it back] 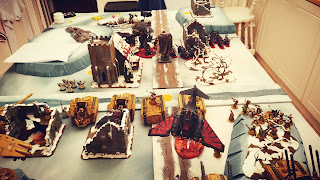 Ben's turn 1 and his Crusaders went for the Scouts. 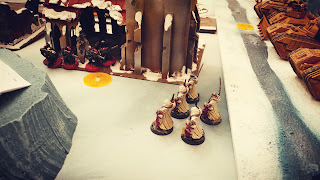 It runed out the Knight hadn't been quite as effective at hiding as it hoped. 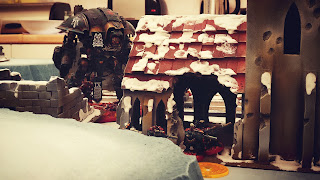 The Russ's could just about see him. 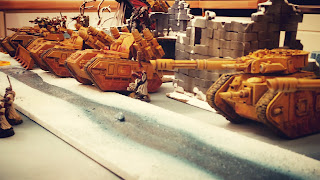 With the Dark Talon lined up in front of quite the array of anti-aircraft weaponry it suffered significant damage left smoking in the sky on just one wound. Still a threat Ben decided to let his Commissar take a potshot with his Bolt Pistol. There was a moment when I wondered was that such a good idea having just read Nick Throwers article on blessings in disguise. So he shot, managed to hit the damaged but still fast moving target, managed to get the wound and I typically failed the armour save but then this was the roll to explode! 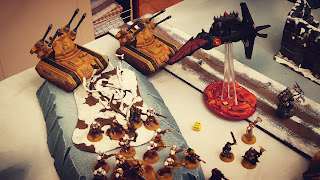 BOOM! Mortal wounds all round. 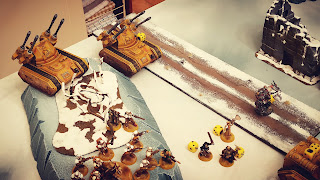 With the Leman Russ trained their guns on the Knight. 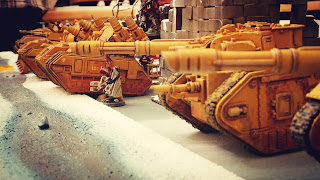 With additional supporting fire from the Vendetta. 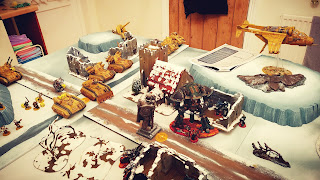 CRUNCH! The Knight collapsed in on itself, luckily not exploding next to all those Tactical Marines. The Wyverns were also particularly effective at culling many of the Ravenwing Black Knights 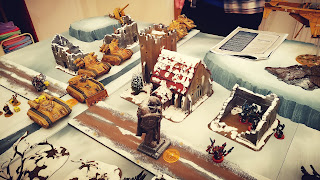 The Crusaders get into assault with the scouts and while I'm momentarily excited at my scouts extra attacks thanks to their combat knife. 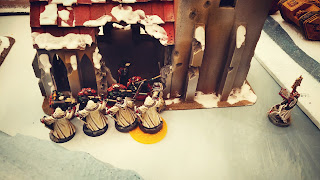 Before they're wiped out by the Crusaders powers swords. They pile into the church and hold the objective for 1VP 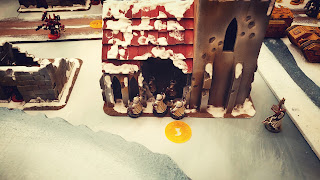 With just my Ravenwing Apothecary left from the Black Knights he charges the remainign guard unit. 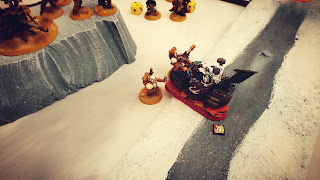 I'm not sure what else happened this turn, my forces were decimated, I think my dice rolling started to give up but I came away with another VP. 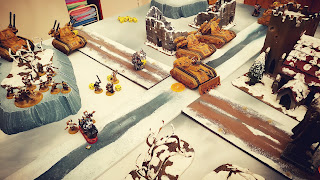 Ben threw his Psyker and Commissar at the Apothecary. 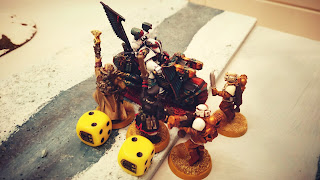 Their combined attacks sufficient to pull down the Medic who had 4 wounds remaining! 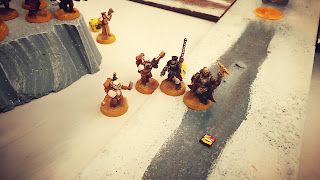 Despite my best efforts the Hellhound still remianed on the board and by the end of the turn Ben had scored 4 VPs and Line Breaker. So by turn 2 it was after midnight and I called it. 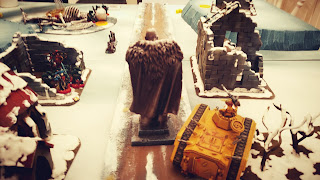 Ben had effectively tabled me, he'd won on Blood Points, I had very little left to counter him. It was 7:6 in VPs but he would have easily overtaken me in subsequent turns as I didn't have the cards or the man-power to score them. Funnily enough though, Ben was more disappointed than I was. The same issue remains - 8th is too brutal. Ben disliked Apocalypse because of that first turn wholesale cull of units. I think he felt a bit devastated when I took out the Ratlings and a chunk of Guardsmen, but compare that to the Knight, Dark Talon and most of my Elite Ravenwing. He may not have suffered those loses but he realised just how disheartening it can be to be on the receiving end.

Anyway, it is what it is, I'm thinking that perhaps getting into combat as soon as possible might be the best tactic, but even so I'm not sure that was possible in this scenario. It did make me realise that the Hammer and Anvil deployment was potentially the cause of my downfall >24" to close with the enemy was just too much, leaving me stranded and exposed to the weight of fire set against me. I'll be really interested to see how his amry fairs against the likes of Guilliman or Mortarion but all the tactics, orders and stratagems made his shooting devastating! I'll just enjoy the bottom tables again ;)
Posted by 40kaddict at 12:01