Nevermind the Blog Wars, Alex From the Fangs return to full scale singles tournaments, the friendliest of tournaments and the 7th event I've attended that Alex has organised [he'll start to think I'm stalking him next]. First game was with Tom Kendrick and his Orks. Apparently it was his second tournament as well.

The low down:
The initial deployment, cover was sparse unfortunately, aside from the four ruins there was only the Ork mudbath for me to hide my scouts in on top of an objective [just in case it popped up in my Maelstrom]. 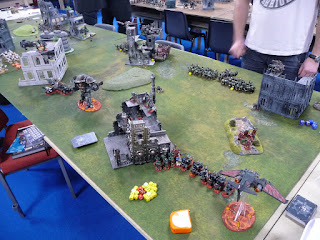 They were pretty close to all these Orks and Ghazgkhull too, which was intimidating. He had these two  big mobs of Boyz, a Weirdboy, Painboy, Ghazgkhull, Lootas, and an Ork Nob on a bike. 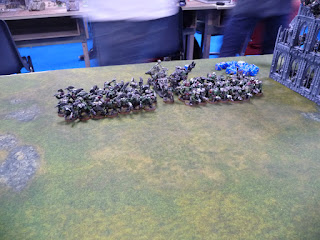 On  my left he also had another mob of Boyz and a Weirdboy, two big blasta guns [or whatever] on the tower, a Battle Wagon full of Tank Busters, and two Dakka Jets, one on each flank. 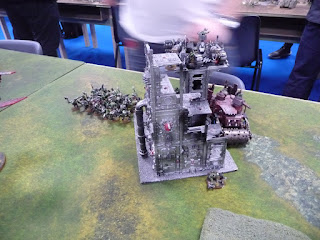 I had the Black Knights, Devastators and Land Speeder Typhoon [in the ruin] on the left flank to try and deal with them, while my Knight held the centre... 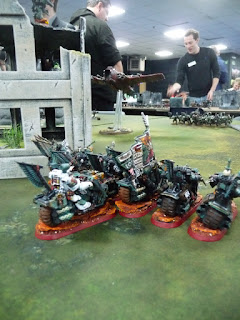 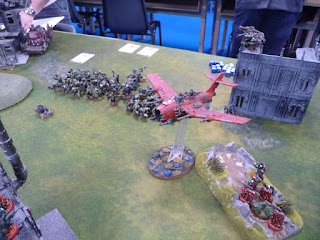 The left flank moved forward too. 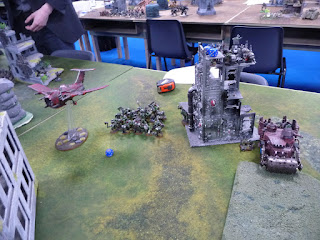 Then the Weird Boy cast 'da jump' and flung 20-30 Ork Boyz right up in the face of my Black Knights. The Dakka Jet, big weapons and Tank Buster blasted all their worth at the Imperial Knight, stripping  a load of wounds off it thanks to some pretty appalling dice rolls on my saving throws. But by the end of turn 1 Tom had failed to score any VPs. 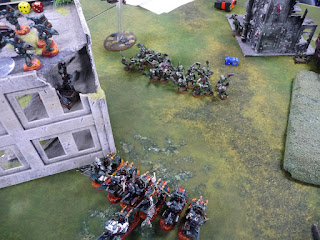 With limited experience I had no idea if charging the Boyz with my Black Knights was sensible or suicide. But killing a fair few with Plasma Talons helped reduce the overwhelming numbers of greenskins. The Knight went for the Battle Wagon, by this stage just on 5 wounds [whether from the previous round or after some lucky tankbuster overwatch], but he was pretty damaged. 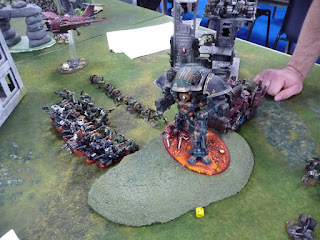 My Dark Talon had dropped it's Stasis Bomb on the big blob and I moved the remaining Ravenwing bike, Librarian and Techmarine to support the Scouts as I believe Tom needed to score that objective. At some point I kick myself for not shooting the Scouts at Ghazgkhull, Toms says to go ahead but I say no it's too late now we've moved into the assault phase. About five minutes later I suddenly realise I didn't shoot with the Dark Talon either. Thanks to dropping the Stasis Bomb in the movement phase I'd just figured I'd done it. But 24 Bolter shots on that mob of Boyz would have come in real handy, not to mention the Rift Cannon on the Dakkajet! You live and learn 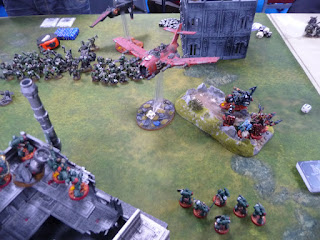 The end of the turn and the Orks suffered so much damage the failed their morale and amazingly the Ravenwing had seen them all off. Meanwhile the Knight is now on three wounds. 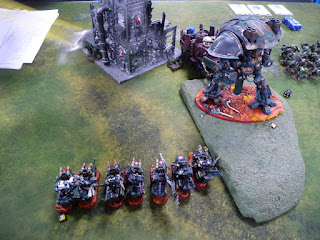 The Dakka jet zooms past the ruins. 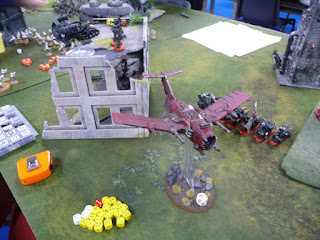 His partner coming in from the right for a side by side pass. The Battle Wagon falls back, meaning the Tankbusters thankfully can't shoot the Knight but opens it up to attack from the weapons platform, that promptly whiff! 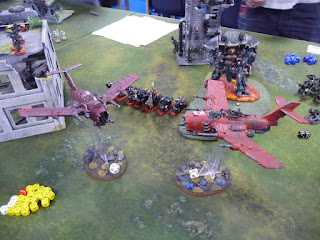 Boyz line up on my spirited but outnumbered defence of the mudbath jacuzzi. 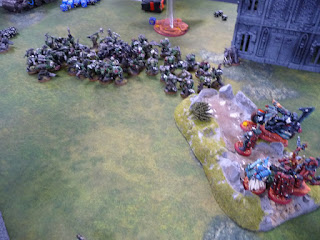 And get swamped, in both senses of the word. The Ravenwing Biker gets chopped down and all but the Scout Sergeant. Techmarine and Librarian survive but not enough bodies to stop the Orks claiming the objective which thanks to another objective scored meant Tom walked away with 4Vps this turn! 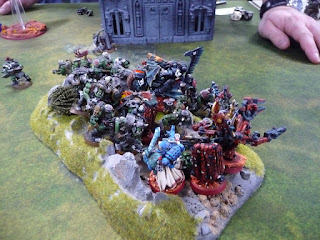 Tactical Squad with Flamer move up to support the remaining guys in the mudbath. 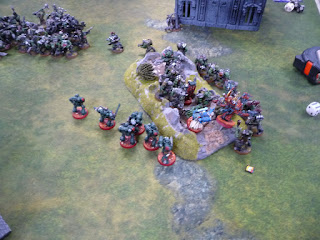 My Black Knights move up to secure an objective at the base of the ruins and the Dark Talon Zooms over. Shooting at the Battle Wagon destroys it. 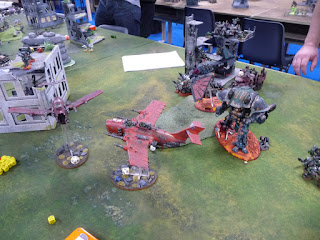 The Tank Busters now out in the open among the smoking wreckage of their Battle Wagon. 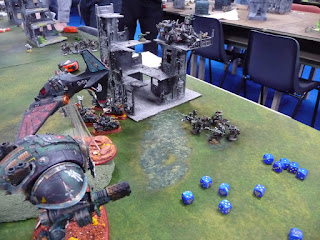 Moar shooting at the weapons in the towers. 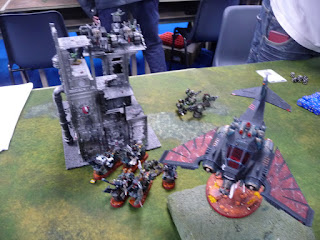 Lots of shooting at the Dakkajets but I can only reduce them to 2 and 4 wounds, which still gets me half Blood Points each, but I was close to getting full points on both. 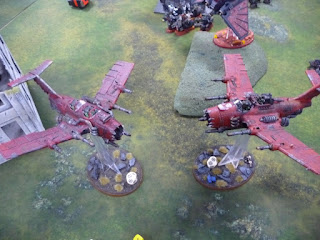 With the Battle Wagon gone the Knight charges the big mob of Boyz, stomping with his Titanic Feet. I'm not sure how it ended up, but I think his feet were a lot greener by the end of it. 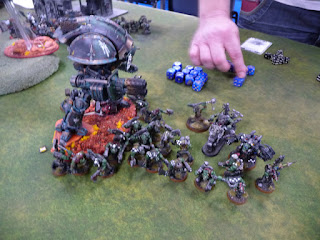 A big melee took place in the mudbath, making it more a bloodbath. No idea how it ended up either but ultimately I scored 2 VPs this turn. The we ran out of time I think. 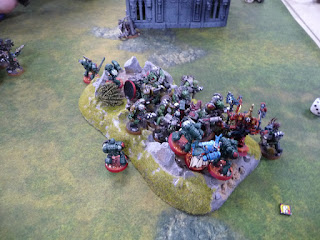 This was a really great game with Tom and felt tactical and unlike many of the 8th edition games I've played so far. I lost on VPs 4-2 but somehow won on Blood Points killing 700pts+ compared to losing just 532. I must kick myself for not shooting the Dark Talon, he might have had a decisive impact on the game with his 24 shots but winning on Blood Points was a 'win' for me. I surprised myself by thinking that was all I needed to consider the whole event a success regardless of what was yet to come!

If you're interested in any more of my Battle Reports, point your cogitators here: www.40kaddict.uk/p/battle-reports.html
Posted by 40kaddict at 12:53