While I've been busy playing games I've been far from idle, flitting from one thing to the next but most of my projects came to a conclusion with AoP and those that are 'ongoing' didn't immediatley catch my attention, the Rogue Trader Predator and Rhino have just started to take my interest but before that I needed to build some stuff. One of those things was a long ignored, almost forgotten Forgeworld Trygon, with no reason to play the plastic one I already had there was never a reason to tackle this. I'd also been put off by the many tales of it's difficulty. 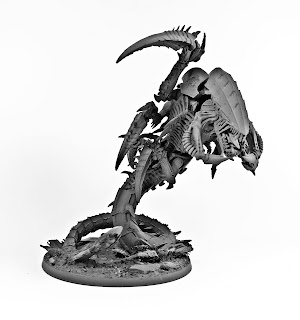 However, Trygons are now cool in 8th and although mine tends to get shot to pieces reports of multiple Trygons [plus tunnel units] swamping your opponent being effective made it worth my attention. At the very least getting it built puts it in the realm of possibility and in particular using it to create a slightly more dynamic pose than the plastic version. In actual fact making the pose, so the tail was raised was the hardest part of the build. Interesting BW filter effect too, almost looks like a 3D Studio Max render. 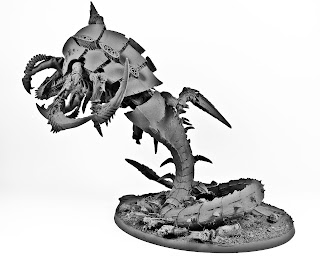 While I was at it I finished basing the magnetised Space Hulk Broodlord. Sadly, I didn't go for a load more skulls on the base. I actually have a spare Space Wolf wolf skull I could add but the broken pipe with slightly over-sized joint came out OK to try and already ties both bases together. 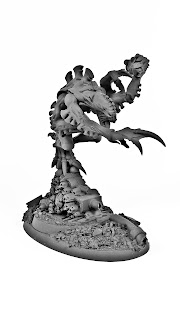 And it's detachable so I can use it in Space Hulk [should I ever get round to playing it] and DeathWatch Overkill too. I'll probably do the same with my remaining Patriarch from my second Overkill box. Next up I should probably look at What's On My Palette so I can manage my projects... 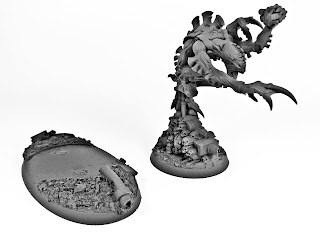 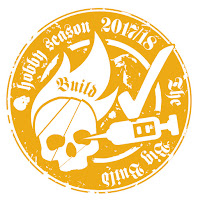