Armies on Parade was a month ago and I never really debriefed, mainly because as the event unfolded the actual result became less and less relevant to me. Leading up to it my belief that 'taking part' was reward enough was posted many times on Facebook where folk seemed disappointed not to win. Winning is a welcome but purely incidental part and as much as it's nice to win the 'hobby should be the winner' [© Toby Liddiard]. I saw plenty of examples of the best of this spirit during the weekend of the Parade, I also saw examples online of the very opposite, folk bogged down over arbitrary self-imposed rules or dismissing entries because it didn't fit what they perceived as an 'Army'. It was quite depressing actually, but I reminded myself this was the minority and promised myself I would eventually write a feedback letter to GW to hopefully move things forward in a more positive direction.

As you recall I entered twice and no this was not 'against the rules' as someone questioned me online. I think perhaps he thought I was hedging my bets, which would be true if I was intent on winning but not entirely true when my second choice store is renowned for it's hobby quality. That's like competing in a local Sunday league football match and also having a crack at the FA Cup final so you have greater chance of winning!

The Southport store had just five entries so the categories were reduced to Young Bloods [of which there were ony two elligible], Best Painted and Best Themed Board. First up was this Raven Guard/Custodes army that was really cleanly painted. 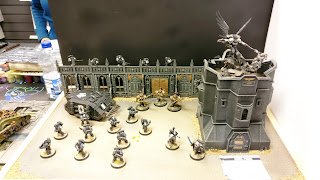 I really liked it and gave it my Best Painted vote. Amusingly the store manager suggested I could indeed vote for myself - to which I refer you to my recent politician comment! 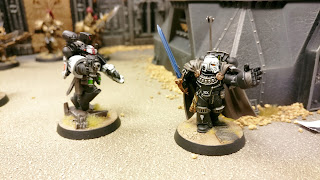 As you can see it was nicely executed. 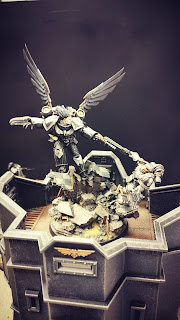 Simple, but really tidy and effective. 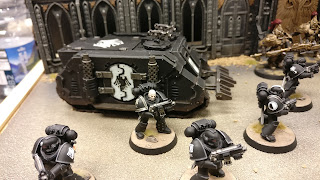 Anda a bit of terrain at the back for a nice vantage point. 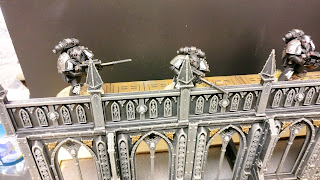 Next an Imperial Knight and Ad Mech force. 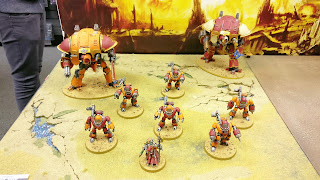 Then a Tau army that was one of the Young Blood entries. 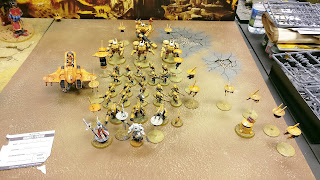 It was really quite a nice effort for a youngster. 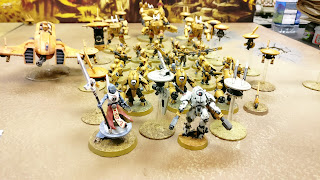 This was the other Young Blood entry a well realised Death Guard force. 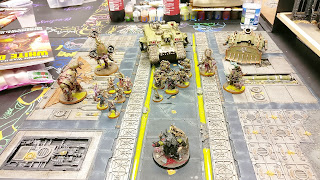 The quality and effort got my vote for the category and I was left to choose best theme. As much as I liked all the entries I kept thinking my own theme was truly the best there. 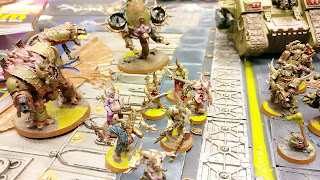 But, I don't vote for myself, so I voted for the Death Guard as this City Board had the most effort put into it. 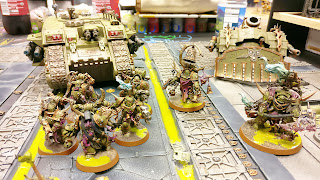 Now I'm sure you're interested in the result and it would transpire that the Raven Guard did indeed win the Best Painted and the Death Guard did win the Young Bloods, but the best Theme was... 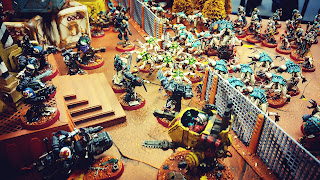 ... a tie! Mine and the Death Guard. The Manager eventually shared  pictures of the two boards with his colleague to cast the deciding vote. 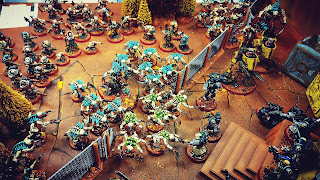 I was half a mind to happily concede at this point because I could see it meant more to the Young Blood than it did to me but luckily she chose in his favour anyway and what a potential impact on his hobby that success will bring him no doubt. 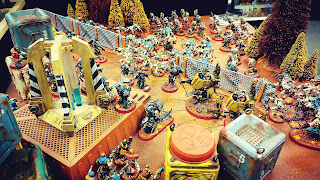 I think the kid with the Tau was disappointed I didn't win saying he thought mine was the best and the subsequent discussion about Armies on Parade was the highlight of the day as I hopefully convinced him of my view of the spirit of the event. 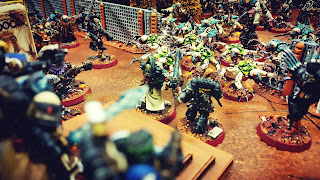 But my Parade looked much better than I'd hoped and without AoP I'd never have got these pictures. 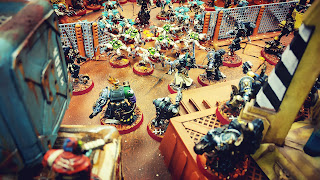 Also of note is their store front display which looked pretty impressive. 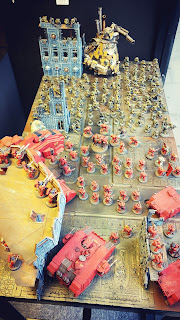 And the amazing calligraphy work in their hobby areas. 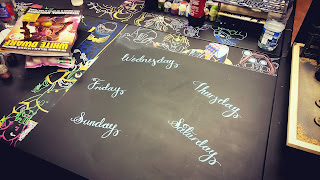 Not to mention this cheeky chap! ;) 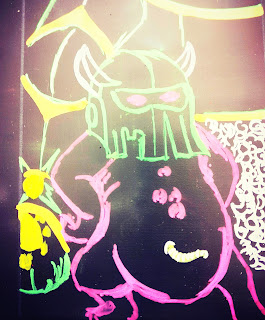 Now, to Manchester and despite the last-minute reservations in Parading there the team really tried to accommodate me in the end, for which I'm truly grateful. Sadly, I only got to see two other entries [which were by members of staff] when I returned to collect the Dark Angels. There was this mixed Age of Sigmar force. 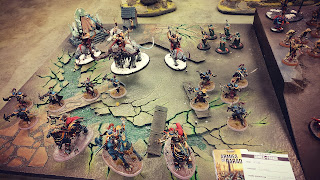 Which was undeniably impressive 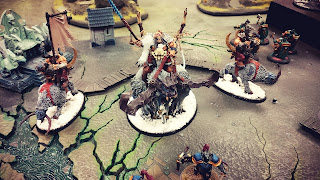 Part of me feels the need to do a Sigmar Army just so I can take part in this category as it seemed there were very few entries during the Sigmar week. 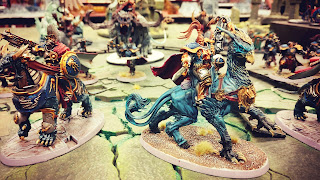 And then this Chaos/Blood Raven Dawn of War showdown. 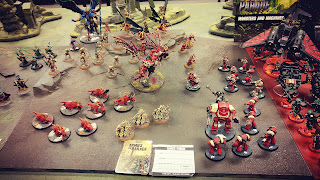 Gabriel Angelos facing down [up?] a Bloodthirster! 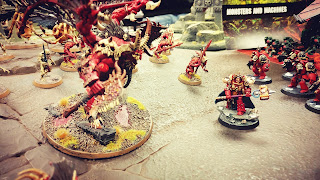 Oi, where's he nicked that Mace of Absolution from, thieving git! 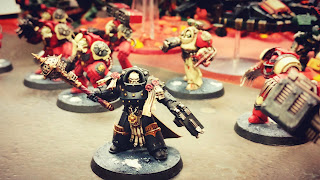 OK, so I won a couple of awards - Best Monster/Machine and Best Painted but the certificates were the only prize I got so just to put it into perspective I lugged a double hobby case, an aluminium hobby case and a board and backdrop on three consecutive hour long train journeys to work. Then I carried them 20 minutes across Manchester with a friend and spent a further 30 minutes setting them up. 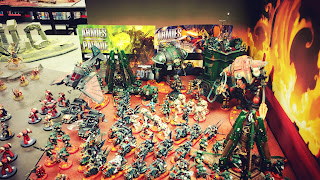 I then had to do the entire thing in reverse. I am extremely grateful for those that voted for me and honored to win, but if anyone thinks the primary motivation for this double effort is the two certificates at the back, then they're missing the 2'x2' expression of my hobby in front of it. I may have belaboured this point, but look at this way when we think back to the Cold War and all those Red Square Parades of Soviet weapons and armour, does anyone remember the bit where some guy won something at the end? No, you remember the endless sea of marching soldiers, freshly painted missile carriers, tanks and vehicles - the might of their army on display. This is the same, this is 40k Armies on Parade, not '40k Armies Winning a Prize'.

Next year, Parade your Army and damn the result!
Posted by 40kaddict at 12:11