Next up was Thomas Capper, he and his brother go to loads of the local events but this is the first time I've faced him. I was actually quite pleased about this as I figured he'd be pretty clued up on the rules so might speed things up and help iron out my lack of knowledge in the Dark Angels - he was running Blood Angels so there was overlap in equipment stats at the very least.

The low down:
I pretty much deployed across my DZ, Knight in the centre, bikes to it's right, Dark Talon it's left. 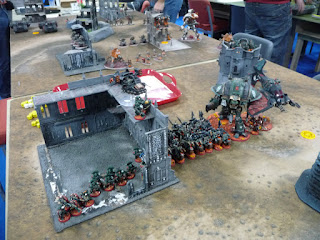 Thomas had a couple of Rhinos with Death Company in, a load of Scouts, a Baal Predator and a Predator Annihilator, Librarian Dreadnought, Mephiston and Sanguinary Guard. I didn't take any more pictures of Thomas's turn but he scored 6 VPs thanks to Supremacy (2VPs) and Priority Objective 4 (4VPs) which he was sat on top of. So I had a real challenge on my hands. 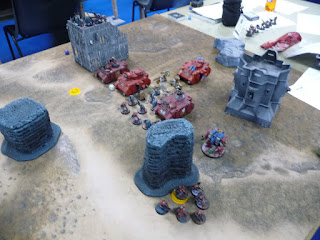 My turn and I had drawn Objective 1 twice, I don't recall where that was but I could score it with ease. Which left me to try and deal with the Scouts and the Dreadnought. The scouts got shot to pieces and I got the Black Knights into assault with the Librarian, unfortunately the Apothecary couldn't keep up. 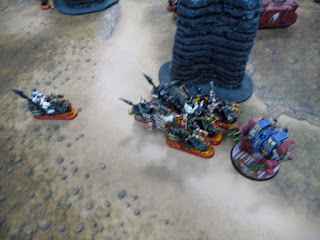 The Biker Squad went for the scouts int he centre of the battlefield. 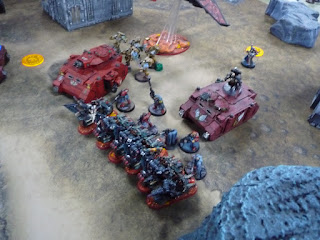 The Dark Talon dropped the Stasis Bomb on the Sanguinary Guard - it killed one and wounded another, I hadn't realised they had 2 wounds each [or a 2+ save!] no wonder it was 306 points for the squad. Mephiston was holding that objective backfield [for which he'd won 4 VPs for Thomas]. But it also blew up the Predator Annihilator. The Rift Cannon did 6 Damage and then a further 3 Mortal Wounds with the Rift Vortex. It must have had damage from something else as it's no longer in play. 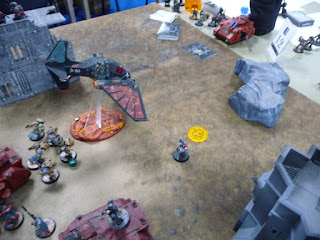 The Black Knights hacked at the Dreadnought, I did some damage but not enough to end it. 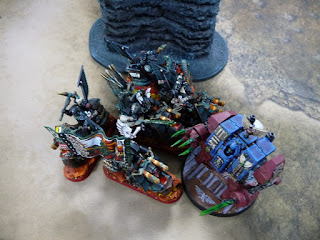 One of the Rhinos got popped and his tactical Squad got out. 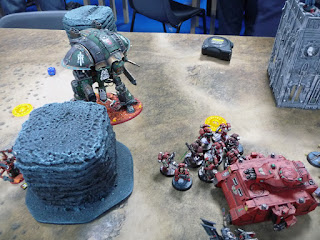 The Dreadnought hit back and left all but the Huntsmaster and another Black Knight [Banner just for show] alive. 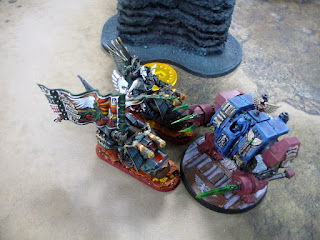 Thomas's turn 2, the Tactical Squad rounded the central rock formation. My Techmarine had taken cover behind after suffering wounds in the first turn. 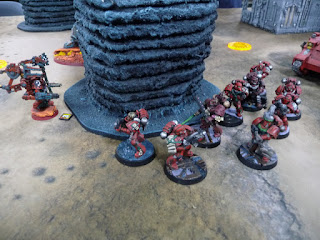 The Dark Talon looks to have been obliterated, I think close shooting from the Inferno Pistols of the Sanguinary followed by being assaulted by them - there's not much it can do against a Power Fist! 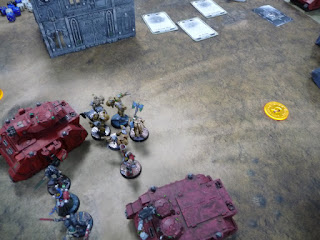 Mephiston moved up with the Death Company who wiped out the Ravenwing bike squad with ease. However, he still had three units in his DZ for Hold the Line and 1VP. 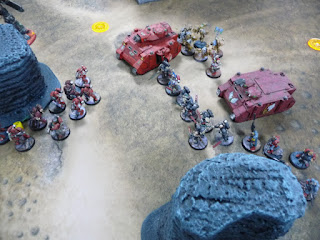 The Dreadnought couldn't stand the Corvus Hammers, it was on 2 wounds and I think I used two Command Points to attack first killing it. I needed objective 5 in my turn, so now it was secure. 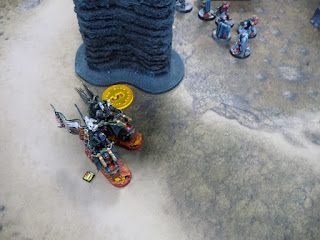 The Baal Predator succumbed to shooting with the Imperial Knight bearing down on the Sanguinary Guard. 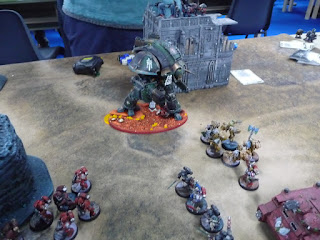 More shooting took out most of the Tactical Squad and the Techmarine and Librarian assaulted them to blunt their advance. 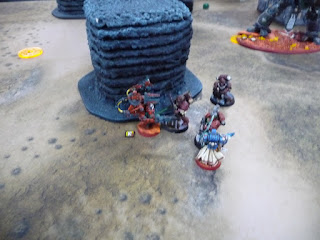 I managed to kill at least one in combat, whoopie do! 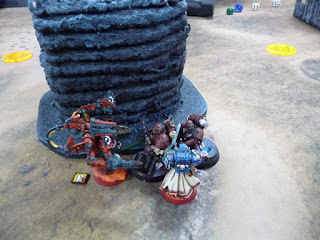 The Knight managed to kill four of the Sanguinary Guard, I think with his Reaper Chainsword. 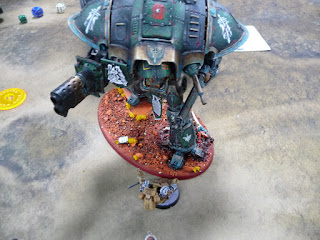 Thomas's turn and Mephiston took out my two HQ's although the Librarian had initially denied his 'Blood Boil' power. Meanwhile the Death Company got to grips with the Ravenwing Knights as they had to secure Objective 5 and needed to outnumber the Ravenwing or kill them to do it. 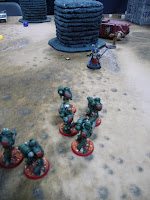 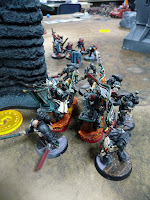 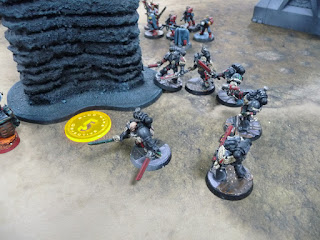 My turn 3 and I draw Kingslayer - Mephiston must die. but I have a bucketload of Bolter shells, a Knight and my Warlord to do it. I sweep the bike round so it can try to take out the Sanguinary Guard if Mephiston falls to the other elements. 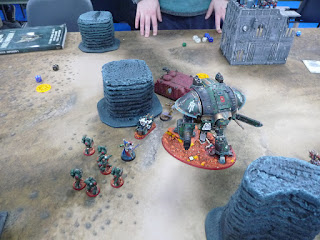 The Knight and Tactical Squad kill Mephiston for 1 VP. 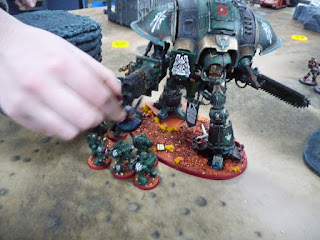 The Apothecary assaults the Sanguinary Guard. 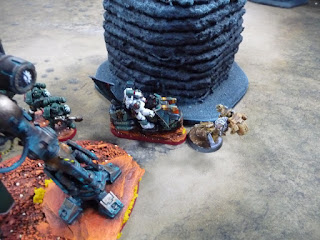 but without and 6s on his Corvus Hammer the Guard shrugs off the attacks and punches him with his Power Fist killing him outright. 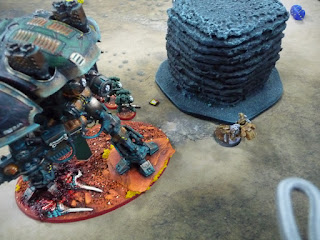 We run another turn each where Thomas secures objective 5 again and I secure objective 3. The final score is 9VPs to Thomas, 5Vps for me but 1361BPs to me and losing 1082BPs. So another loss on VPs but win on BPs, practically unheard of for me but again a very tactical game and far more rewarding 8th edition.

One other point of interest was Thomas pointing out my Plasma Gun toting Ravenwing biker could fire both his twin Bolt Guns and his Plasma Gun, which I could scarcely believe. You see, I knew Thomas would know this shiz. But then I started to think, why can't they all fire their Bolt Pistols too? Well it would appear that there's an answer to that question and gosh darn it, it's only in the rules. Pistols specifically state the model may either fire their main weapon or the pistol, that's it. I'd even had a moment where I reverted to 7th and was of the belief I couldn't charge having fired the Bolt Guns because they weren't Assault. OK, so the rules are anaemic in places but quite often the rules are right there, or if they're not there, then they don't exist! Of course the Bolt Pistols also mean I could have had a round of shooting while the bikers were locked in combat, which I forgot. #stilllearning

If you're interested in any more of my Battle Reports, point your cogitators here: www.40kaddict.uk/p/battle-reports.html