A week or so before the NWO I got a last minute text by Ben to come and have a game. Somehow the planets had aligned and both he and Otty were on leave at the same time and he'd managed to get Scott and Liam to come down as well and was going to set up a game - 8th for everyone! I didn't quite understand what I was supposed to bring but he insisted on my Dark Angels so I rocked up with around 3,500 points and only had 660 allocated to me which I resolved in the form of my Dark Talon, Imperial Knight and a Techmarine. Ben had some of his Guard and Liam brought in some of his Crimson Fists [I think with Pedro]. On the other side Otty and Scott had some Aeldari - the Wraith Knight and Avatar being of particular concern.

I never intended for this to be a battle report so didn;t take too many pictures but did want to record some of my feelings as the influenced my feelings of 8th going into the NWO. A lot of this has been adressed in the comments from the NWO reports but at the time I'd gone into the game with my own [limited] experiences and initial tournament feedback reporting those who went first had a 75% chance of winning the game. With my loathing of the Alpha Strike [both on the giving and receiving end] it was a mixed blessing that we stole the initiative on the reroll. This allowed my Dark Talon to fly forward and drop it's Stasis Bomb on the Dire Avengers - Mortal Wounds on a 4+... I think 7 died and then Morale killed the rest. I felt pretty crappy about it, usually I play for First Blood, trying to get a unit killed with the likes of Ork Trukks, Rhino's etc. as an easy kill that doesn't make your opponent feel like they've lost the core of their army. Dire Avengers weren;t too big a loss but it still felt mean. 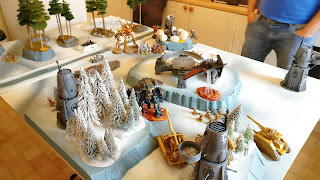 Subsequently the Wraith Knight moved to intercept the Vanguard squad in a Drop Pod and took great exception to my Techmarine,

blasting him into atoms. 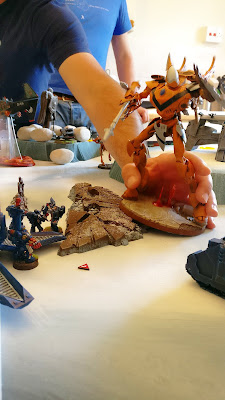 in return I managed to recreate the Dawn of War 3 trailer and charged the Imperial Knight at the Eldar equivalent. Against Liam's advice I split his attacks, with I think 3 from the Chainsword and 1 from his stomp. I figured a mix of few but deadly, plus some extra shots with less damage would give me the best odds of killing it outright. I was close leaving the Knight on 1 wound... 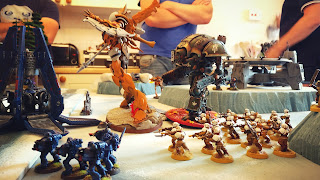 The Dark Talon continued to zoom around wreaking havoc. 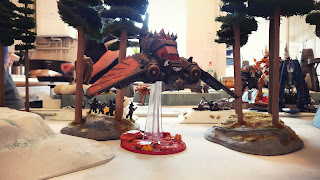 The Wraith Knight hit back at the Imperial Knight and despite all the damage it had suffered showed just what a beast in combat it could be... 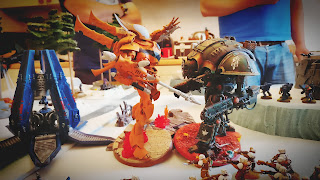 slaying the Imperial Knight before I got to kill it off. I guess Liam was right about using the Chainsword afterall. 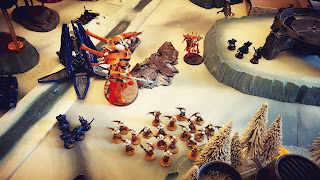 I can't remember who won in the end, but the Knight battle symptomatic of my issues leading into NWO in that despite trying to hedge my bets by splitting the attacks I was in fact just being less ruthless. Following the Dark Talon wiping out the Dire Avengeys I spent the remaining game feeling a little dejected.

I know the point of the game is to take out units but Eternal War missions are only 1/6 about killing your opponent, the rest are objectives and being able to win a game by playing the objectives has always been my favourite way to play. I know some see the best way to secure those objectives by removing your opponents army to make things easier but most times you would both be playing the same way.

At this point 8th just felt like you HAVE to take advantage of that Alpha Strike and cripple your opponent otherwise you can be damn sure they'll make you pay for not making the killing blow when you had the chance.

My opinion has changed since then, ironically my last Purge the Alien game with PeteB made me feel a little less dejected - I mean if the whole point is to kill units you feel less bad about it, it's more honest at least. Ultimately this was just five guys playing 8th, some for the first time, getting to know the rules and explore the mechanics. It's still new and firghtening in a way but we'll get there in the end :)