I've carried some momentum from last season into this season so far, although I wonder in future if I should have some specific down time between seasons? The momentum has been rather sedate and measured, no pressure, just highlighted all the black on the Deathwatch with Incubi Darkness [my new favourite Citadel paint, seriously you should have that in your collection if you want to paint black]. 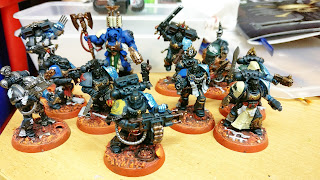 I was getting through the highlights three marines a session [1-1.5hours] which feels slow but it was deliberate and planned that way so at n opoint did it feel tedious. Once I'd done the first highlight I realised I needed to block in all those other colours - chapters, purity seals, bone elements, leather pouches etc. 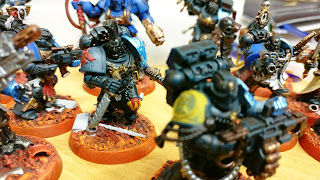 The amount of times I'd then find a purity seal that was missing it's wax was infuriating. But the process revealed I need to batch all the consistent elements - black and metals etc and then having blocked in all the individual colours can apply shades then complete the black as a batch and then I will do something unique for me and paint each model individually with it's chapter elements through to finishing the bases and varnish, which I'll batch again. 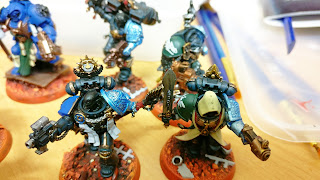 It's going to be quite the challenge, I've found a few other distractions recently that has slowed progress but I'll get my head straight and focus more soon. The original plan was to find a way to speed paint these but I've only ever done that with my Hobbit Goblins so I'll just stick to what I normally do. I also threw in the Deathwing Librarian into the mix [hiding in the back] just because everything else is varied it doesn't seem like a huge stretch to include him as well and conveniently that's 2 items from my To Do List! 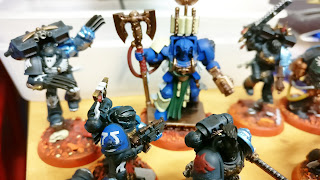 I've not ignored the White Scar biker either. I have to say it's the least appealing element of the whole task but I'm pushing through the task. 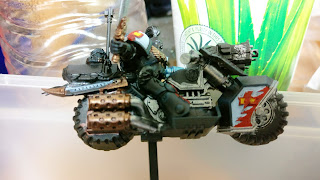 Just a side view of their silver Deathwatch arms. I did the original test back in March, silver with a Bahama blue wash. I'm going to do a little drybrush or pick out some highlights so it's less blue in places. I may even add some black wash in the darkest recesses as well, just for definition. 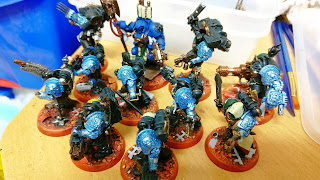 So, good progress and something new to look at on the blog.
Posted by 40kaddict at 12:14