For a variety of reasons [life, hobby, a burgeoning passion for Bolt Action] I haven't managed to arrange many games with PeteB this year but we finally changed that with our first game of 8th edition together. I always hoped his understanding of Age of Sigmar would help us through the teething stages of 8th and so this was more like the early games of other editions where we found our feet and 'learned the game'.

The low down:
Pete's deployment was a symmetrical line of Fleshhounds, backed up by Chaos Spawn on either flank, with two units of Bloodletters with Heralds in the centre and a a Daemon Prince of Tzeentch masquerading as a Khorne DP in the middle.
I went with 18 Genestealers, Broodlord and Carnifex on my right flank, Carnifex and Tervigon on my left with my 30 Termagants [7 Devgaunts, 23 Fleshborers] holding the centre in cover. Everything Advanced forward but I suddenly realised the Genestealers were now ripe for Pete's turn and being gnawed on by the Fleshounds. The only thing to do was attempt the charge - it was 11", so needed 10, rolled a 6 and a 1, used a Command Point to re-roll the 1 and got 5. 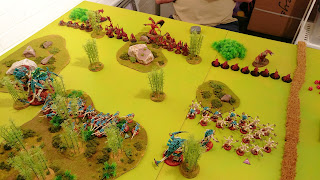 They made it and promptly sliced through the dogs but I immediately learned that such a move puts you out of the buff range of the Broodlord - no +1 to hit, no immunity to morale... 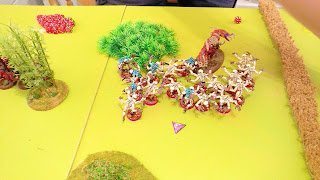 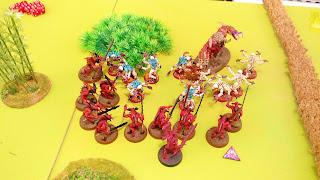 Meanwhile my Carnifex was surrounded and taken from 6 down to 2 wounds and the Tervigon was taken to 8. Pink Horrors also appeared out of the aether. 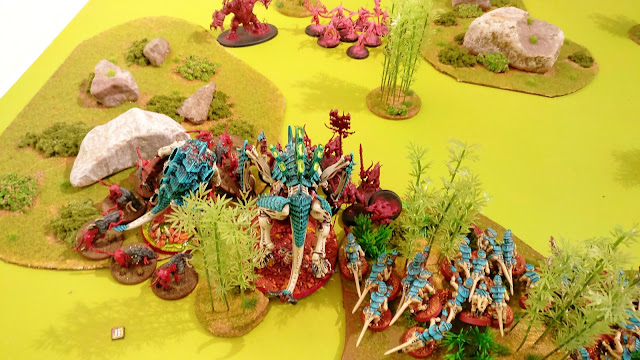 My turn and the Broodlord and Carnifex reached the melee, scything and rending through the Bloodletters while the Broodlord buffed the Genestealers. I had to choose which unit to fight first after the charges - Stealers and get 4 attacks on all three units in the melee, or sacrifice the potential extra attack if the Spawn and surviving Bloodletter killed just 1 and fight with the 2 wound Carnifex facing the Fleshounds on the left flank who would likely die before getting to attack if the Stealers went first. The extra attacks and ability to kill three units meant I went with the Stealers, wiping out all but the Spawn 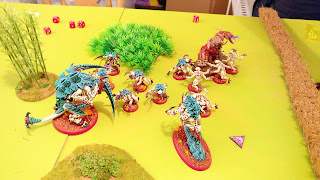 The Spawn still lived but he was severely wounded and left holding the flank alone and now surrounded by 10 Genestealers. The Carnifex somehow survived anyway, taking a Hound with him. The Tervigon was also able to kill the last of the Bloodletter, thanks to a particularly visions Smite that killed 4 [or 5], to leave just 2 to kill in combat. However, the Daemon Prince now wanted in on the action. 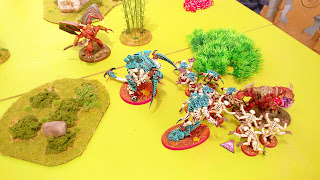 Horrors charged the Termagants, suffering a few deaths to their living ammunition overwatch. 8 termagants died in the combat but with the Tervigon still on 8 wounds they would be reborn. The Spawn also ambled forwards but wasn't able to make the 6" charge. Carnifex and Hounds remained in combat with just 5 Hounds left now. 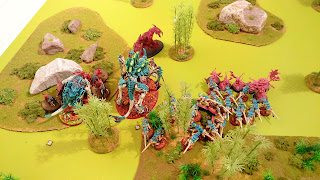 The Daemon Prince was only able to wound the Carnifex twice. I threw the Broodlord at him - taking off a fair few wounds but that was a mistake as the Prince attacked back causing 8 wounds on the Broodlord - killing it and removing his buff Aura and Synapse. This left the Genestealers to kill the Spawn the hard way and consolidate towards the ongoing combat. All this watched by some Ripper who turned up to gloat on the board edge. 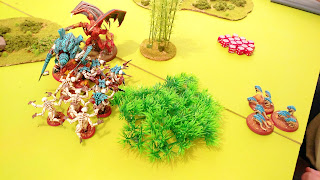 The five hounds continued to harry the Carnifex, forcing me to make at least three out of four 4+ saves. 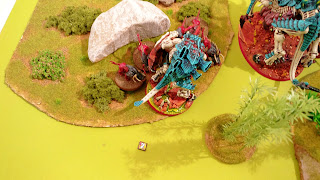 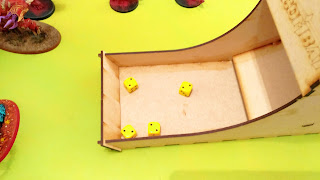 The Carnifex was gone, answering the question 'who let the dogs out?' - it was the Carnifex. Unfortunately the Horrors also failed their Morale and the remnants of the units disappeared back into the warp releasing the Termagants who were back up to a full brood of 30. They threw all their shooting at the Spawn felling it. 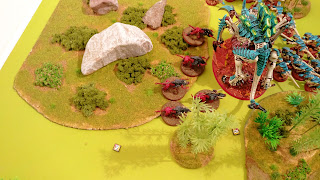 The Stealers surrounded the Damon Prince [who'd spent the last turn doing another 2 wounds to the Carnifex]. Reduced down to 9 stealers and therefore 'only' making 3 attacks each it still could survive the 27 attacks and was slain. 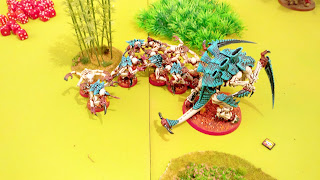 This left four remaining Fleshounds facing the Tervigon, which is where we called it. 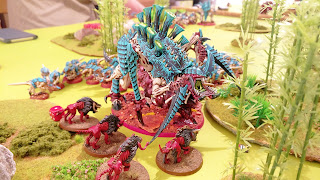 Obviously the game went really well for me and it was a perfect example of how the aura effects of having buff characters in proximity to their 'buffees' [the Daemon slayers] works well. Pete made some conscious decisions to make stuff happen, setting some of his units against the Genestealers when he knew they stood no chance so this definitely felt like a 'training' session. I still feel bad about taking out the Fleshounds first turn, I think that reroll alone for the charge won the game as the other Hounds lasted much longer against the Carnifex and ultimately killed him. However, Pete did point out the Stealers went through more than half his army so getting the right target for them is key and ensuring the Broodlord stays alive to keep them hitting on 2s is vital.

I feel slightly more positive because I know have a better understanding tactically, which was one of the issues at the NWO. It doesn't completely overshadow the fact I practically tabled Pete to do it, granted it was a kill points game, which means your priorities are simple but even so I want a close game where we both feel we had chances and fought hard. The other consideration is that this was against a combat orientated list, I wonder just how it would have fared against something shooting it across the table? Although Pete did claim his Daemons had been awesome against Tau so perhaps there's little to fear. Anyway, a lot to think about and certainly more to explore using this type of list.

If you're interested in any more of my Battle Reports, point your cogitators here: www.40kaddict.uk/p/battle-reports.html
Posted by 40kaddict at 12:03