'nids part 224 - Genestealer Broodlord/Patriarch - Magnetising all your base

Yo, yo, yo, folks, coming outta left field something [almost] completely off list I have a Space Hulk Broodlord that I've been wanting to get painted for a while but given the variety of base sizes and purpose of the model - 40k/Space Hulk/Deathwatch Overkill I wanted to magnetise the base for versatility. 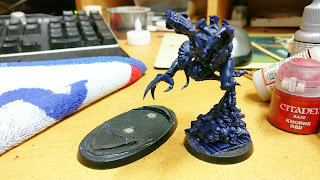 So far I've done my Death Storm Broodlord and Overwatch Patriarch on the bigger oval bases [though I'm not entering into the new base sizes for Carnifex]. However, the oval doesn't work in Overkill and certainly won't in Space Hulk [should I ever have the urge to play it]. So I decided to mount this one on a 40mm round base with magnets and a separate oval base that it can attach to. I also started to build up the surrounding oval with mounting card so it doesn't look quite so 'stuck on'. 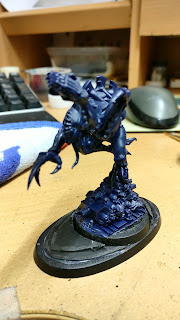 I even went to the trouble of filming it, those Magentix magents are just extreme, notice how the sound seems to happen before the magnets snap together - fierce. I probably could have gone with smaller magnets on the base [next time].

I then had some filler handy, which a squeeze started to smooth out the transitions on the mounting card. Post application I realised I'd thought this was tile adhesive, which would have been a better choice perhaps, far more durable. 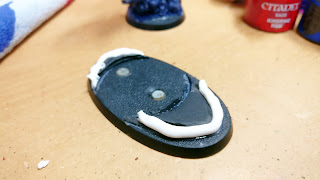 However this stuff was really easy to smooth into shape. I've since added some more to the top to make the transition to the round base less pronounced. I'll be adding a bit of rubble on top anyway and the remains of the broken pipe from the Broodlord's display base. 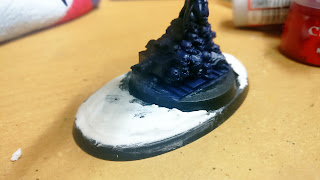 I should probably even get some of those new skulls to try and continue his base theme but this has been one of those tasks that has long been in thought only and it took just a little effort to move it forward, five minutes here and there before starting my Deathwatch sessions and I'm then looking at getting it based and primed. This is definitely a model that can be painted between 'real' tasks just to add something familiar, comfortable and end up with a cool model when it's done.
Posted by 40kaddict at 12:38