Deathwatch! - Patience is a virtue

I'll be honest, I'm getting a little tired of these. Every night an hour, hour and a half and there still seems so much left to do. As Marcelis says though there's the law of diminishing returns though and I'm of the opinion to just let some of this stuff go. Of course then my OCD kicks in and I feel like I've let myself down by not doing the best I can, but time is running out and if I want any chance of completing the Sentinels for AoP I have to get onto them ASAP. I think at this stage I may well have abandoned the new board, sadly.

Anyway I've inadvertantly split Kill Team Cassius in half, completing the black highlights on these and in an effort to move things on may not even bother with tidying up the line highlights with some additional black shading asI'm not sure it adds anything. You can see from Garran Branatar I followed up on my decision with Green lenses. I still need to done down some of the metals, add the flames and pick out a few details and then it's edge the base and varnish. 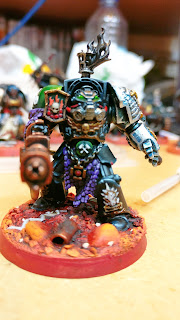 Zameon Gydrael is next and as you can see I've tied it into my Dark Angels by having the weathered brass and bronze. He may well join my Veteran Squad should I ever get round to deciding what weapons they're having. I'll have gone through 3 Codices and an Index without settling on something, maybe just the rule of cool? Anyway, I tried something a little different on Zameon's Power Sword. I was looking at Duncan's Simple Power Sword Glow Tutorial, but swapped Guilliman Blue for a thinned Bahama Blue and went OTT with the Nihilakh Oxide. I still wasn't convinced and with so much Verdigris on it anyway needed to do something to make it more 'powered' so brought in the pure white glow. It's still not quite what I was after but it'll do. Zameon just needs his plasma pistol finishing off. 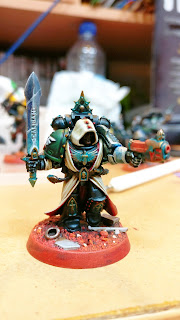 Edryc Setorax had a similar effect on his Power Claws, still need to add the white. Just some very minor tweaks and some bits on the pillar he's leaping off/landing on. Perhaps do something with his feathers again weird 'Ravens' that are supposed to be white, yellow and black...?! 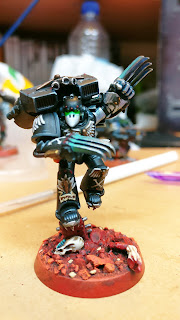 Vael Donatus, I'm less than impresse with his Pteruges [the kilt strip thing] but I didn;t do a good job on the last one I did [some Assault on Black Reach model?] either. All of these need some further tweaks on their bases and all their purity seals need a Soft Tone sepia wash since the little script has been added [poorly as usual]. 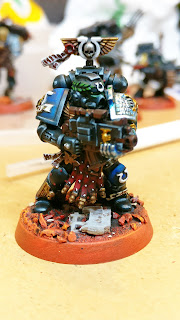 Rupert Grint is the final of the five 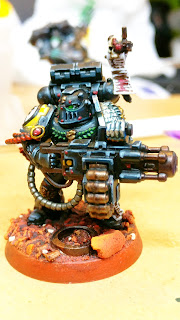 All of these are almost complete and once I've done those bits mentioned and their bases they'll join Mr Redblade in waiting for their varnishing. The rest of Squad Cassius has also had some additional tweaks alongside the Space Hulk Librarian. I'm hoping they'll all be complete [ready for varnish at least] by the end of the week, but we'll not mention Jetek Suberei...