I know there's been little evidence of progress, or anything else on the blog but I assure you things have been moving along behind the scenes with the Genestealers. It's just a little hard to show what's changed, until now at least. 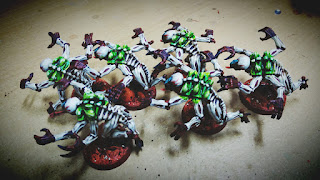 As you can see I got the opportunity to do some toxin sacs. These 6 stealers came out really well in the end. 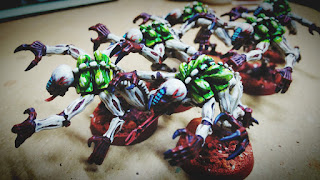 All the talons and claws needed doing, and unlike my traditional recipe with black, black highlight 1, and then various highlights with more turquoise and white I decided to go all GW and use Dark Reaper as my first highlight and then do the Bahama Blue and white with a white pin light, much how I did the Ravenwing 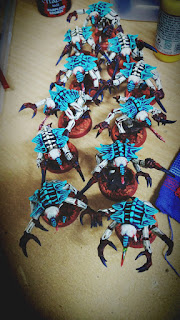 These are still at the Dark Reaper phase which I think is sufficient. I also did the Bonewhite chips on the bases too. Some elements were dragging on longer than anticipated but for the most part I've smashed my estimates which either makes me a bad planner or I've overcome my generous timescale because I'd thought the whole project was too laborious and ultimately depressing. It's required perseverance and determination to push through these last parts but it's been far from miserable. 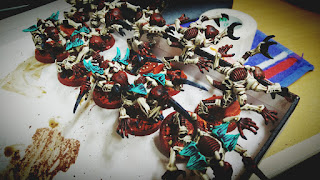 I also did the Mechrite Red bases [I still have some left]. As alwys the foundation paint is super opaque but is not quite as bright as the Valejo Heavy Red finish on the marine on the right. So the Mechrite gives me the coverage and then a subsequent coat of Heavy Red makes it look nicer. 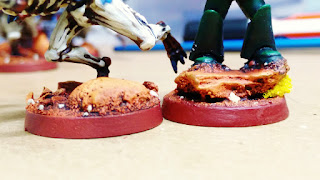 Here they all are having had their bases edged. All that needs to happen now is Army Painter Anti-Shine the lot of them, gloss varnish on the claws and half of them will have some form of yellow flock, the other will be left without, I just need to judge which bases will benefit from the addition and which will look to busy 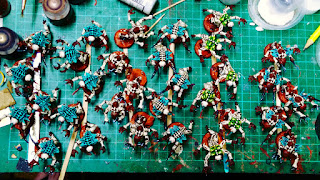 And while I was at it I cracked on with these Carnifex heads. I decided to do some blue for the Bio-plasma, I don't know why I;'e been doing it the same green as Toxin elements elsewhere but it just seemed worth trying and although it looks superclean among all the other nid goodness I think it was worth doing because it doesn't look too bad. Should I ever do anymore of these heads I'll do an orange one too, I could have gone one orange one blue but for the sake of expediency they both went blue. 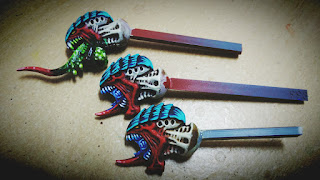 They just need magnets put in the necks then alongside the double tusk head I'll have four spare Carnifex heads, just need four more Carnifex to put them on! Ha, ha, not for long time. Anyway, next up the finished pics, just as soon as I can get a chance to take them...
Posted by 40kaddict at 12:08