I decided to do some freehand identification markings, this is 2nd company 5th wing, Alpha Squadron, craft PSI [cos who doesn't like a Pitchshifter reference] or somesuch vague meaning. The cool thing is that new flyer book suggests all markings on ravenwing flyers are meant to secret and hard to fathom by outsiders. 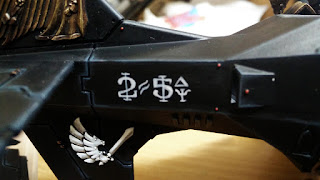 Once again i was struck by how much easier it is to pain numbers than roman numerals. To be honest the sides are different, this side is a bit taller and more tightly spaced, which isn't quite as nice as the other side. I could have probably done a little more to construct a grid to ensure they were better matched. But, you can't actually see both sides at once so you wouldn't really notice, maybe if I do another one? 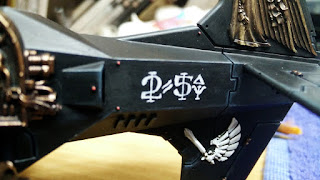 Having started to apply some of the orange OSL on the jets I suddenly realised how the open jet engines wouldn't work - gaping black holes that are all lit up round the edges. So I resolved to fix it, albeit a little late. I stuffed the engines full of rolled up kitchen paper. I must have forced about two paper towels in each engine, it's amzing how much space is inside these! I;d originally though to use tin foil as it compresses harder but there really was too much volume to fill, and it'd have been harder to do. So instead paper and to cap it of I plugged it with DAS air drying clay. A small blob and then a damp end of a paint brush rounded it off. 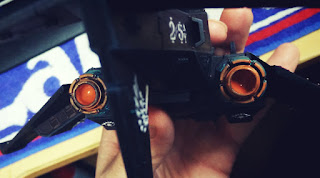 The next night it was simple enough to paint over, no primer necessary, orange highlights up to yellow with some bright white blobs and I'm pretty happy. 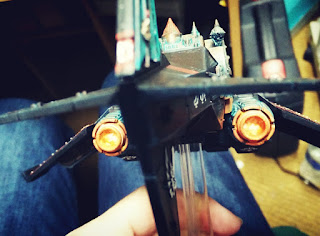 The jet vents were alittle more understated than I'd planned but I was finding all the orange OSL just looked wrong, so I was able to remove it with just a hint of glow which I think works better. Also of note is the three 'bear claw' tribal stripe motif on the tail. This is only on the right side, if I get another flyer it'll be marked on the left and a third [for a Silence Squadron] will be the leader with both left and right markings. I later took time to add the same markings on the Jetfighter tail but asymmetrically on the left side. This will again be mirrored on a second flyer also with both sides marked on the third. Also worthy of mention are the red windows on the Dark Talon stasis cell. These will be picked out with Tamiya Clear Red X-27 when done. I even decided the conical 'dome' was tempered stasis glass too. The picture makes it all blend together quite well [much better than reality]. 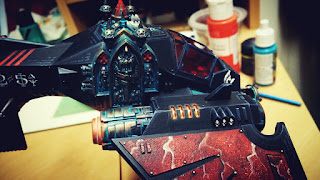 I've spotted a couple of things in this picture I can do to help blend it into the fuselage a bit better, despite already varnishing it. The Anti Shine has not gone on well. As expected I'm seeing brush strokes and tide marks in the Anti-shine. It catches the light funny and makes a mockery of the effort spent trying to make the black as flat as it could be.

I can only think a second coat might even things up or alternatively sprayed on, which might mean cranking out the air brush. I'll try a second coat underneath first to see if it helps. Regardless I;ve still to paint the glow on the rift Cannon and finish of the Blackthorn missiles then it's done!
Posted by 40kaddict at 12:09