Ben and I haven't had a battle since mid April, so it was about time we did and about time the Hive Fleet Gorgon took on the Necrons once again. We even upped the ante and went 1850pts.


The low down:
Ben did give me a sporting chance by not taking the Decurion but other than that there was a lot to be wary of: 6 Wraiths, Triarch Stalker, two units of Immortals, Ghost Ark, Tomb Blades, Annihilation Barge as well as Doom Scythe delivering Lychguard and Warriors into the fray. 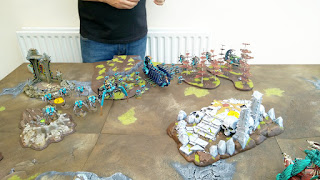 I'd used a lot of my Throne of Skulls force, but got three Dakkafex and two Flyrants in as well two Tervigons. The key being I went for two CADs and the Genestealer allies. 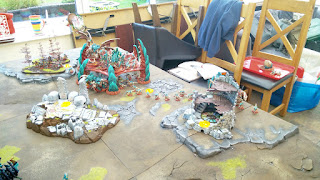 Ben Went first and advanced everything, he managed to kill a Termagant in my big brood and the Tomb Blades took my Genestealer hybrids down to 4 and the Magus [on 1 wound] thanks to ignores cover upgrades! He was unable to score any VPs though. 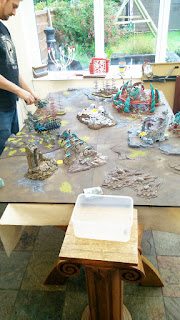 I was extremely lucky with my cards, I pulled hold objectives 1, 5 and 6, which were all closest [or inside] my DZ. Number 6 was in the ruined tower on my left, I spawned out on 9 Termagants to secure it, the big blob got number 1 and the remaining Cultists held number 6 on the right in the wood. Meanwhile the Carnifex and Hive Tyrant took the centre. One Flyrant managed to cast Warp Blast but failed to hit the Stalker, which might have brought his Quantum Shielding down so the Brainleech could glance it.

So instead everything fired at the Wraiths, all the Dakkafex and the Flyrants - 70 shots [plus a few Termagants might have caused a wound] and it was just enough to beat the odds. He failed only enough saving throws and Reanimation Protocols to kill the squad. It was a devastating blow but took all my resources. I ended the turn with 3VPs plus First Blood. 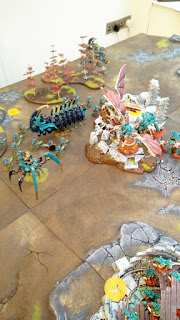 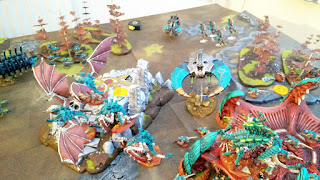 and Flayed ones appearing below. Unfortunately the second unit of Flayed ones mishapped and I deployed them out of harms way in the far corners [although not far from objective 4 so still of use should Ben get the card]. 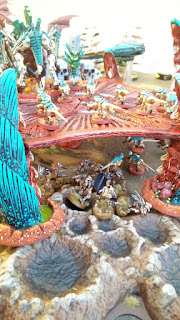 Ben initially brought the Doom Scythe on here, but due to the hull mounted weaponry having little to shoot at moved to the other side of the Chaos Shrine and deplyed the Lychguard onto objective 2. 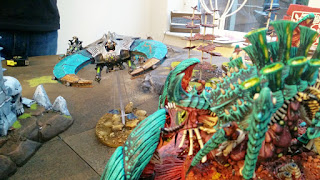 In his turn 2 Ben managed to complete two missions - capture objective 2 with the Lychguard and Assassinate - killing my second Flyrant [the one with Warp Blast!] with the combined shooting of his Ghost Ark and Immortals. I think the Carnifex I'd given spine banks to was also killed, Ben had managed to recoup the value of his lost Wraiths. 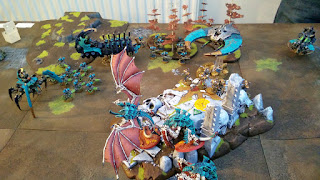 The cards were kind again for me, objective 6 was secured by the remaining Cultists for a second turn and I was able to manifest 3 psychic powers: Tervigon cast Warp Blast, hit the Tomb Blades but they Jinked and survived. Warlord Flyrant cast Psychic Scream but the nearby Immortals survived no problem and something was Onslaughted. Manifesting the powers, even with little effect on the game netted me 2 out of D3 victory points. 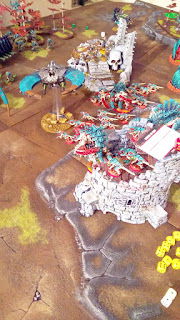 Turn 3 and Ben managed to overrun my Cultists with the Tomb Blades. 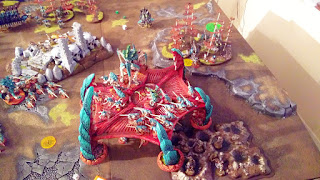 The Doom Scythe targeted my Dakkafex with little joy, but it [or the Ghost Ark] did deposit a bunch of Warriors in the middle of the board just to ruin my day. 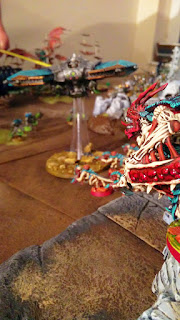 The middle of the board was looking pretty solid and to cap it all those misplaced Flayed Ones did come into their own and secure objective 4 in the top left to score Ben a VP. 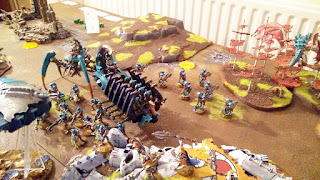 Underneath the Skyshield the Flayed ones charged the Termagants. I could only get 16 in pay and managed to bring their number down to 5, but with 25 attacks on the charge they slaughtered the 16 they could reach, leaving them locked with the remaining 13. The Lychguard charged the Dakkafex in the middle, I avoided their Mindshackle Scarabs [I hate them with a passion] and it stomped on one or two but they cut him down with ease.

My turn 3 and I drew objective 4 and 2, [both in Ben's DZ and one held by the Flayed Ones the other by Immortals] and a VP to have three units in my own DZ and none of Ben's. Due to the positioning of the Flyrant I had to turn right instead of left, towards the objectives and give support to the newly arrived Tyrannocyte and Rippers. The Pod had landed almost exactly between obj 2 and 4, the Rippers could claim one as they were ObSec but only with a run which they made. 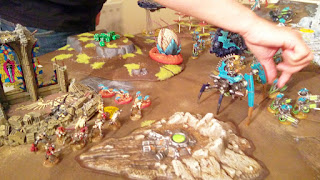 The Flyrant took out the Annihilation Barge regardless, while the Tervigon assaulted the remaining Tomb Blades. Underneath the Skyshield the Genestealers broke the deadlock with the Flayed Ones securing me the VP but that is an issue I'll get to at the end...

The Termagants having made a disastrous charge on the Immortals turned tail and were chased by the Immortals, the other spawned gaunts tried to tar pit the Lychguard 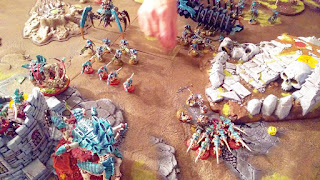 Everything else poured fire into the exposed Dakkafex, except for the other broadside of the Ghost Ark which aimed at the Tyrranocyte. The Dakkafex went down to just one wound and then took another 5 that I had to save

Yeah, not on this watch! 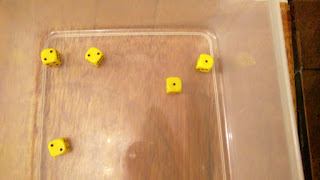 The Flayed ones wiped out the Rippers to secure objective 4 and a VP. 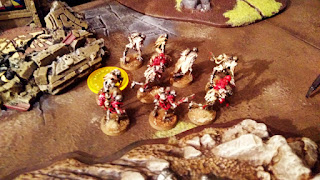 The Gaunts managed to pull down a few more Lychguard, and I was able to secure objective 5 in the ruined tower for another VP. Meanwhile on my right flank the Flyrant had managed to reach the Tomb Blades locked in combat with the Tervigon. The Flyrant managed to cast Psychic Scream, with Ben looking out on a 12 on the Leadership wiping them out and freeing up the Tervigon. 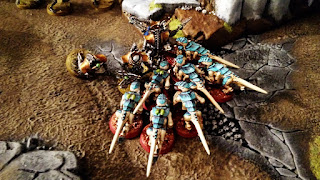 But they were ultimately slaughtered, leaving the Necron Overlord to hunt larger prey next... 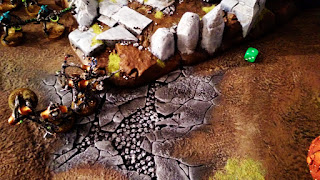 The Flayed ones from objective 4 continued to be useful [considering Ben wasn't going to put them on after the mishap] by wiping out the Tyrranocyte, 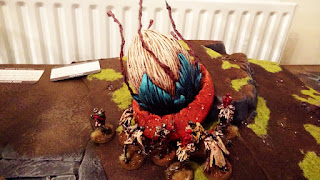 it did kill at least one of them in combat though which is always nice to see :) 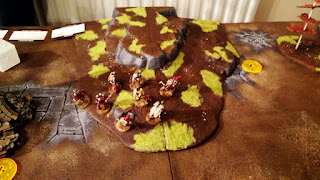 The Overlord charged the Tervigon, which was down to 2 wounds so it was not going to survive but as both were Initiative 2 I could achieve mutual destruction with a Smash! attack. One roll of the dice and I hit, and I got a 2 to wound. He failed any save [if he had one] and his Reanimation Protocol but he took out the Tervigon as he went. 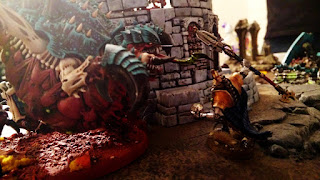 This wiped out a number of Termagants in the ruins. 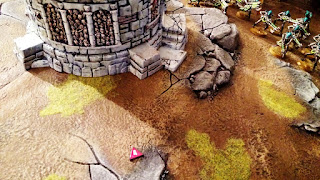 Ben's turn 5 and despite our early start we're pushing 12:30am and Ben manages to secure objective 1 with the remaining Lychguard and 3 to score 2VPs and I think he gets Linebreaker. Given the hour we decide to call it. 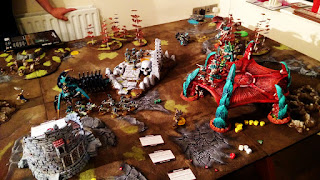 For the first time ever Hive Fleet Gorgon has won against the Necrons, with 9 VPs, plus 2 for First Blood and Slay the Warlord I'm on 11 and Ben scores 8 but in writing the report I realise I've cocked up. I'd been thinking how I'd achevved it with some expensive units effectively just holding objectives - the Cultists and Genestealers which I could have done with a 40pt unit of Termagants The Cultists scored 2, for  a cost of 150pts and all the Stealers did was broke the deadlock with the Flayed ones to score 1 VP and they cost 130pts, except when I went to look how much they were I realised when I'd switched from my ToS starting list of 1 CAD plus allies to 2 CADs plus allies I;d had to drop the Stealers to fit the second Tervigon  and small unit of Gaunts in. So in effect I played with the Stealers when I shouldn't have :(

This would make the score more 10-8, I'm pretty sure the Termagants, even with the Venomthrope couldn't have bested the five flayed ones, 13 attacks, plus the 3 poisoned [2+] Venomthrope shots and it's Toxic Miasma. I'd have been lucky to take out three of the five which would have left them in my DZ/table edge. They'd have then been killed by the 20 attacks in return but what would they have done after, and how it would impact the remaining game I can't tell. To say I'm p'ed off is an understatement. My first success ever and I went and screwed it up with a mistake.
Posted by 40kaddict at 12:01