With the Genestealers in progress there's not much to see at the moment, however I wasgoing to share a link to my mate Liam's ebay auction for a 2nd edition Epic Space Marine. Unfortunately the auction has already ended and sadly this whole lot went for just £6!!! A tragedy really, he did mention perhaps some of the stuff might have been mine, which I thought likely as most of my gaming stuff from that era was either in his house or Chris's.

Having looked closer at it I know I've got a metal Rhino that is orange, the Legion of the Damned Rhino is also something I think I did and some of the Guardsmen look similar to some I had. He said I could have it but I hoped it would bring him some funds for more toys as who doesn't want to see what Liam does next? He's spent a lot of time completing his Degree and is preparing for an MA but he still likes to paint toy soldiers. So I'm a little sad it didn't go for more, someone got an absolute bargain. 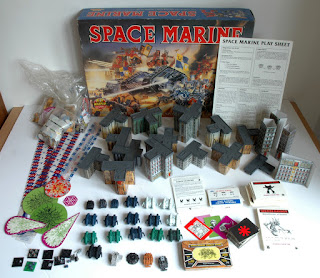 That said I did my own purchase and finally picked up a copy of Space Hulk. Taking itno account funds are a bit tight I foolishly snapped this up but for £45. Now it doesn't have the Terminators, whcih is a shame as I'd like to have converted them to Dark Angels but everything else is there and these are going for £100+ usually so I can't really complain and I;ve got terminators painted anyway. 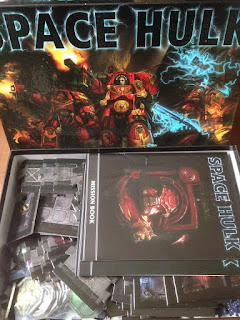 I'm not sure how I'm going to explain it to the wife, but all sorts of parcels are turning up as it's her birthday soon, so maybe she won't ask too many questions... Fact is I've actually worked out my costs for this year and it comes to around £274 [including the £130 for our jaunt to Throne of Skulls] so I don't think £144 of 'real' spend is too much. That's £24 a month, whic is what I was spending on my kendo fees roughly. Anyway, I'll have a proper break down of my pends later in the year, until then keep it tight.
Posted by 40kaddict at 13:03