So with red red wing done I went on to do the second wing but was undecided as to where this is going to go. Firstly I thought the red was too much, hence why I didn't paint the leading wing edge, but will that be black, or bronze? It certainly won't be white, but the red isn't great and in some respects the flyer looked overall too bright... 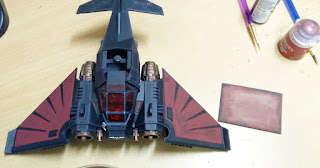 ... at which point I inexplicably look up 'red marble' in google images. Can I just say ever since I saw the first painted example of a Jet Fighter with marble panels on the wing I thought they were downright stupid. Sure the 40k universe is backwards, inexplicable and filled with anachronisms but no one would be stupid enough to put stonework on a flyer! Then I saw this and thought what the hell, why not?! 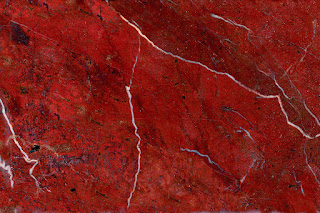 So I looked at a couple of YouTube tutorials, Duncan at WarhammerTV was particularly useful regards the striations that are within the stone [but I was always going to stick to water instead of Lahmian Medium]. I also checked out the painting Buddha guys, but it was above my pay grade really. However Jay Adan had a tutorial with sponging that better matched the example above and so I used the piece of card I prepared to do this test piece which I was well pleased with. 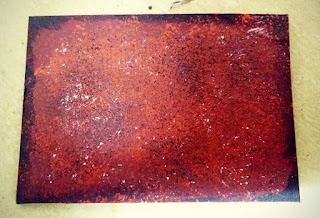 So on to the model, where I immediately deviated from my test and did not thin my ever trusty Vermilion and so sponged on some pretty great [but not what I'd intended] texture, almost like the sandstone back on my Oneplus One 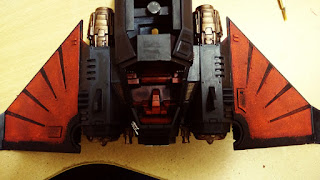 You should be able to see the grainy relief in these shots.

The next night I sponged on some Vallejo Heavy Red and black in varying degrees. This darker texture was to try to bring the tone down and reflect those darker grains in my inspiration image.

Luckily that took the tone down because if I was concerned about Khorne Red being too bright Vermilion was definitely out of scope, albeit fluffy and ties in with all the other Red Planet BASE! elements 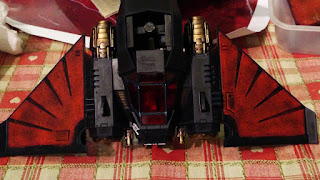 I followed up that gorgeous dark with adding more light! Yep some Bonewhite micro-fragments courtesy of my sponge [I wonder what else I can do with it, obviously weathering but I love the minute detail here].

And here come the striations. Lesson learned - it's really important to go in thinned, then you can build up where it's lightest. But if you put too much paint down you can use water to then spread the paint and streak it out so you get those thinning tendrils. 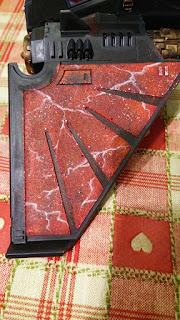 Although I was really pleased with the results I thought it needed something else and as per the google image certain areas above or below the striations had a darker red. 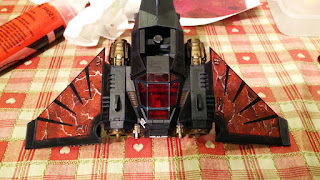 This added extra depth and dimension to the marble. So, some thinned black did a good job of replicating that. I must admit the wing on the right below I think is more successful. The other wing seems to have too many striations, it looks a bit forced and unnatural. I may try and fade one out a bit.

Here's a close up of the finished effect 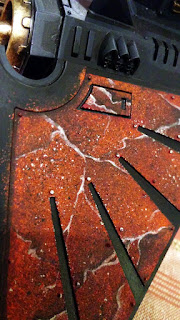 I'll admit that I am thoroughly happy with what I've achieved and how close it is to my source and yet retains my own aesthetic. But I'll also say that I'm not sure about it, it'll obviously stay because it came out so well and really stands out but that's the point. For my dark and brooding jetfigther - bright red and white wings is that really what I should have done? Its all a bit gaudy. Part of me wonders if I get another, and I would ultimately like three, do I try a bronze version or even a black marble version? And then I conform and realise I've done this and this is how they will all be patterned, like it or lump it! We build our own prison cells and some are clad in Vermillion marble...
Posted by 40kaddict at 12:16