What do you do when You've got a load of 'big-ticket' projects on the go, that's right resurrect a small-ticket project that's been mothballed since August 2014 as a distraction. To be fair though these are on my To Do List, however the plan was just to tackle the part painted one and leave the other but then the List states paint them both... so I undercoated it as a test of one of those £1 matt black sprays from Pound World/Empire/Land. 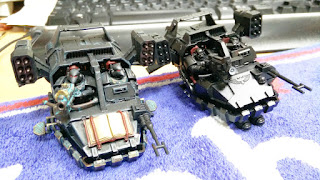 The result was pretty damn good, although the finish is a little 'tacky' feeling but coverage was great. You'll also notice the 'progressed' speeder has had a 'book of vengeance' added to the front. The underneath had been a bit dodgy after I removed an honour badge so I decided to cover it up. I've also added some more Warplock Bronze in places where more metallics need to be added, as I had to metalise the new one. However, as much as my metals go a long way to creating the unique look of my Dark Angels I do find the process quite demoralising. The textures and effect created is always rewarding but its another one of those tasks that I have zero desire to do and tends to kill my momentum dead! But that's a separate issue, moving on...

Bottom line, with my new found confidence in my Ravenwing I wanted to try and get a quick win with at least one of these Speeders, either way I can move them on a little bit, hopefully build up my skills even more, so tackling the Dark Talon's black elements will be easier because currently I'm a little daunted by the scale of the task ahead. This may just be all I do, although I hope to at least bring them both up to the same level, even if they're not completed.
Posted by 40kaddict at 12:13