Game 2 and I'm on the same table, for a minute I get confused and think I;ve been paired with Dan Johnson's Nurgle Daemons [was this some cruel trick of the Chaos G.O.D.s trying to tell me something?] and then it transpires I'm partnered with Rob Hill and his insanely awesome Mechanicum which was great considering the support he's shown to this blog and how much of a fan I am of his own - mutual back slapping and modest compliments ensued! But we were also facing Chris Buckle and his Imperial Fists.


The low down:
Again not sure how to report this as not only did I not take too much notice of what missions were drawn but Dan kept track of the scoring on a dry wip board, which looked handy. 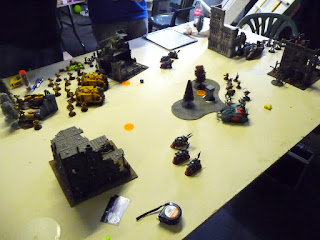 Having won deployment I selfishly shifted everyone round so I could take full benefit of the ruin in the right corner for my Devastators and bolster it thanks to the Techmarine, who subsequently hung around the back of Venator becuase I figured it'd draw a lot fire and he could try and fix it. 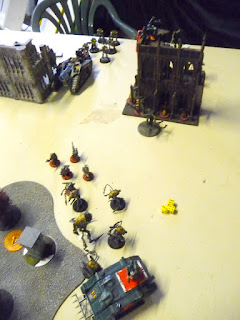 Chris had a pretty static gunline with Thudd Guns and Vindicators! 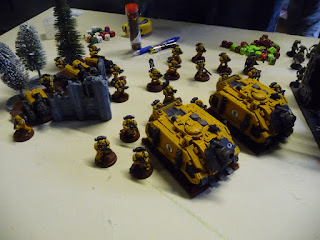 Having stolen the initiative I think we had to secure objective 6, or get double objectives than our opponents and onjective 6 was the key. To do that my bikes scouted forward and that Vindicator had to go! 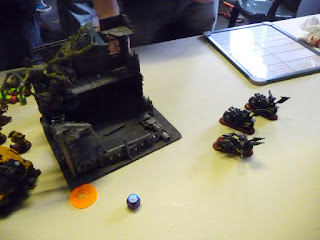 The Venator did the business, alongside an orbital bombardment by the crazy looking guy leading the automatons. The Vindicator exploded and with a 5" blast took out one of my bikers who'd closed on the objective [actually it might have been the plasma gun biker that made the killing blow] Either way I think we had a good turn, although my Rhino did immobilise itself in the trees, at which point I was wishing the Techmarine was't so far away [and that I didn't forget every turn to try to fix the 'immobilised' with the Rhino's special rules!] 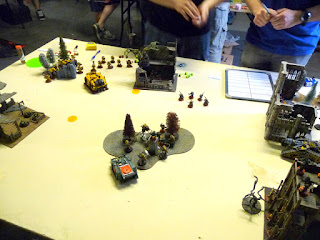 In response the Thudd Guns tried to do some serious damage on the Devastators, they weathered the fire, taking only one casualty but they were pinned in the process. The Daemon Prince jumped down to assault my Assault Marines who stood fast, which was either brave or foolhardy. Interestingly Dan  suffered a Dangerous Terrain test wound for the Prince which confused me as for a few years now I've been of the understanding that they don't take them. Monstrous Creatures have the 'move through cover' special rule that means they automatically pass Dangerous Terrain test, so even though he would jump into difficult terrain he would automatically pass the test. I tried to raise this in our game but everyone was of the opinion he was playing it right which makes me question my interpretation. I've been playing it this way for years now, ever since I saw PeteB's Wraithknight was jumping in and out of cover, without dispute. When you consider multiple Flyrants dropping into cover you'd imagine folk wanting those Dangerous Terrain tests to be made if wounds could be taken. So have I got it wrong? Because I can only see the Move through Cover Rule over-riding the Dangerous Terrain Test, not the other way around and Jump rules trumping the MC rules. 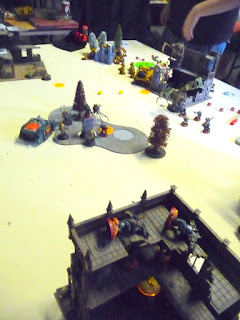 Turn 2, my other unit of bikers go for the Nurglings, although I can't kill them I remove enough to get them out of range of the objective so I can score it! 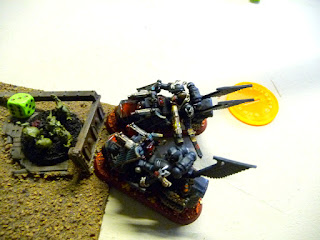 The last Vindicator gets wrecked, sweet revenge for my bikers which were destroyed by the Great Unclean One. 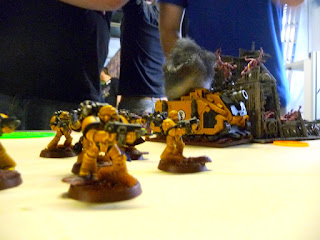 The Thudd Guns continued to plug away with mixed fortune. 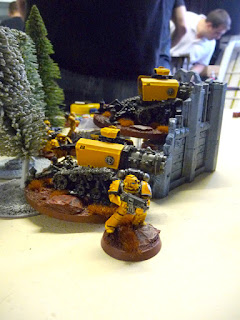 The Daemon Prince entered it;s third round of combat with the Assault Marines and the Great Unclean One advanced from the ruins. 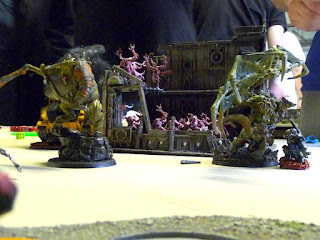 He wanted to kill Rob's Warlord, but it's invulnerable saves held. 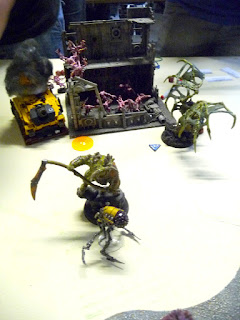 Chris managed ot dislodge my bikers from the objective with his Fists, clearly the Inquisition need to have a word helping out the almost but still alive Nurglings! 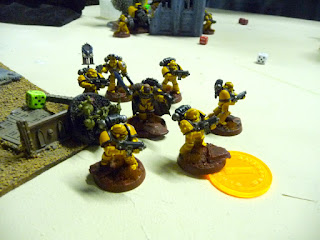 In some deft positioning the Vneator had moved to hold the objective in those ruins while I was holding the objective in the woods. Both of these missions required our partner to be controlling and objective and this doubled our score for that turn from just two for each to four for both. The Techmarine had dawdled repeatedly to keep up with the Venator, too enamored by it's majesty no doubt, but eventually he was right behind it when it was hit with so much firepower he didn't even have achanc eto effect any repairs! 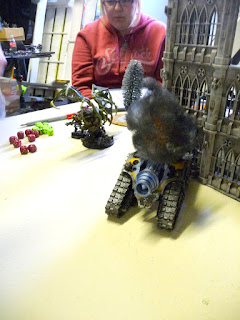 So the smoke settled and we were pretty despondent only for Dan to reveal we'd manage to snatch the win, thanks to a poor final turn by our opponents. The final tally was 15:12 however we lost on Blood Points 563 to 1305. Now I'm sur eI missed a lot out but Rob will be writing a Battle Report too so check out his blog for a different perspective.

It was an awesome game though and although the Dark Angels suffered a lot I feel we clearly sacrificed all we need to, to guarantee we completed the mission. We did not sell our lives cheap and I think we worked as a good team in the end. The Daemons were nigh unstoppable, with Iron Arm and FnP making it pointless for the Daemon Prince ot actually swoop, he was more effective on the ground, even if it took him 3 rounds of combat to kill five assault marines! That's Rogue Trader era models for you...
Posted by 40kaddict at 12:17