First up I was partnered with Matthew Grimes, he'd brought Tzeentch Daemons. Now I'm not saying my Dark Angels had been visited by some Tzeentchian door-to-door missionaries but they may just have 'fallen' a little bit for this game. We were up against Steve Horne's Ravenguard and Kai-Uwe Müller-Joswig [Hendrik's brother] who'd flown over from Germany just for this tournament! Kai-Uwe had the Space Marines, I think they were Dusk Wolves but using Space Wolf rule. For all games the two partners would be Battle Brothers and the missions were based on this rule pack


The low down:
Not sure how to report this as I didn't take too much notice of what missions were drawn and what was scored. For our set up Matthew held the right flank, with my Devastators in the Techmarine reinforced ruins. 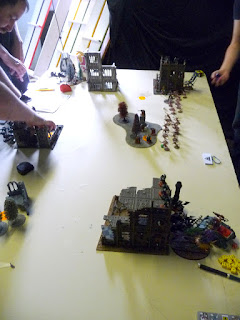 The Pink Horrors filled the middle with my Scouts hiding in the forest, to hold that objective, should we draw the card. 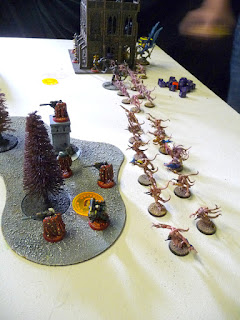 Long Fangs and Scouts were opposite, almost a carbon copy of my own force. 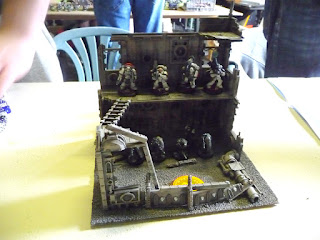 A Lone Wolf was on the left flank, opposite the bulk of my force but close to that objective. 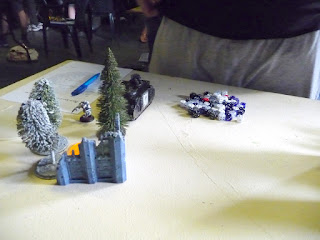 Some more Marines held this back field objective. By the end of their turn Steve and Kai-Uwe had scored 2 VPs. Their main focus had been my Tactical Squad with the Missile Launcher on the left flank and wiped them out. 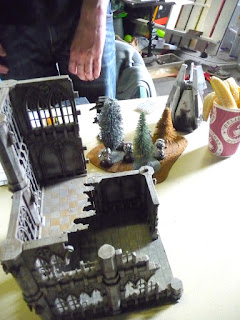 In response we advance. Matthew was full of energy and totally knew how his army worked so I was a bit of a passenger at this point, which was cool with me as it meant the burden of keeping track of all the rules was lifted and I could just spend time having fun [the thing I'd felt hadn't been happening in previous tournaments]. 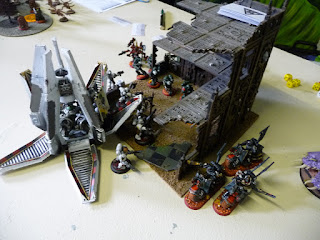 The Tzeentchian magic phase was brutal. 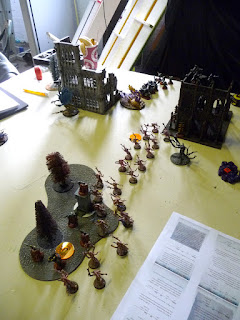 A new chariot was spawned and wreaked havoc on our opponents, the Scouts and most of the Long Fangs were all but wiped out. The Storm of Chaos also blew but failed to hurt anyone. 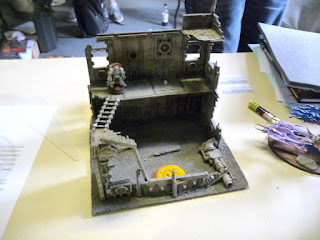 I was able to contribute with shooting some of the Wolves off their objective. 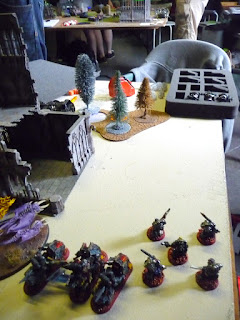 With Terminators on my doorstep I was trying to whittle them down with whatever firepower I had, hoping to assault with my bikes to a smaller force. 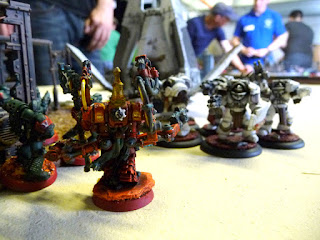 Unfortunately I couldn't find a chink in their armour. 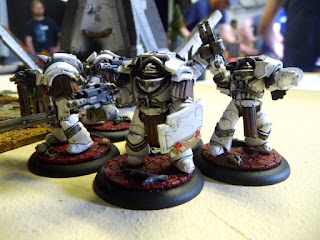 And lost a Ravenwing biker [either to plasma overheat or Dangerous Terrain, both equally embarrassing]. I'm sure one Terminator did eventually fall but have no record of it. We also scored 2 VPs to draw level. 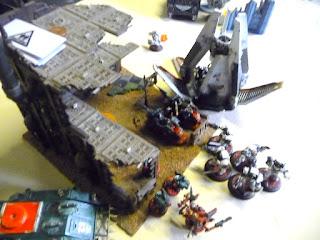 Turn two and the Marines had tried to attack our right flank with their Land Speeder storm. They scored 4 VPs that turn, I think with the Scouts scoring and also destroying my bikes on the left flank. In return we destroyed the Land Speeder and assaulted the scouts. 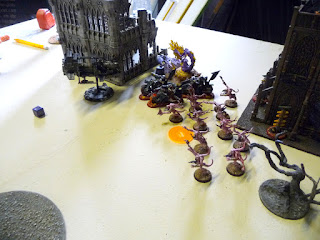 When the dust had settled we'd won back 5 VPs, I think we got 3 for holding the same objective for 2 turns. We were a point a head. 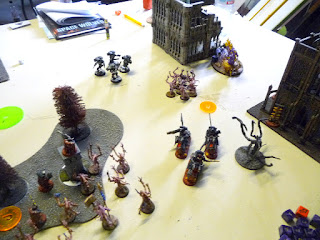 Turn 3 and I've no more pictures, all I know is we both scored 3 VPs each. With the final score being 10:9 we scored 1073 Blood Points and I only suffered 223 Blood Points, with just the Ravenwing, Tactical Squad and 1 wound on the Techmarine for half his points. Not sure how bad Matthew was hit but I can attest his army was insane. He had all sorts of spells and every time a chariots was destroyed he could spawn it back again in the psychic phase. They're fragile but pack a punch and I think 3 went down and 3 came back. He eventually won the tournament, saying he would use his winnings to buy a fourth chariot! G.O.D. help us all! A great start to the day and although I was the least effective part of the force Matthew and I worked well together and had a great laugh with our opponents.