Terrain is everything - Project Ω - Realm of Battle Board - We can rebuild it!

What we have here is the first 'real' step to the restoration of Ferron Proxima. The shadow wash solved the Polyvine problem but here we see the true colours shining through. The bottom board has had it's coat of Vermillion craft acrylic. I was slightly more judicious with its application this time as the shadow wash was heavier to counter the Polyvine so I was having to cover black shadows instead of darkened Red Oxide, if you follow. 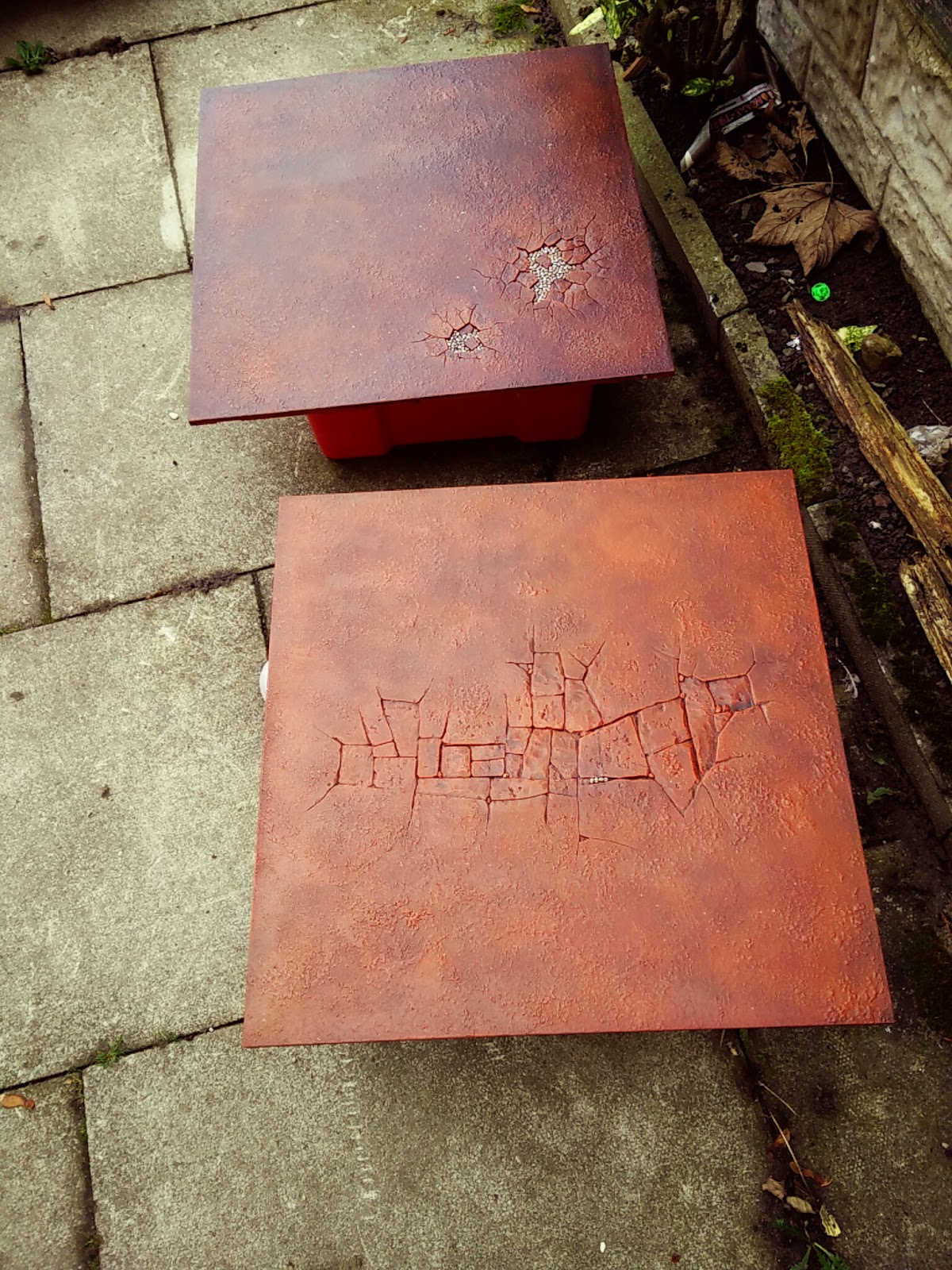 Now it took a suspiciously long time to do the first panel which may indicate I added too much and subsequently was less enthusiastic with it's application on the remaining tiles. 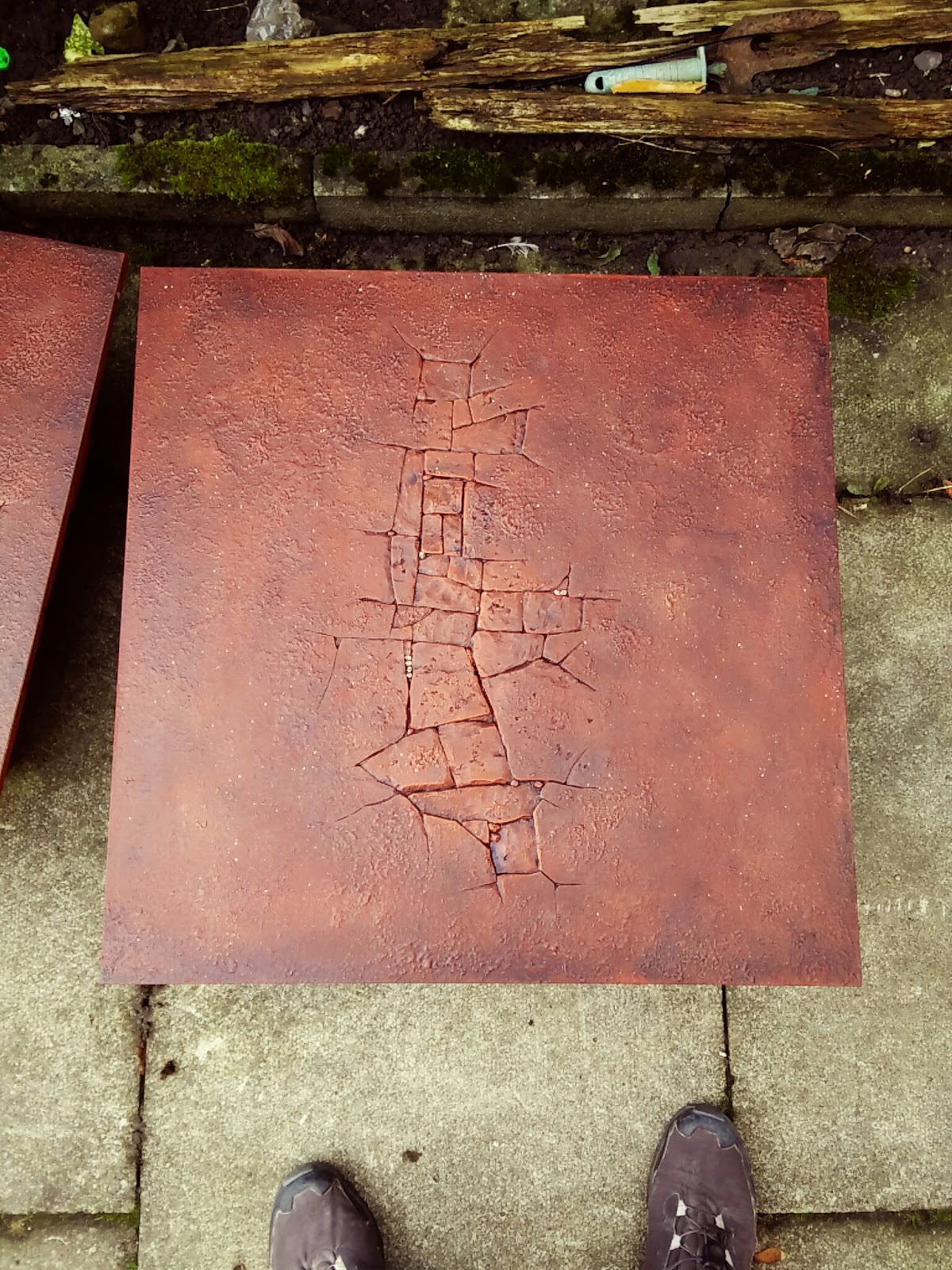 I don't know whether the strength of the application will show up, certainly in these pictures it's not immediately evident but there are filters applied to the images which may not represent 100% colour accuracy [close though]. 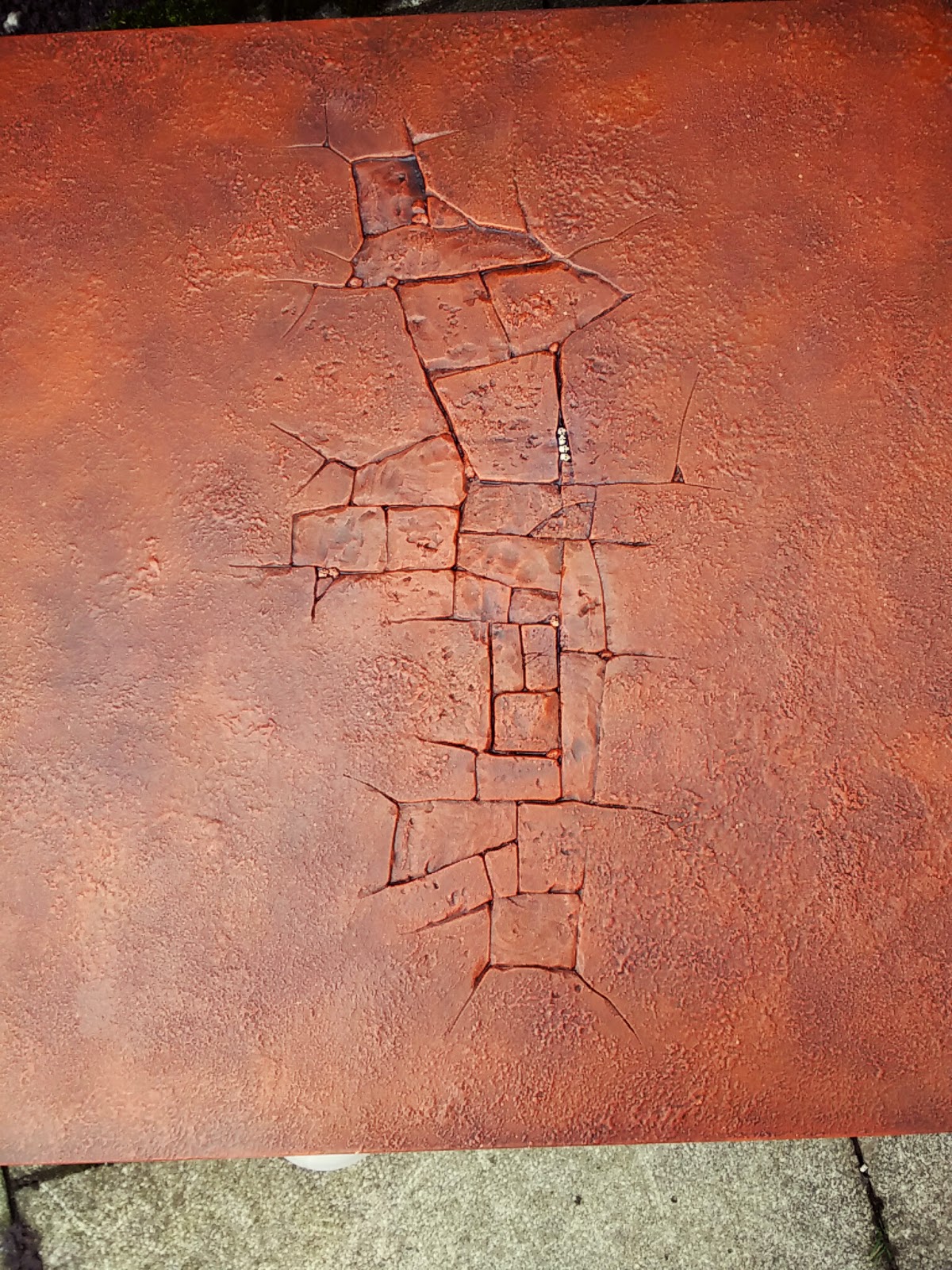 The second flat board seems to be of a similar tone and we are still saving some of the past effort. 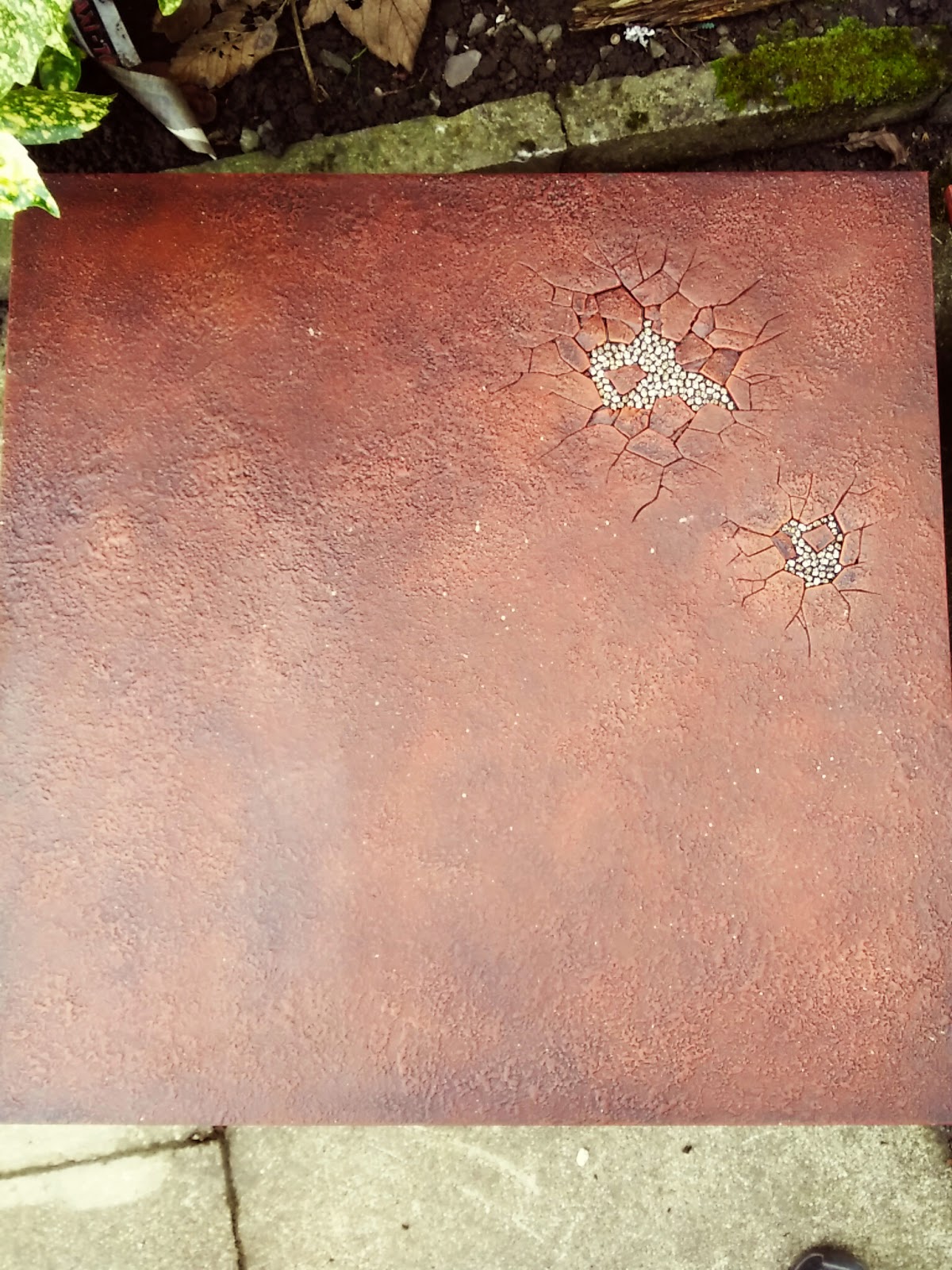 Although it may look a fraction darker in this comparison...? However I think I fixed the boards in respect to taking the highlight to the edge a little more. I was concerned the tiles would look distinct, I think I've mitigated that compared to the first time around. 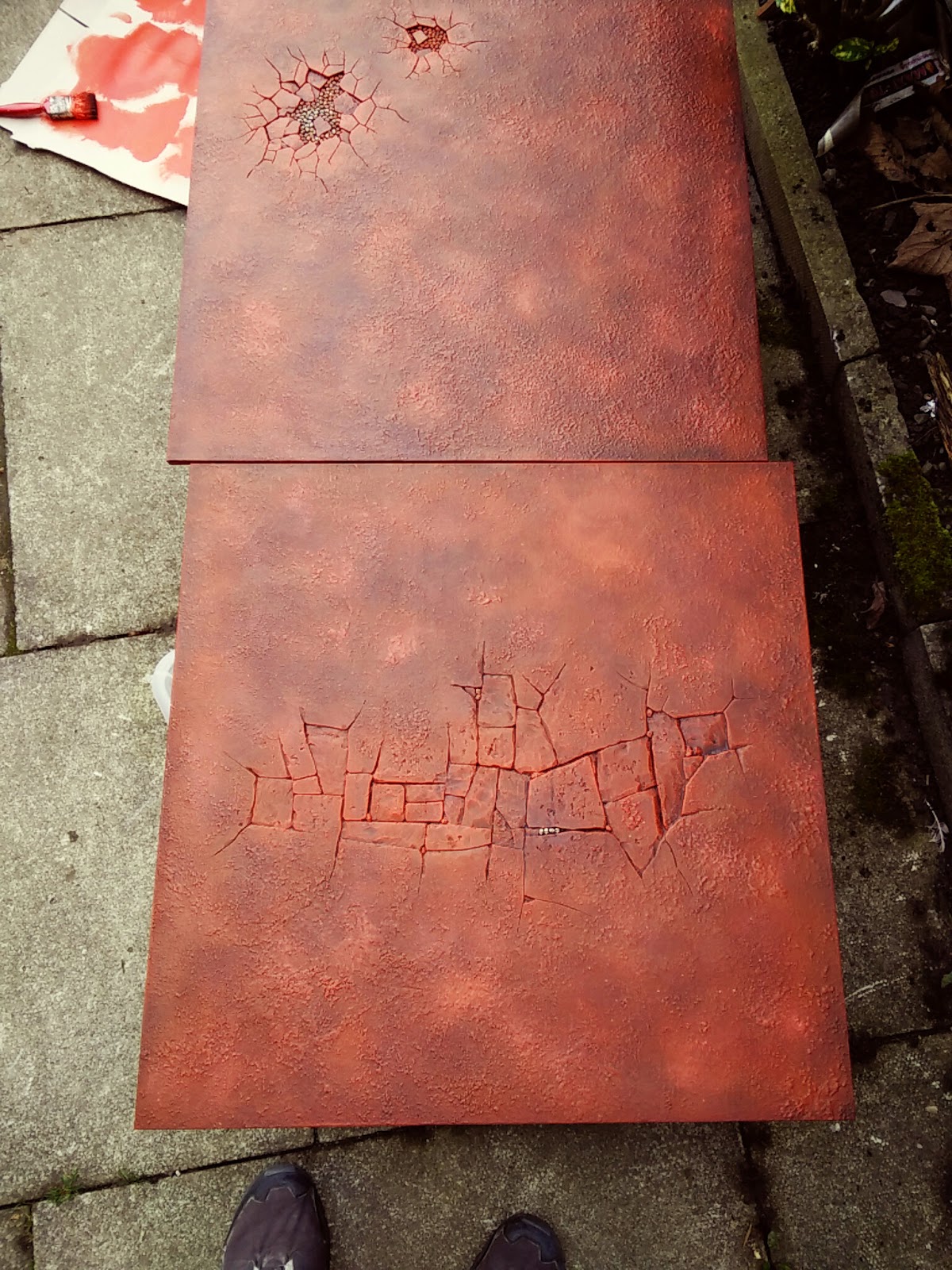 here you can see the right side of the board highlighted. Some may think I'm flattening out a perfectly acceptable finish but you can just see some Polyvine remnants in the top left corner so close up this far from the perfect finish so I have to fix it. There are still highlights to add to this which will bring back the contrast we gushed about first time around. 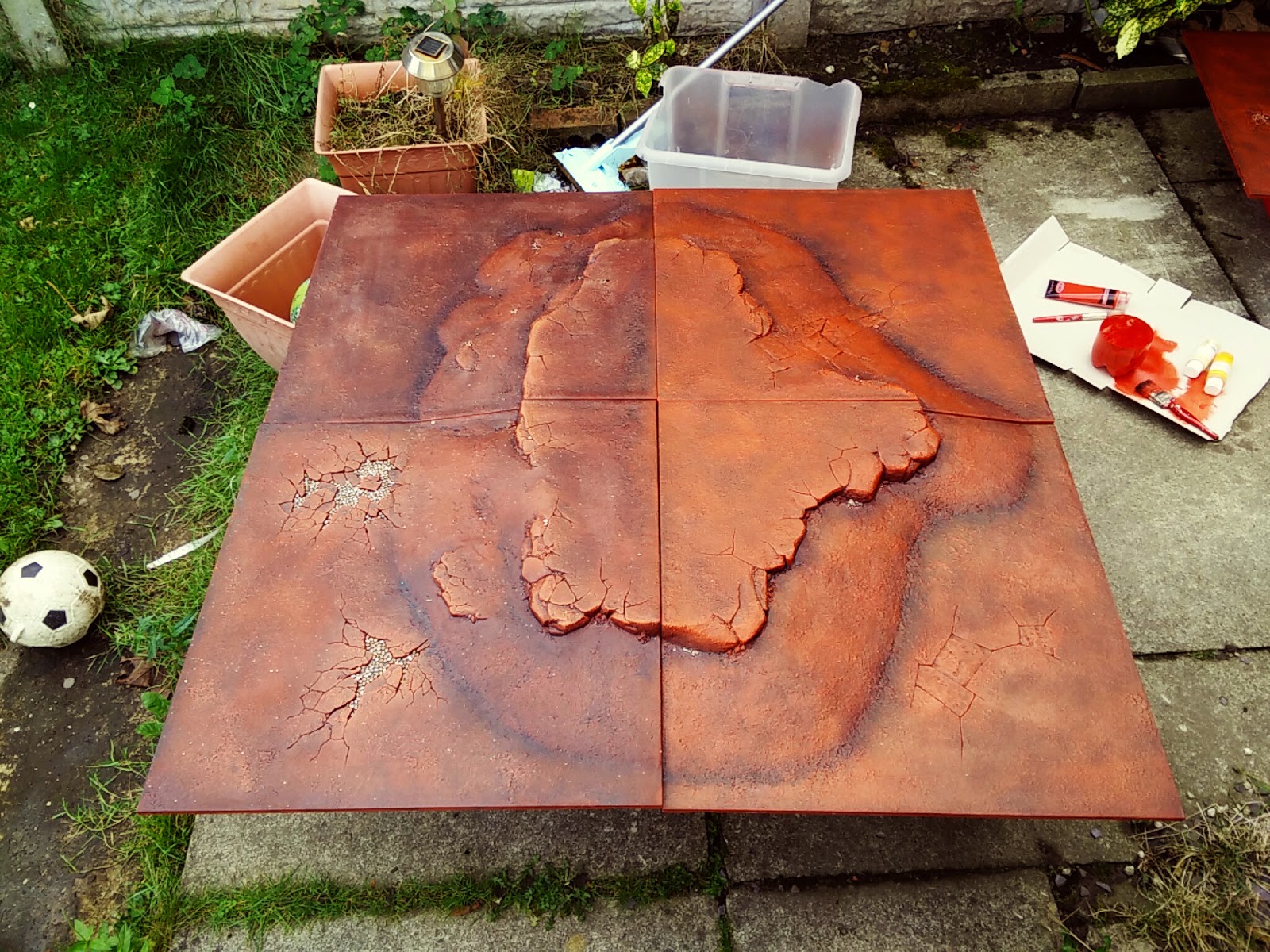 Bang! and the Polyvine is gone! All back to an acceptable first pass of highlights. 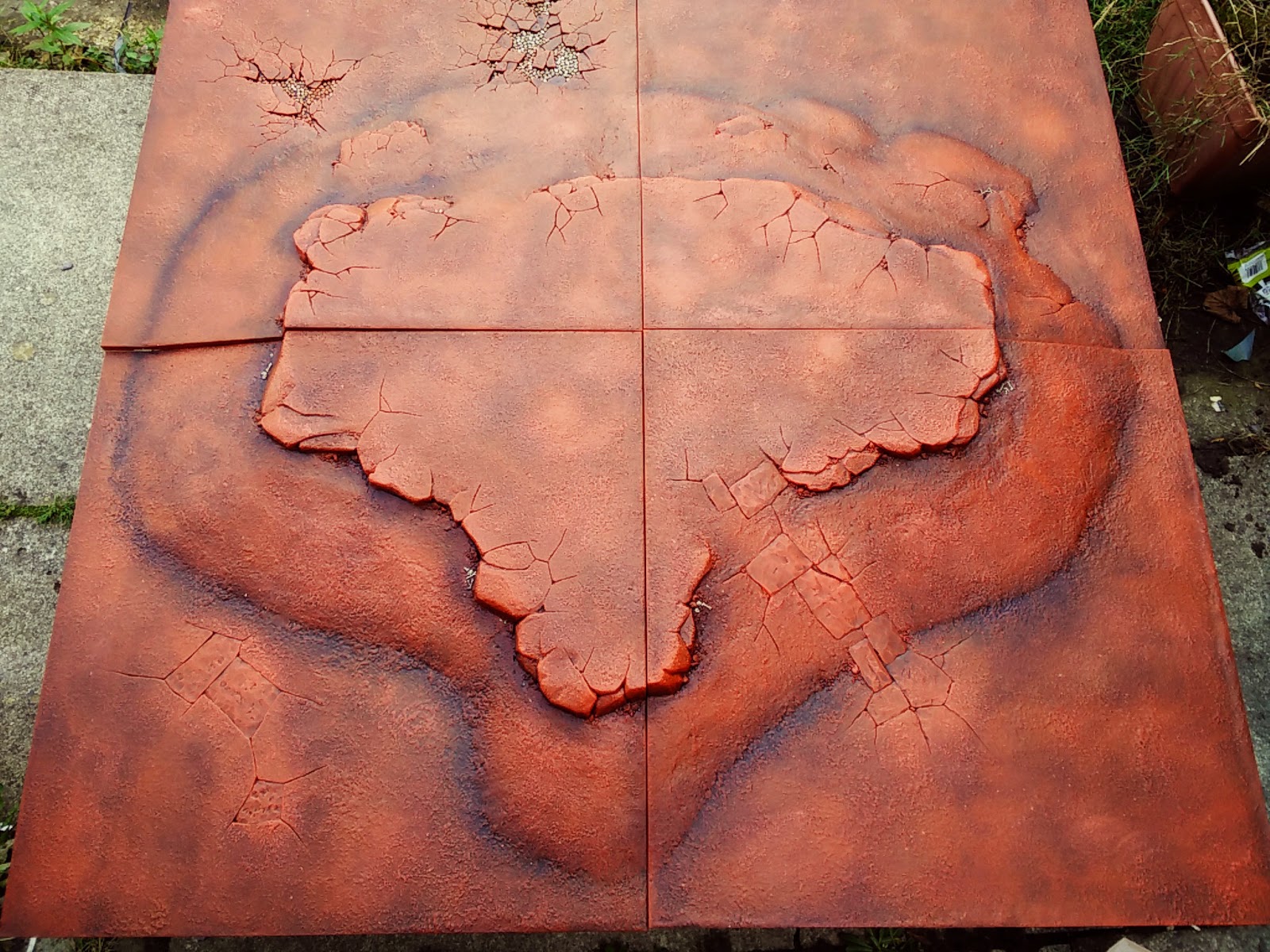 On with the Pumpkin, mixed in with Vermillion. Once again it was only a small amount of Pumpkin and I made sure not to highlight any tile edges, only board texture, and random spots across the board for variety. 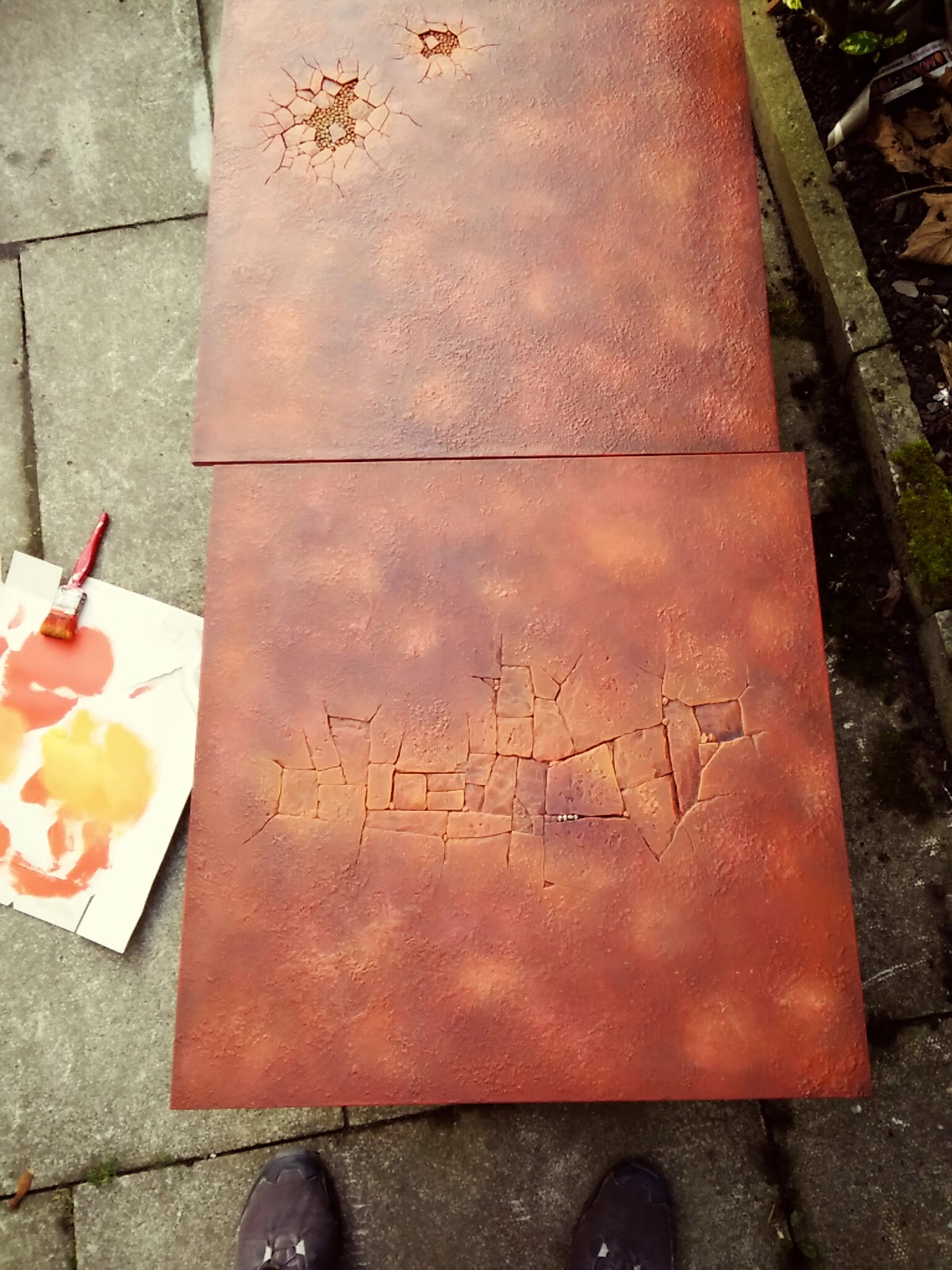 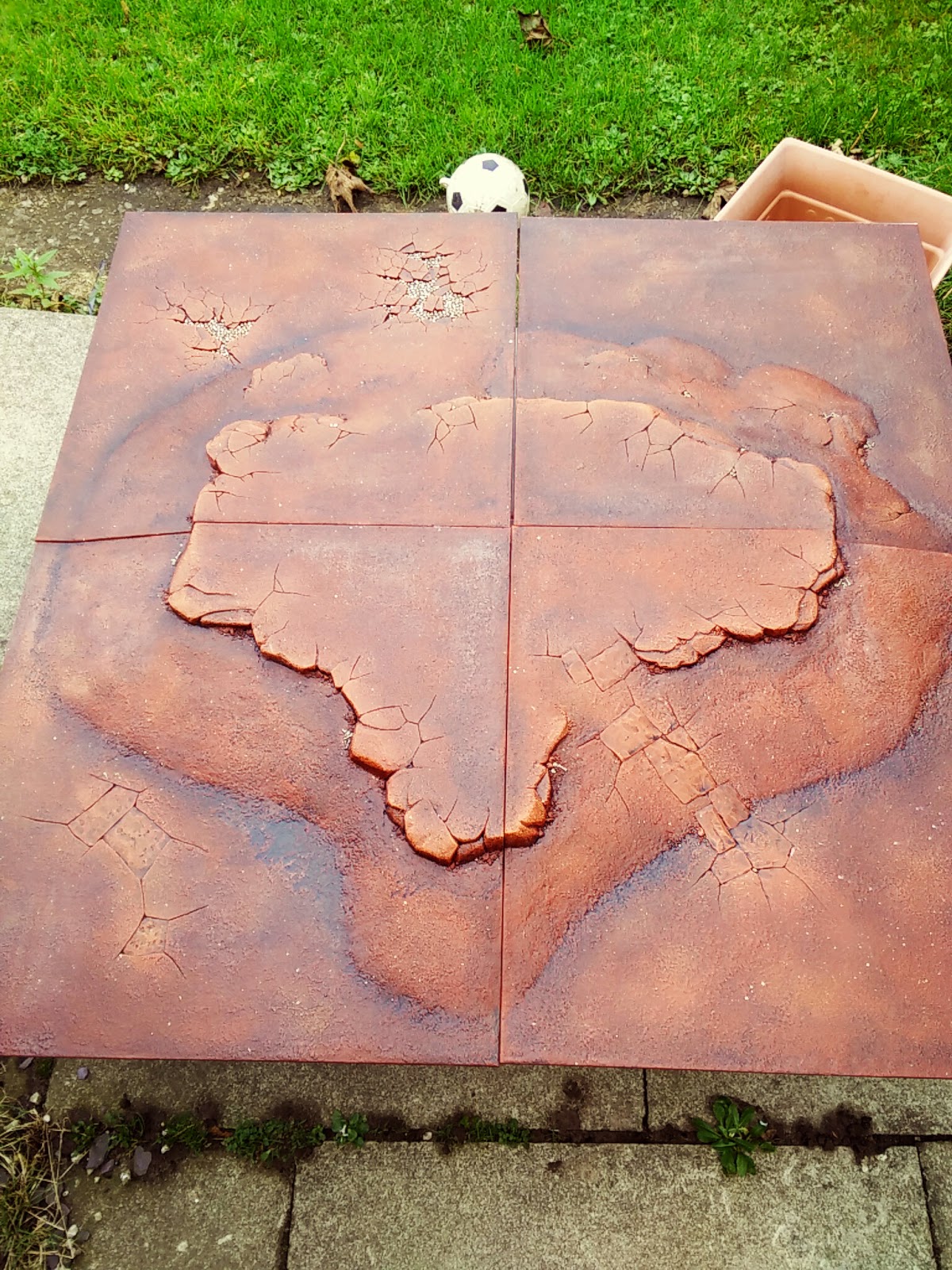 Overall I think I managed to recapture the original. 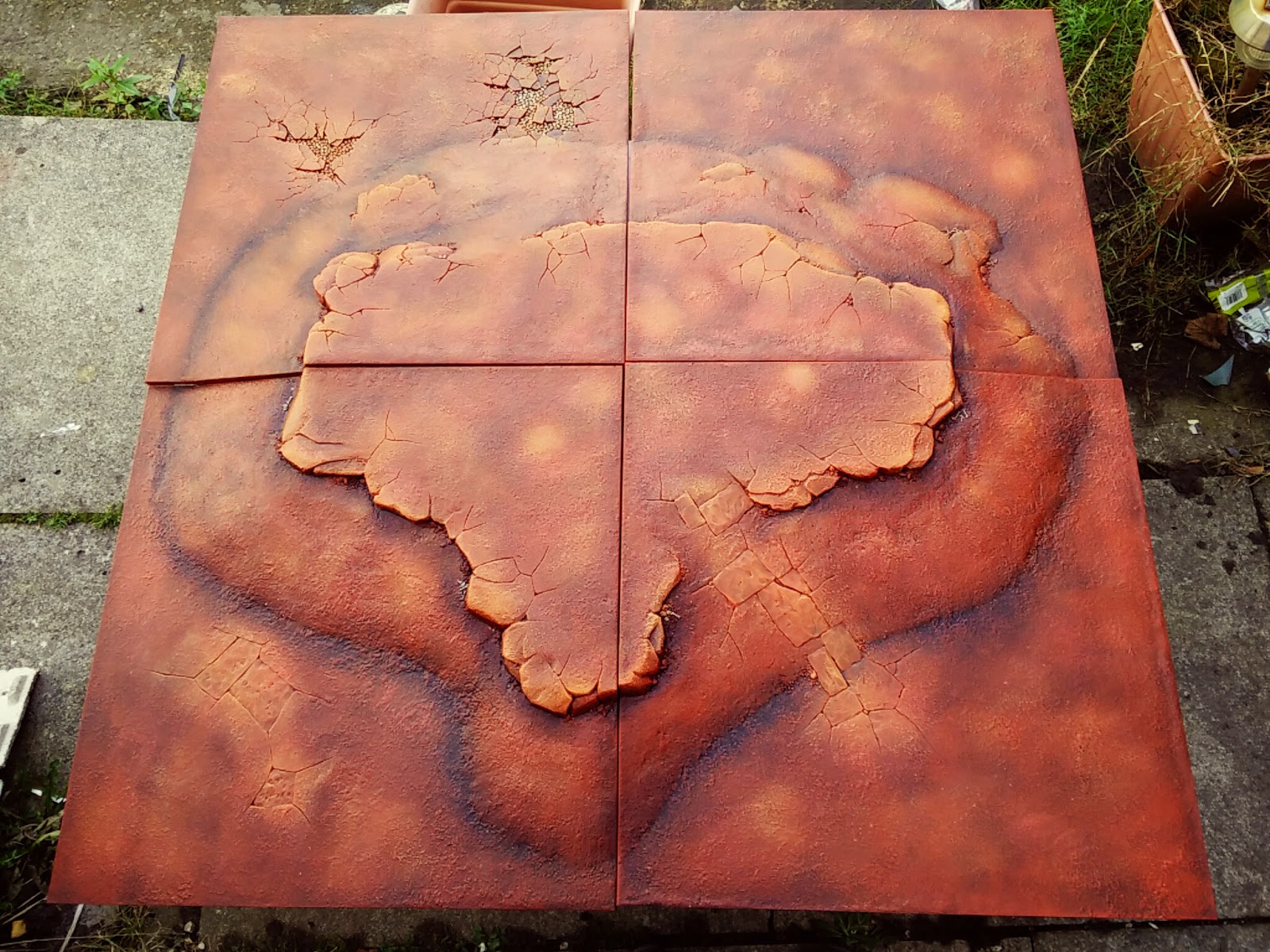 But the proof of the pudding, as they say, is in the eating [although the lighting is a little off between the two pics they are pretty much bob on] ...

Close up I may have added a little more Pumpkin despite the above picture suggesting otherwise. 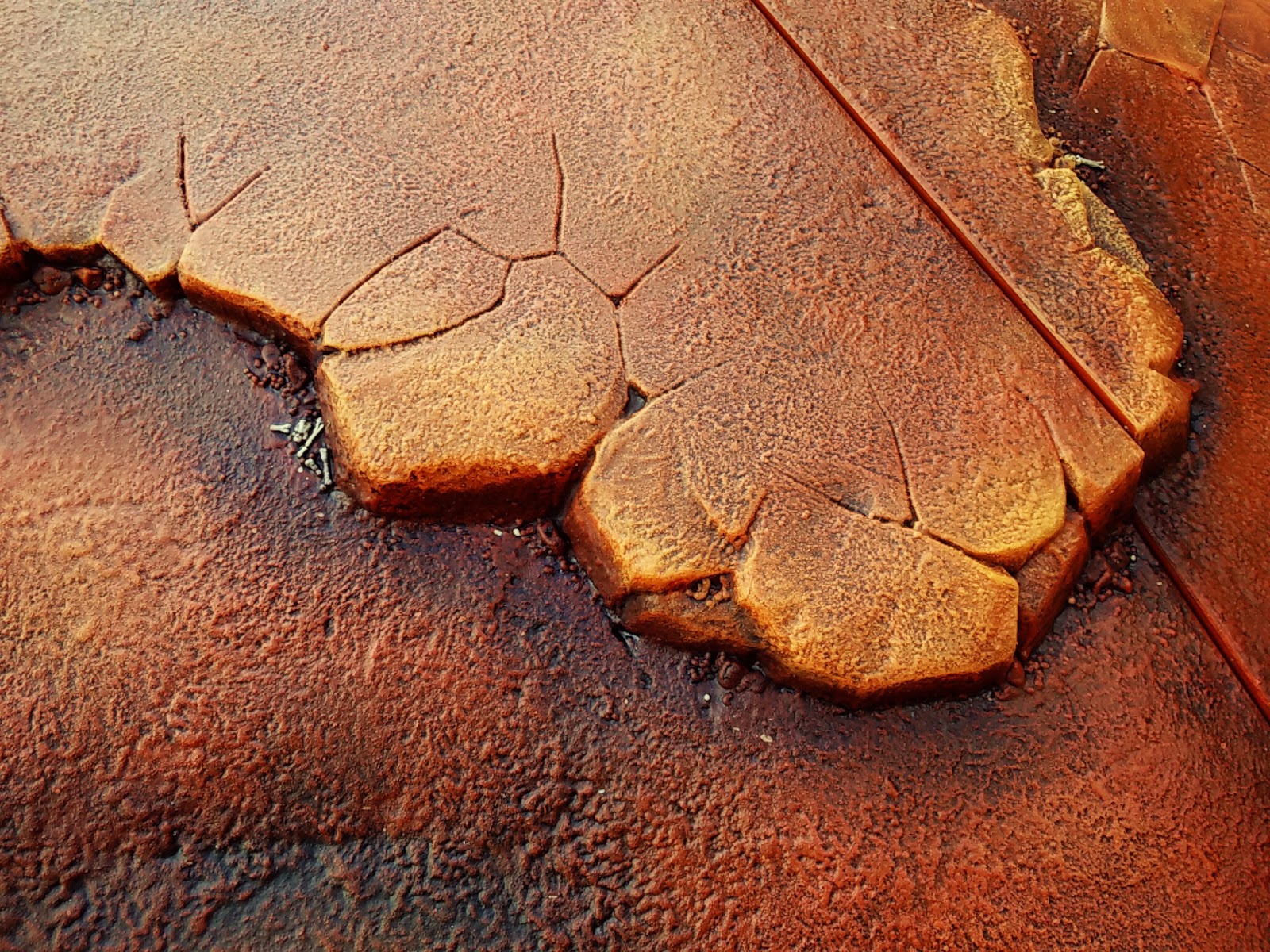 And on with the spatter. i managed to get some bigger blobs in some places, which was nice 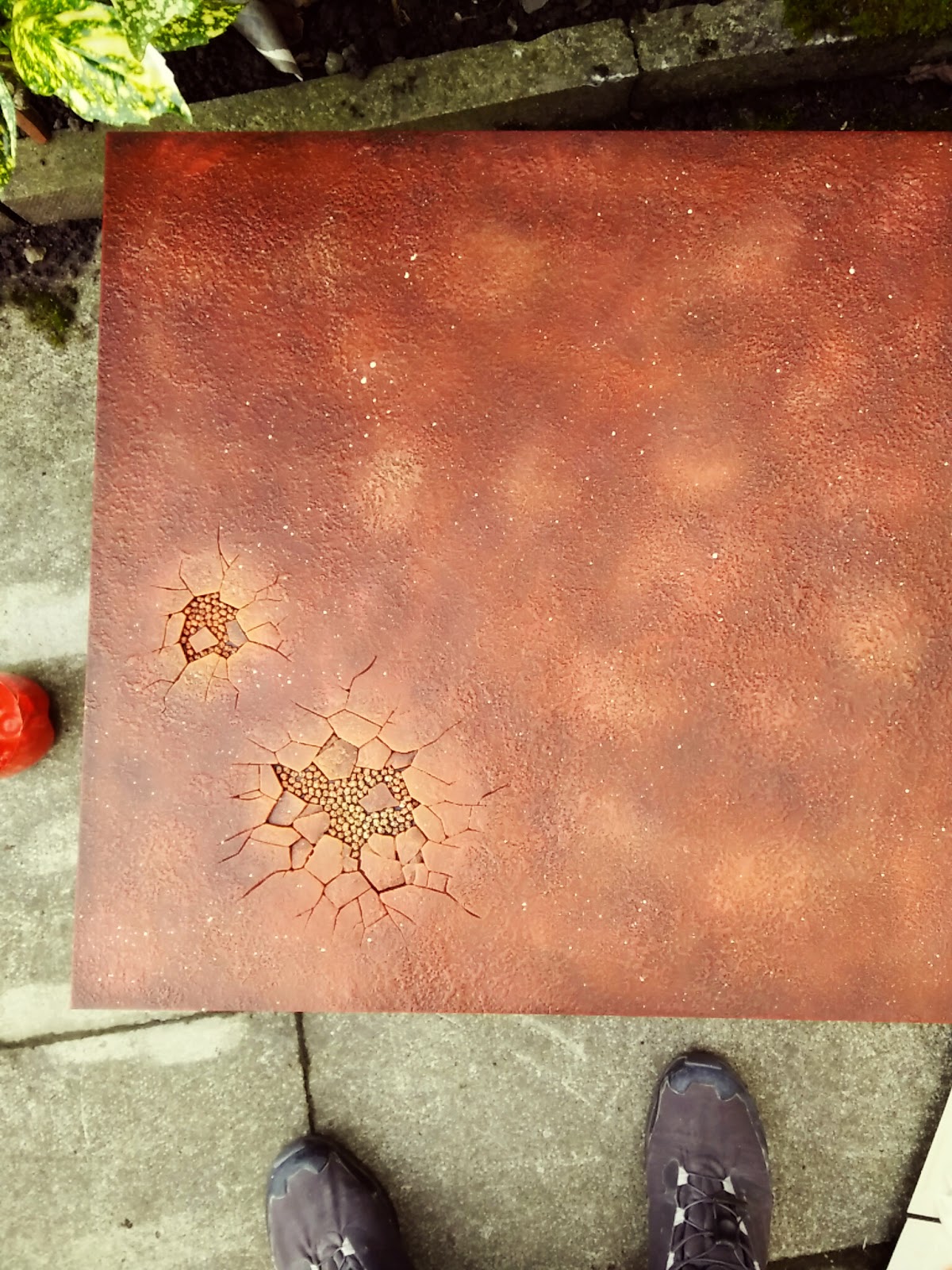 However, there is definitely a diagonal 'swathe' in the bottom left hand corner resulting in the spots having a direction. Not optimal but I can live with it after all the drama thus far. 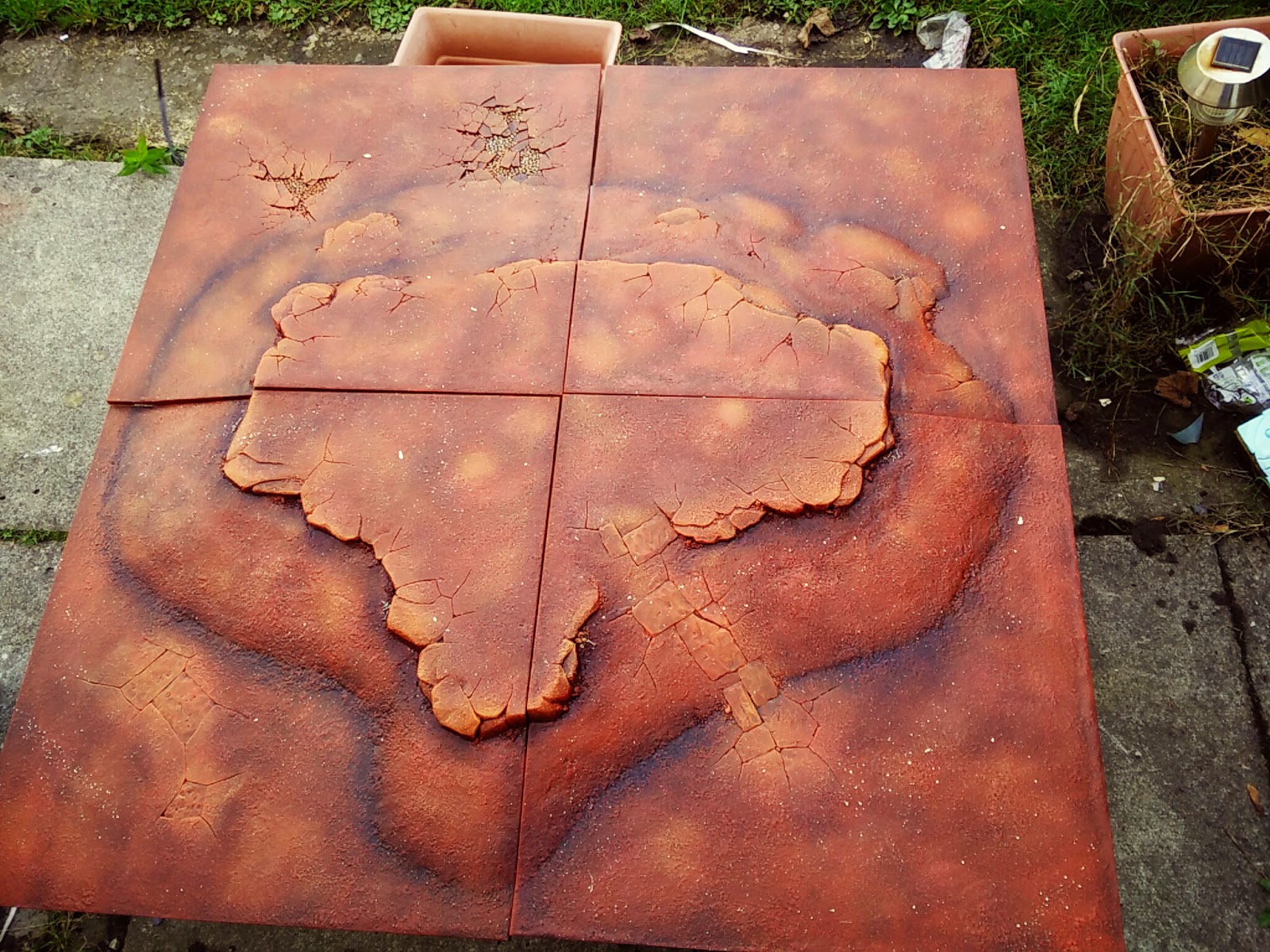 I did however object to the three larger blobs of Bonewhite, an example being the one on top of the hill. And so went at it with a damp cloth. Of course it didn't come off cleanly and despite a similar 'rescue attempt' on paint bristle last time around I didn't learn from my mistake and the end result probably looks worse than if I'd just left those three larger blobs. Clearly I need to have a lesson beaten into me to take notice! 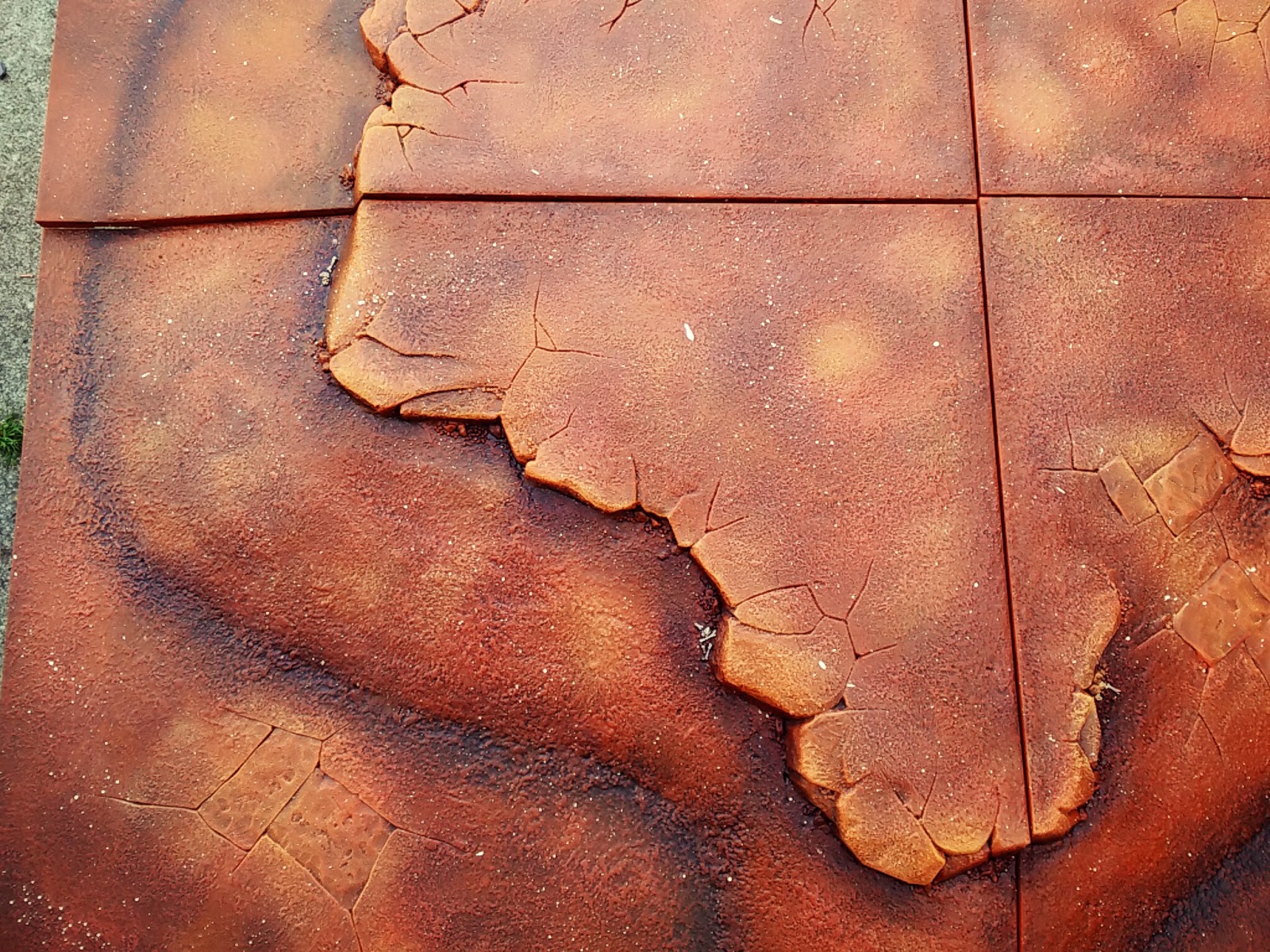