I 'ummed' and 'aahhed' quiye a bit about this but my decision was made a little easier when Alex released me from my promise to take the Skyshield. It's great and all but 7th edition deployment and the BW missions make it less useful. The limitations on list choices were relaxed a bit, I'd love to have had another detachment so I could run [swoop] two Flyrants but at least I got the Genestealers which hopefully play havoc with my opponents deployment. They're such a curve ball I had to take them. It's just the fact your opponent who has spent long and hard formulating a list that does something begins with 25 Genestealers within 6" [terrain permitting of course] of their setup. Suddenly you have to amend your plan and having put them on the back foot hopefully I can capitalise. Sure they're a potential easy First Blood sacrifice but it is five targets and I can go to ground in the ruin and when you add in night-fighting they can persevere. Meanwhile the rest of your army is unscathed... 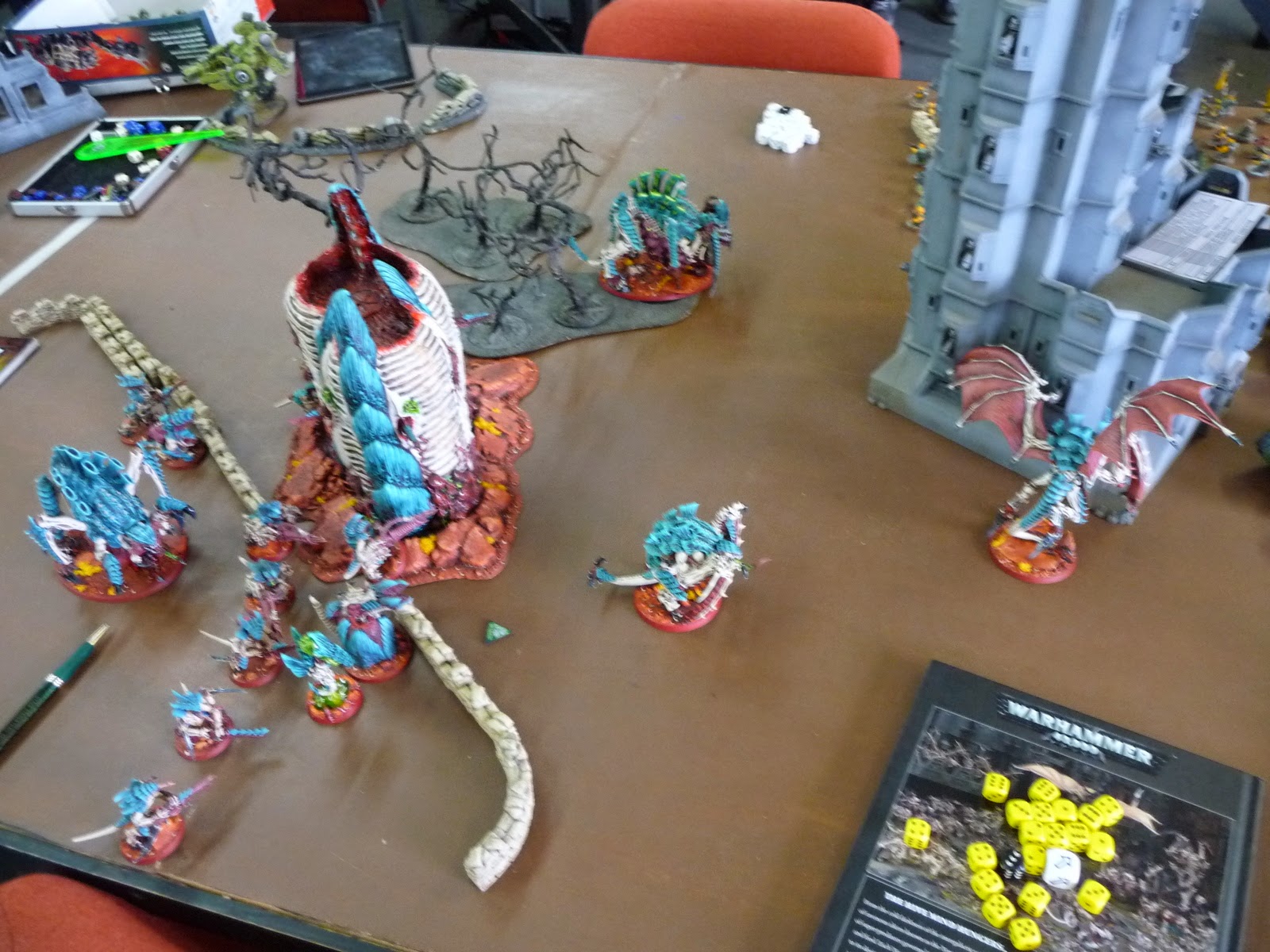 Of course I had to drop the Mawloc, Zoanthrope and Biovores from my last list to fit everything in. The Mawloc can work, he defnitely benefits from Deathleaper but I can't gamble on his reserve rolls and his killing potential can be questionable. The Zoanthrope is a loss, the extra shooting BS on the Quad Gun, Synapse and +2 Warp Charge and powers. However the Venomthrope gives me mobile cover, which is more a hangover from when it was on the Skyshield but think it'll do well extending it's cloud from the Bastion! The Biovores are a loss too, but although I've seen them become more effective over the last 10 months I've actually found them less worrying for my opponent. Previously they were targetted no matter what and succombed regularly. Nowadays I still have both pottering around. When they work they can do a number but they're still a bit hit and miss.

I lost a unit of Warriors too from my last list but I managed to keep the Two Tervigons which will hopefully provide the Synapse and extra bodies. I may have a lot less firepower but I'm hoping I have staying power which for the objective missions will gain me the advantage. I've got 96 models with two lots of spawning which will be extremely effective this time around, the Hive Mind assures me of such. So it's all about the numbers. Looking at the other entries, which is sadly not as many as BW7, there seems to be Space Wolves, Eldar and Crons aplenty, we'll see what I face and whether it includes Ben, Liam or PeteB who will be attending also. 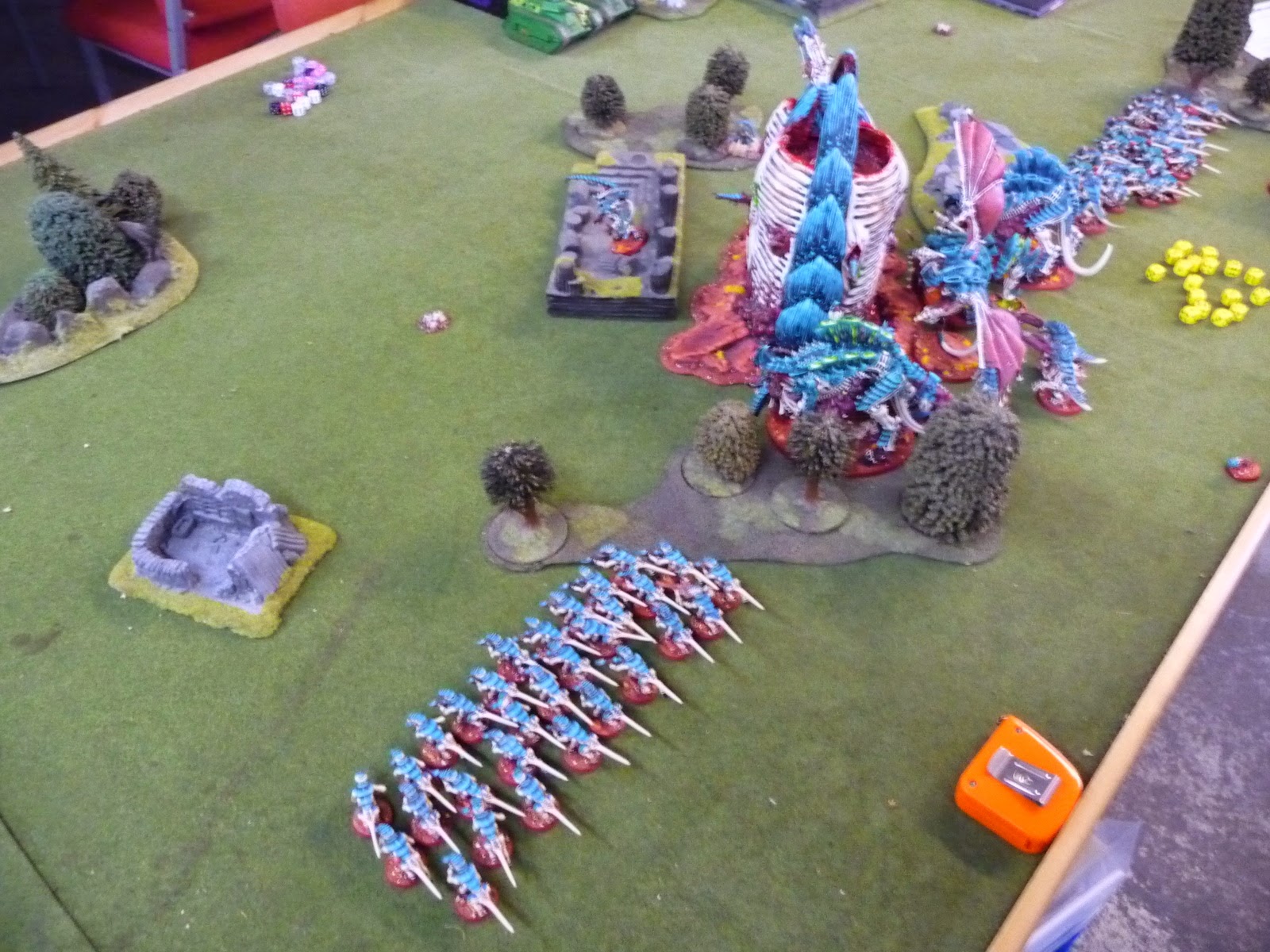 Ultimately though Blog Wars is a fun tournament, it's meant not to be too competitive and although I find 1850pts in two and a half hours quite pressuring, especially as I've gone moar horde than last time, I really hope to have a fun time. BW6 I actually came 4th, BW7 I was 12th but both times I managed to lose games stupidly and then balance that out with ridiculous wins of maximum points so the end result is not important. Hopefully BW9 will be back up to numbers, apparently there's one of the National 40k GT's on in Manchester on the same day so that may explain why some folk aren't attending. I'll definitely be pushing BW9 for Alex next year, its' a great event and when you put in the effort to make it happen it deserves to be a success, thankfully there are enough numbers for it to break even and have a decent raffle and prize fund regardless.