Sam Georgiou was up next, Josh's gaming buddy. He had Grey Knights, with White Scar Allies. I haven't really played against Grey Knights since PeteB got rid of his. If you recall PeteB often ran two Dreadknights so I should have been a little more prepared but I've probably forgotten much of my tactics.


The low down:
Unfortunately I forgot to take pictures until after turn 1 so you'll have to make do with the following description of the action. I was lucky in that our board had plenty of ruins so I had plenty of options to deploy the Genestealers successfully.  However Sam set up a unit of bikes in the right hand ruins, denying me access to the far right one but seemed to miss the fact the one further into his DZ had a first floor, so I deployed a unit there. 2 Broods were in the centre ruin and Deathleaper was to Deep Strike. In my turn 1 the Flyrant swooped towards the bikes that are shown driving off to the left. Brainleech worms did some significant wounds and Sam tanked them on the Space Marine captain who promptly failed his saves, died and gifted me First Blood! 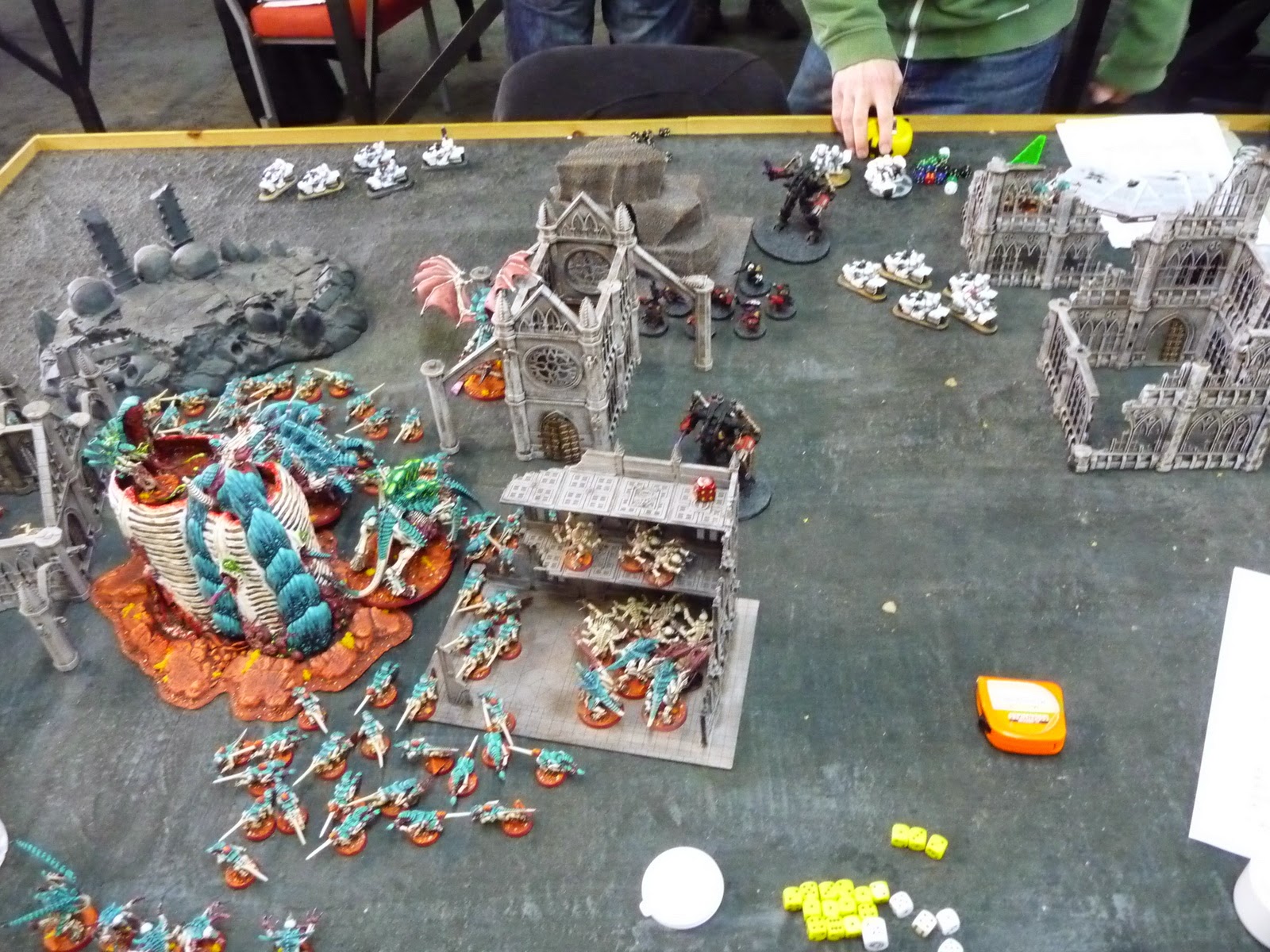 My objective was in the Cathedral, surrounded by a brood of Stealers. I moved the Tervigons forwards hoping to push towards Sam's objective and reinforce the middle one I already owned. I foolishly forgot to spawn more gaunts. in fact thanks to trying to cast Warp Blast I forgot a number of things as because it's a Witchfire you automatically think you're in the Shooting Phase and carry on shooting and miss elements from a previous phase. I spread out my gaunts hoping to cut off the bikers that were trying to flank me and sneak for my objective. 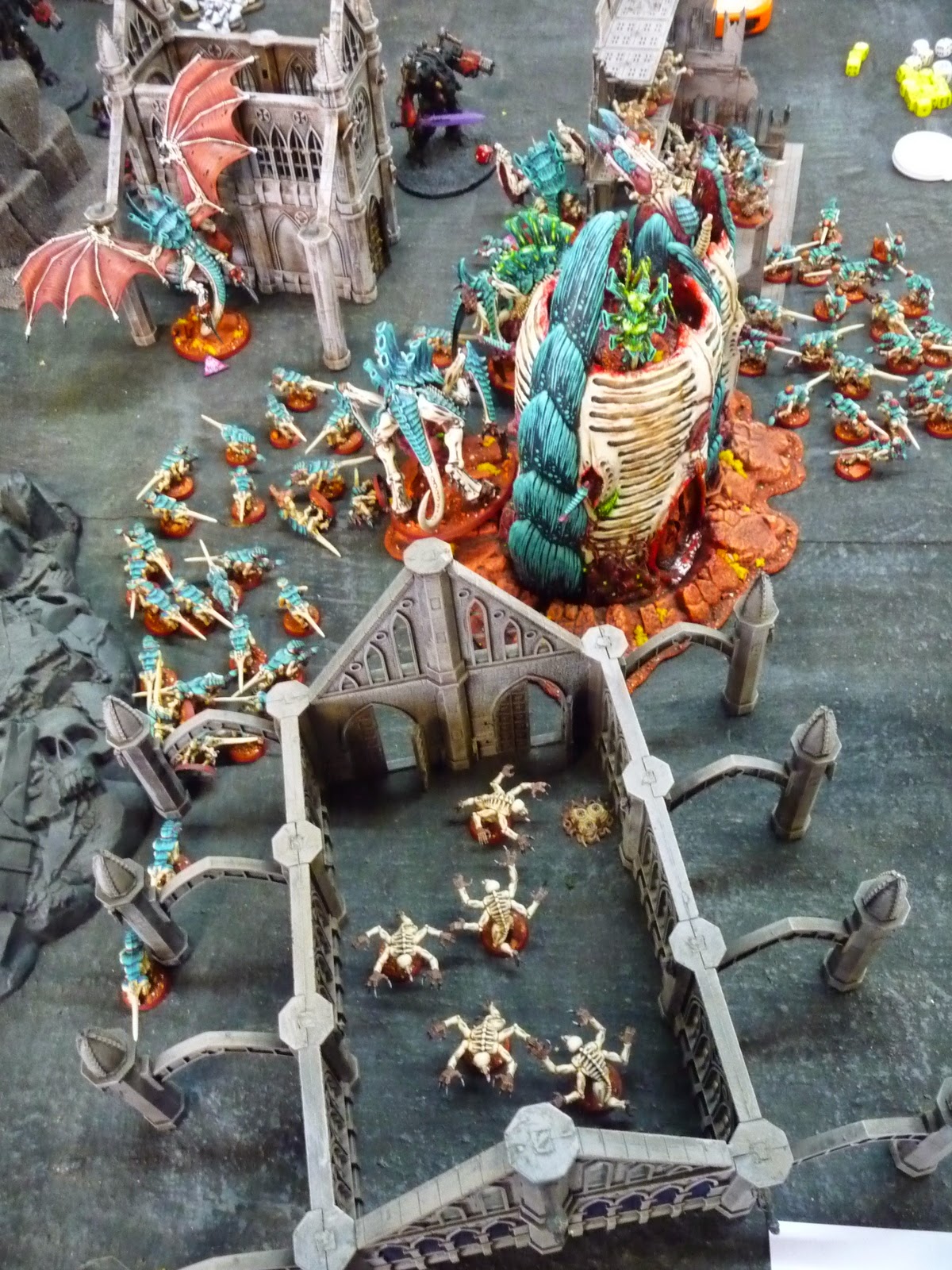 I also deployed a brood in the cathedral in the centre of the board, with the centre objective [I only put one Stealer down as it was difficult to get my hand in]. 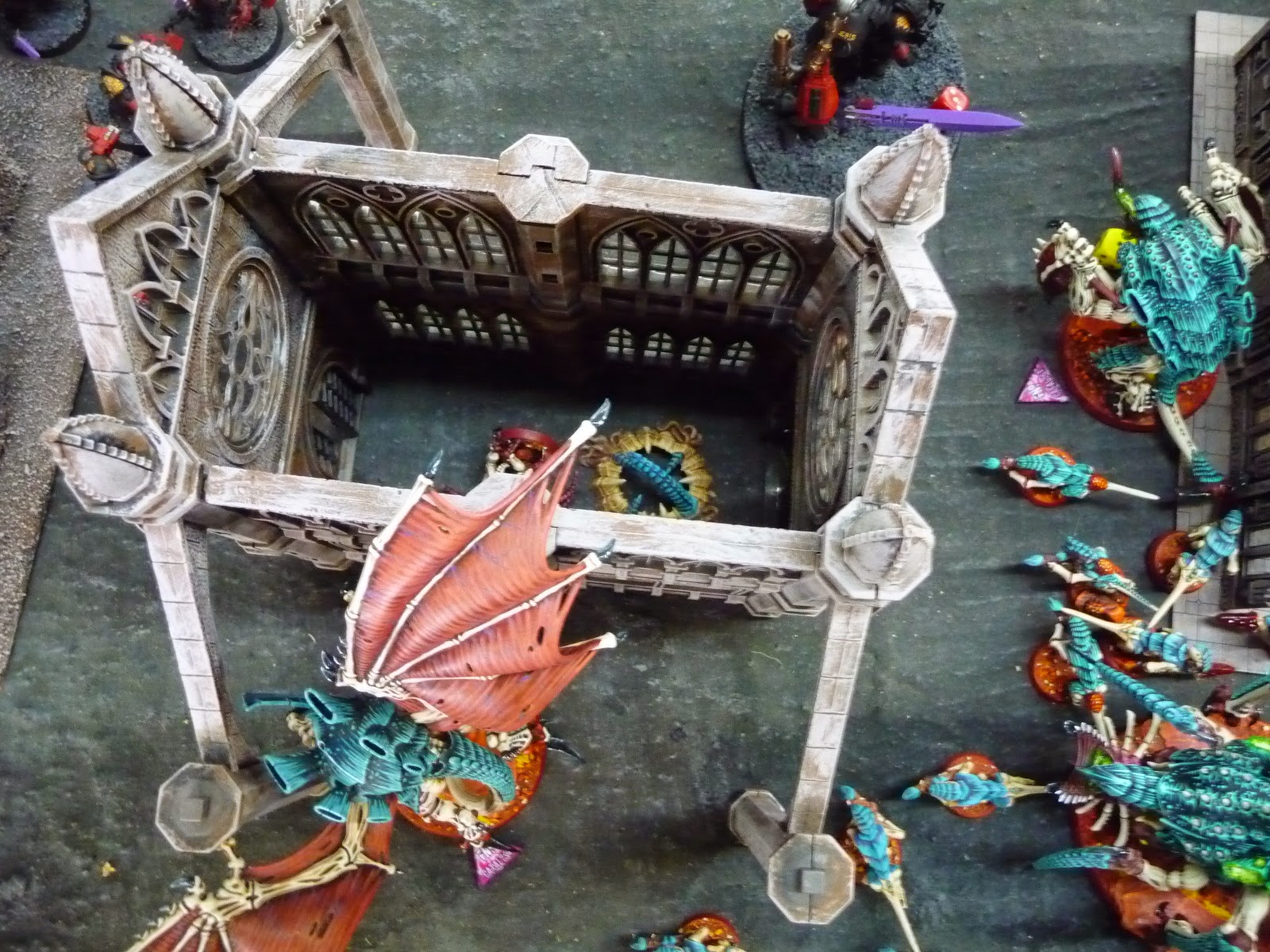 Sam's objective was behind this hill. 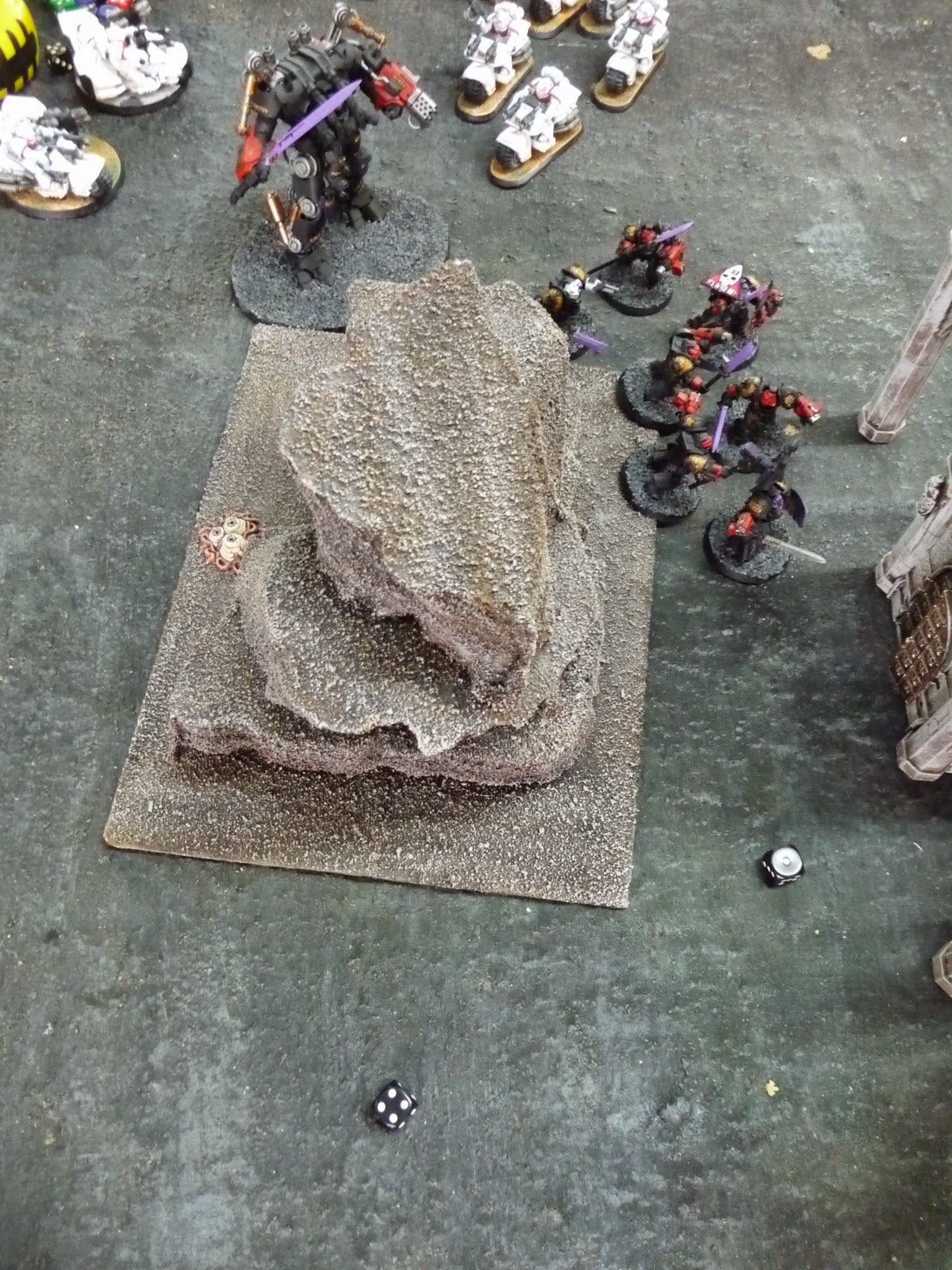 Sam then decamped from the ruins and headed for his own objectives, moving the Dreadknight backwards to deal with the Stealers in his DZ... 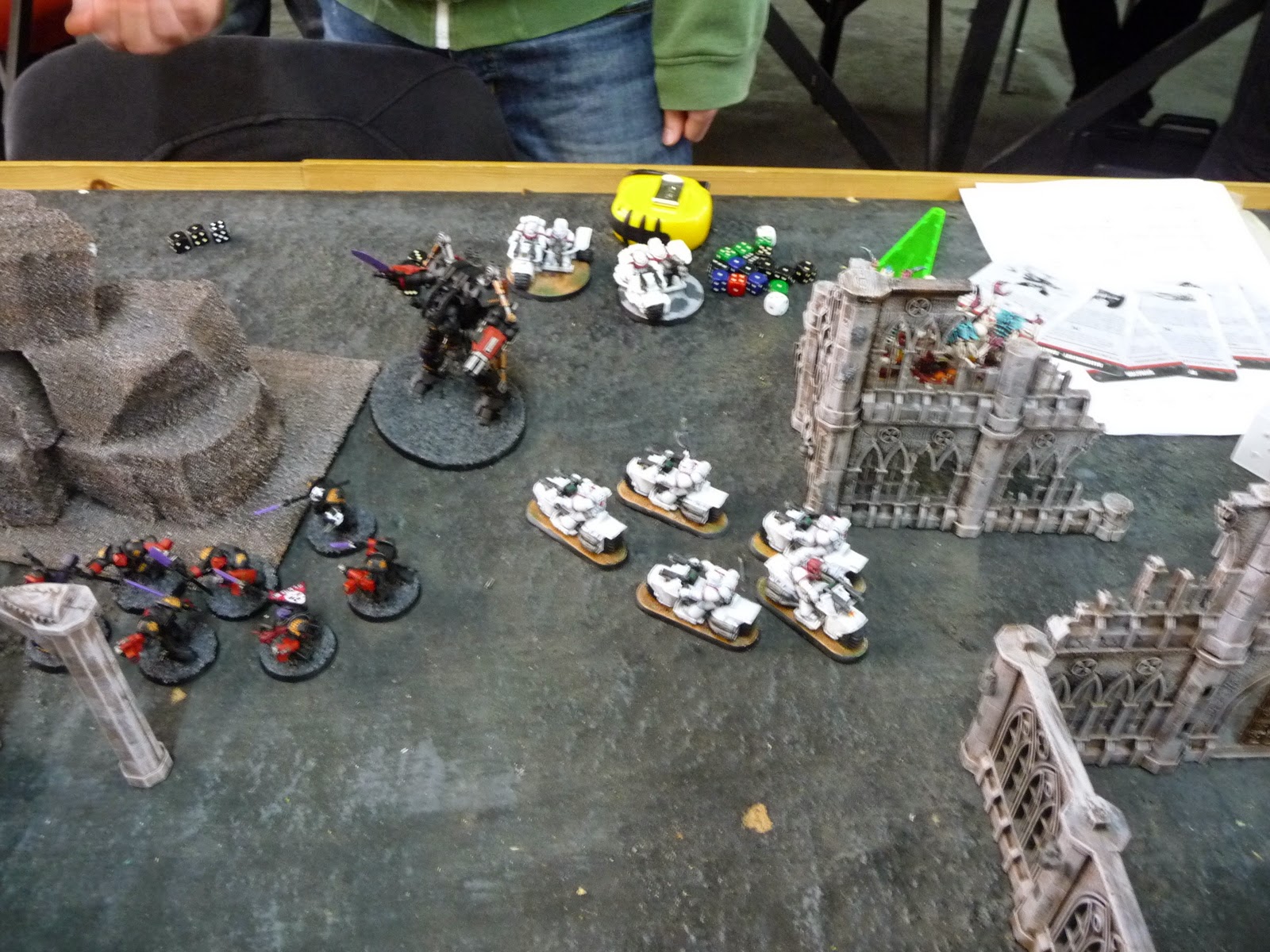 which he promptly did by roasting them alive. 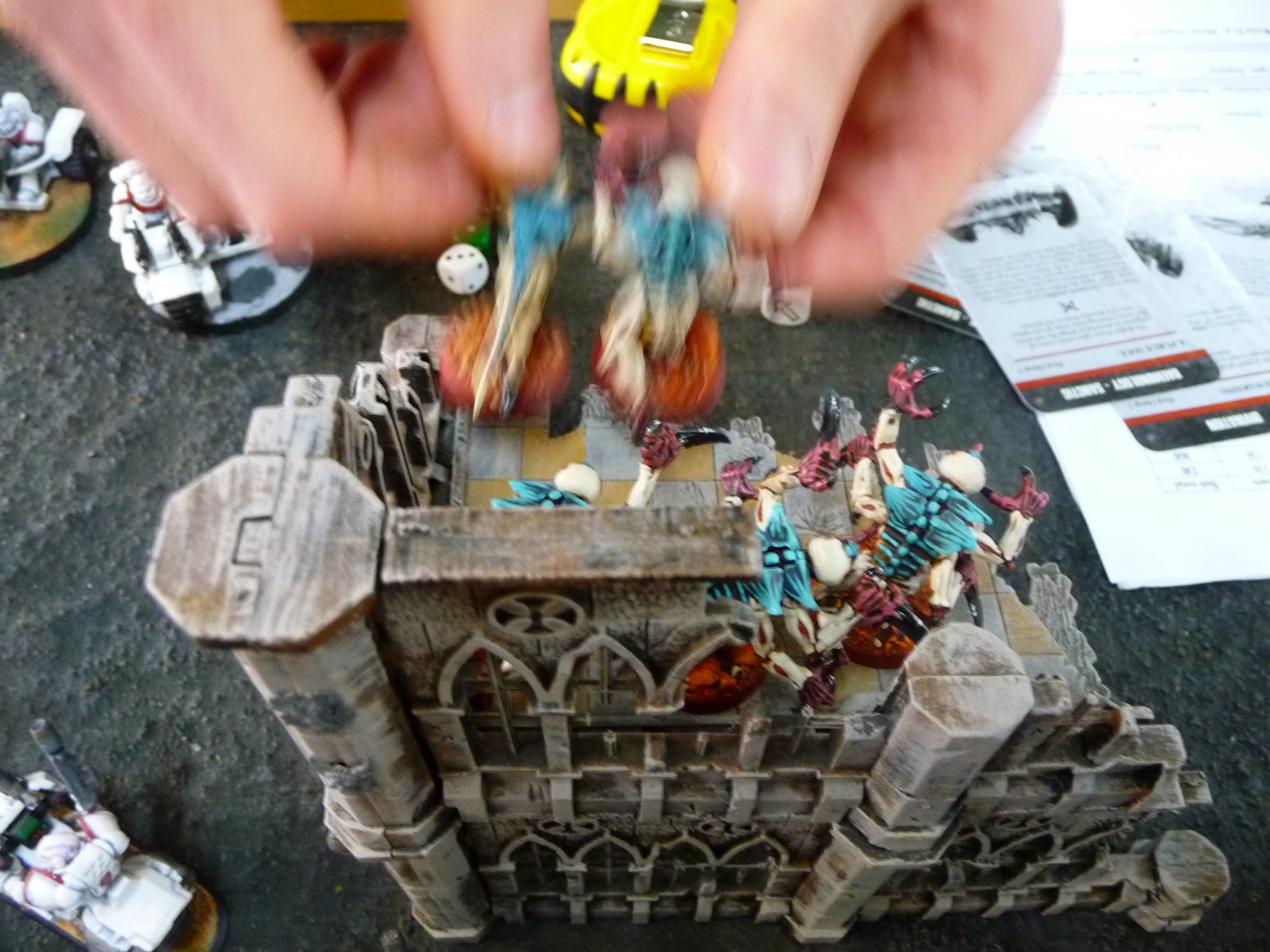 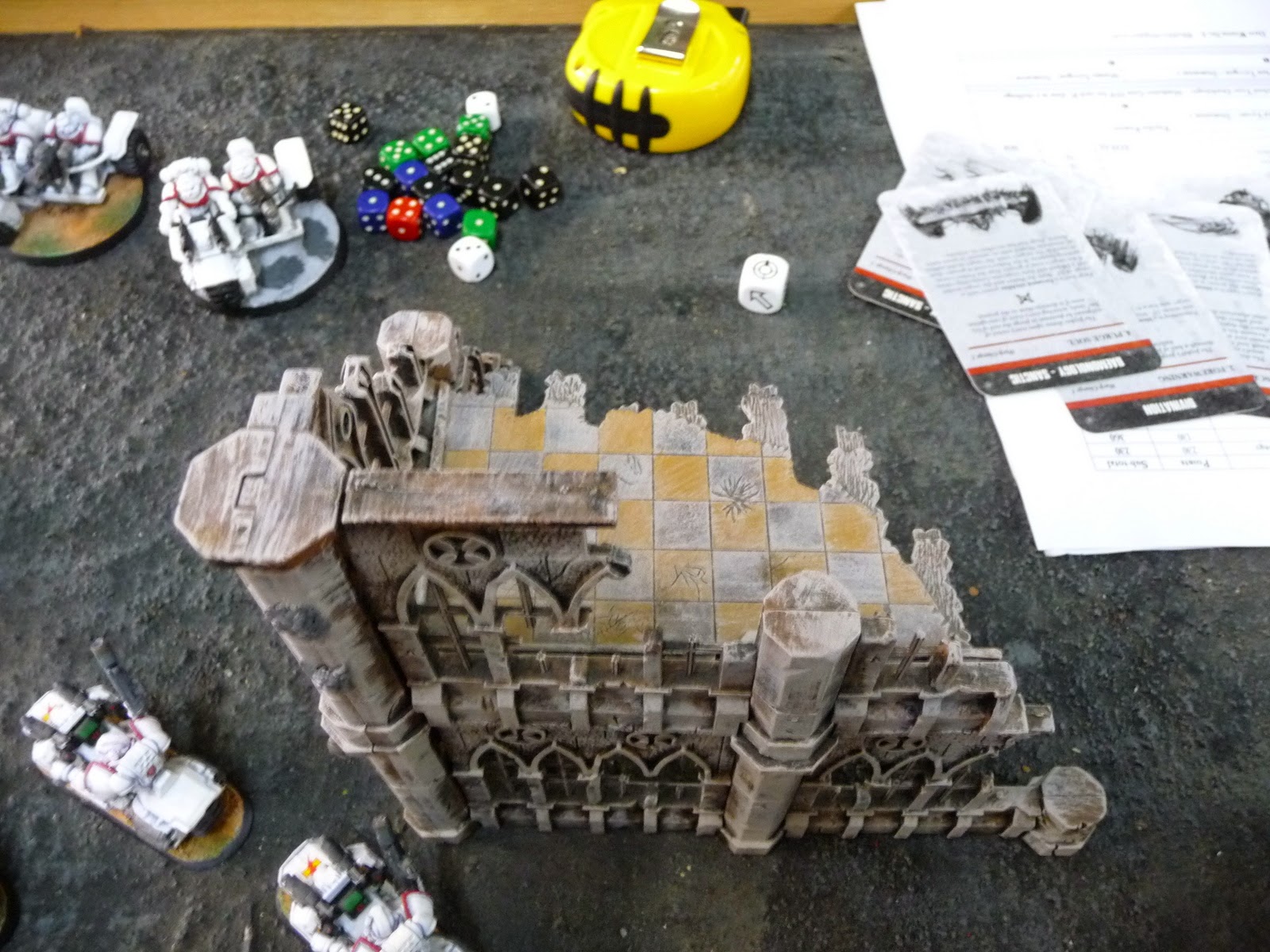 The Carnifex managed to do some damage to the dreadknight. 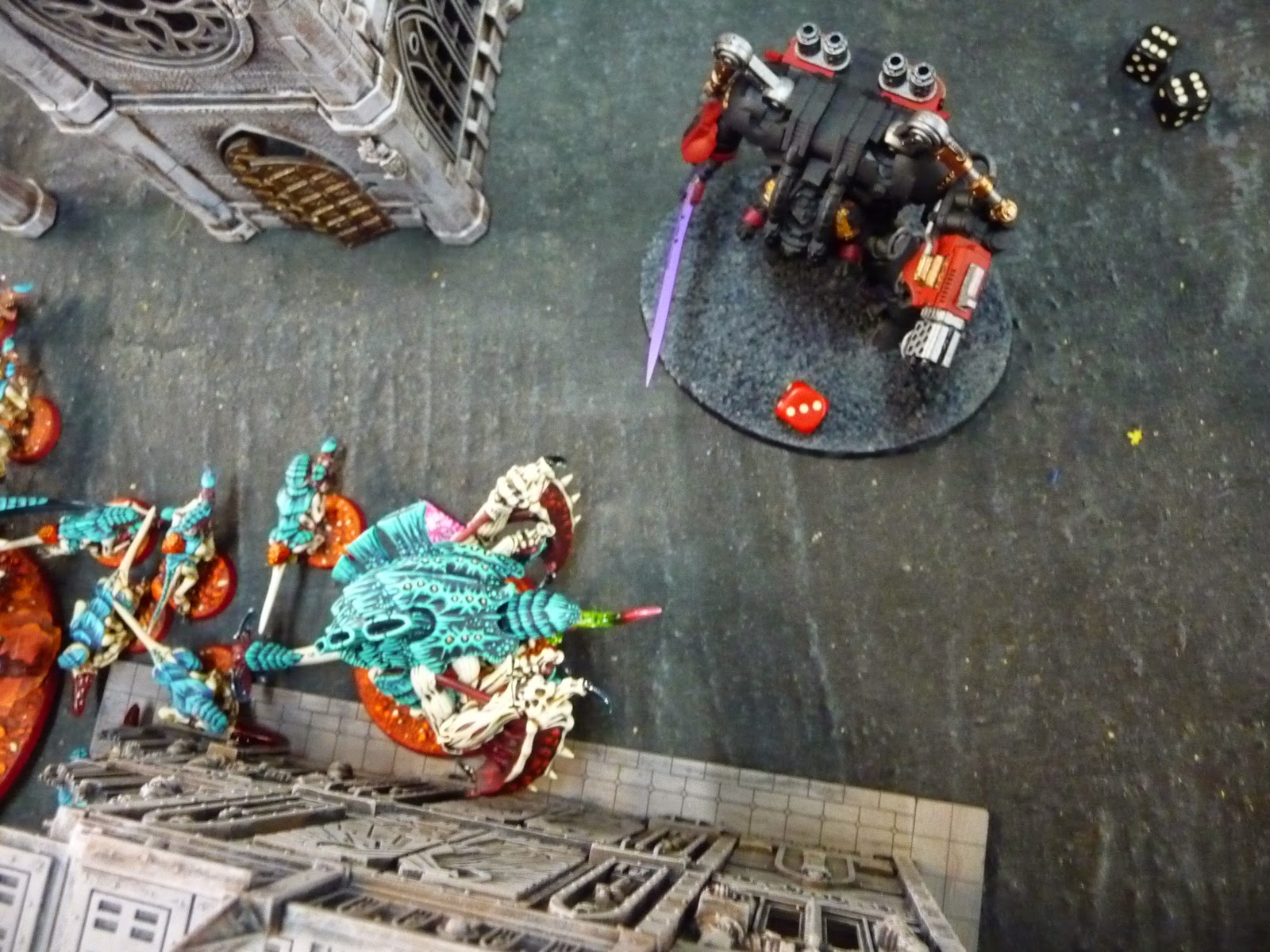 But was clearly punished for it's temerity, even with Catalyst and it's Feel No Pain. Honestly, all the hops you have to jump through to get the power and then it doesn't flippin' work! 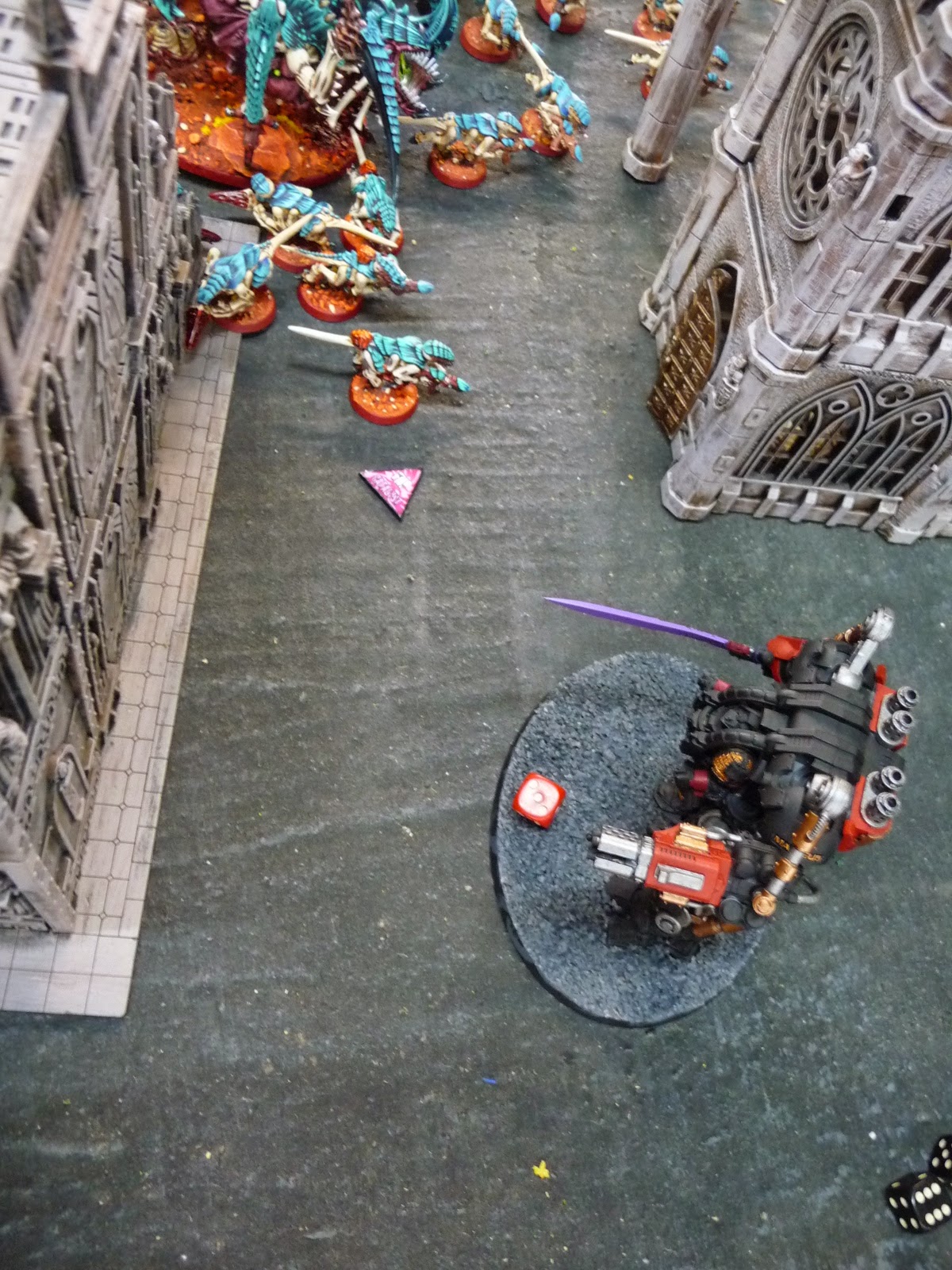 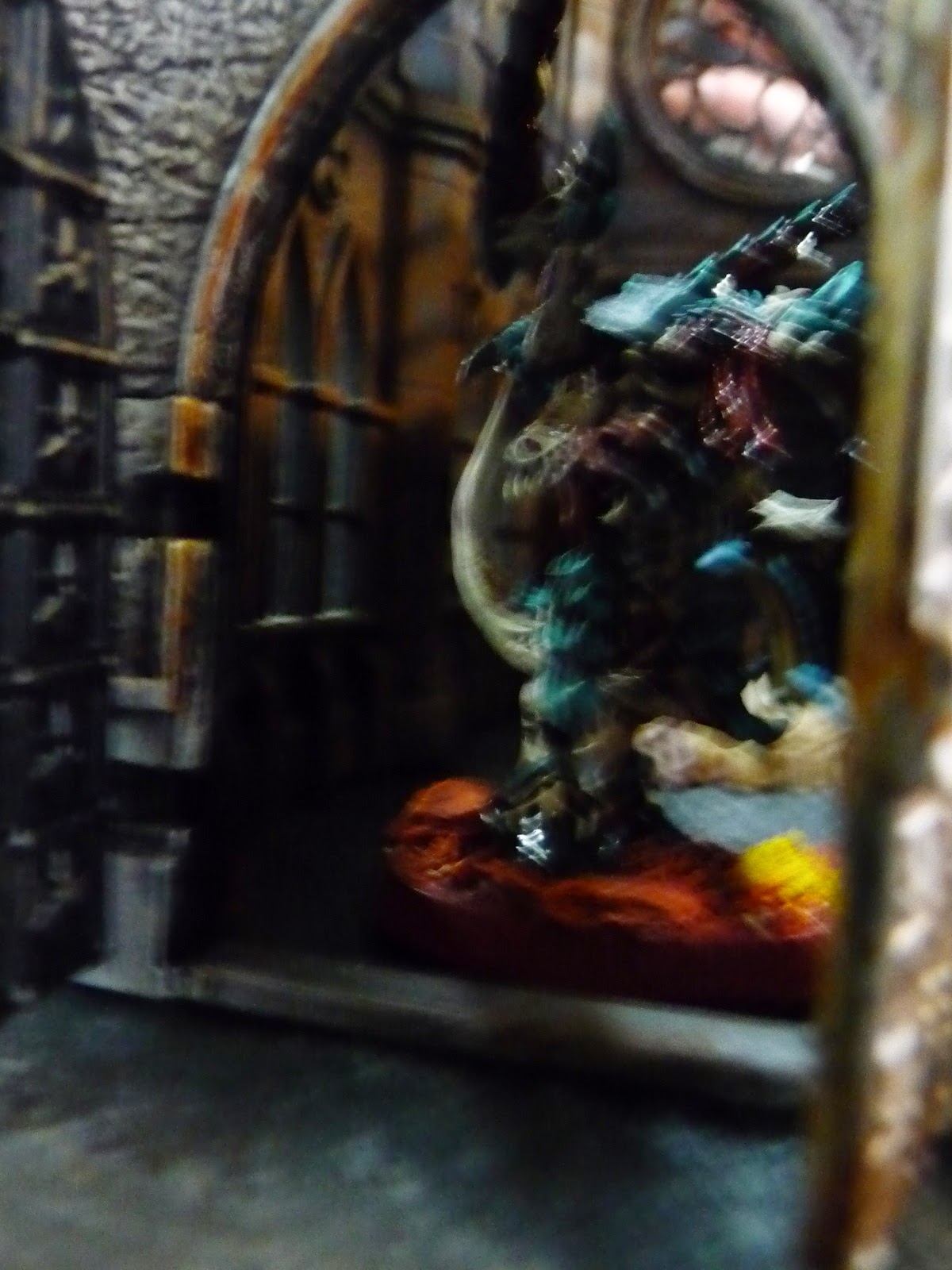 Shooting at Draigo and his Grey Knights but doing little. He then closes the doors and waits. 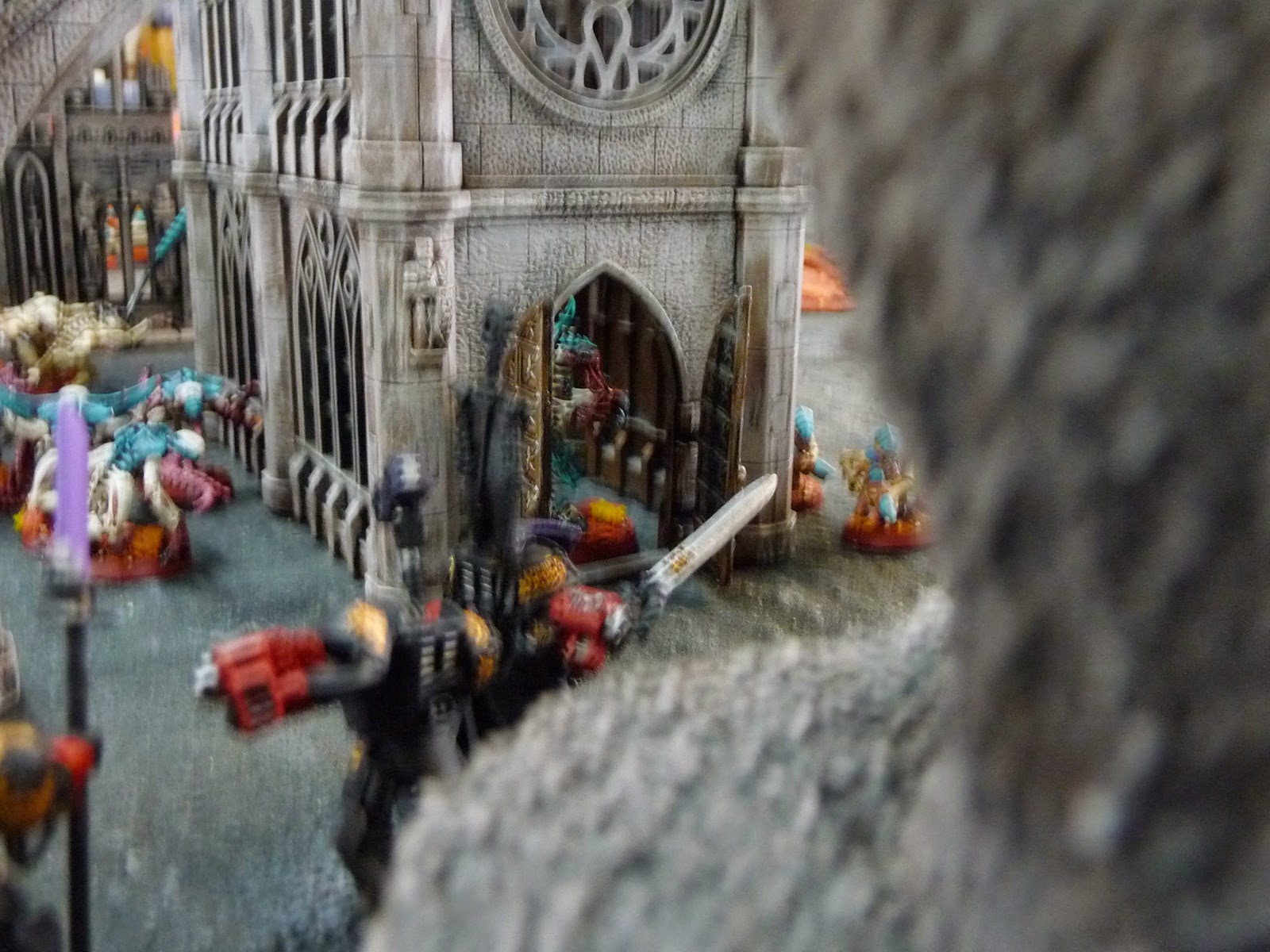 I charge the Genestealers into the Dreadknight, but can't bring myself to throw in the Tervigon too as I'm convinced it'll just get pummelled taking the Termagants with it. As a troop I need to keep him safe but this may have been a tactical error as the Stealer fail to capitalise on their weight of attacks on the charge. 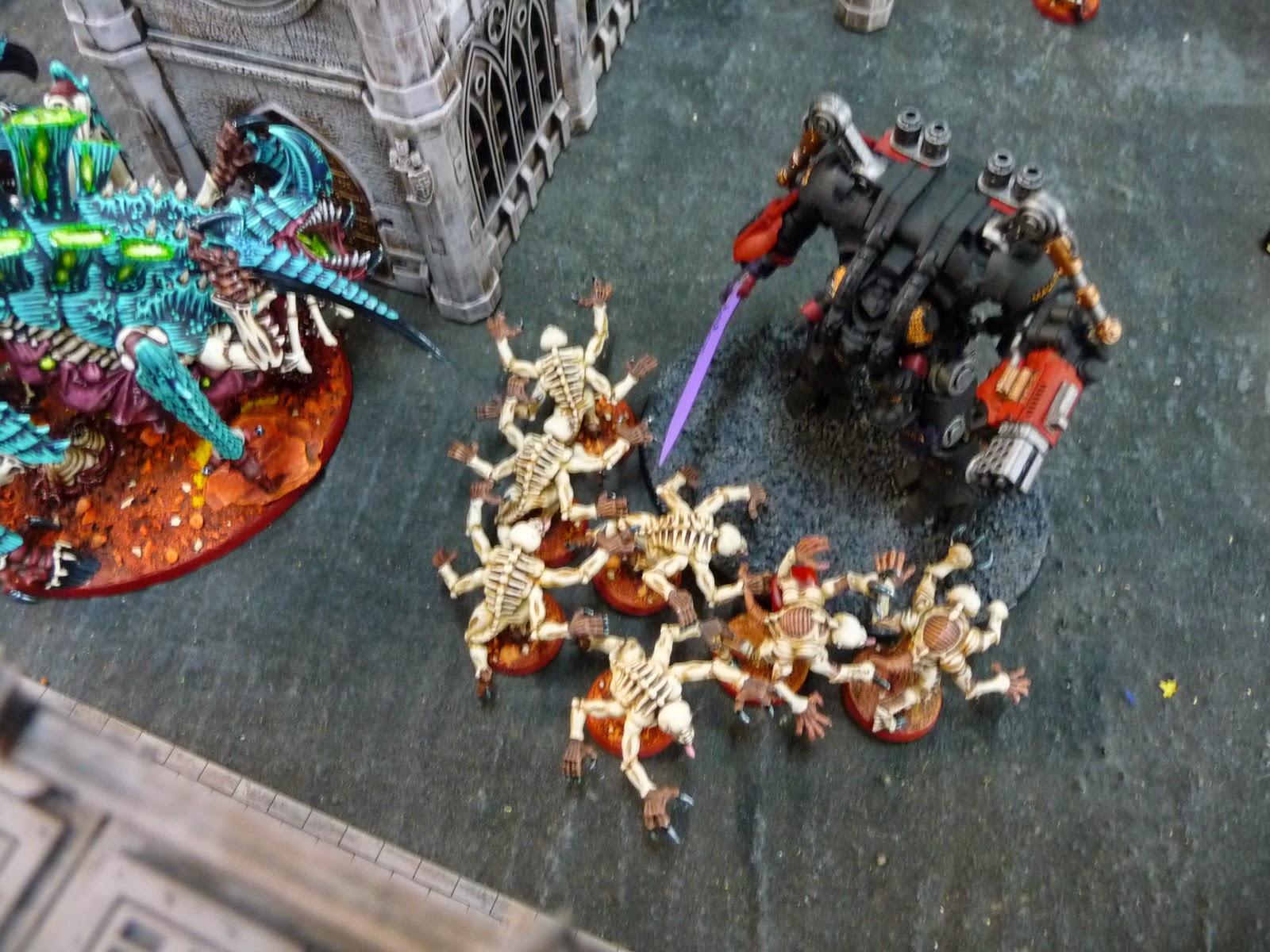 With the Tervigon and some spawned gaunts holding the centre objective the Stealer brood  sally forth and assault the Terminators, one Grey Knight falls to the ultimate assault creature 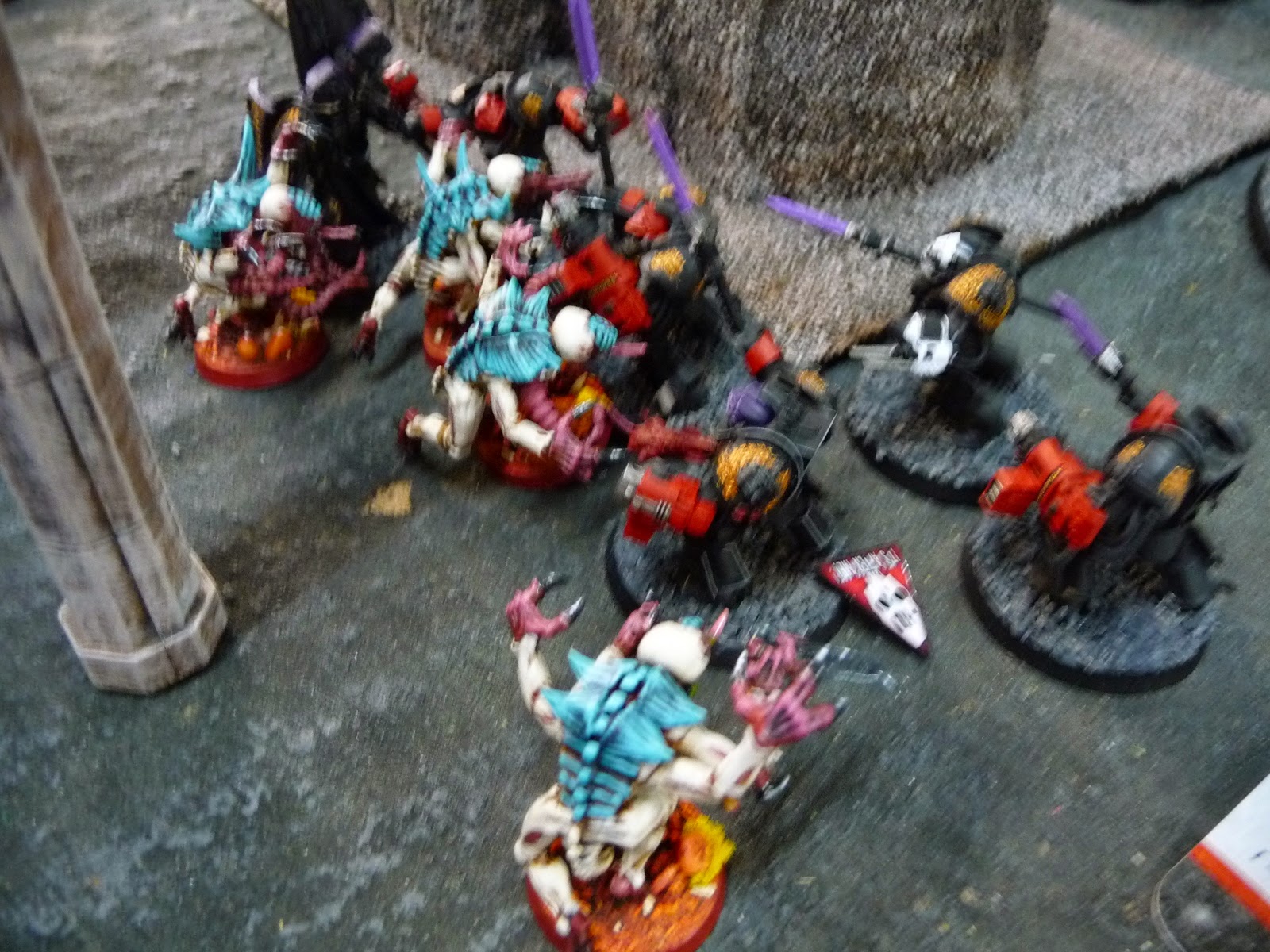 3 Genestealers fall to the chopping Halberds and Hammers [sounds like an RPG]! 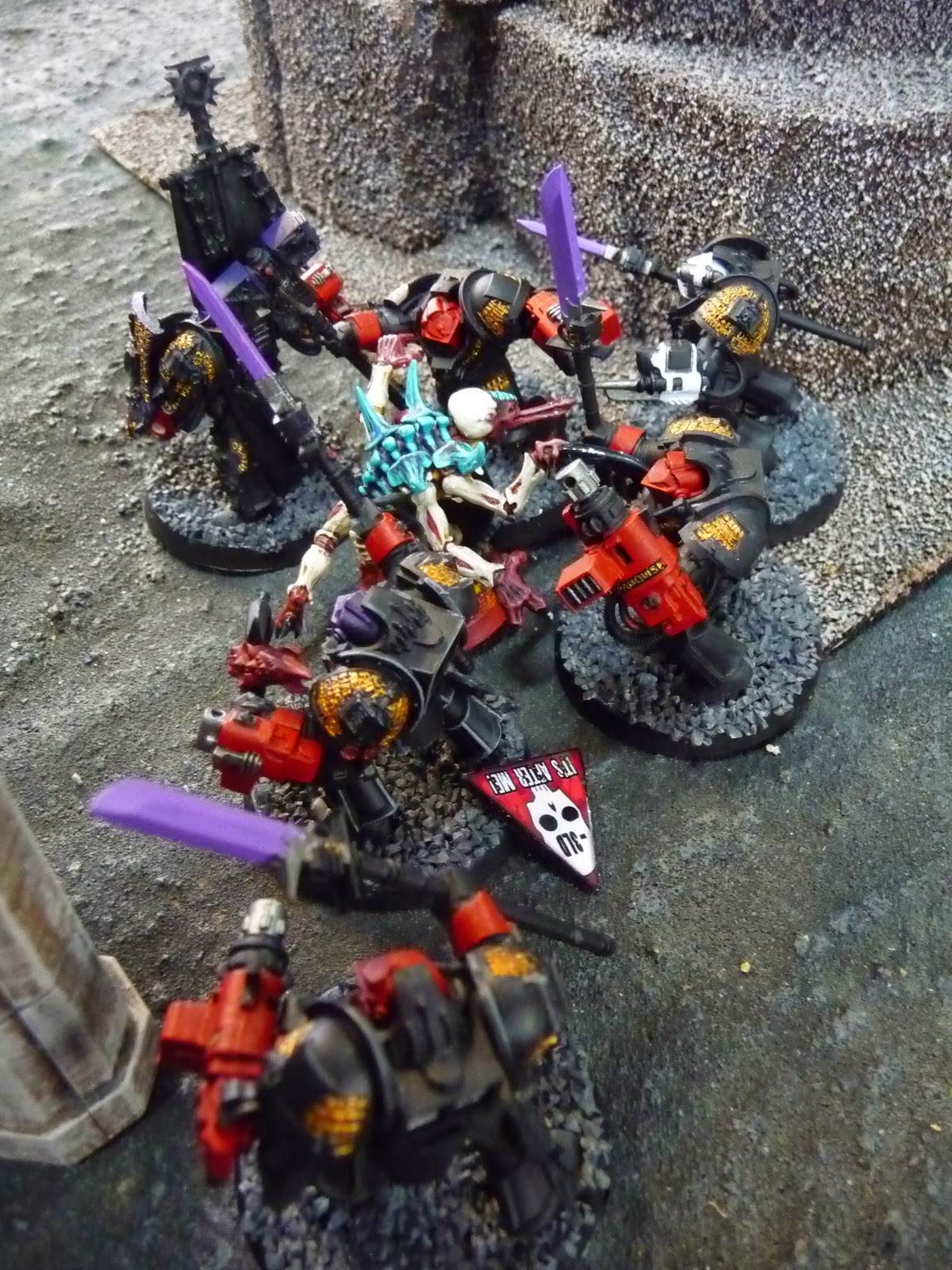 The second unit of Knights drop in behind my line, Sam went bold and only deviated a couple of inches, sadly no mishap and Interceptor on my Quad Gun does nothing 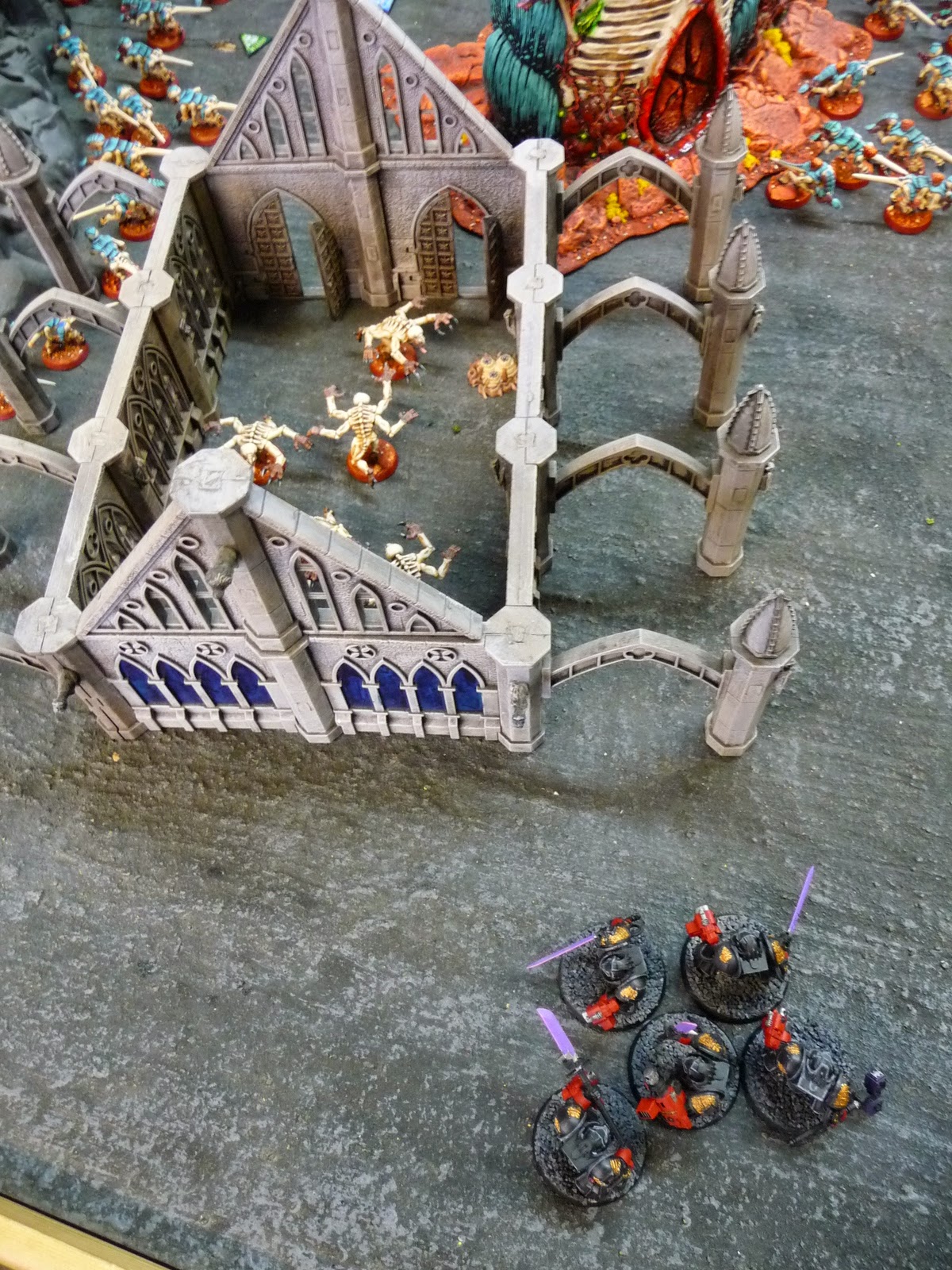 Unfortunately they can't really see anything to shoot so I get a healthy cover save meaning my Stealer remain intact while the second blob of gaunts head behind the Bastion to reinforce my objective and bubble wrap against the Paladins. 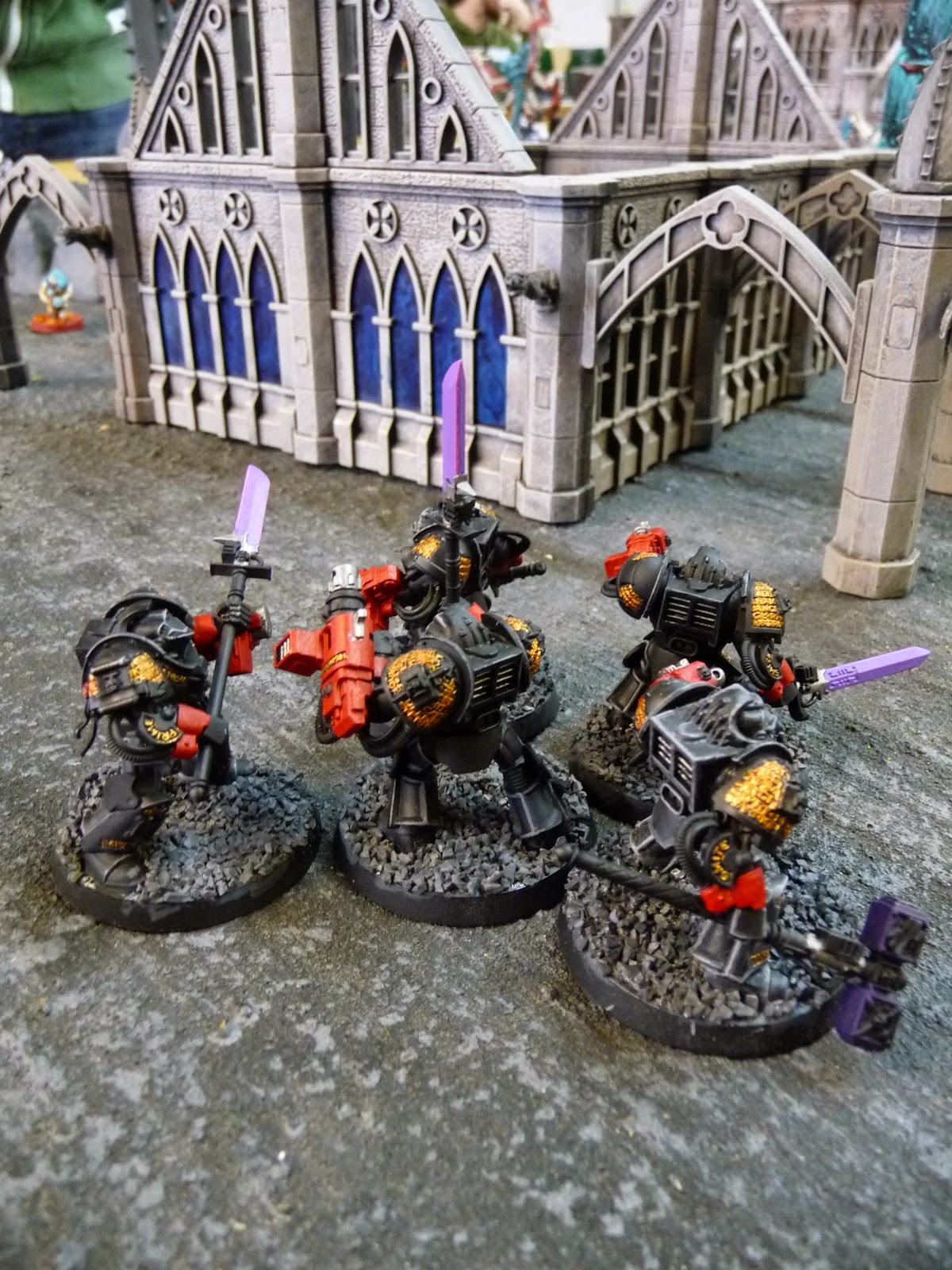 The other gaunts spread wide but that dreadknight can jump so they won't stop it, then again I probably should have charged and locked it in combat but I was trying to make a wide screen offering options to all three objectives. 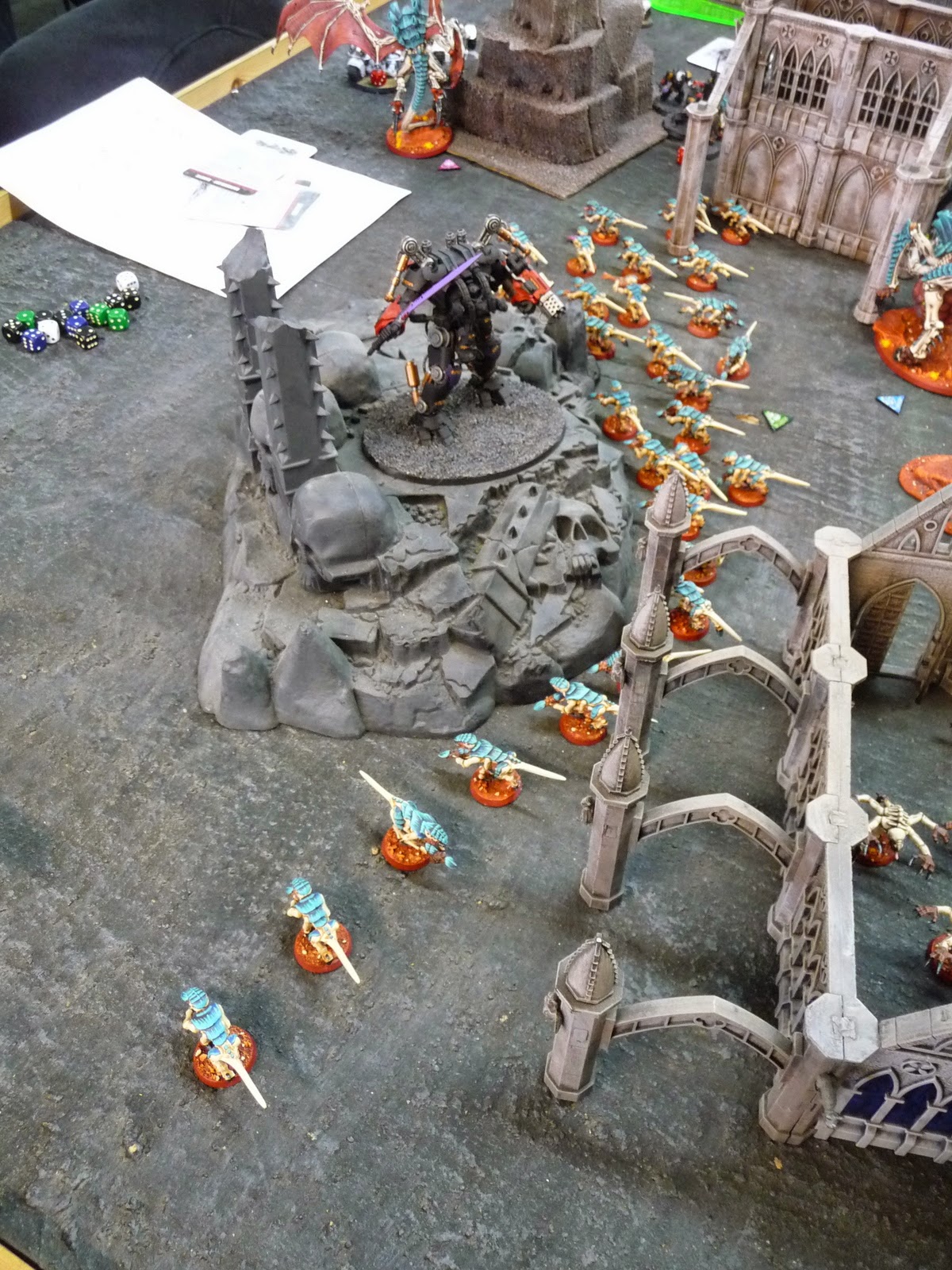 Bikers and Assault Bikes multi-assault my termagants locking them in combat. 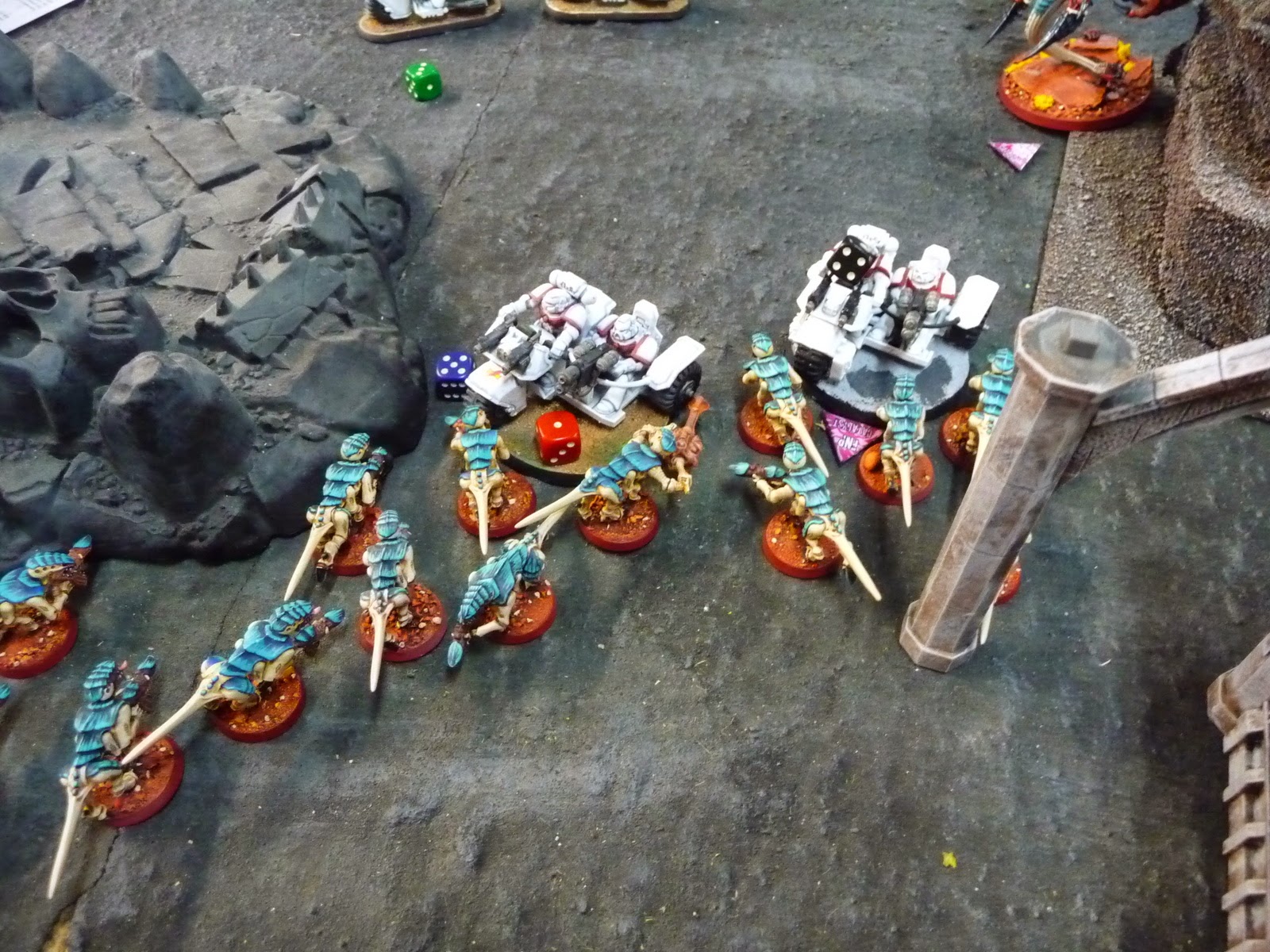 I do a couple of wounds but suffer a few dead and remain locked. 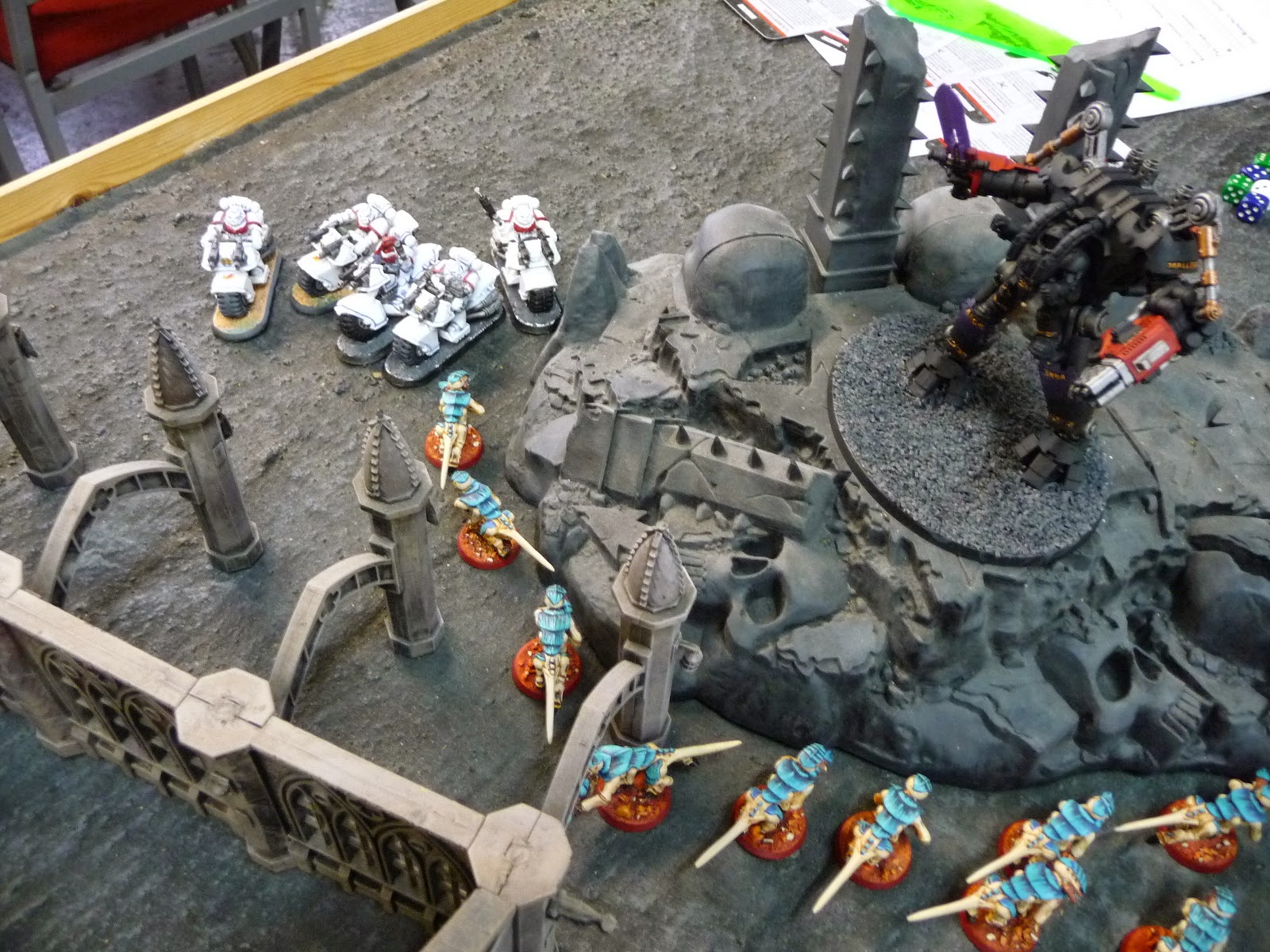 Dreadknight and stealer continue to play patty-cake, then the brood of three Hit & Run towards the locked Terminators leaving space for the Tervigon to move in next turn. 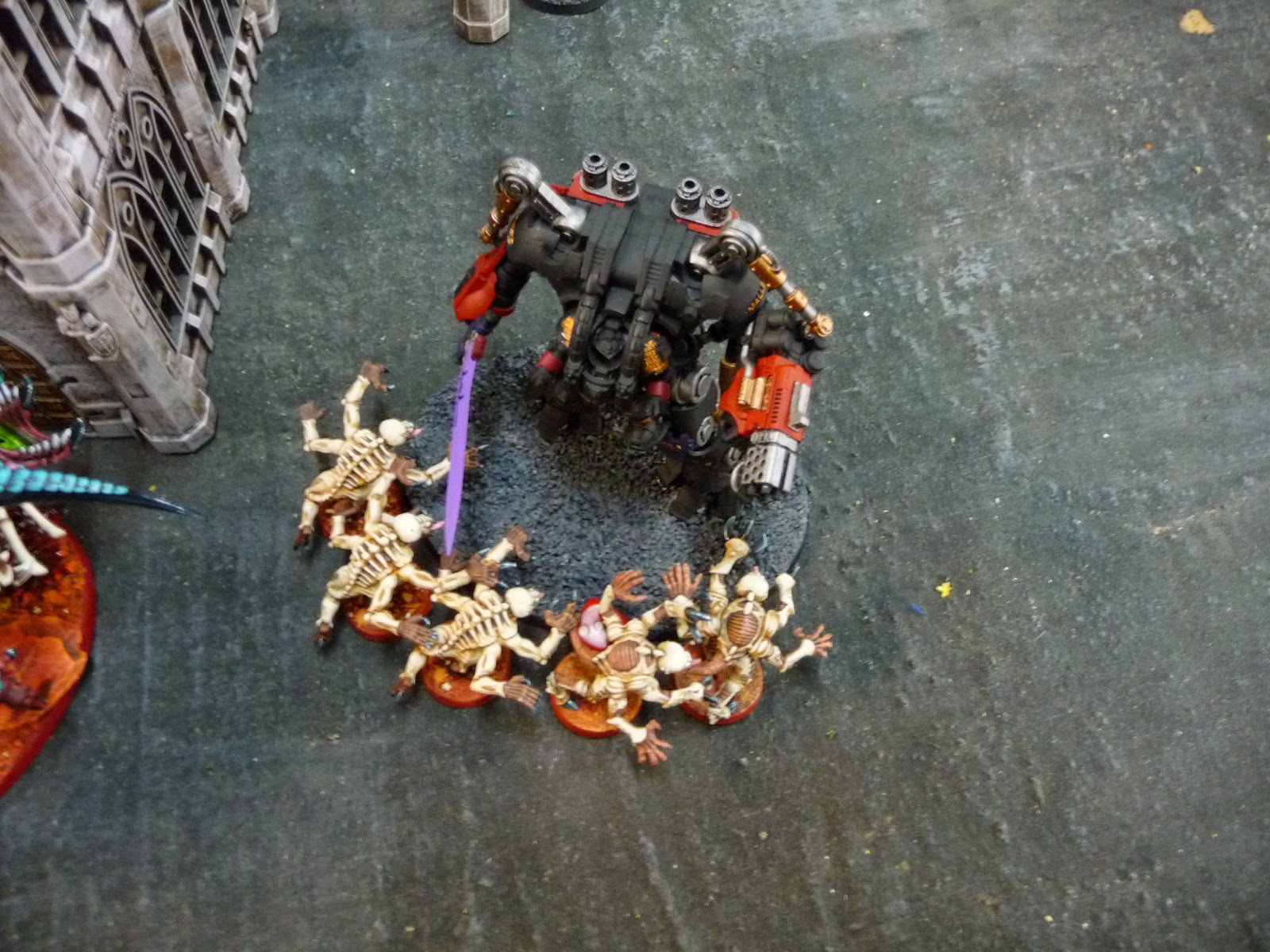 Deathleaper eventually joins this assault, challenges, Draigo accepts takes all six S6 rending attacks on his armour and then smears Deathleaper across the Cathedral walls [ultimate assassin creature my a$$] 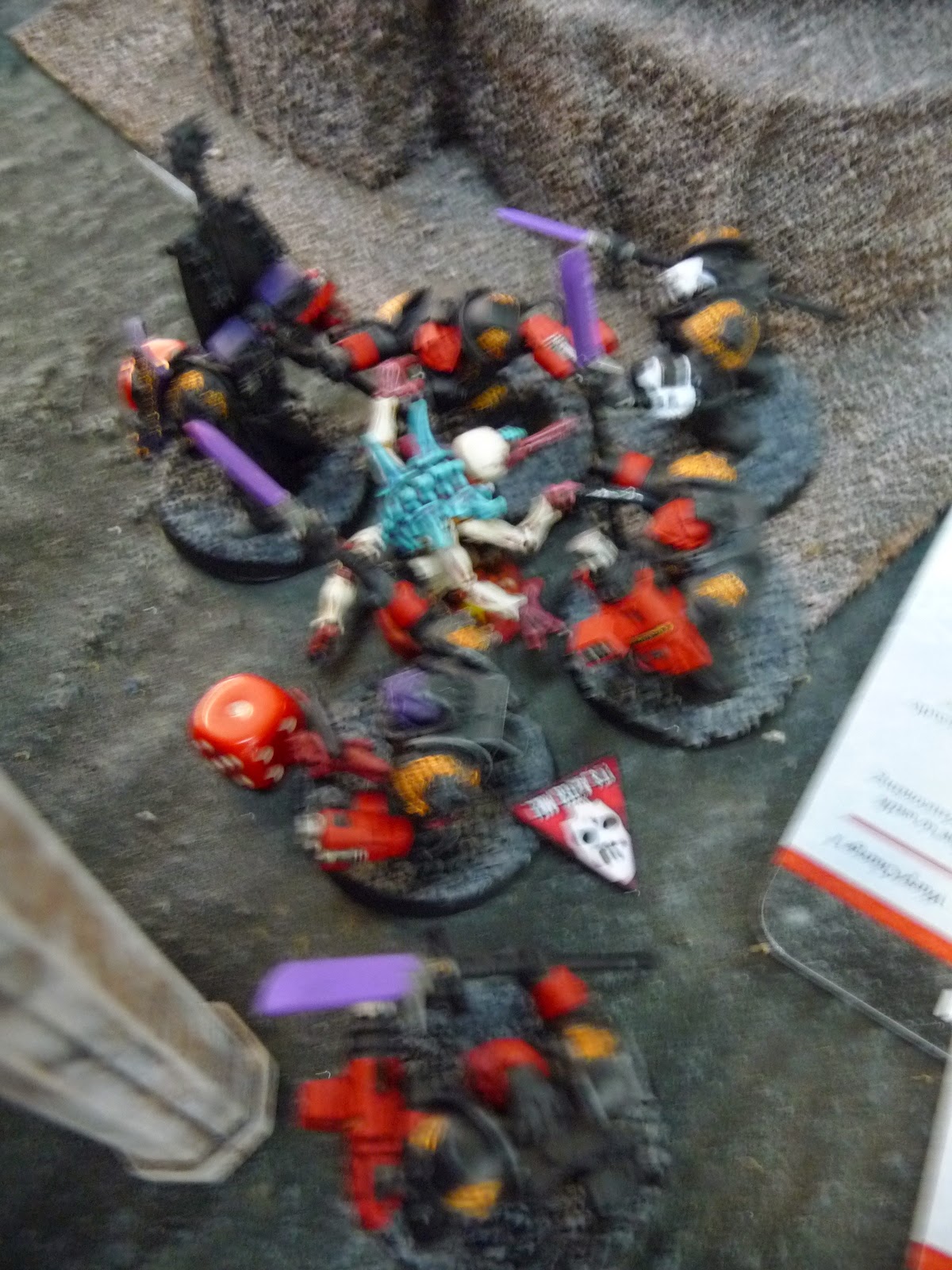 The last Stealer is chopped to pieces too and the unit consolidates. 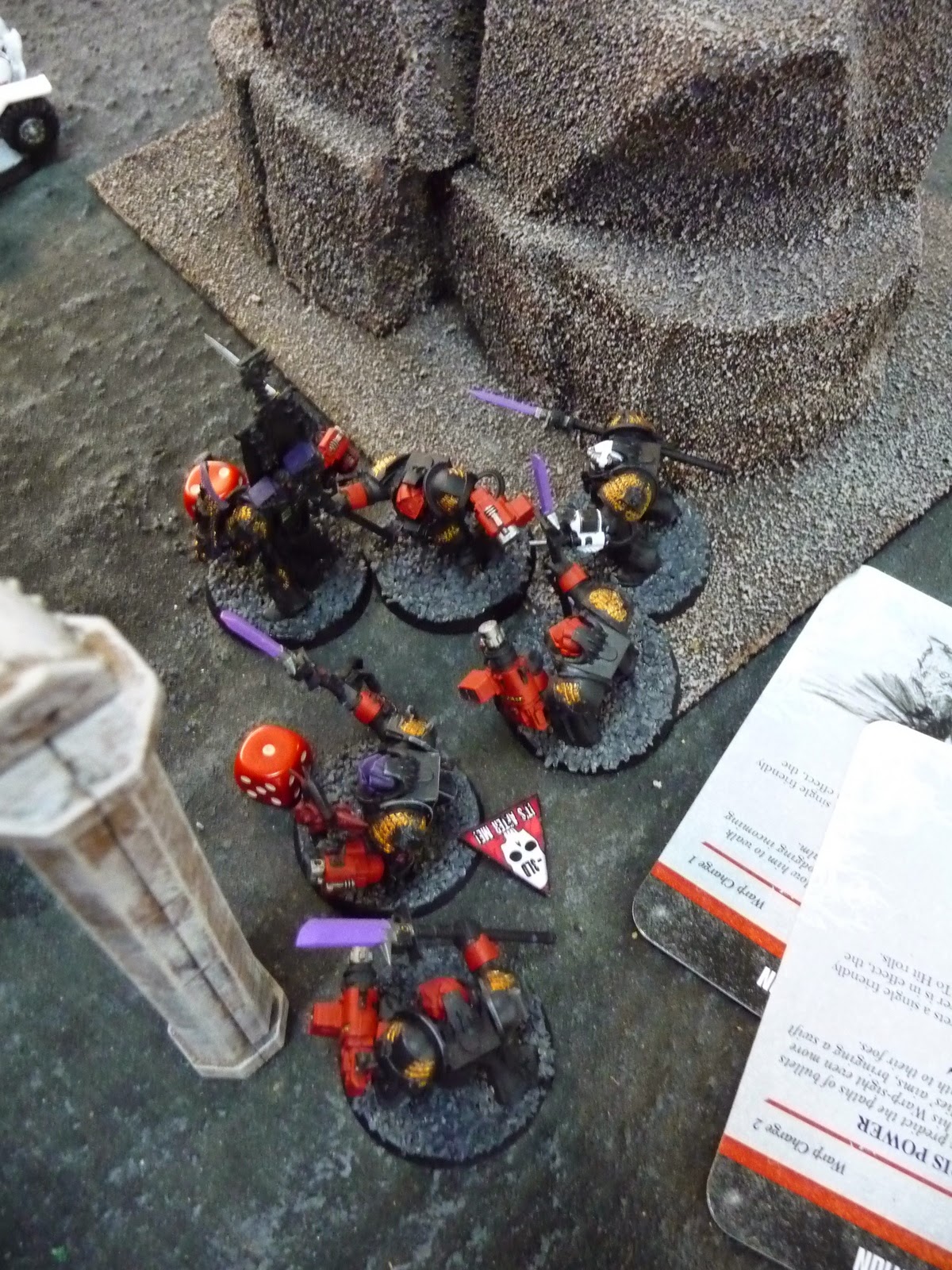 Th Stealer Brood from my objective charge the Paladins, losing 2 Stealers to 1 Paladin :( 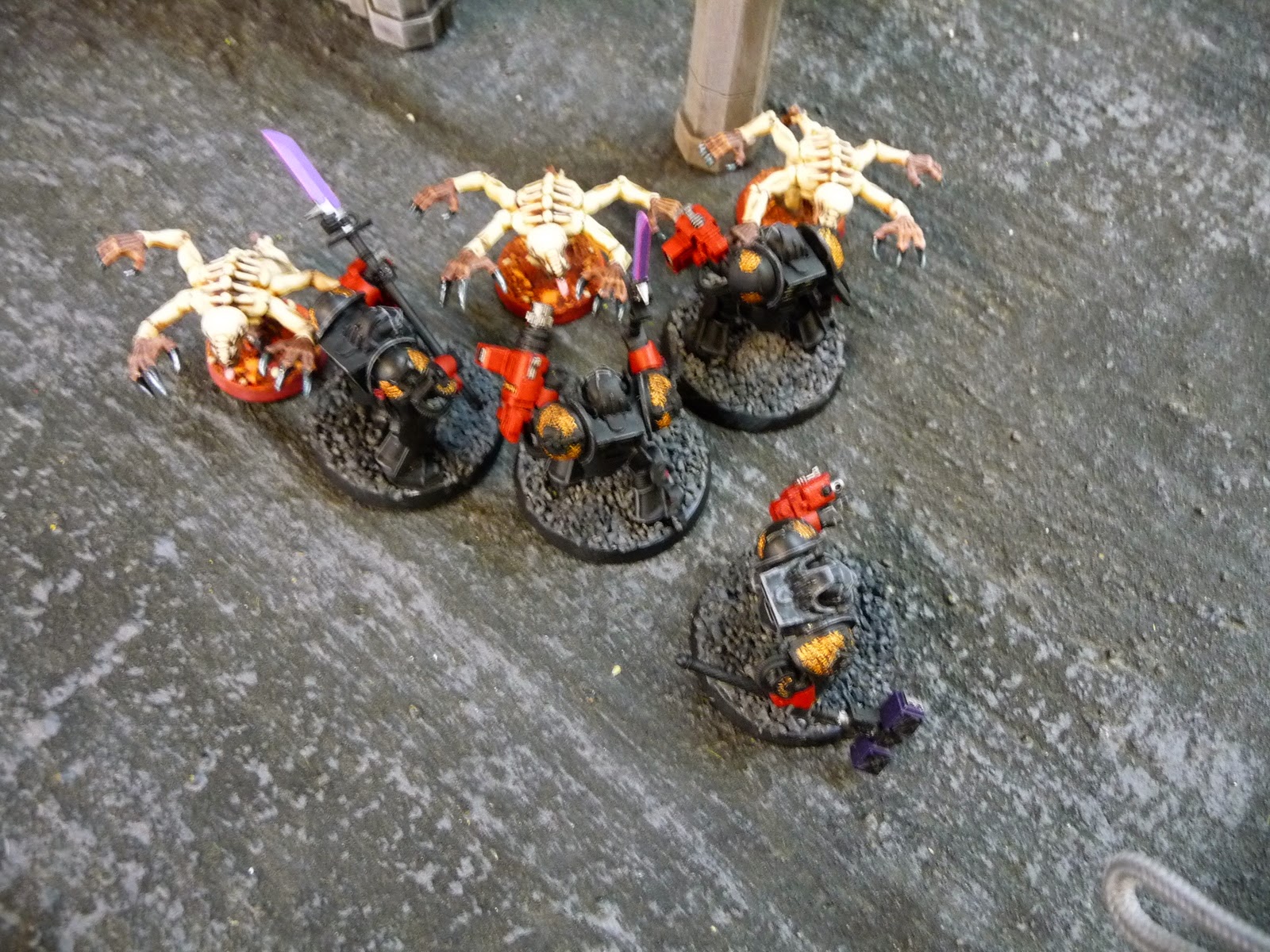 Hive Guard join the 2 remaining stealers who are splatted, but the added bulk of the Hive Guard prevails 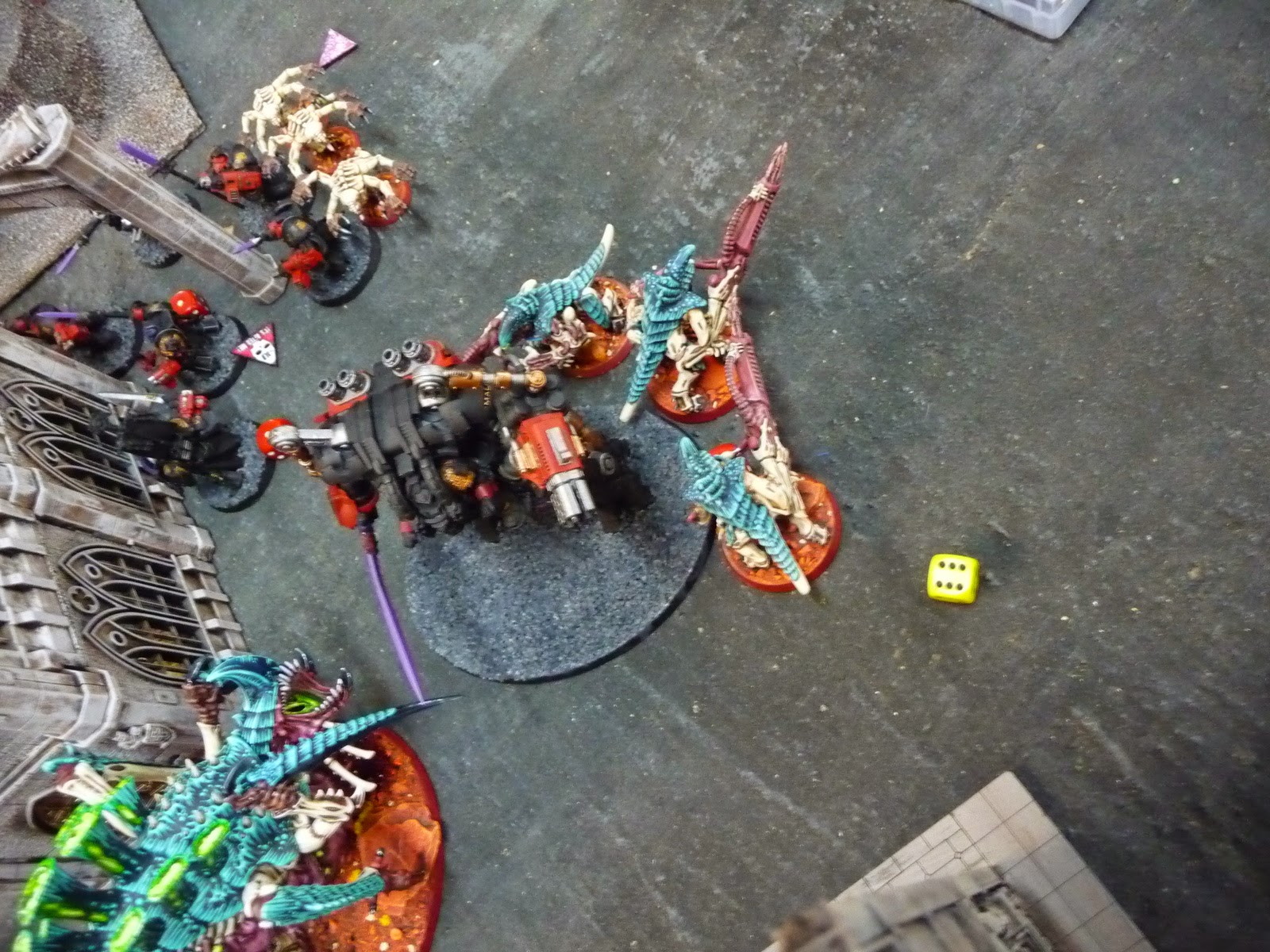 And the Dreadknight finally falls while the other brood attacks Draigo's unit who are more than happy to take them on thanks to their psychic powers and Apothecary. 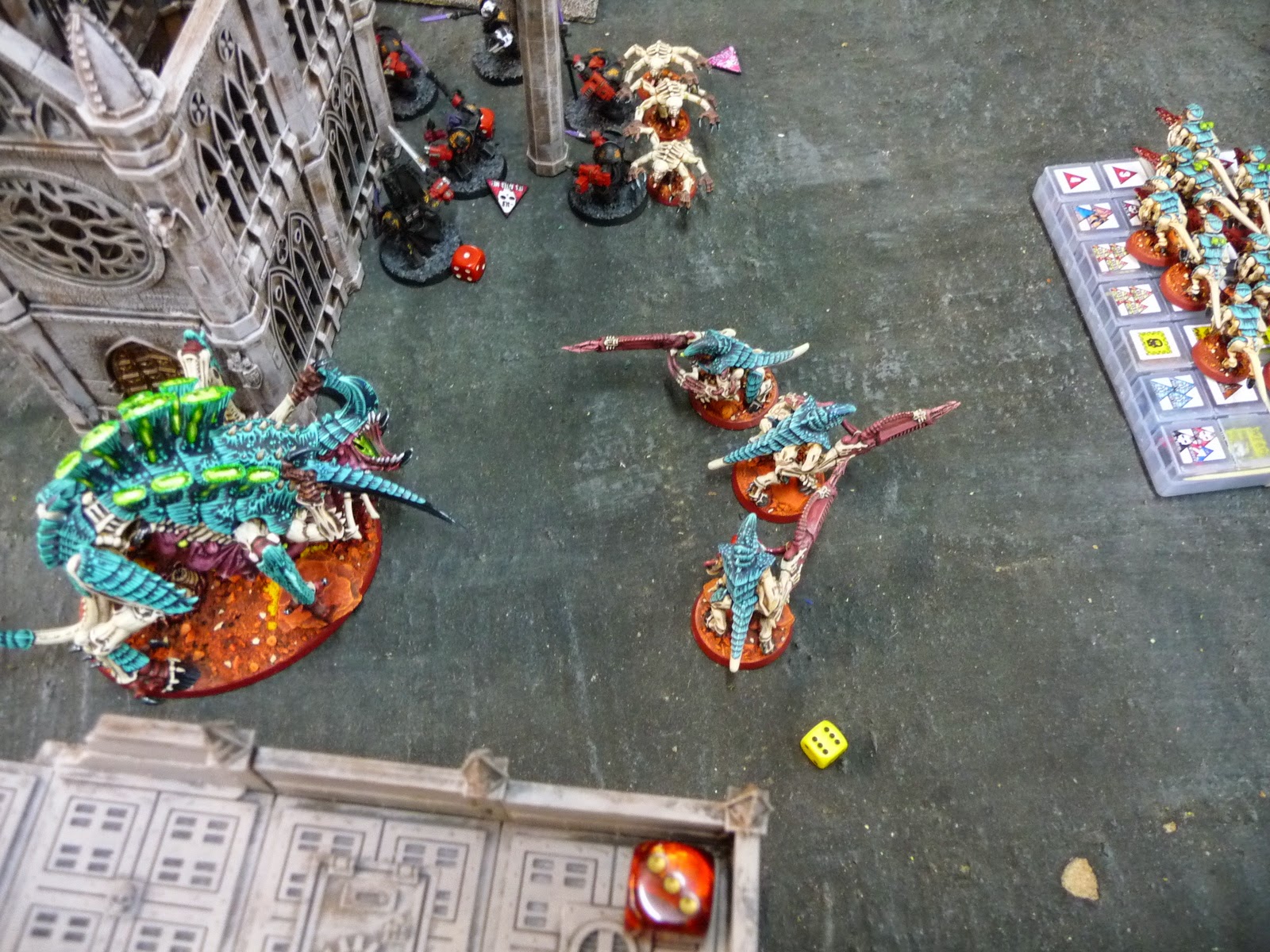 I'd debated long and hard where to send this Tervigon, with time running out we didn't have enough turns from to reach Sam's objective with spawning gaunts so I sent the tervigon to shore up my own objective and spawn more gaunts round it and landed the Flyrant to capture Sam's but although he survived some Multimelta fire, lost full control of the objective by the contesting bikes. Draigo [as a uber-scoring unit in BW8] contested the centre objective so my objective was where the final showdown would take place. The Dreadknight wisely disregarded the Tervigon and managed to roast all but two Termagants holding my objective. The Dreadknight charges and out of it's 5 monstrous attacks manages to kill just one of the valiant defenders. Unbelievably I've won 7:2 ... except I haven't yet, we forgot Hammer of Wrath so Sam rolls and unsurprisingly wounds. If I make my Armour Save I've won... that would a 6 I need then... doh! 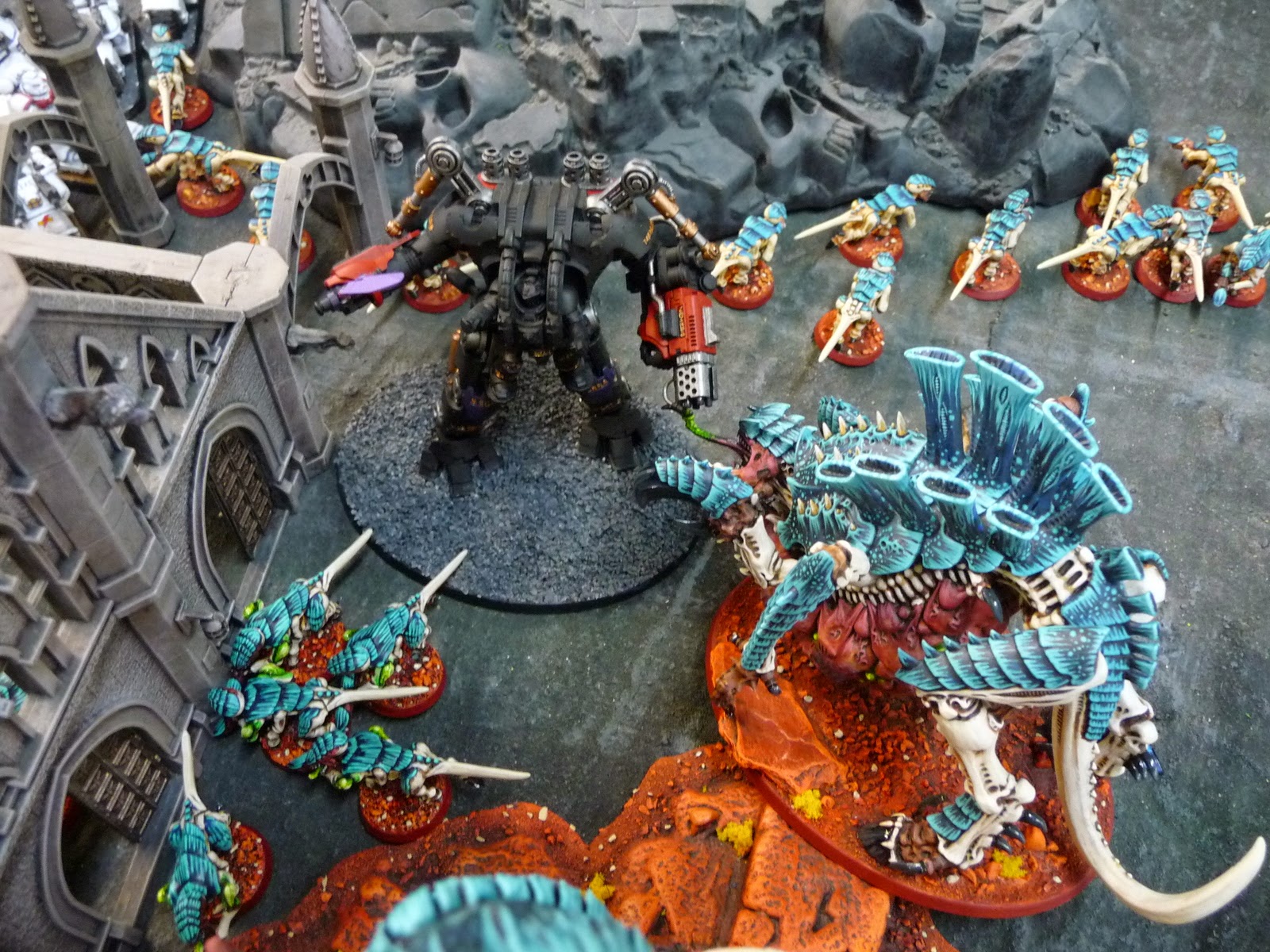 So the final score was 17:2, 15 + Slay the Warlord and Linebreaker for Sam and First Blood and Linebreaker for me. This was a great game, Sam was very Tactical throughout, which given the limited units he had to secure/contest/defend three objectives he did amazingly. I was utterly let down by the psychic phase and Deathleaper in particular. Seriosusly, Deathleaper only had to take one wound off Draigo with six attempts and couldn't do it, pathetic! Once again the Stealers were the most pivotal units. even if they did very little it was them holding units at bay or being the first turn targets in Sam's DZ which meant he wasn't advancing and picking on my bigger more valuable scoring 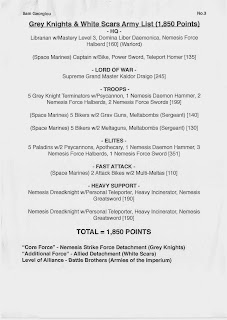