Gareth Newton Williams was my last game with his Tau on a Skyshield. By this stage I'm relegated to one of the lower tables, with PeteB on the next to bottom and Liam on the last with Blog Wars very own founder Alex. We all started to have a great laugh with PeteB opposite another PeteB and his Necrons who proudly exclaimed he didn't run the usual suspects, no Annihilation Barges, Flyers or all the other usual cheesy nonsense, y'know the stuff my mate Ben takes. But with perfect comedic timing Gareth interjected with the line 'and that would explain you playing on the bottom tables'! We just fell about laughing and that set the tone for the game. Even with a highly time-sensitive mission where every palyer turn after game turn 1 allows you to score points Gareth and I chatted amd discussed things like my not taking the Skyshield, which would have been fun opposite his


The low down:
The last thing I needed was to lose the initiative and night fighting. With my Hive Tyrant on top of the Bastion and Venomthrope outside he was just in cover range but some of my other units were outside, which if he'd been in the Bastion they'd be safer. 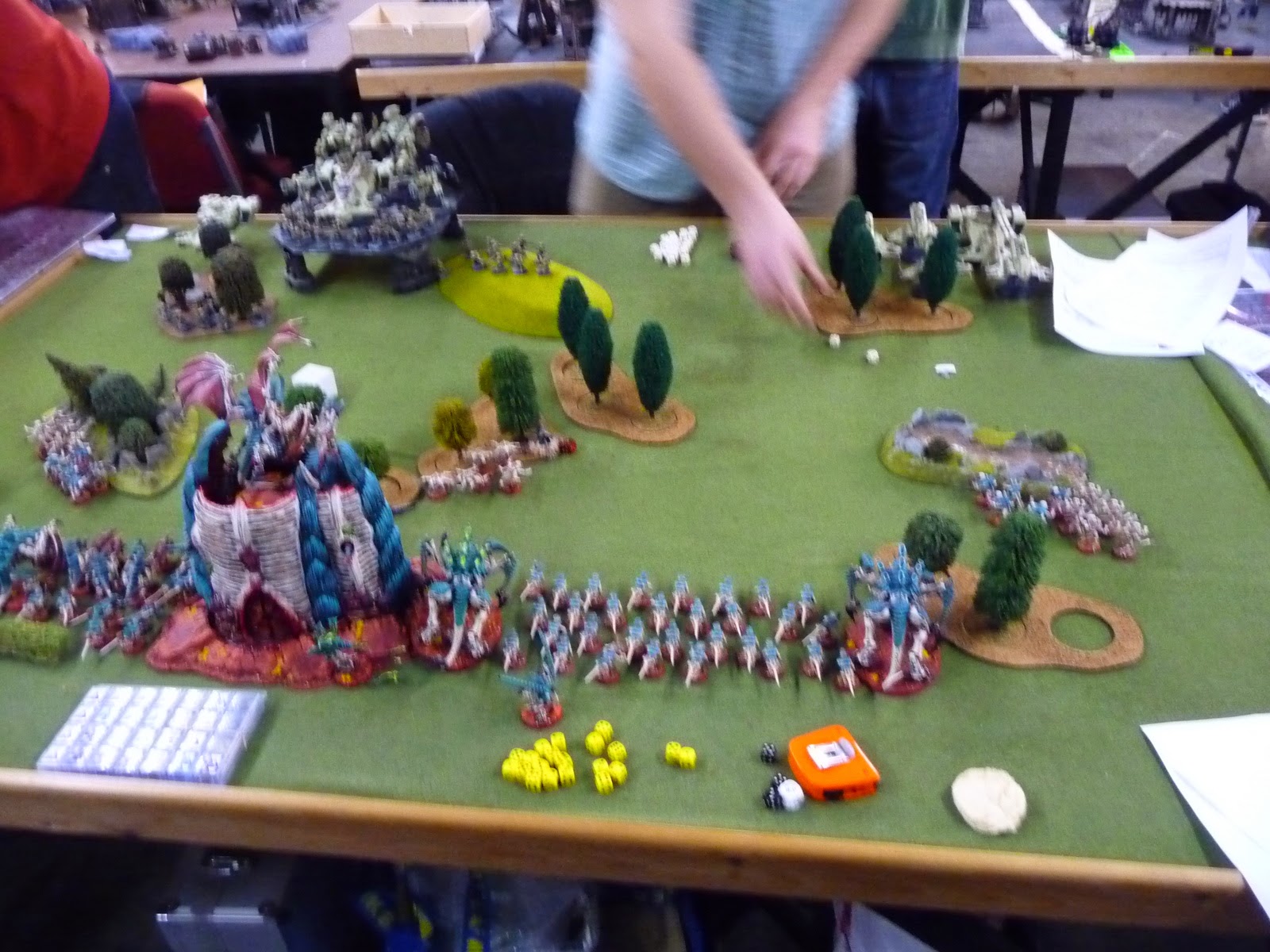 As it was all these guys on the Skyshield, together with the Markerlights from the Pathfinders in the woods dropped a couple of wounds on the Flyrant, who at least couldn't be grounded. 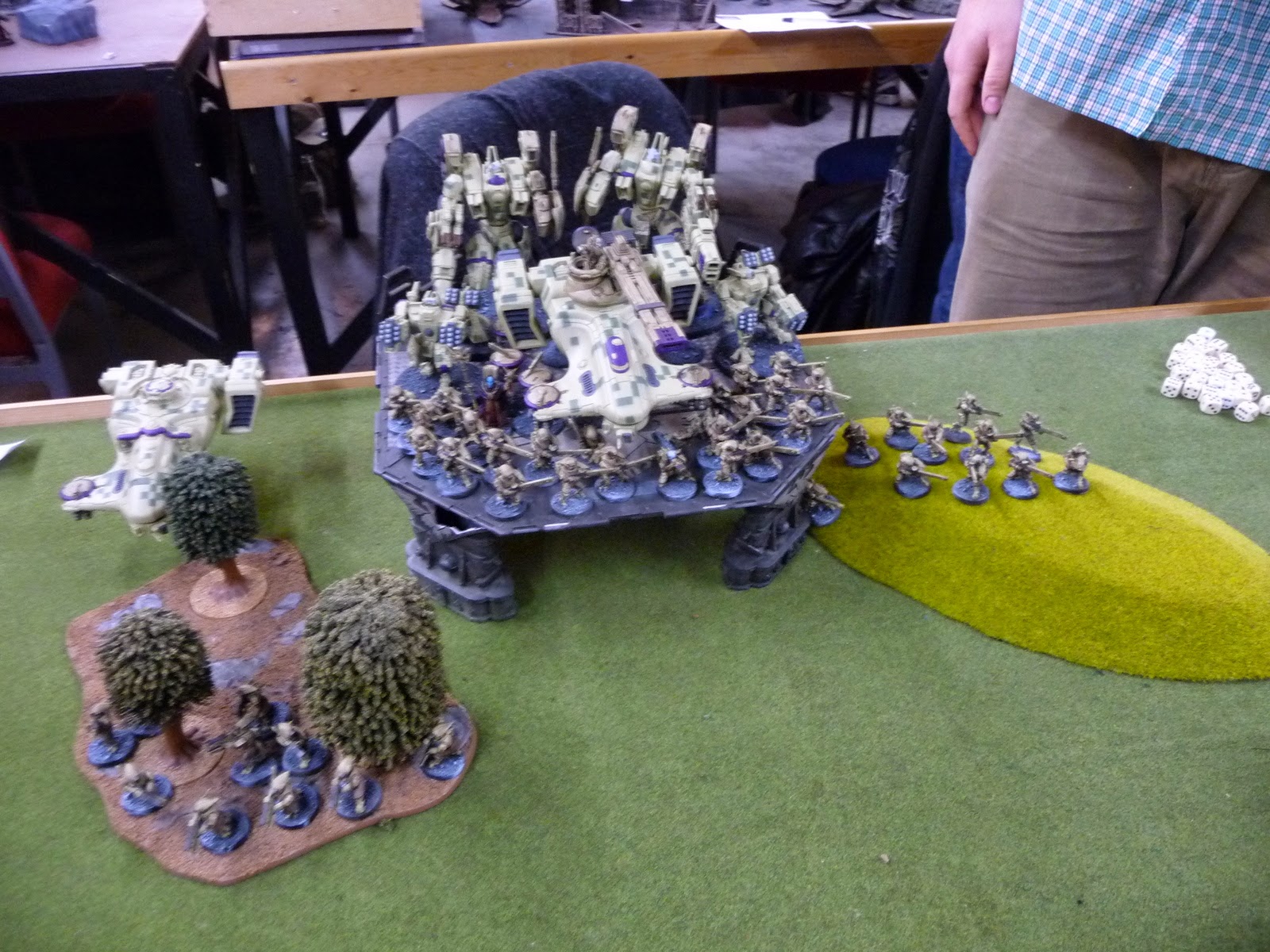 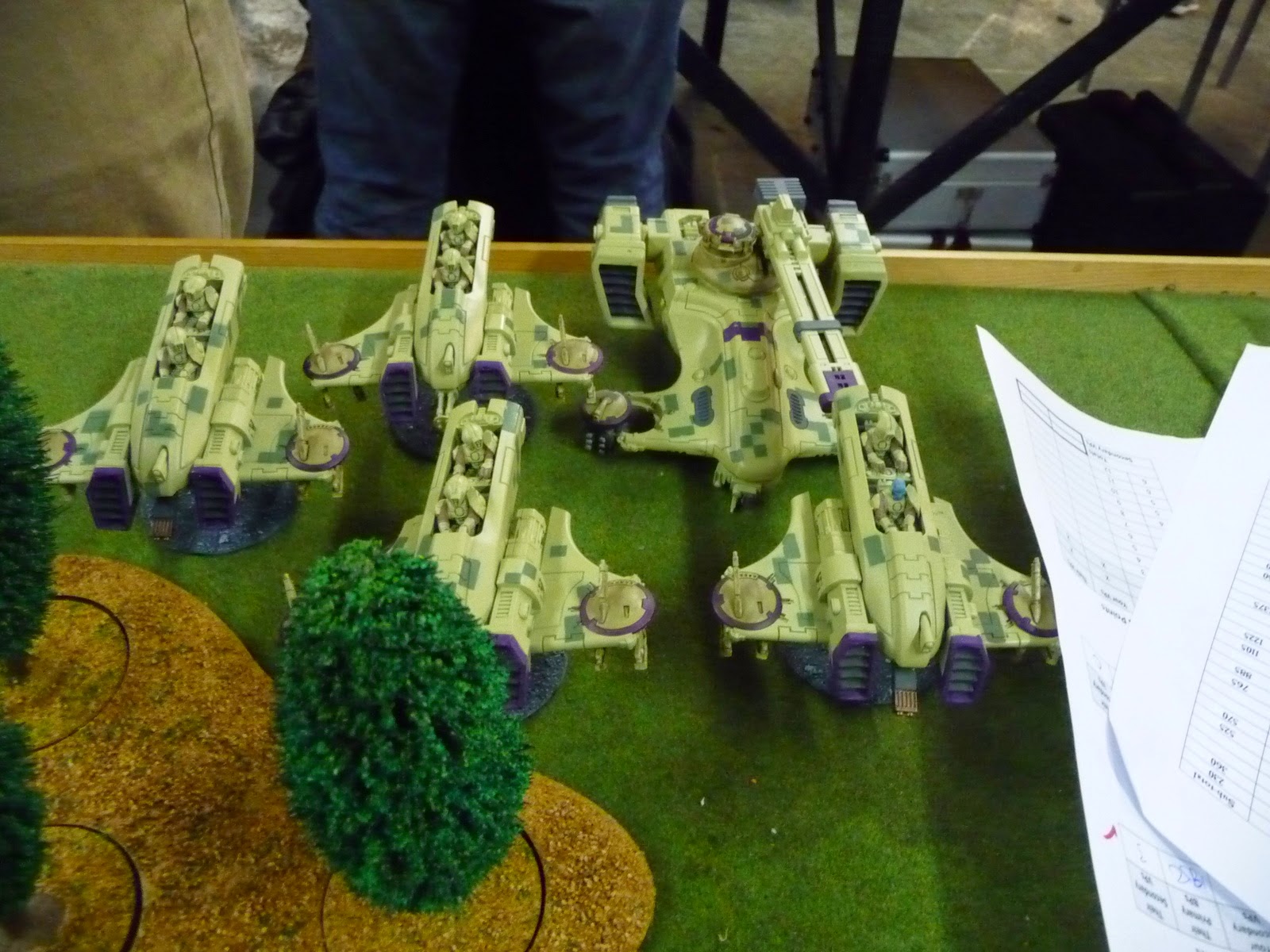 Further fire from the Skyshield took out two Hive Guard and put a wound on the Carnifex. Even a couple of Stealers got killed despite their excellent cover. It's all for nught when the Tau can ignore it with their Smart Missiles - like Impaler Cannons but fired by creatures with a Ballistic Skill and can see more than 24" [no I'm not bitter! they're probably half the points n'all! ruddy fish 'eads] 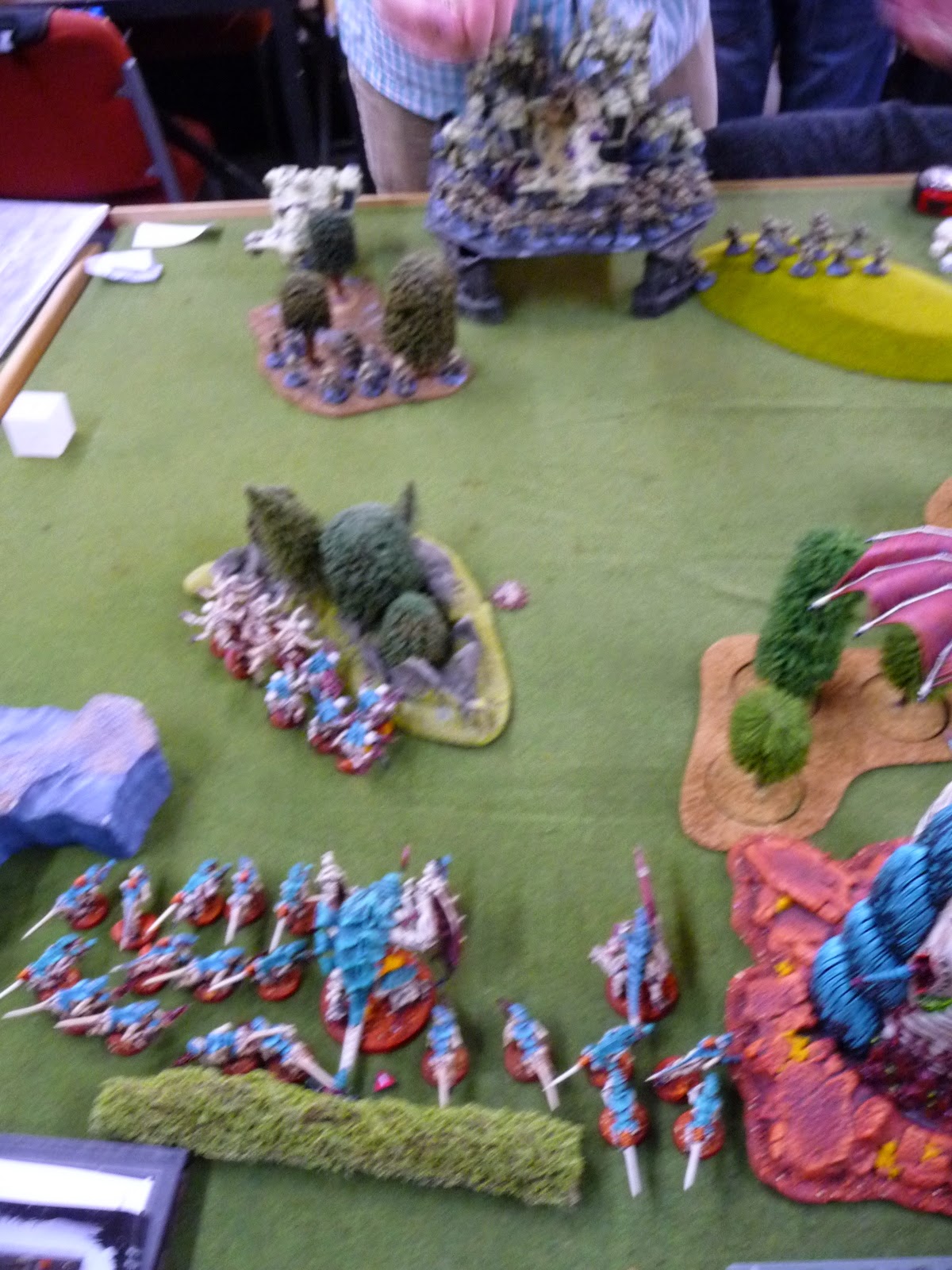 With my turn I swooped forwards hoping to end the Pathfinders, maybe causing them to rout, but to no avail. Genestealers headed to distract, they can't assault after Infiltrate anyway. 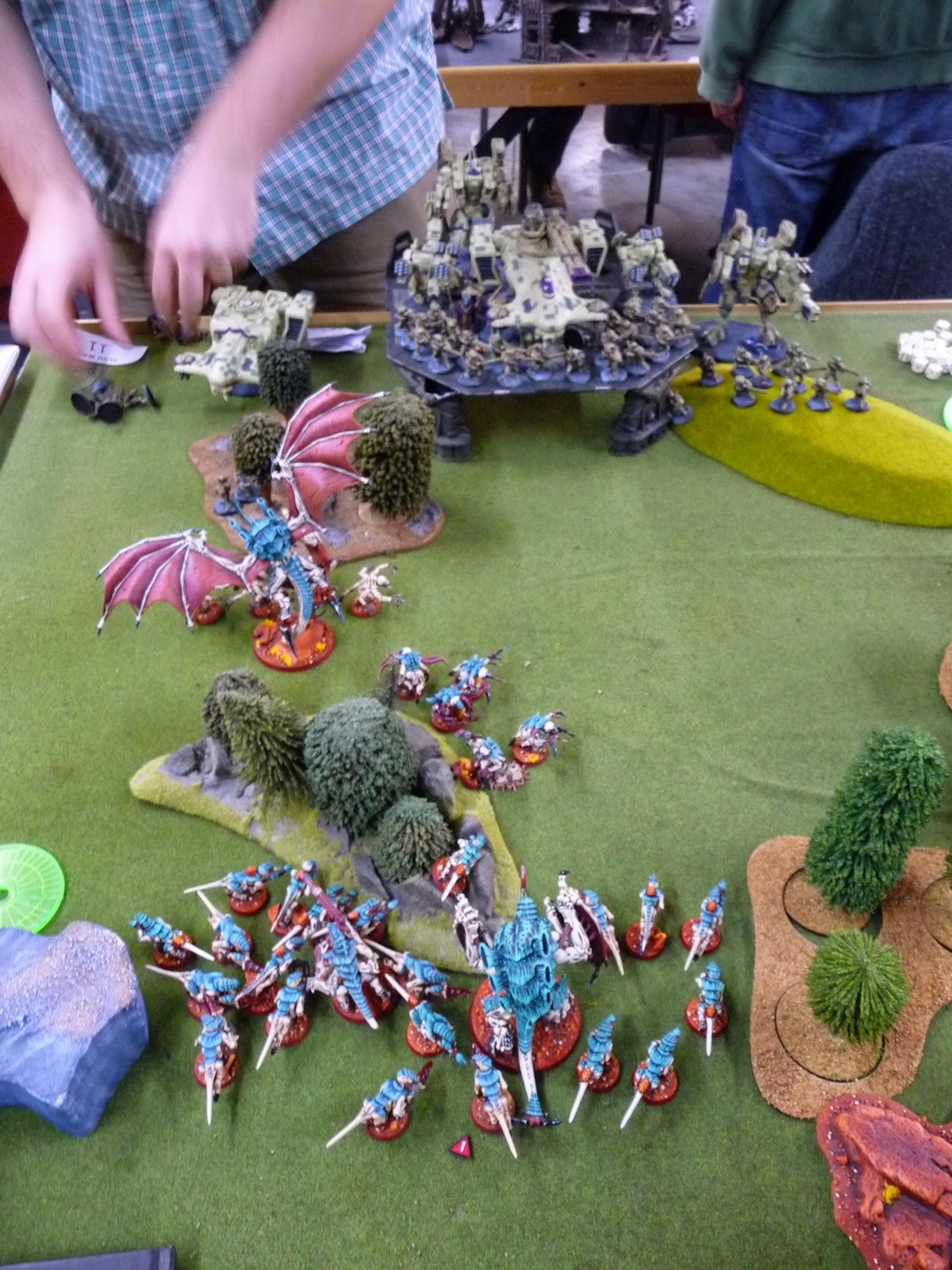 Lost of gaunts spawned, double figures for both and I rushed to swamp the objectives so that I would still be holding them all at the end of Gareth's turn 2 and get me my first VPs [note Deathleaper is not on the board there he's waiting to Deep Strike] 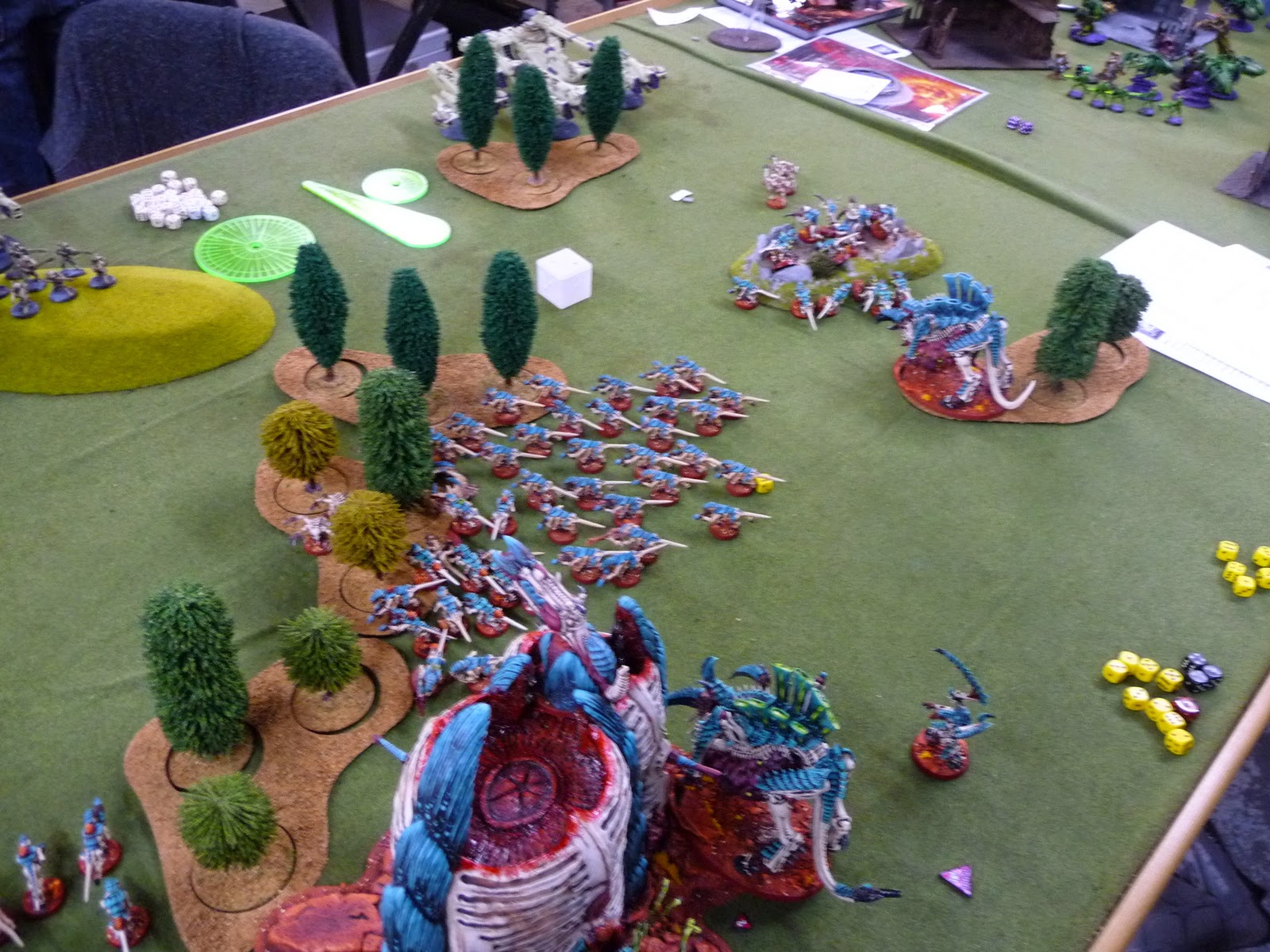 The Flyrant gets killed, it helps when you can just add Skyfire to your units. The lead brood of Stealers, First Blood is gone at least. 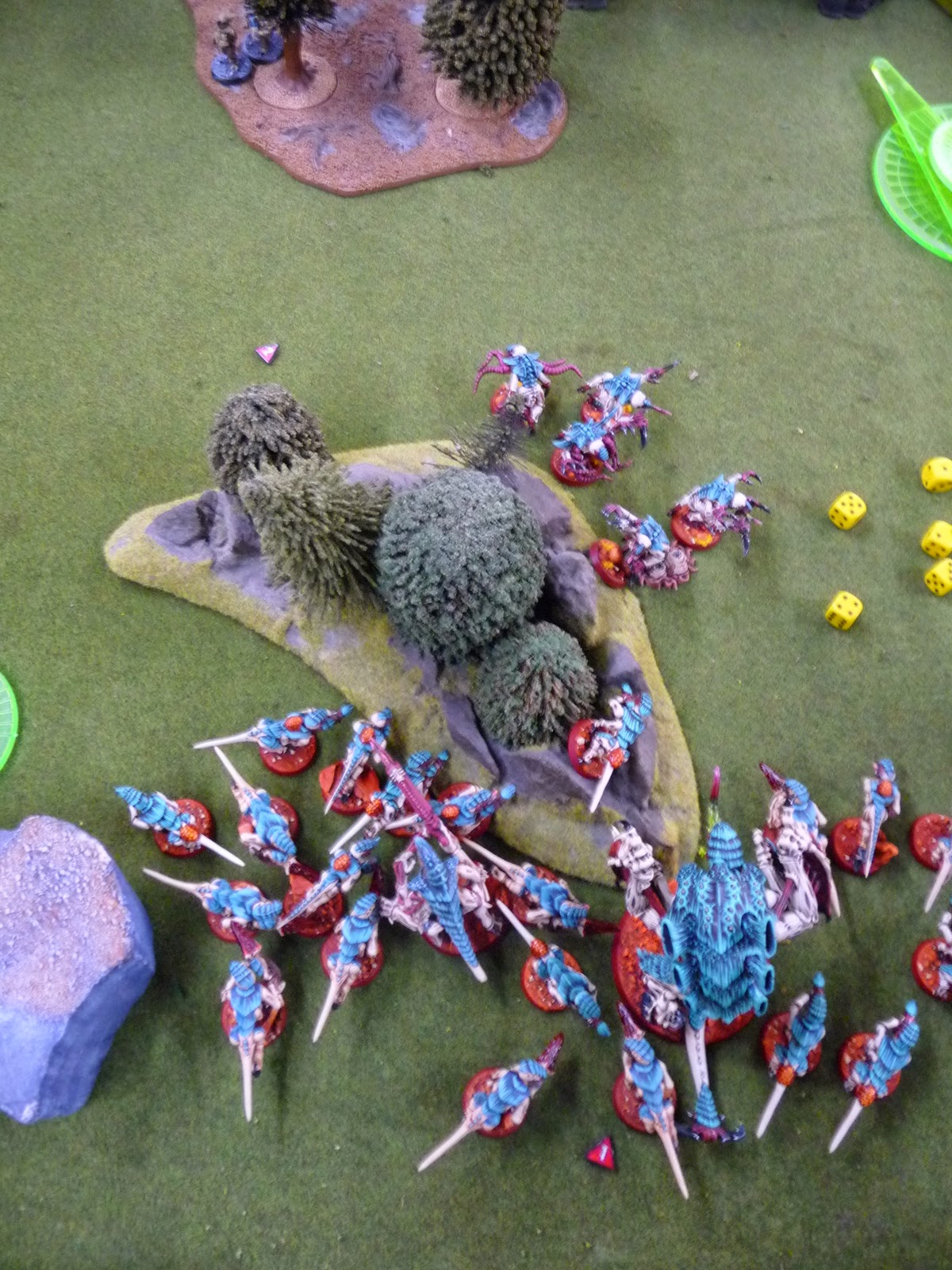 Second unit of Genestealers gets wiped out too losing the objective, perhaps if they'd just been in range of the Shrouded Bastion they may have survived. I get 2 VPs from the other two objectives. 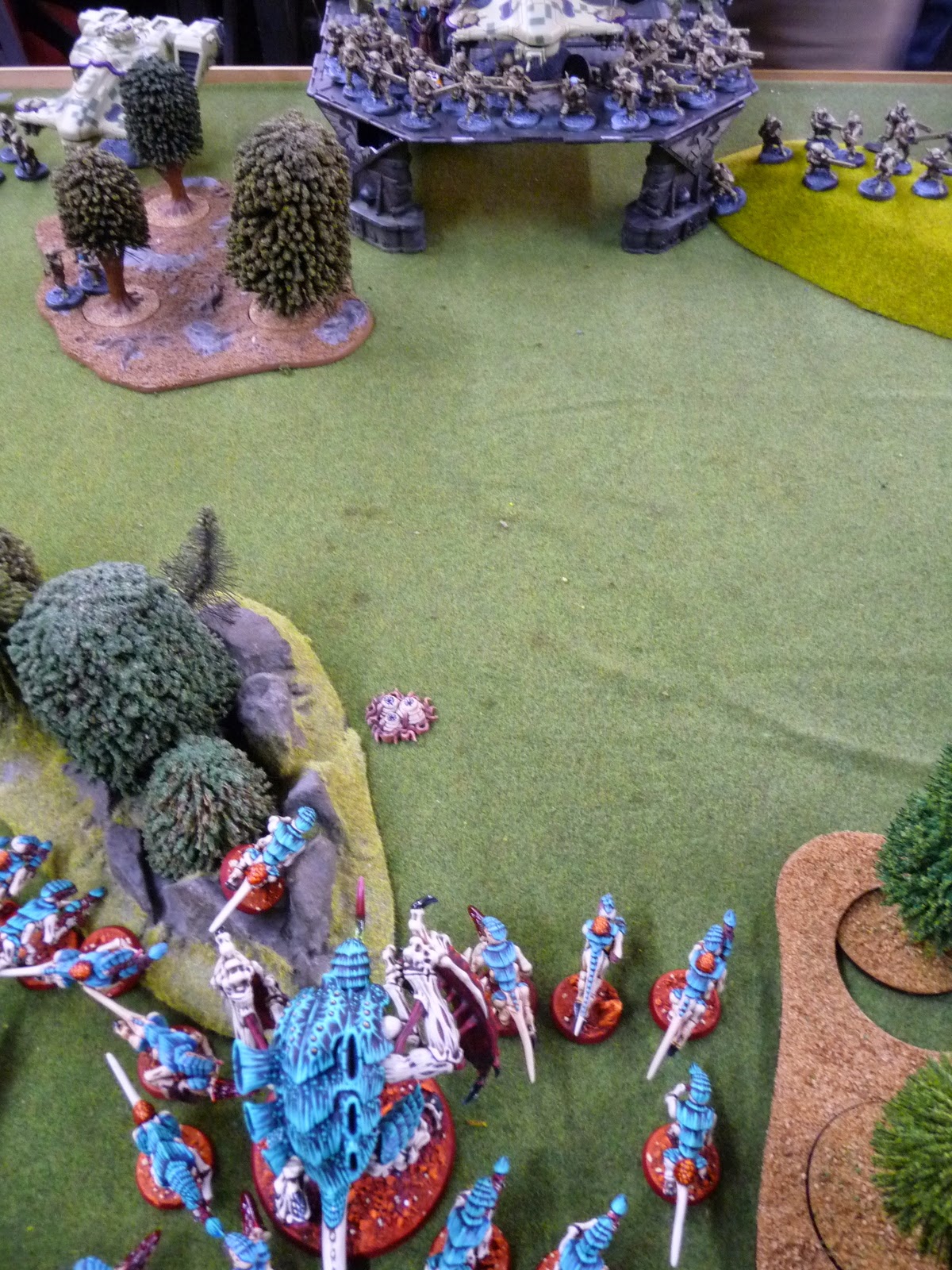 Deathleaper arrives in my turn. I manage to position him so the Riptides can't Intercept. There's no angle for the one on the Skyshield and hes'd hidden fromt he one that jumped off. It's Flesh Hooks rake the back of the Tau [whatever it is] but do nothing. I also moved the unit of Gaunts with the Carnifex up to my unsecured objective but within range of the Bastion which gets me another 3VPs [5:1] 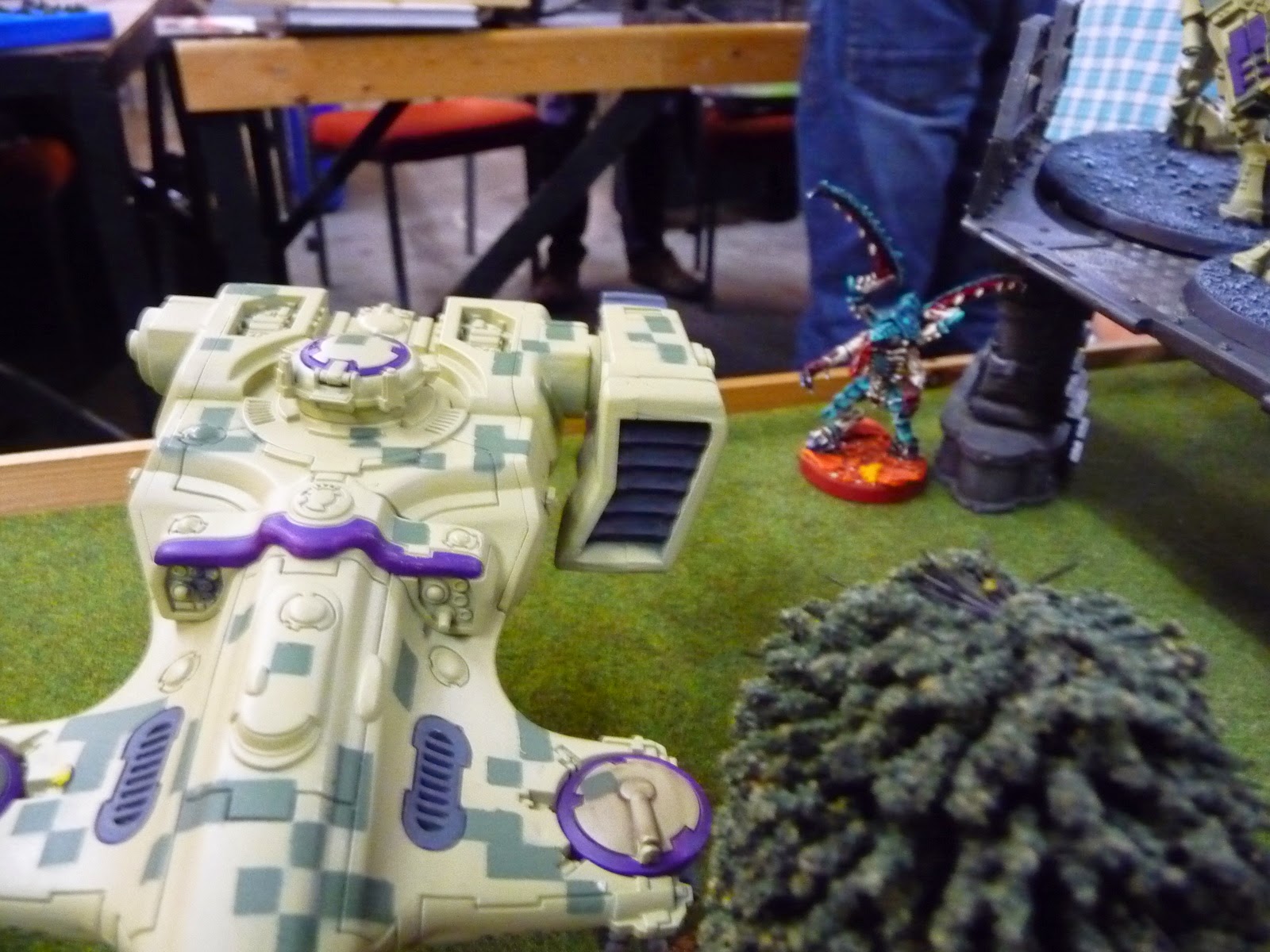 Having lost one of the Pirannahs to the charging Stealers the remaining three adopted a protective formation to hide their weaker rear armour and promptly removed the larger brood of Stealers from play. I still held all thre objectives so this takes me to 8:1 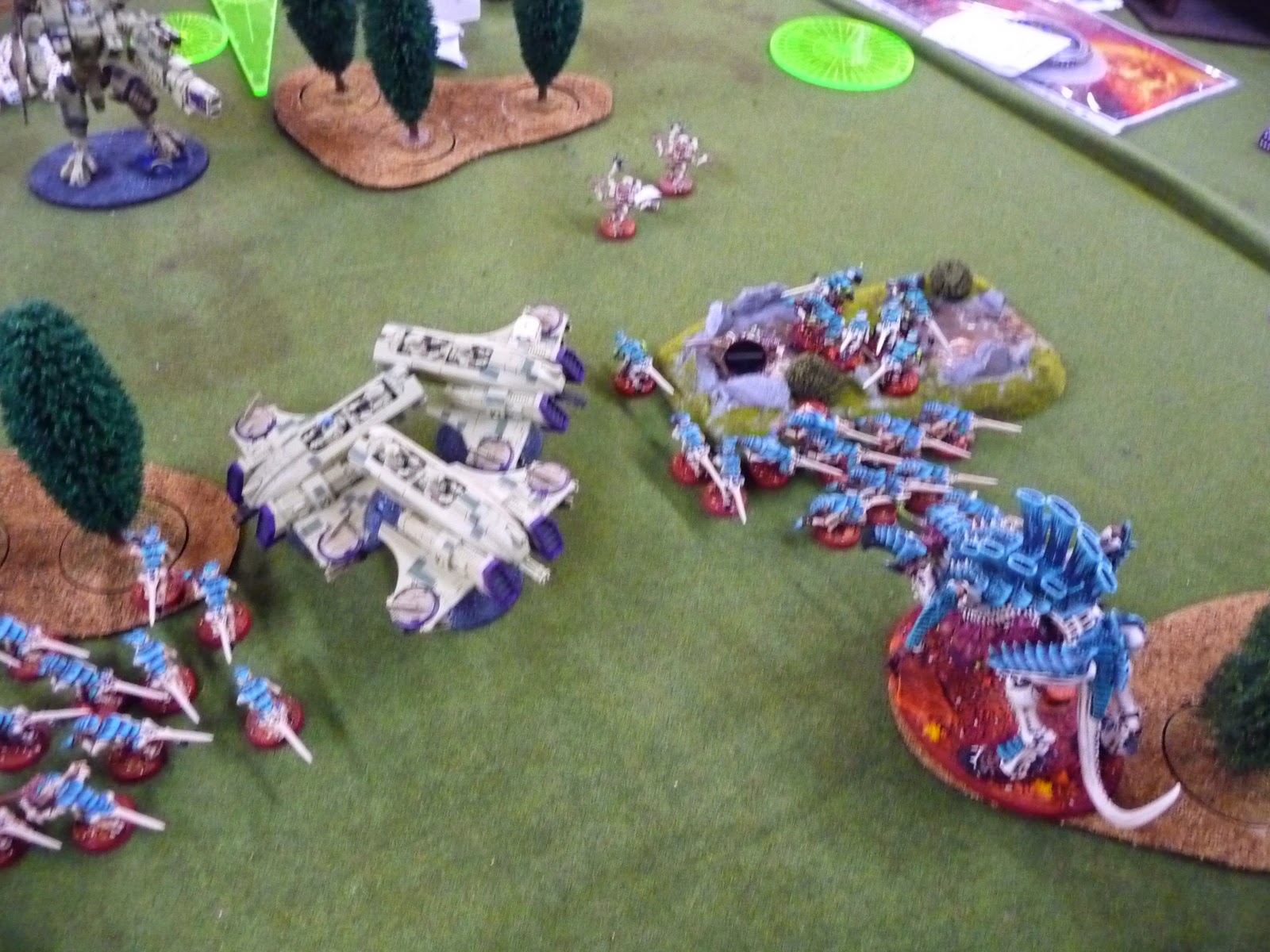 In a bold move Deathleaper clambers onto the Skyshield declaring he wants to challenge the Ethereal. Gareth is astounded by the temerity of such a challenge and agrees that if he can get passed all the overwatch he'll accept. 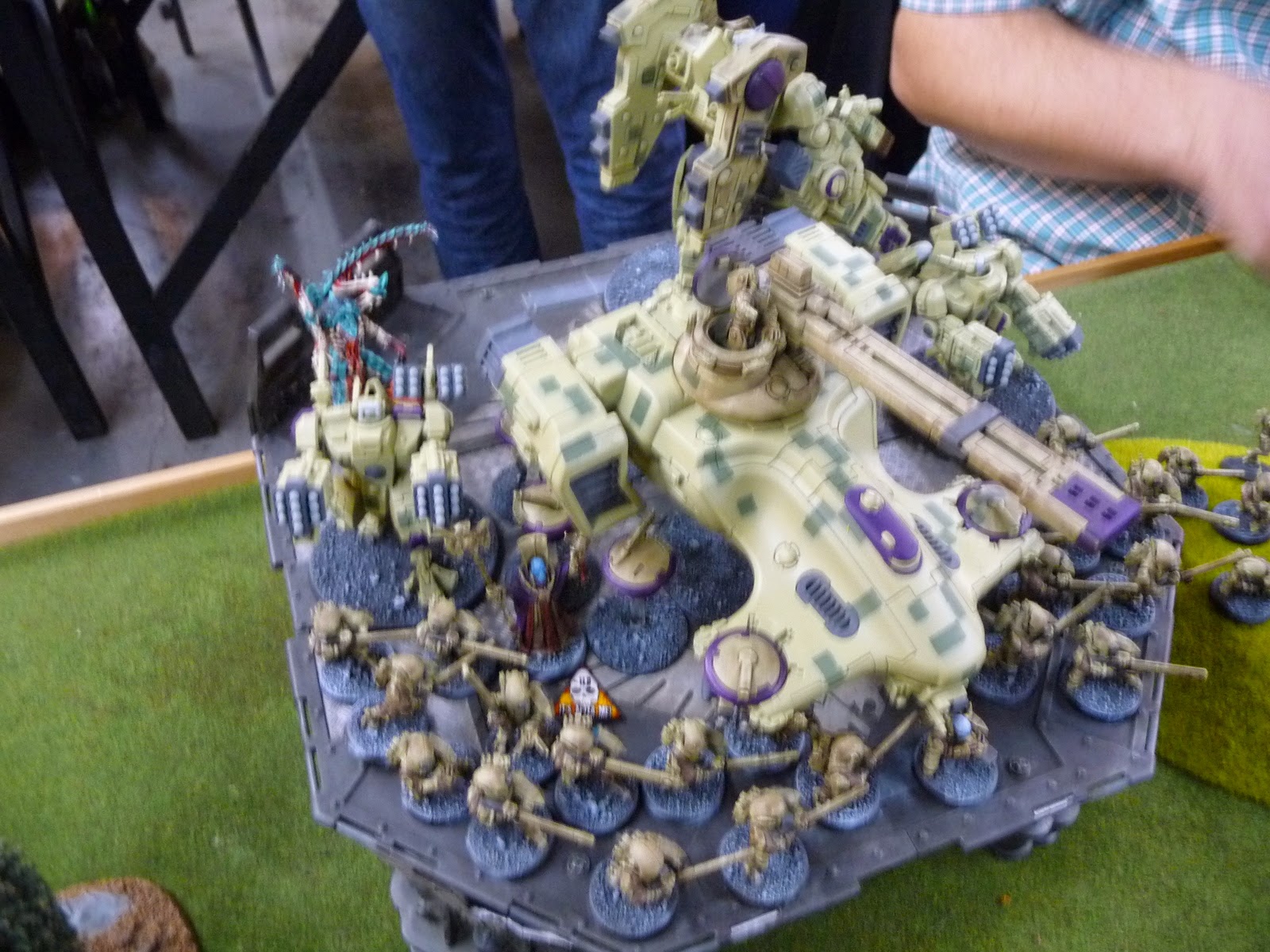 The fact is even just the supporting Overwatch from the Riptide is enough to wipe the Galaxy's ultimate assassin from the face of the planet! Bye, bye Deathleaper, you suck. I may go for Old One Eye or the Swarmlord in a Tyrannocyte next time. So Gareth gets Slay the Warlord but I collect another 3 VPs from objectives making it 11:2 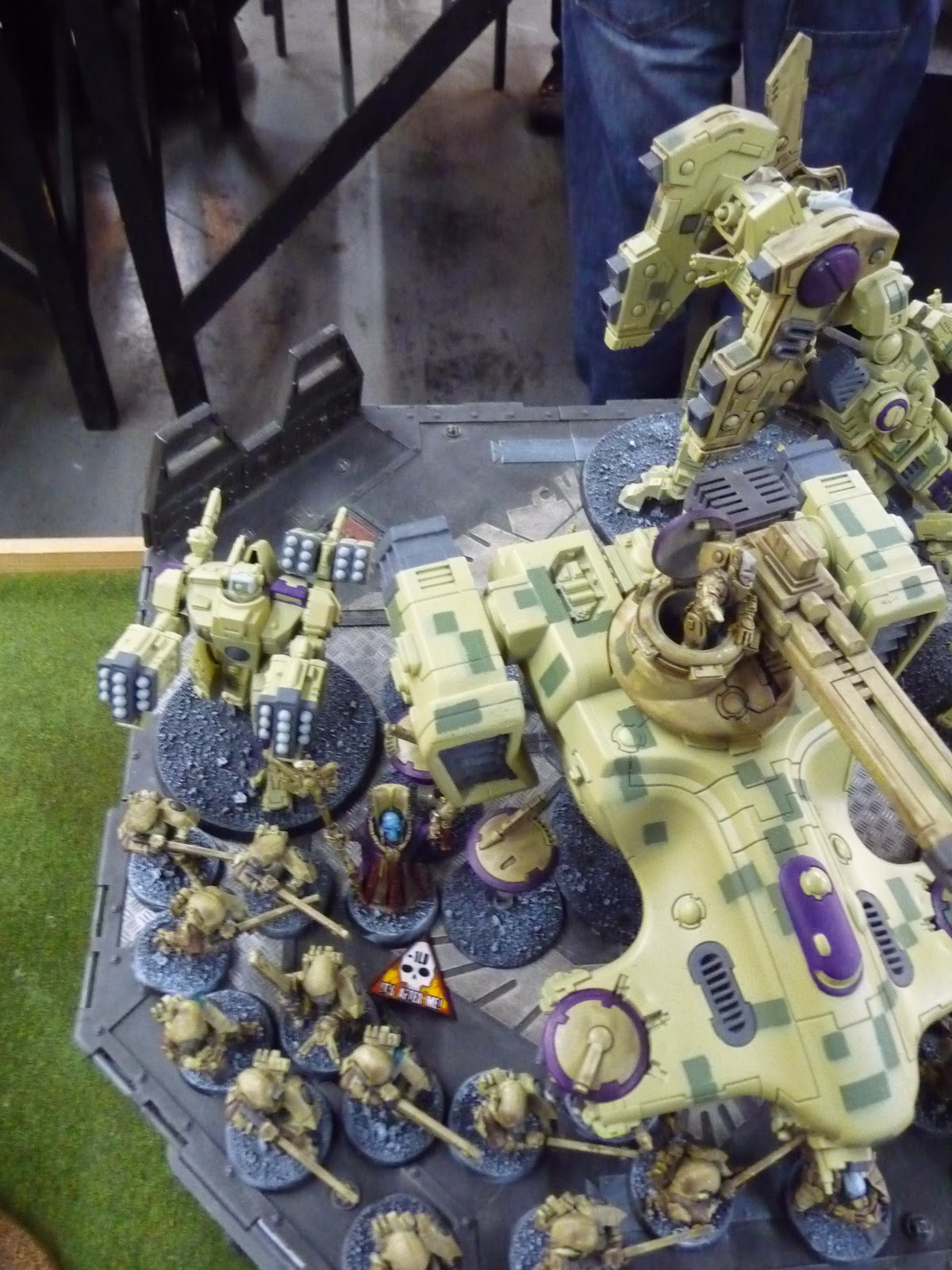 I continued to spawn double figure Termagants [for time throwing down genestealers instead of rooting around my myriad takeaway tubs], but obviously you can see there's a triple 1 in that dice roll. Well those five dice are my Tervigon's saving throws from the Pirannahs... 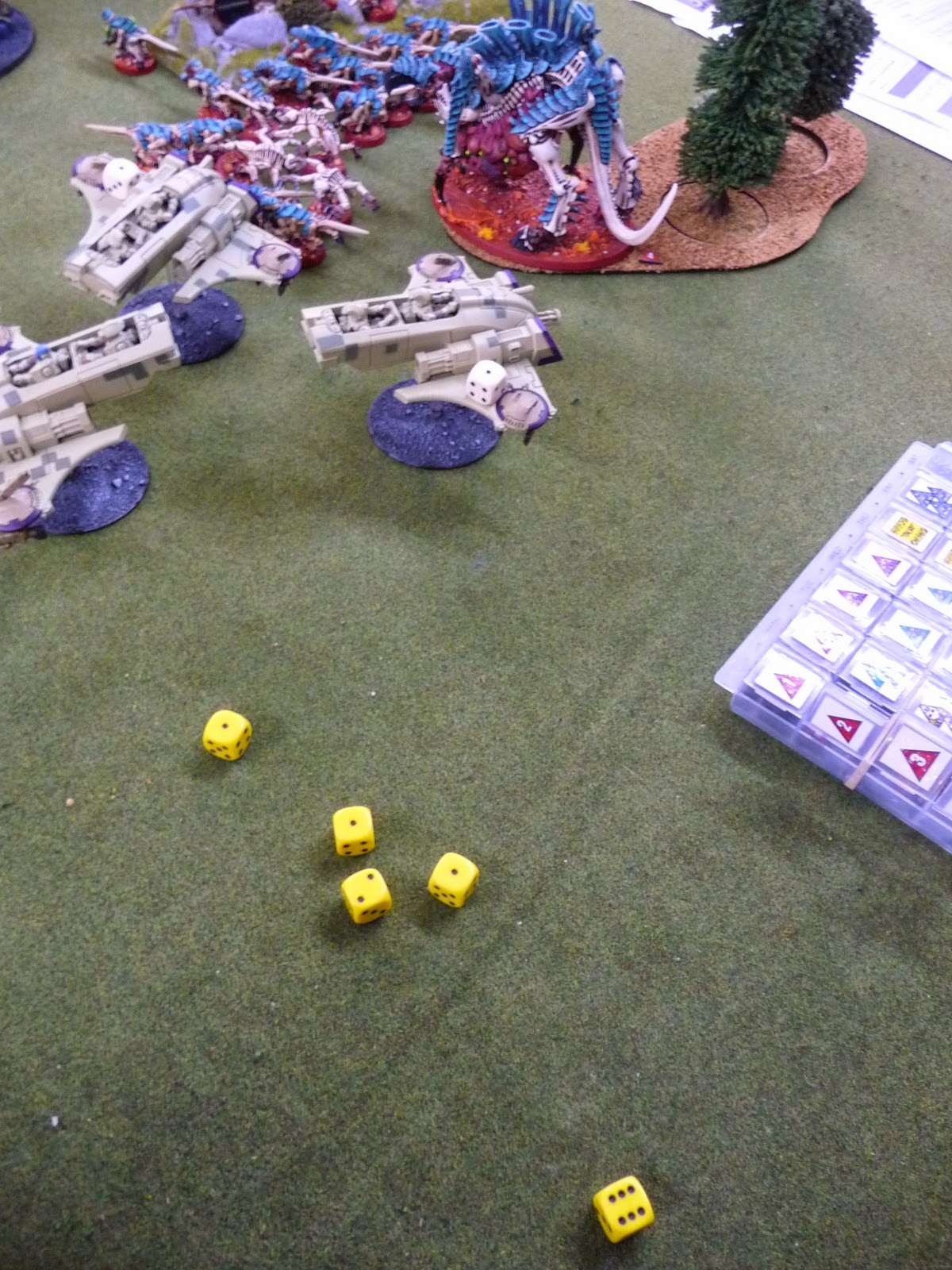 and here's what's left the termagants when their brood mother goes POP. Gareth seemed to be unaware of this unexpected bonus so with renewd vigour tried to pop the other Tervigon taking it to just 1 wound left. Despite this and some gaunts routing and some resorting to Instinctive behaviour I still hold all the objectives taking the score to 14:2. 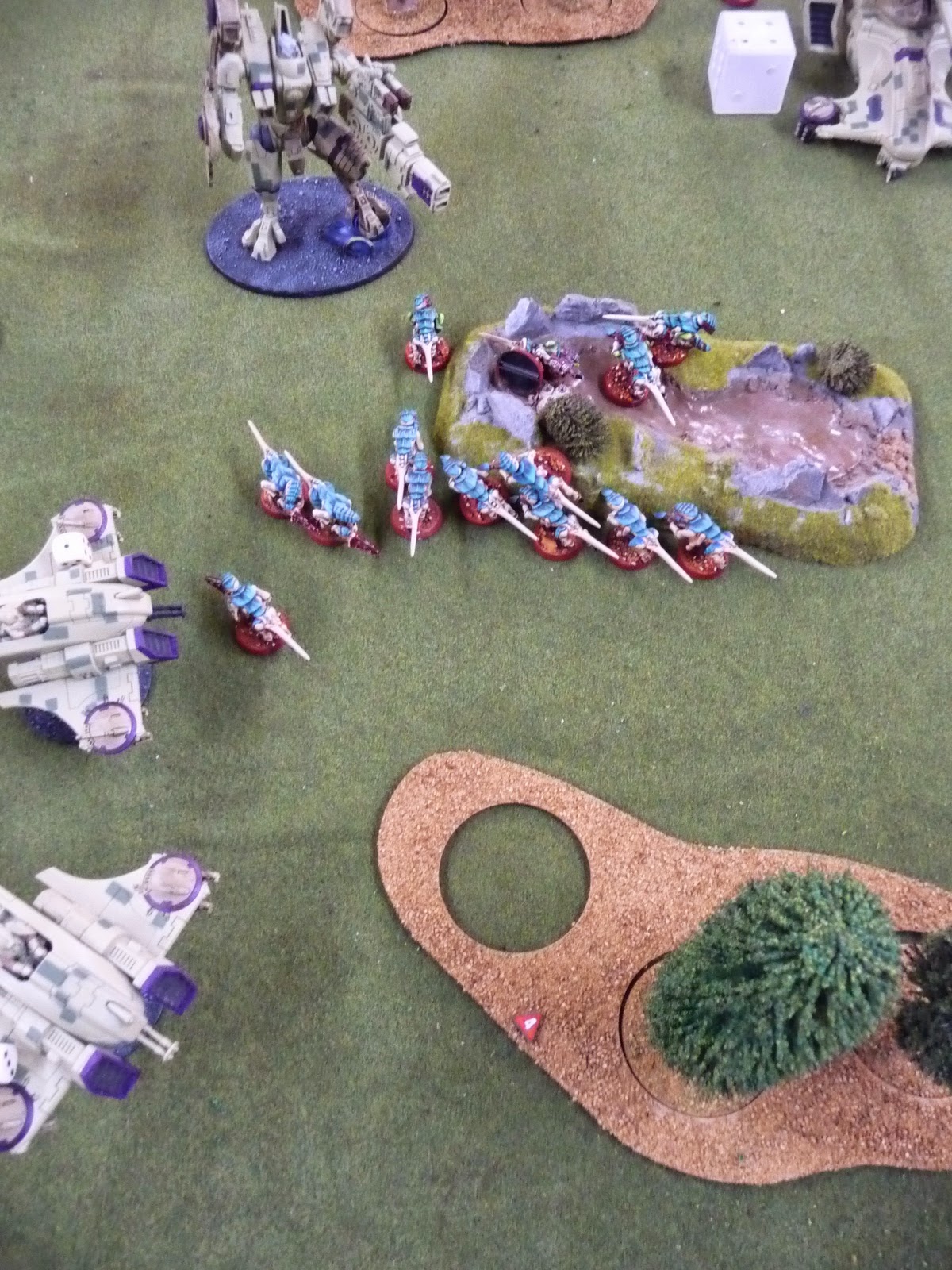 Gareth continues to pour fire into my dwindling bugs and I make numerous cover saves in the trees as the Tau enact deforestation on levels similar to those seen in the Amazon. The last Tervigon hides behind the Bastion but Longsight moves off the Skyshield and manages to target it with Smart Missiles. The Missiles swoop round the Bastion and score a wound... 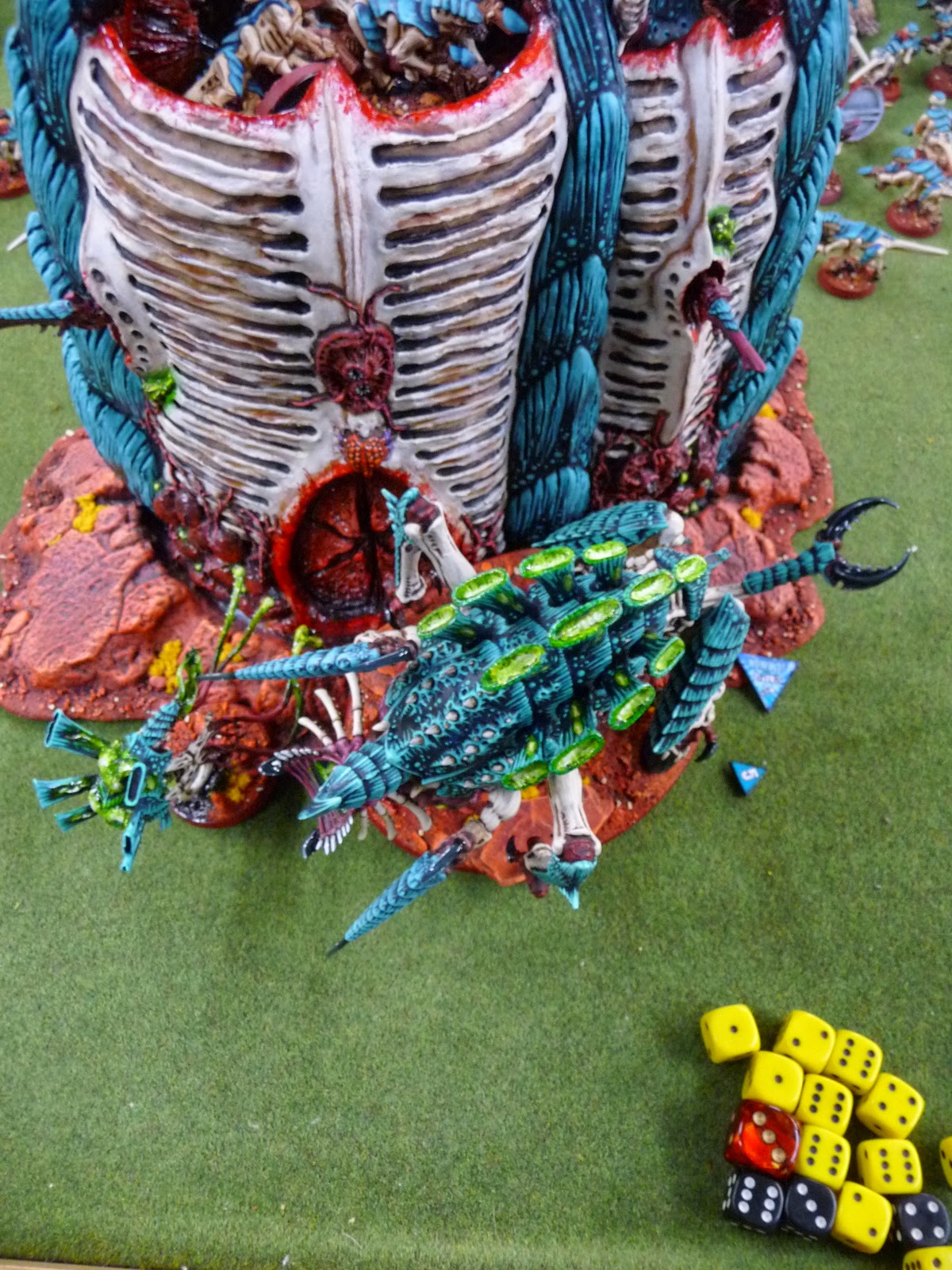 So much for it's armour save, the Tervigon pops, taking another slew of its babies with them but I still manage to stay on the objectives. 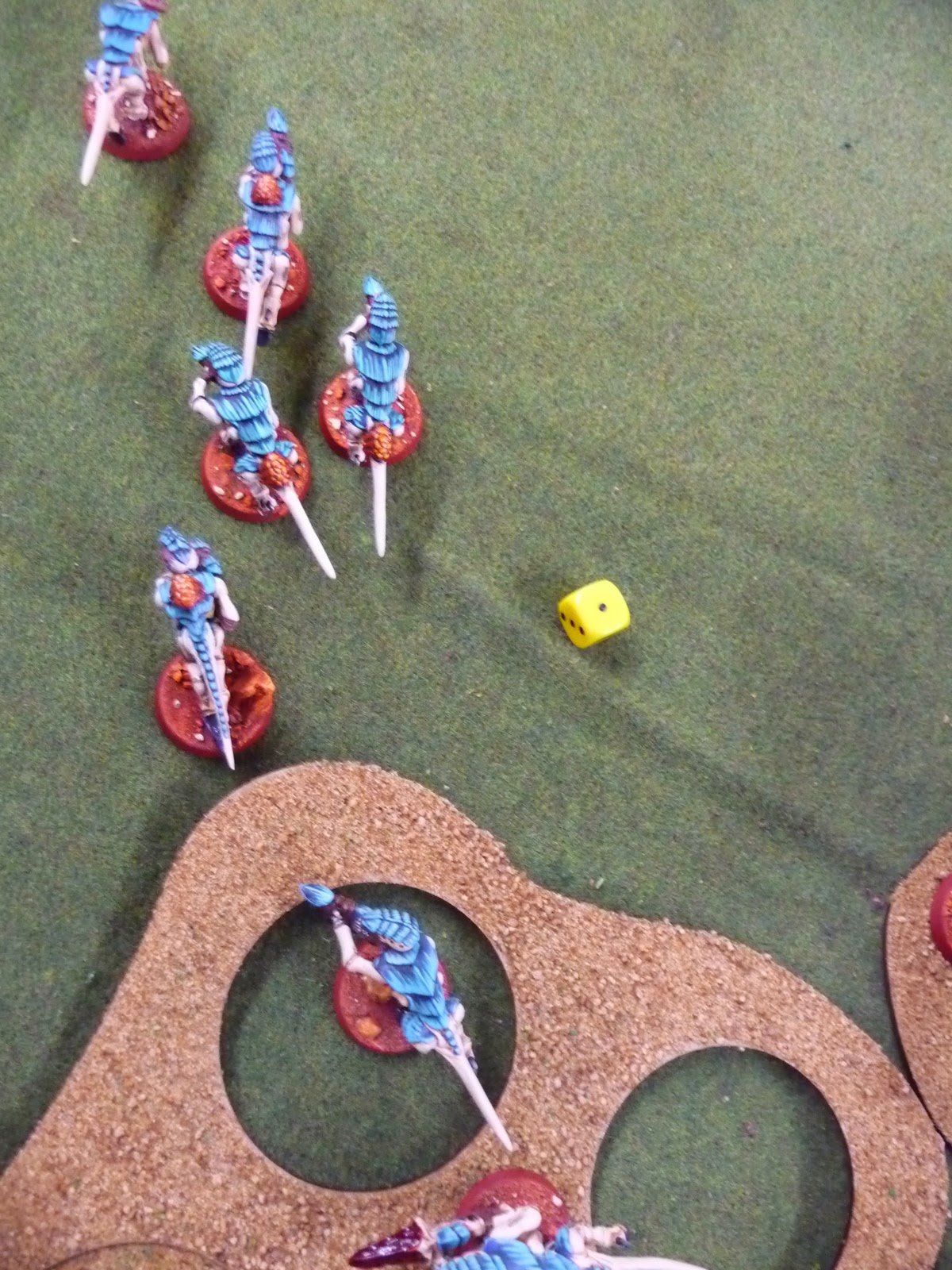 With the final turn in play [well I mean, as time runs out] I score another 3 VPs taking the final score to 17:2. The Tau managed to perform a great display of precision shooting but failed to grasp the tactic of holding an objective. 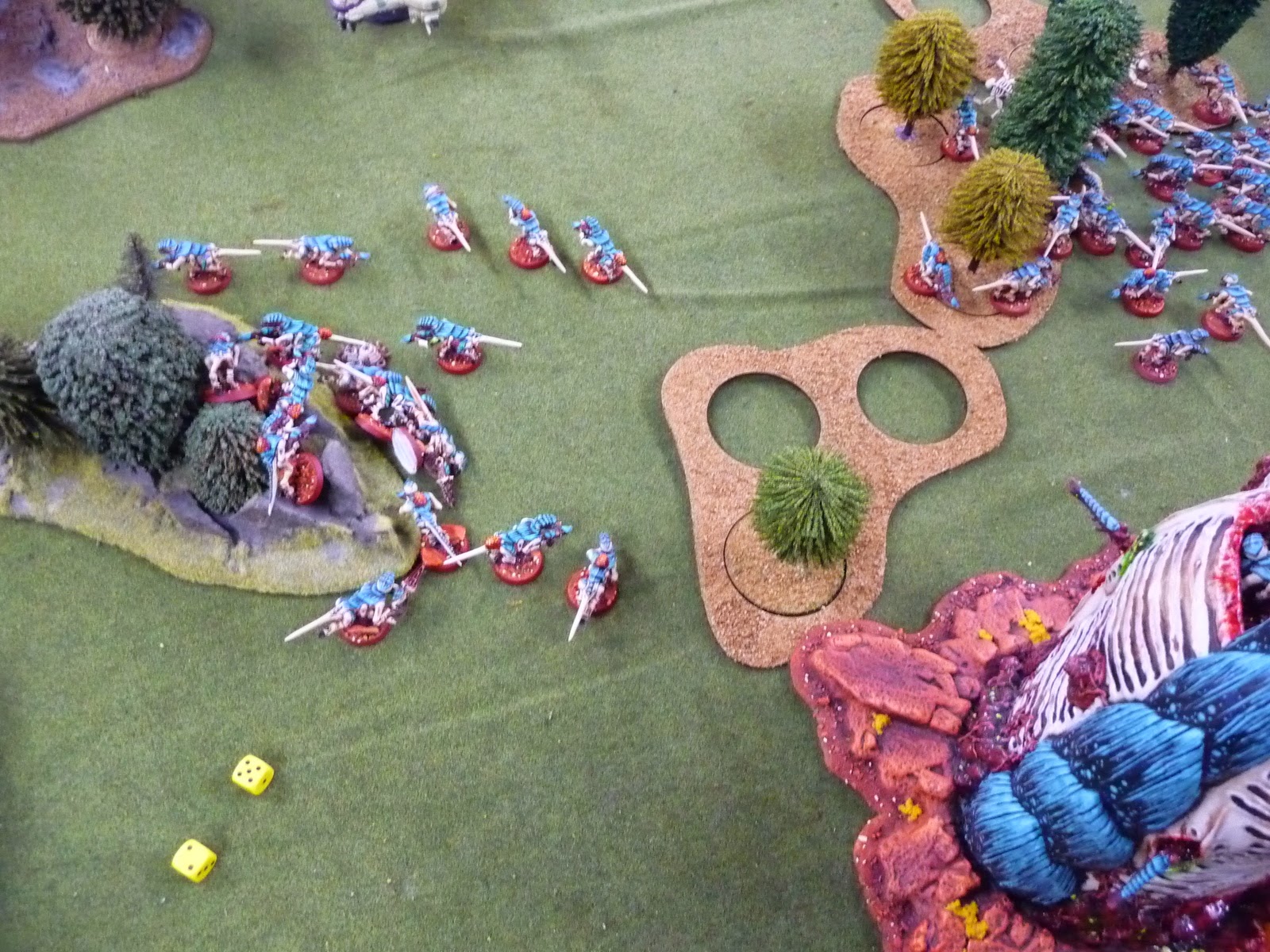 Having a chat with Gareth I think he felt the same way Ben did when we played, by advancing on the objectives he would have been exposed to some teeth and claws, although I doubt I'd have got too many kills on the armoured or high toughness models. I think the Skyshield influences you to stay put too. Of course Tau can do that with their long range firepower but when you pay for this defensive stronghold it creates a mindset to stay on it for as long as possible. Ultimately he left it too late to capture the objectives but I think that was also because I'd spawned particularly well and had surrounded each point with so many bodies [something I didn't have the opportunity with when I played Ben]. 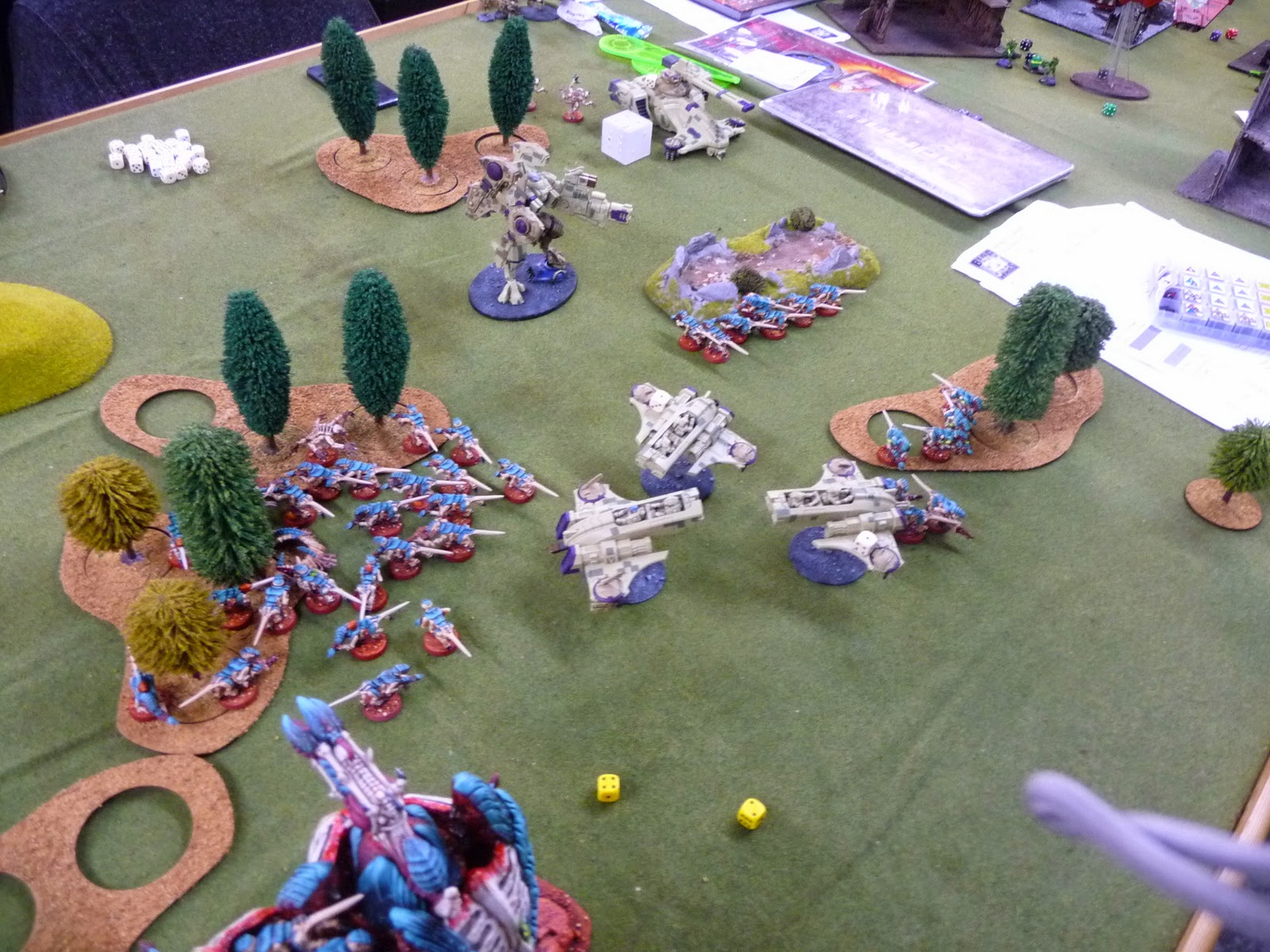 It was a great game, which sadly didn't reflect the damage Gareth had wrought but as I always say you have to play the mission. But we had a whole lot of fun and I managed to come away with a win so at least 'nids are better than Dark Eldar ;)

One other point of note is how Gareth achievd his digital camo. This was revealed in another lengthy chat mid-game when we should have been attempting to score objectives. He sprayed the models with a Dark Green and then applied the sponge sticky pads used in decoupage to mask areas off then sprayed the lighter colour on top. He still has to add some shading but I thought it was a really clever and effective trick, so thought I'd share. 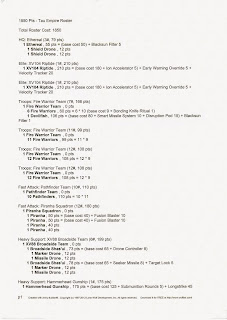 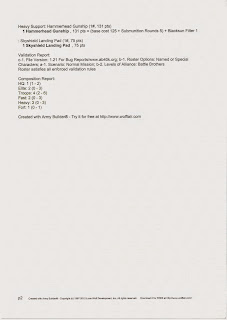