'Hey Sports Fans', having glutted a bit on oversized 40k games in our last few showdowns it was time to bring some fun back to PeteB and I's gaming and in comes Blood Bowl - 2nd Edition! Pete hasn't played for 20+ years so I had a bit of an advantage, both with the few games I've played over the last three years and my numerous games of the current version of Blood Bowl on my son's DS. 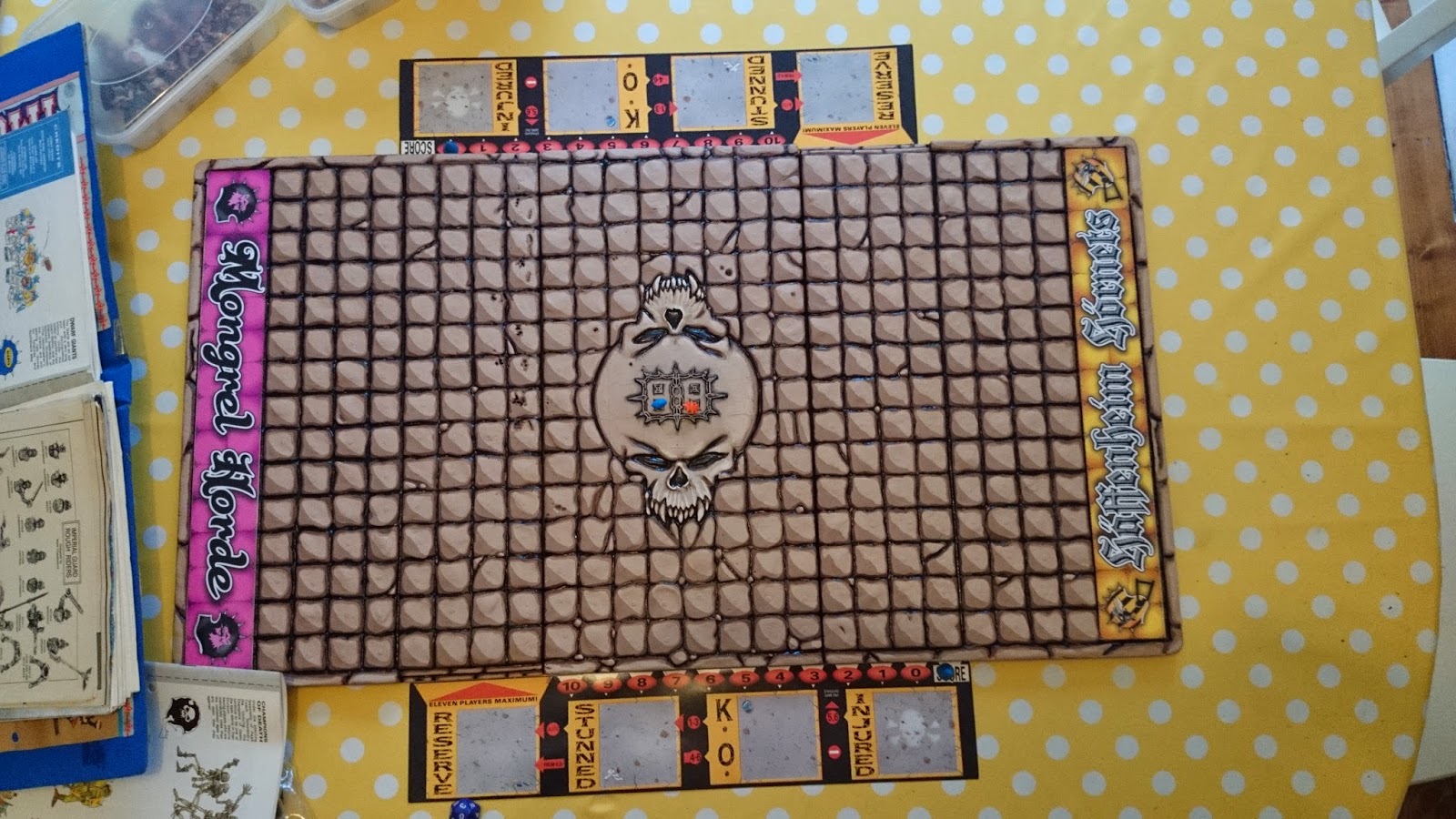 I thought it only right to let Pete take the Elves, given his love of space pixies and I went with my Skaven. Their stats are pretty similar in 2nd Edition, except Elves are much better Throwers and Catchers and I get an extra Movement, which became surprisingly useful. Pete took most of the pictures so it will be mainly from the Elf perspective but I'll try to relay the action. I started with the ball, we immediately decided not to use the deaf/blind Dwarven referee, better stick with the normal rules. 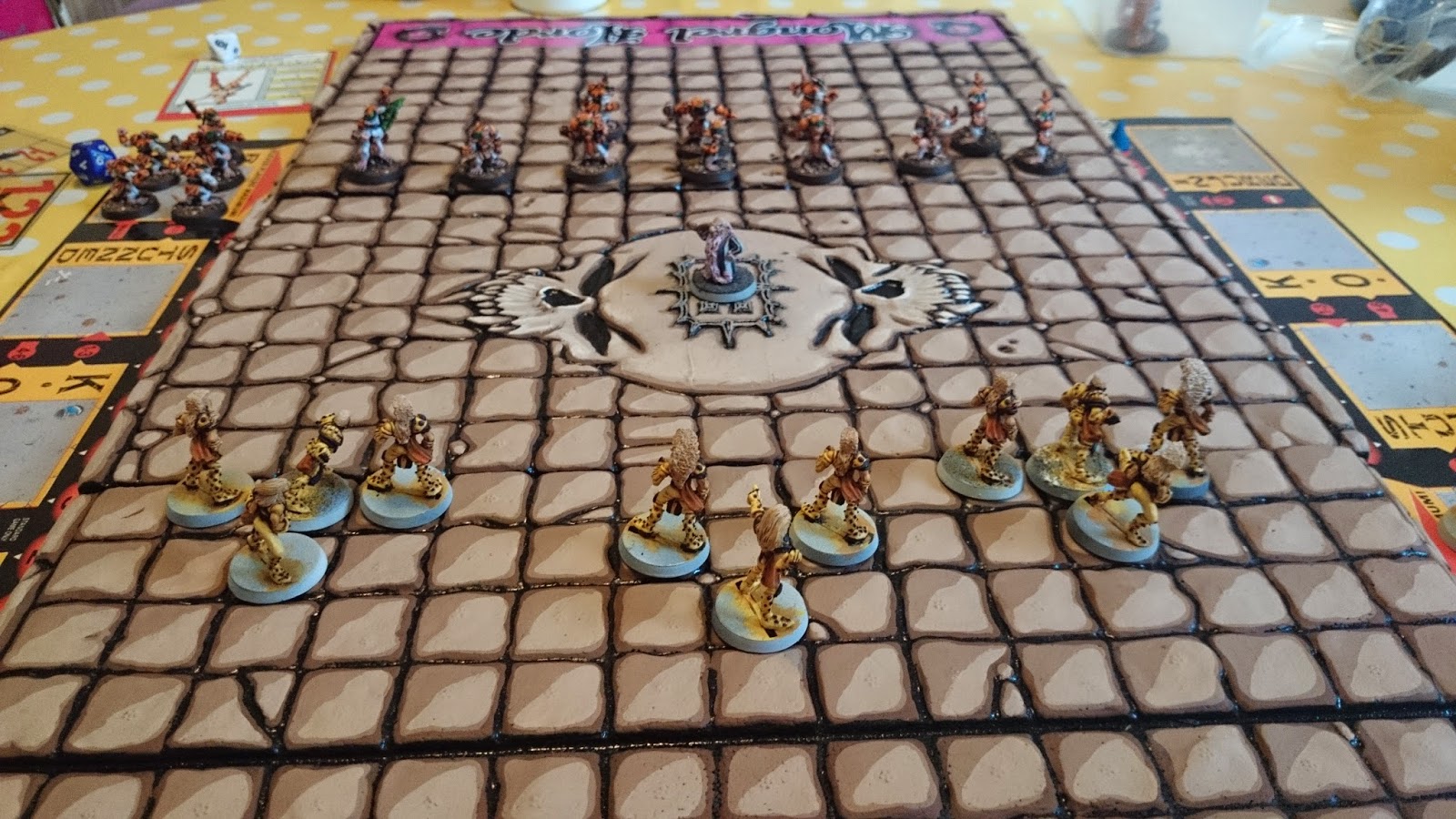 Having made it half way up the field the Elves hit back, managing to KO one of my Skaven and Kill another! Pete ended up with two Stunned and one KO'd Elf for his trouble. This did not look good, but I still had the ball and my Catcher with four arms and tentacles [just the model, he didn't have the mutations] had already sprinted past the Elf line of defence [out of shot] and was heading for the End Zone. 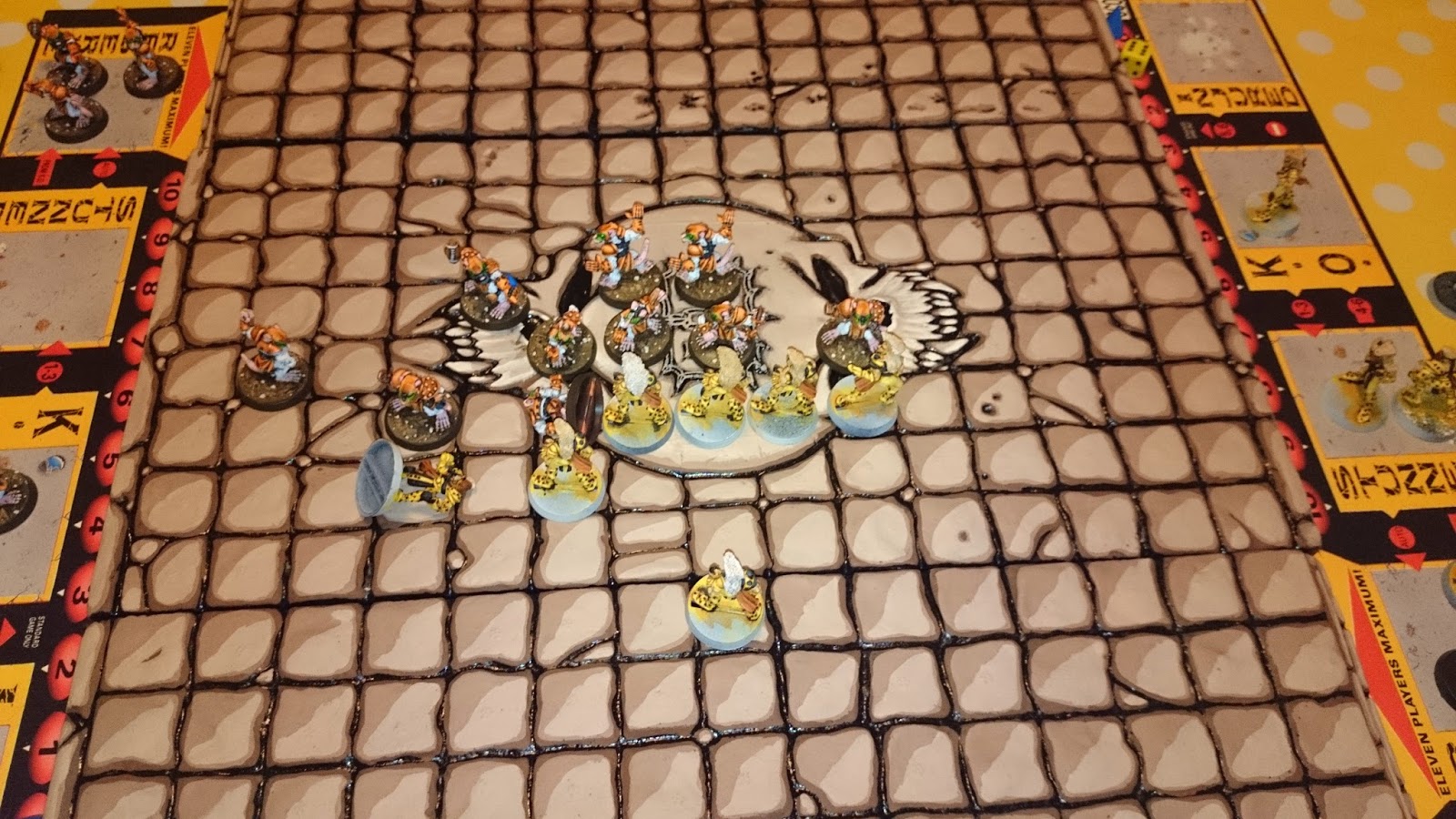 The Elves caught up to my Catcher but failed to bring him down. He was able to dance through their tackle zones, reach the End Zone and secure a Long Pass from my Thrower to make it 1:0. 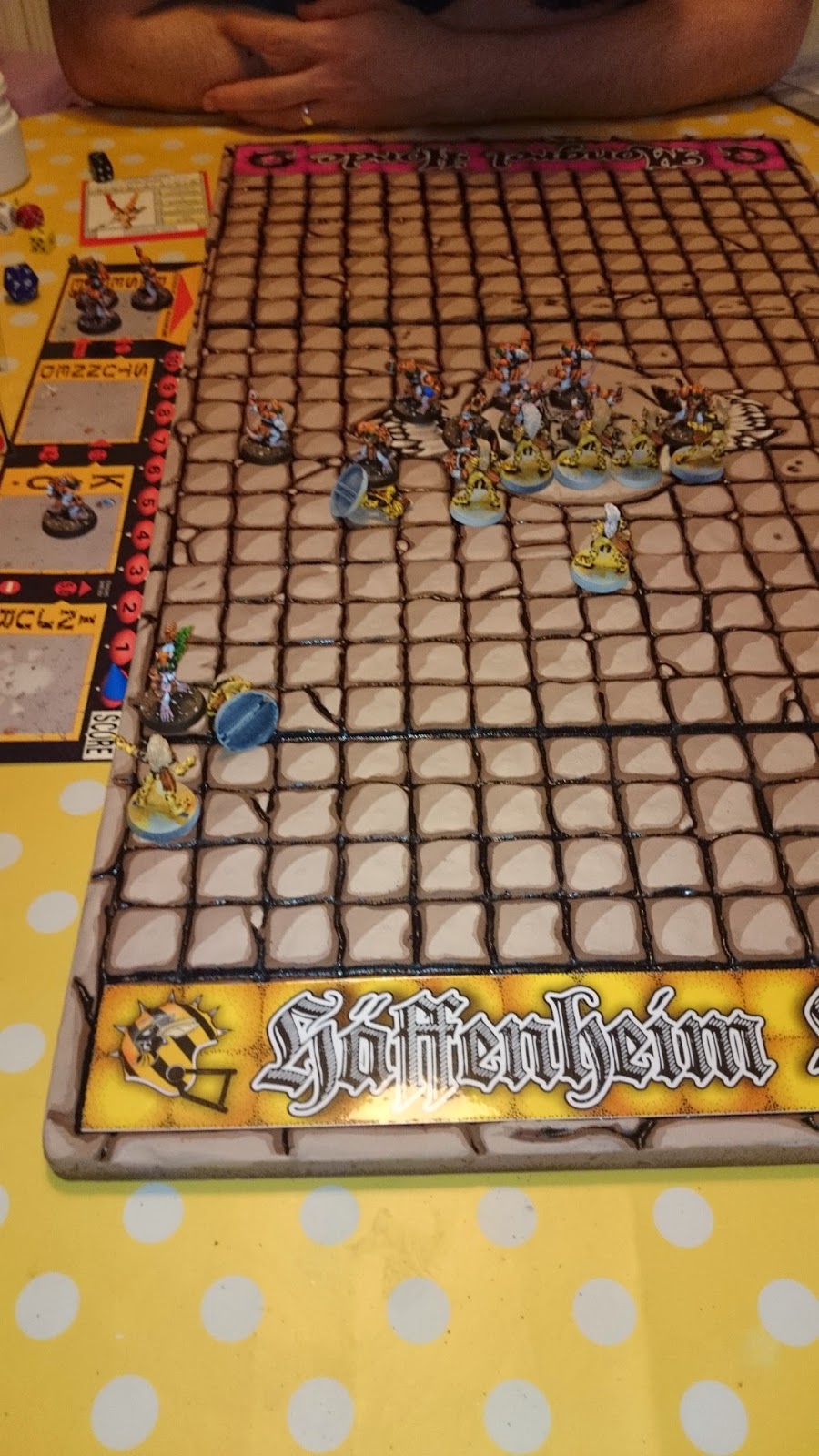 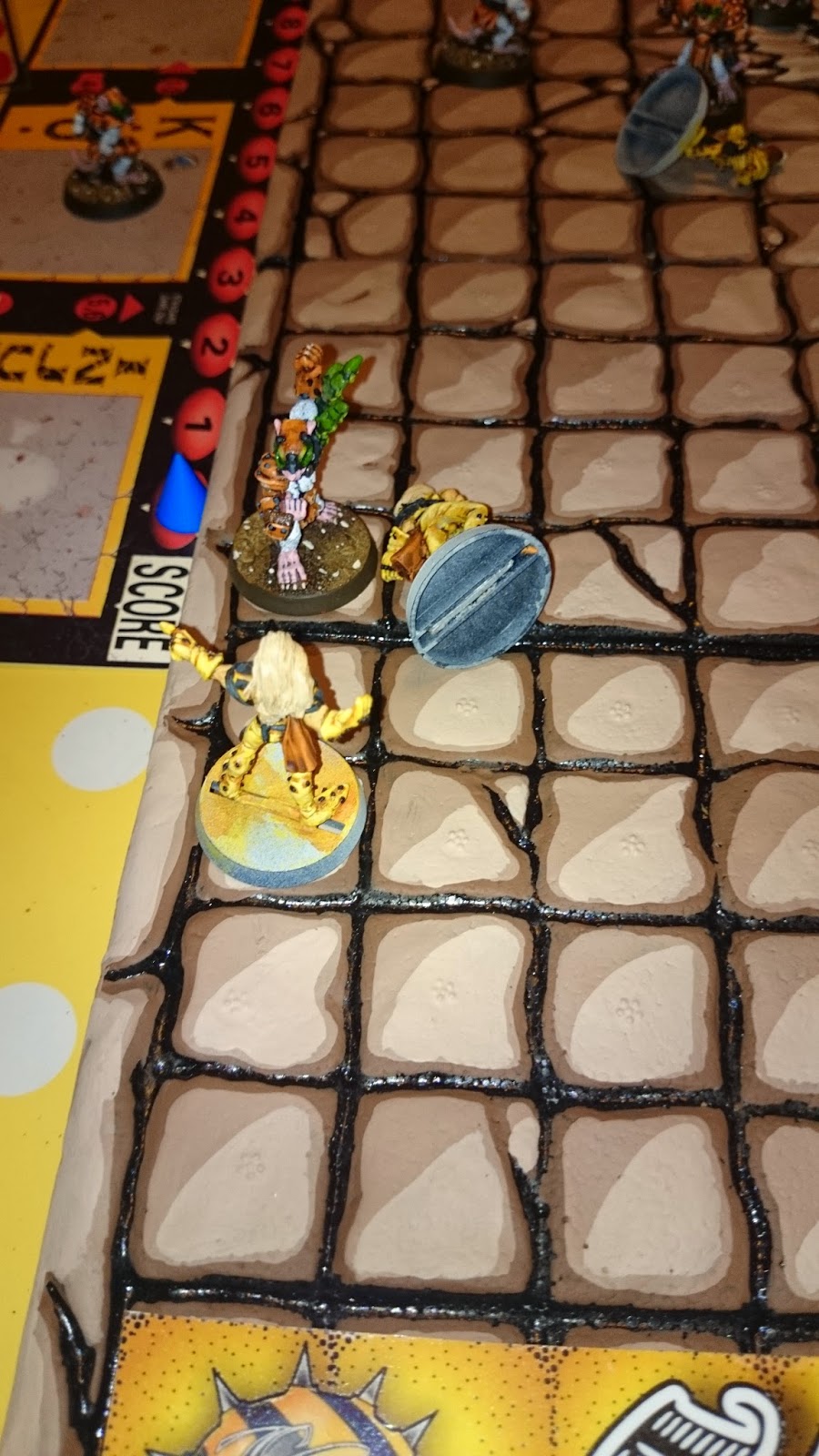 With the Elves taking the Offensive Pete adopted a crazy twin wedge formation. Its great to see how other people play. Having been so long since he played he was just trying stuff out and it was actually challenging to  counter his tactics. 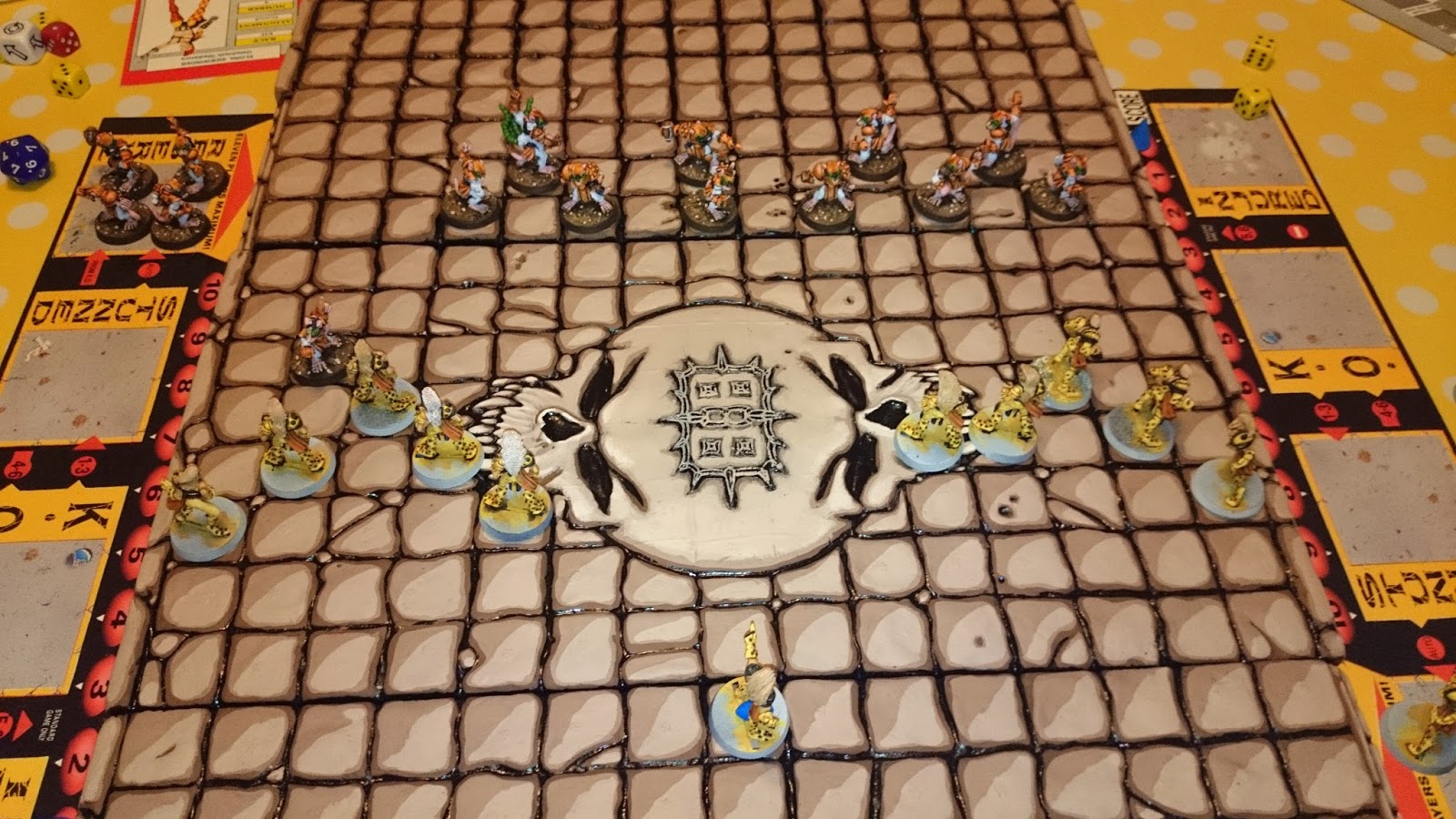 Pete managed to get one of his Elves behind my line but went and injured one of my Skaven which would later allow me to bring on a reserve right next to his Catcher with the ball. 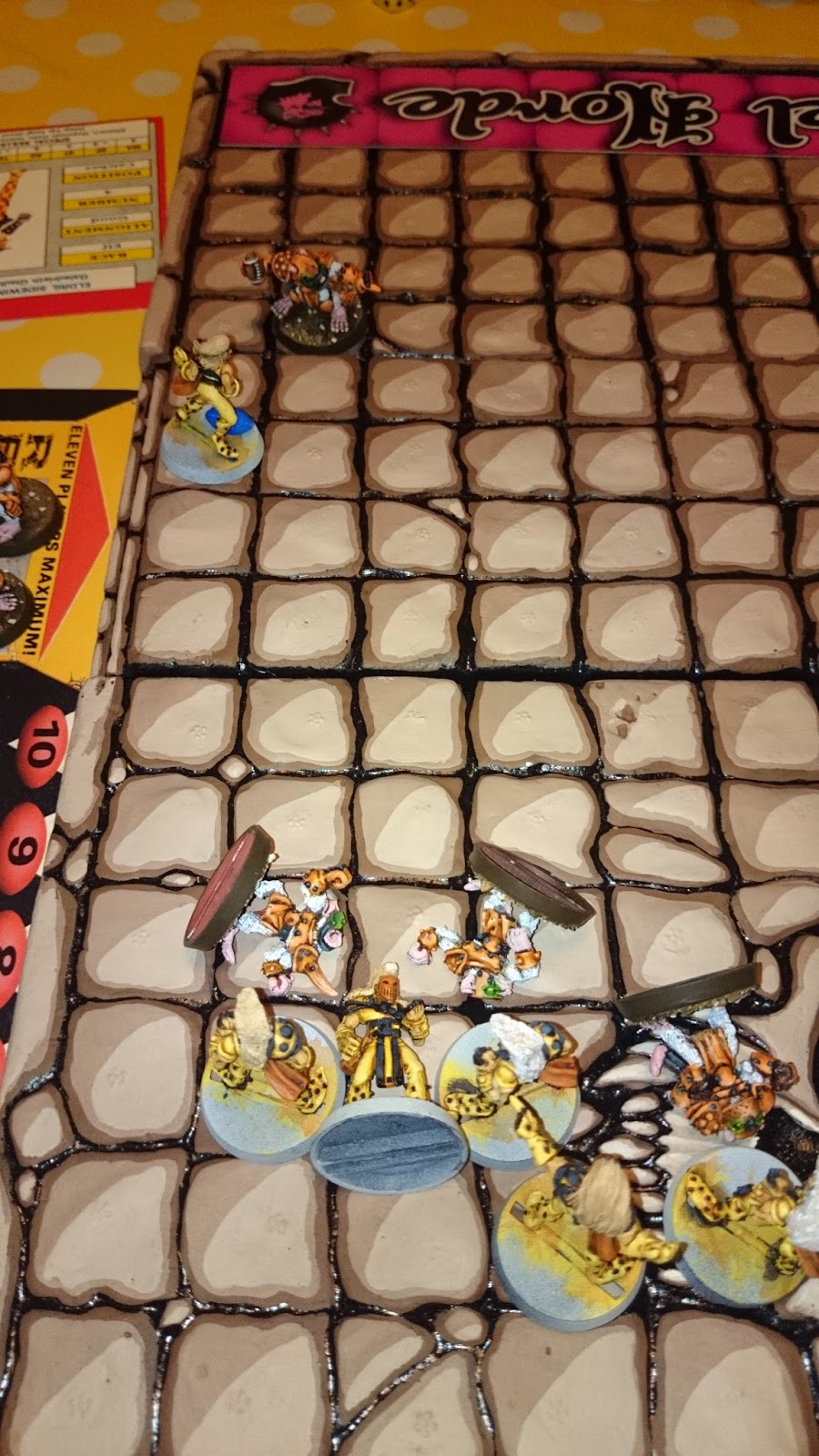 Unfortunately my reserve wasn't able to take the Catcher down and he [or she, it's difficult to tell with Elves ;) ] danced out of the grasp of the Lineman and skirt [so it probably was a girl, skirts and that] round the Thrower to head for a touchdown! It was 1:1 but Pete had suffered a number of Injuries in the process. Substitutes were getting low. 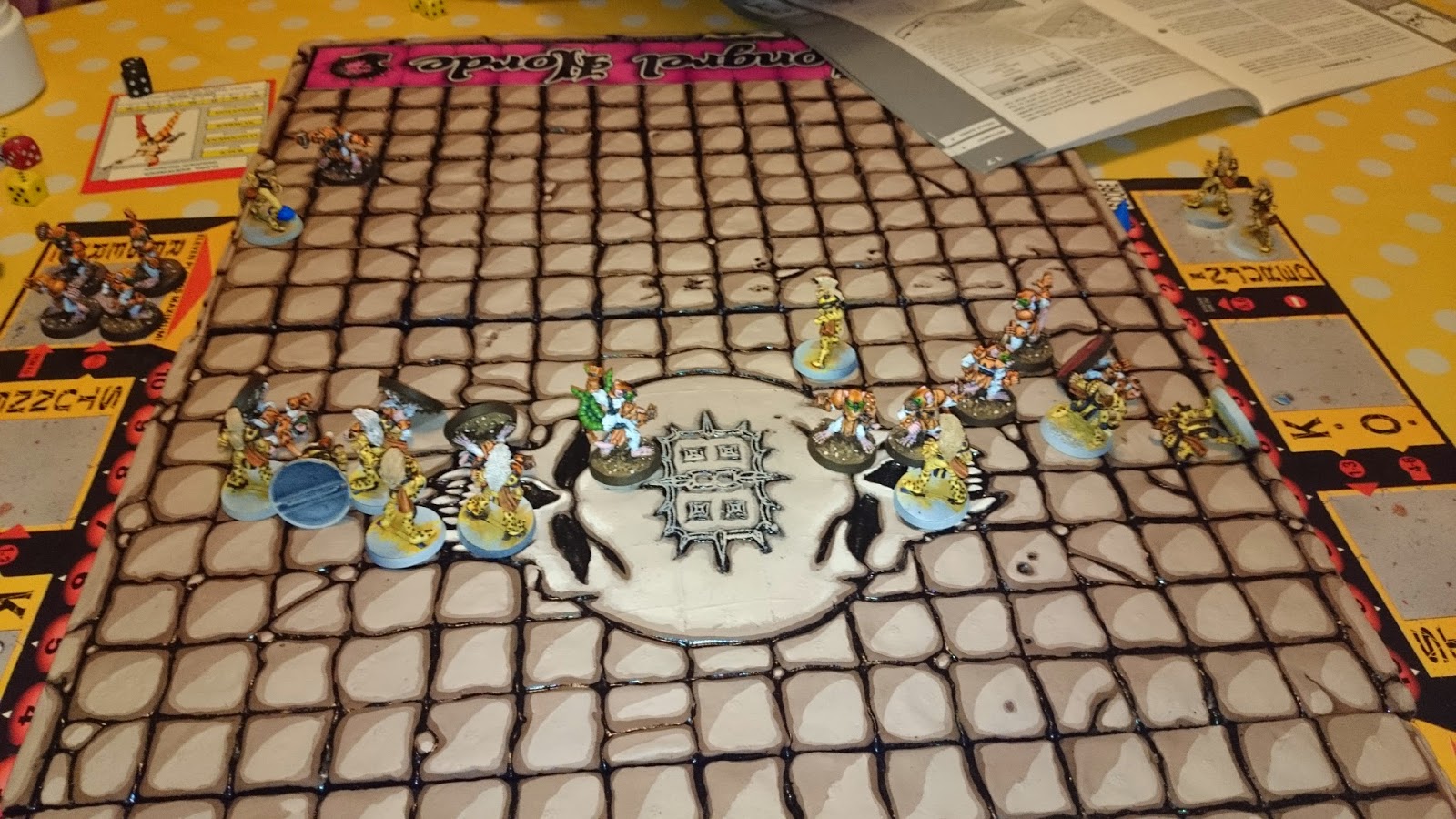 I'm not quite sure why Pete has the ball again here, perhaps this was after our third Touchdown when I went on the Offensive and made it 2:1 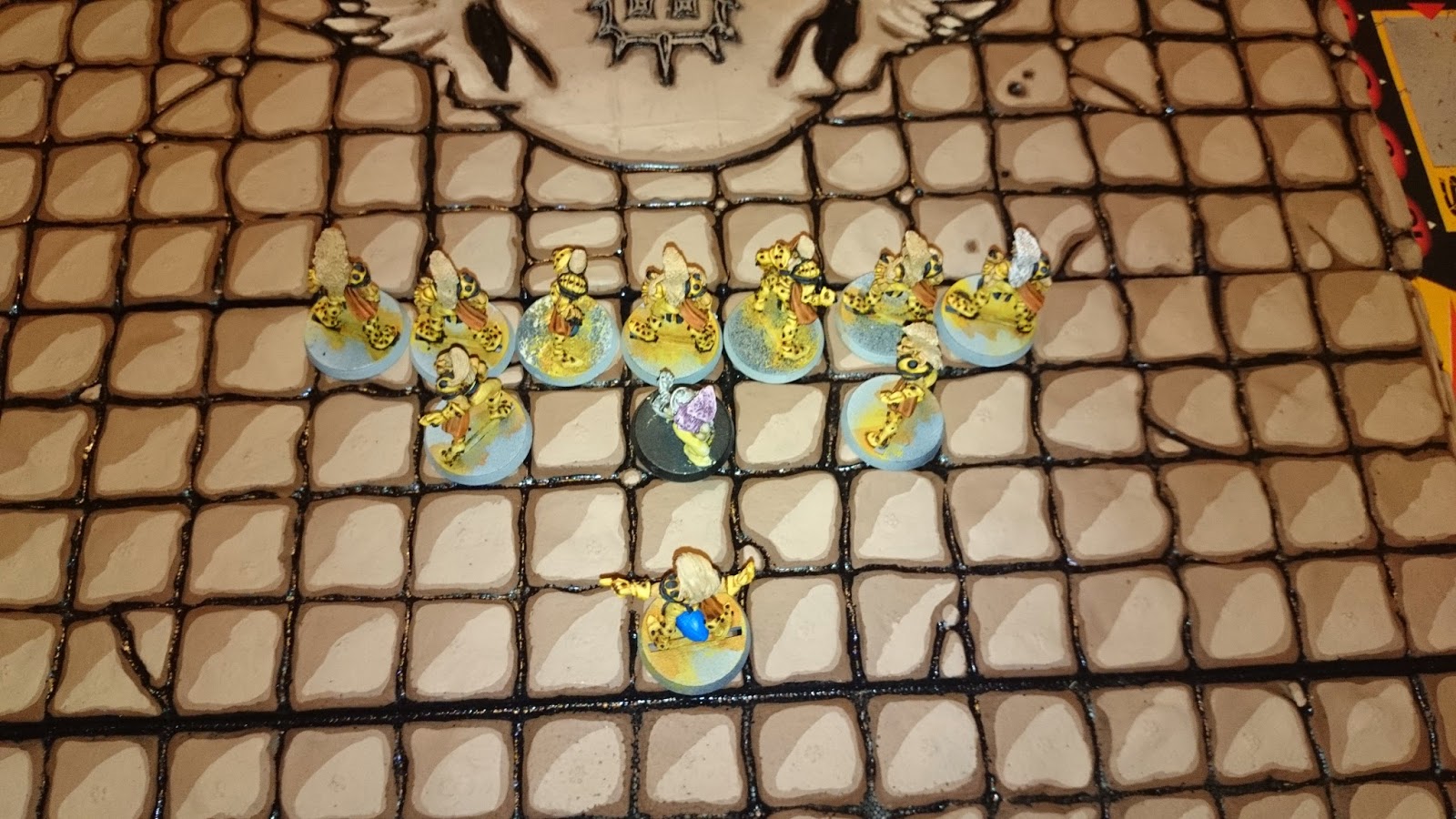 As you can see though I only have one reserve left so these guys were going to have to stay on their feet. The Elves would eventually get all the way to the End Zone, with a Catcher waiting and the Thrower just miss-timing his throw for it to go wide. The Skaven managed to pick the ball up on the run and head down field 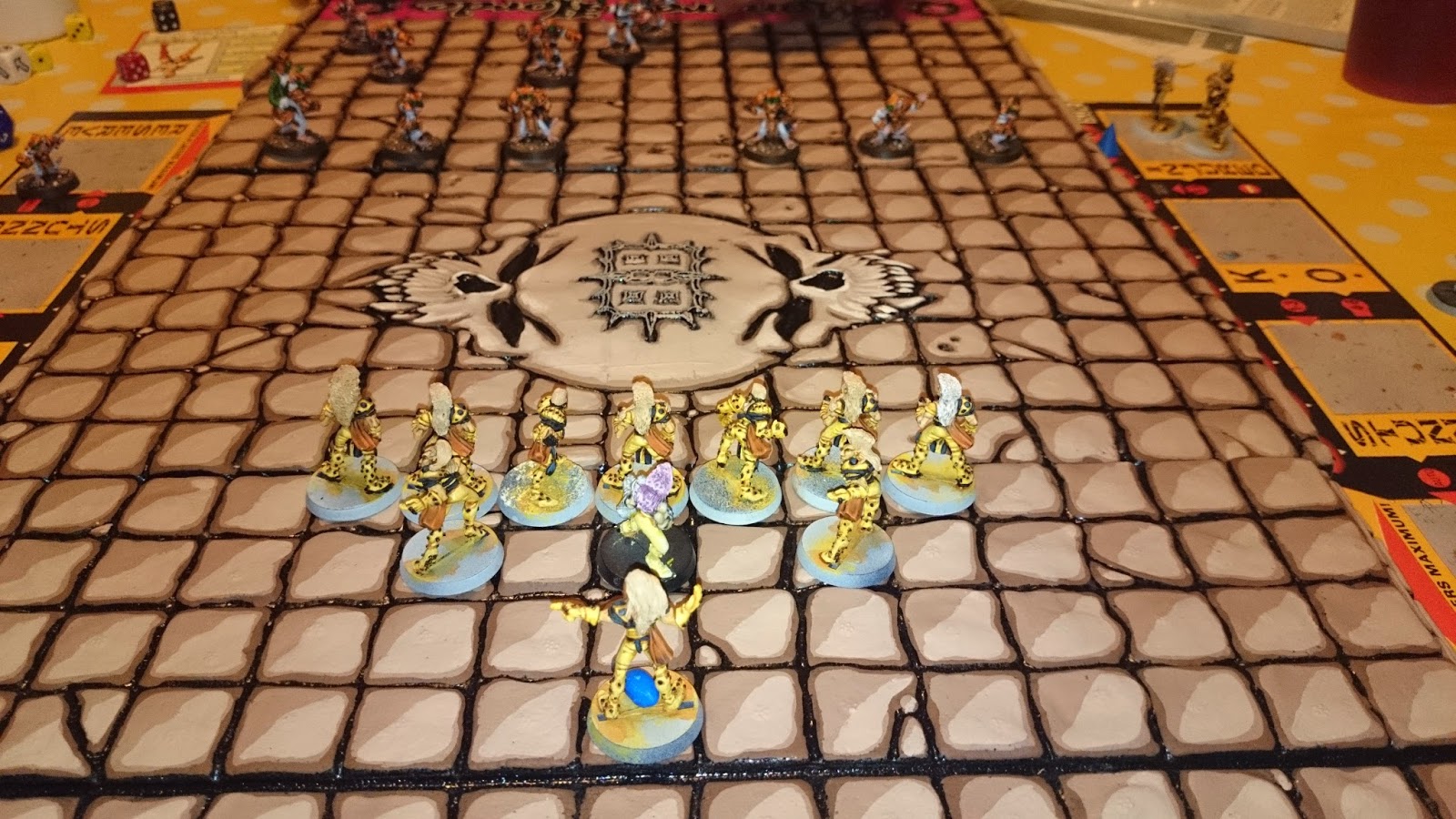 By this stage the Elves had also suffered a Fatality, six injuries and a bunch of KO's 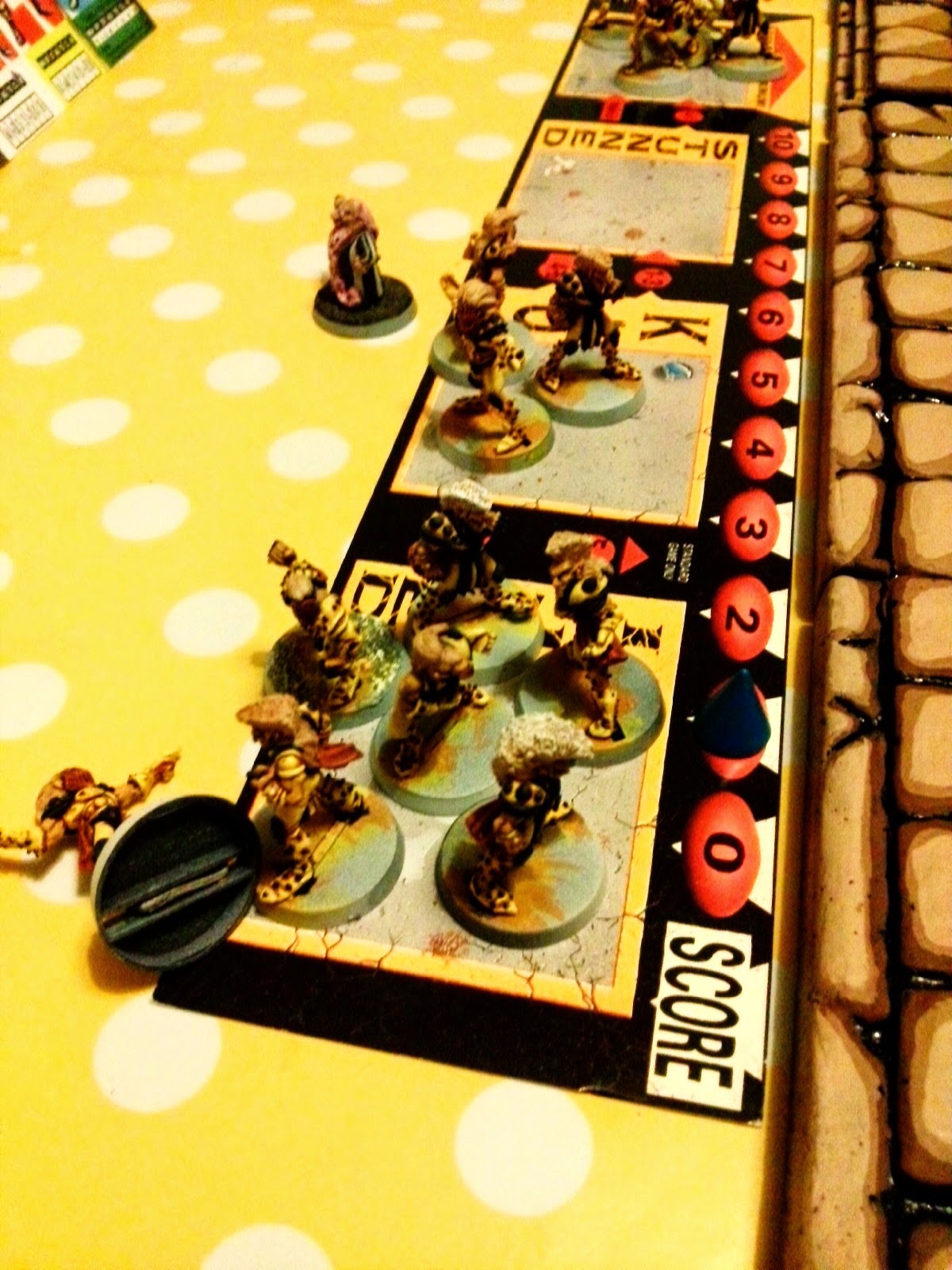 The Skaven were fairing a little better with only four Injured alongside their dead team mate. 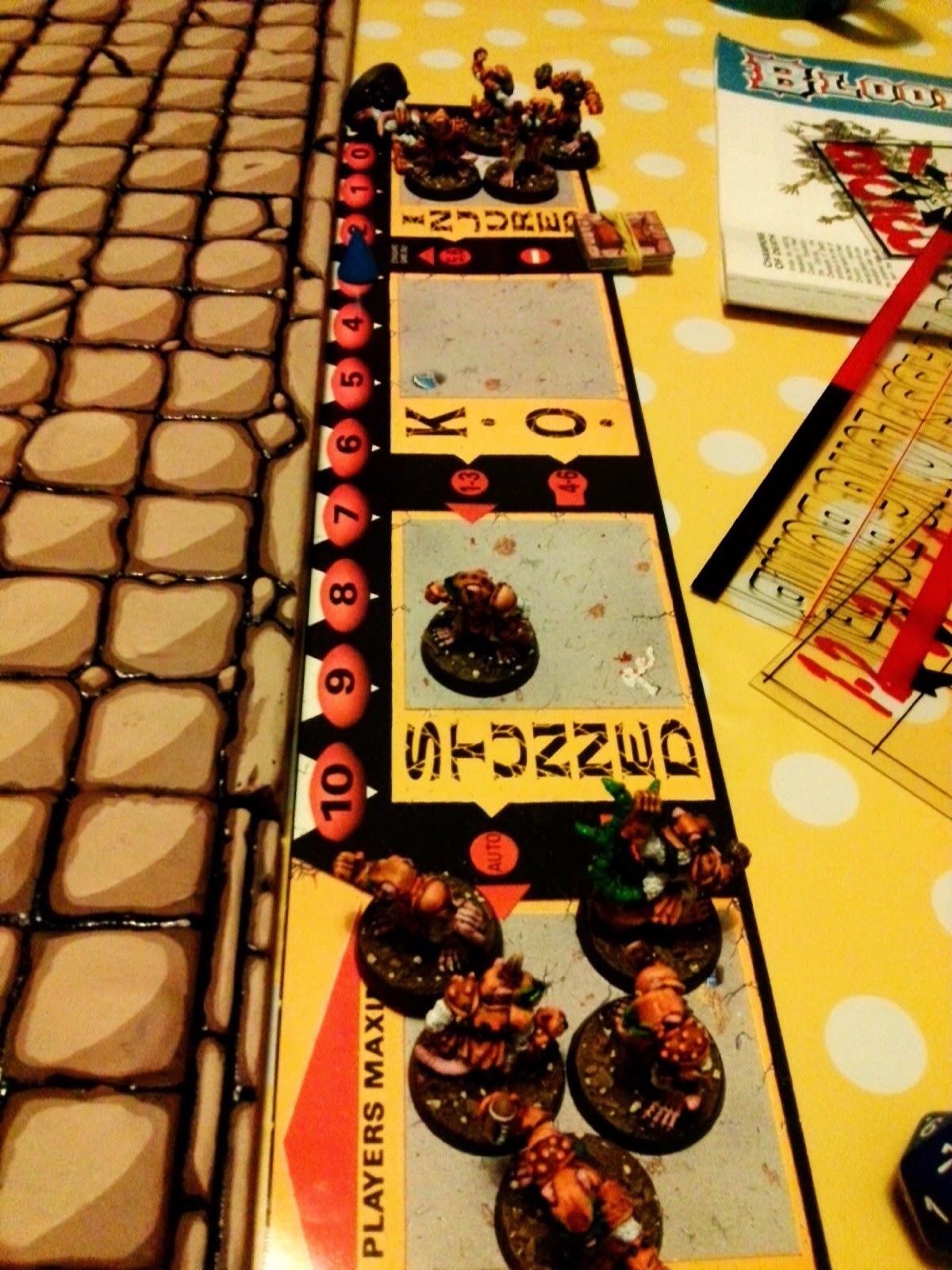 The Ball is in the wrong place here, it had fallen off a base. I had managed to get quite a few Skaven in scoring positions. 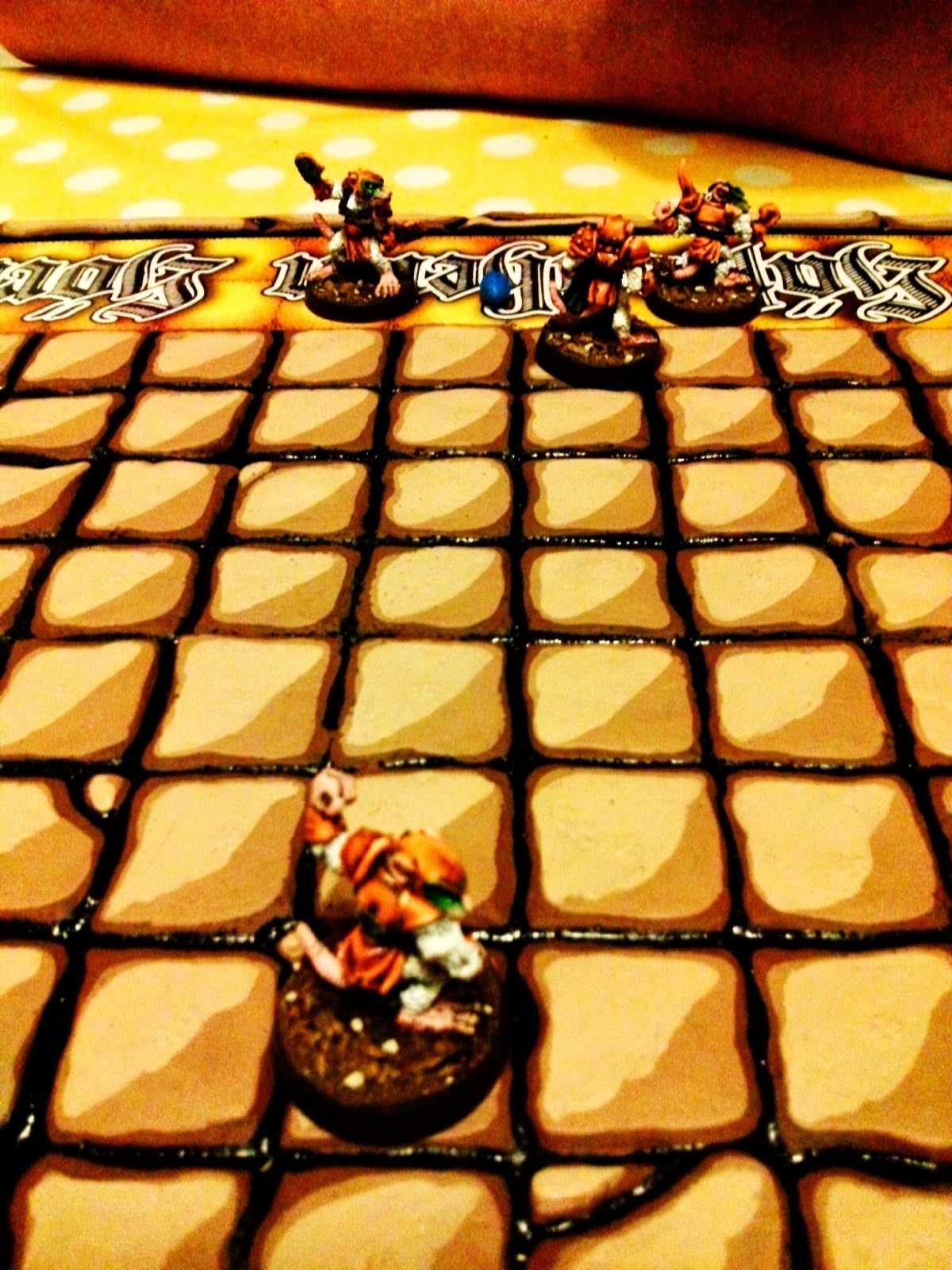 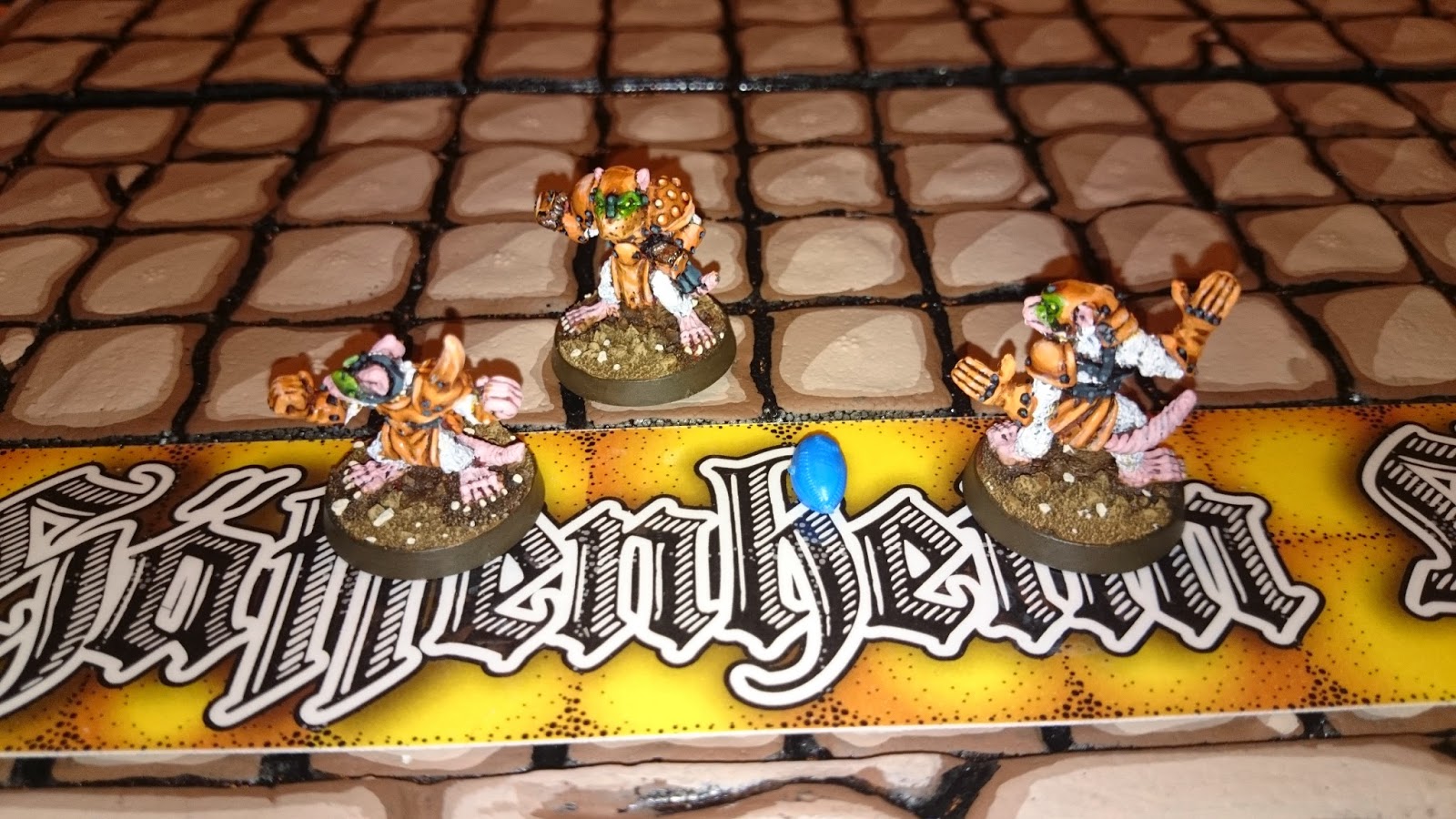 and complete a pass to the Catcher. 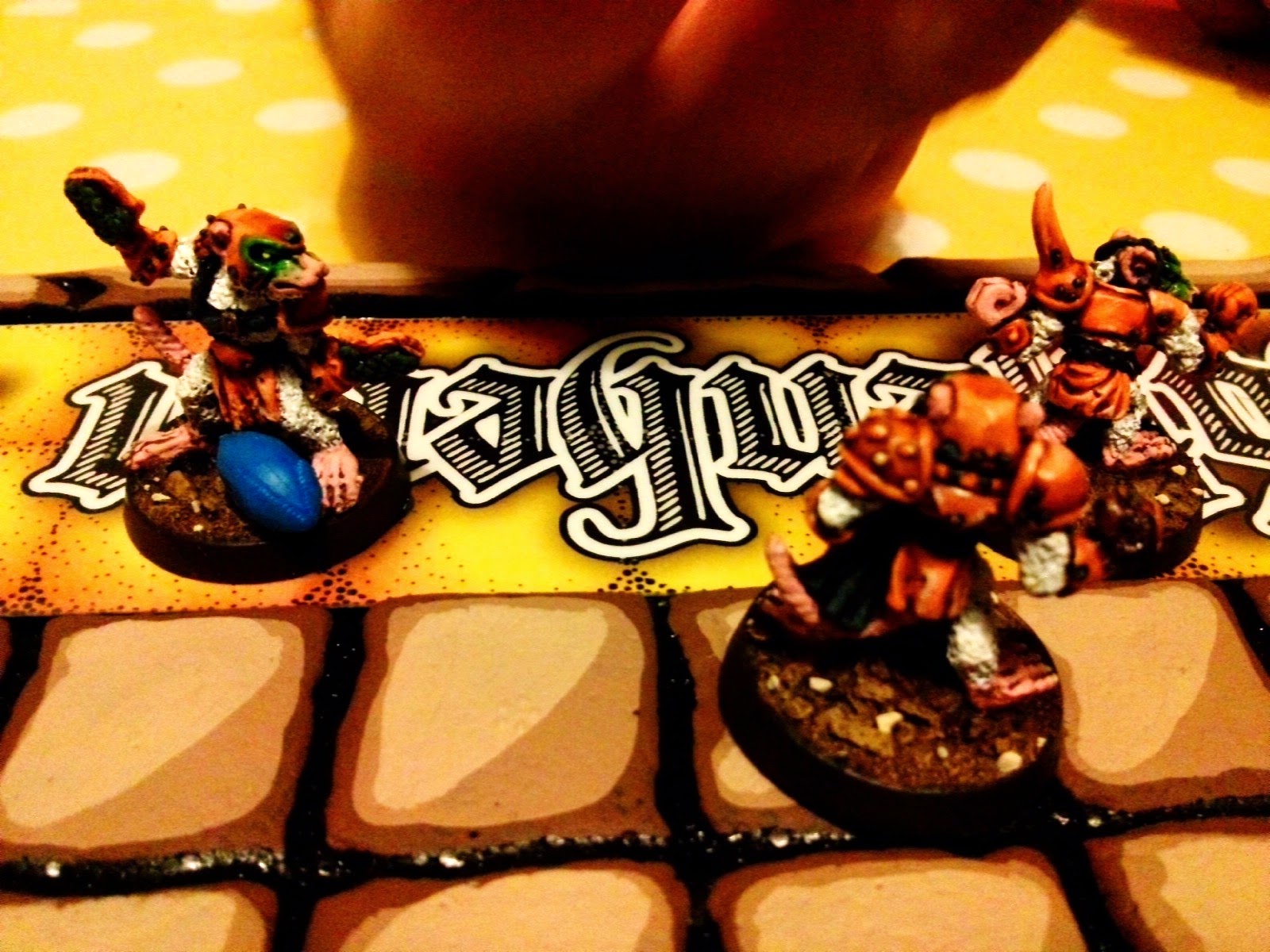 Both PeteB and I agreed this was the most fun we'd had in a long time gaming. I'm still not sure if we should adopt the current rules system. 2nd Edition allows you to move every model you have the current rules mean any time you fail in your action the game turns over. I'm not sure which system works the best but given I had only 8 players left standing and Pete only 6 clearly being able to lose so many, which wouldn't have happened if just one model had failed their block, forcing a turn over.

We'll definitely have another game, I just need to finish the Elves and look to get that Treeman so we can both have a Big Guy.
Posted by 40kaddict at 12:12