Moving on from Saturday's doom laden post we are down the rabbit hole now folks! Armies on Parade is a go, despite my fear-mongering to the contrary. I hope anyone reading this blog, in particular my gaming buddies, enters a board. I see it as a showcase of what you've done all year, a 'parade' of your painting and hobby efforts so I hope everyone tries, they've already put a lot of the effort in afterall.

Last year it was all about the army, a simple board swamped with the Ferron Splinter Fleet of Hive Fleet Gorgon. This year I'm going to run with the OTT idea I alluded to here and here's where it begins. I'm a little paranoid, unrightly so, but isn't that the nature of paranoia? So I won't be revealing what the plan is, you can just try and imagine initially hopefully guess along the way, it should also help with the blog because I can just show pics and micro-blog the progress with less explanation, at least that's the plan.

Firstly I have about £10 worth of MDF and wood. I went to the local GW to confirm I could enter the same army and they did offer to sell me a Realm of Battle tile. They'll do this individually for AoP entrants, in case you didn't know, I think they're £30 each, though I'm not sure if you can get the hill sections, just the flats or even the new Sector Imperalis boards [although I doubt it]. At any rate mine is going to be covered a lot with insulation foam so really MDF is fine.

Once again I'm making a corner piece, here's one of the 18" high back walls with wooden batons at the edges to make it more stable. These have three wood screws in the back and wood glued in place. 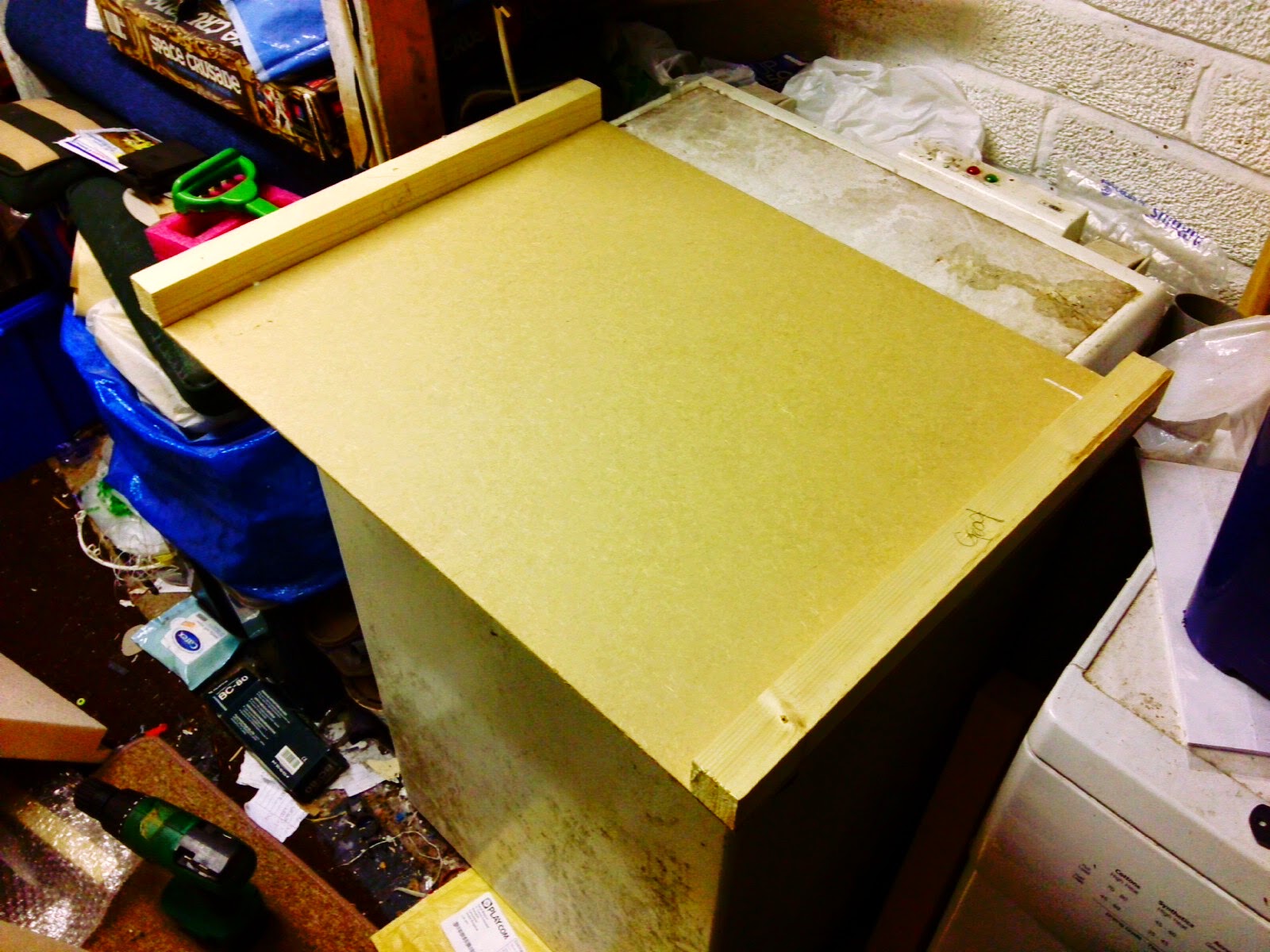 Here's the second wall, it only has one baton as it will fix to the first one. I'm thinking of using dowel rods to secure it horizontally in place. 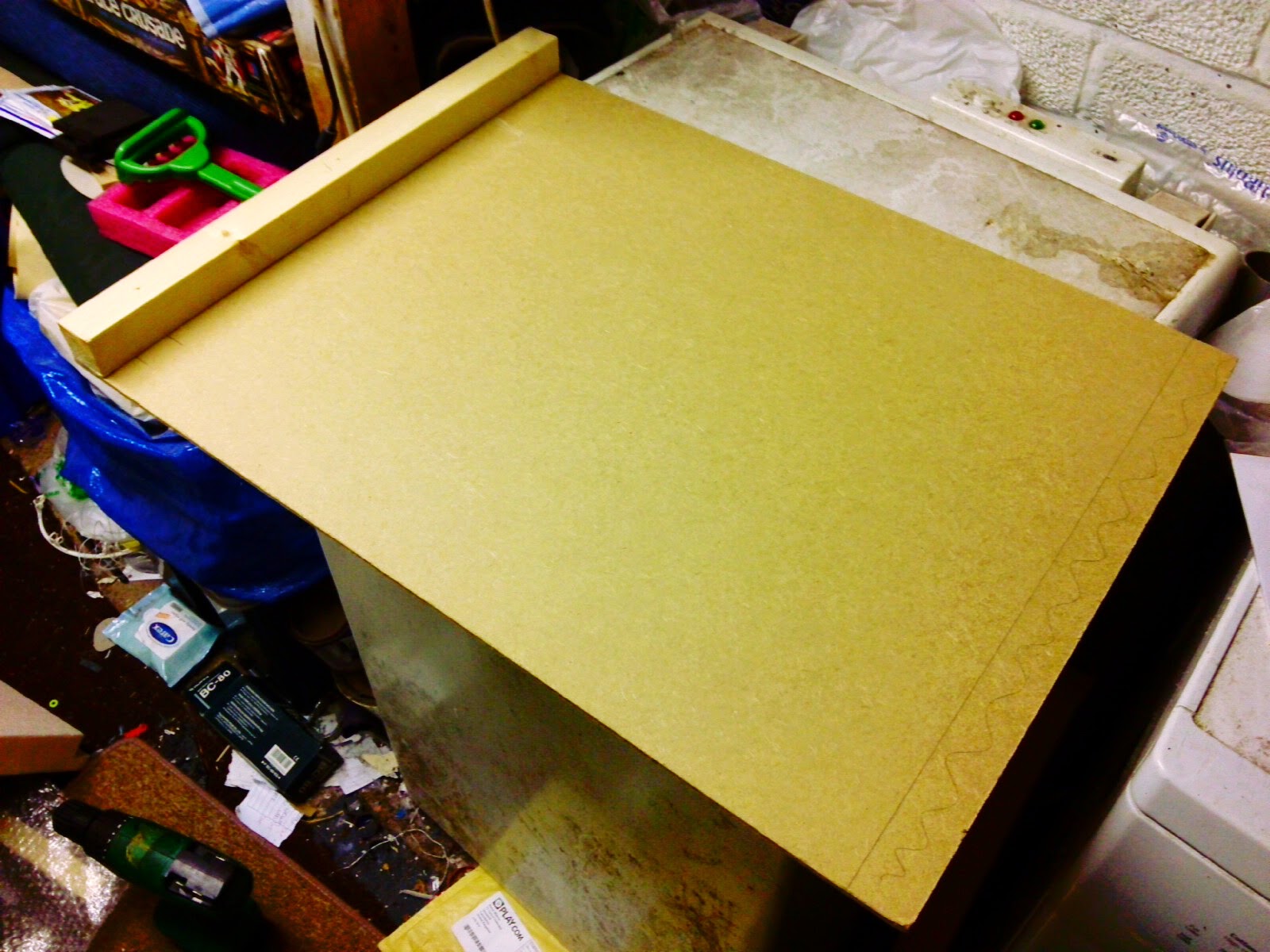 Here's the insulation foam, cut to fit the first wall 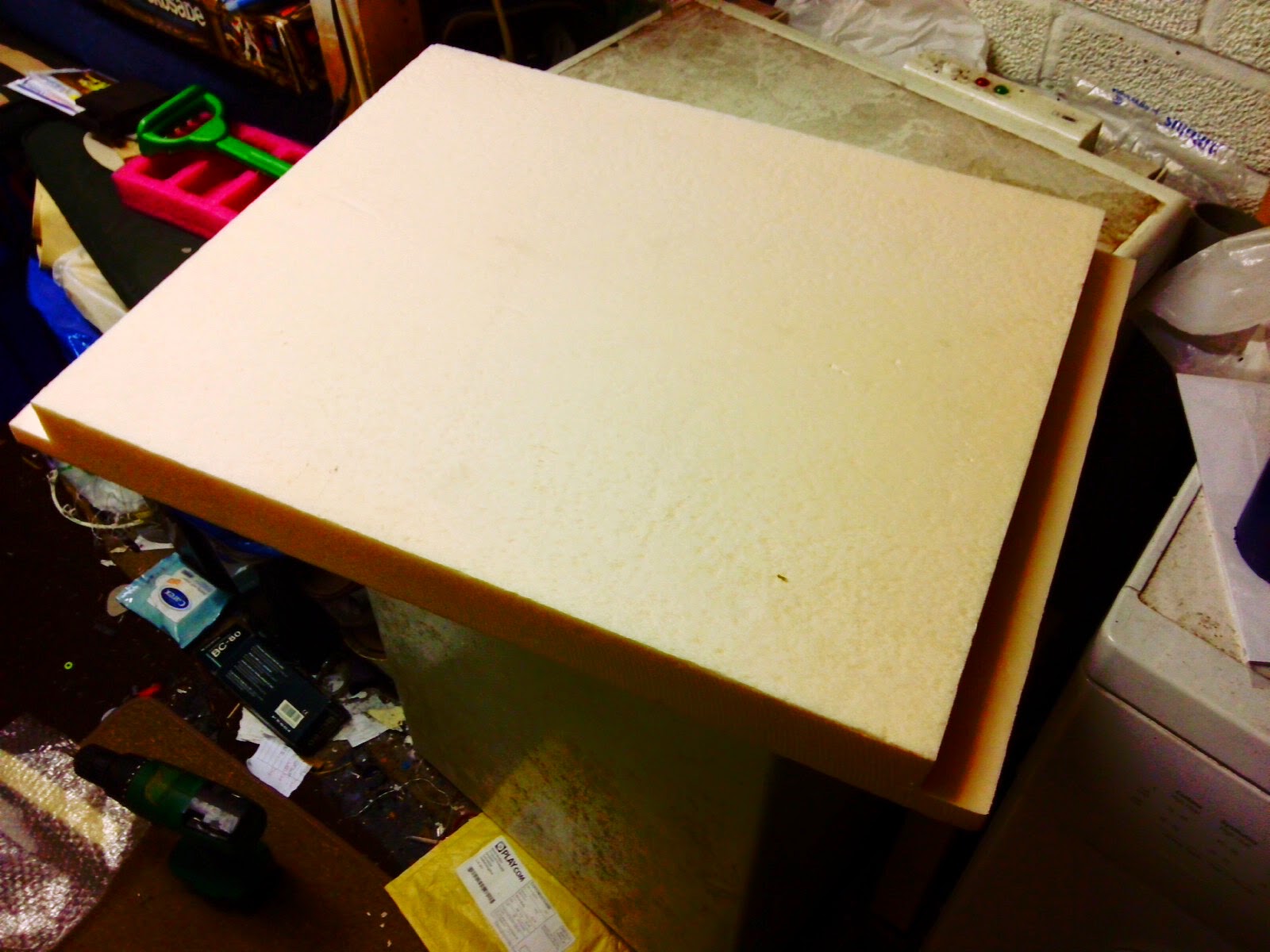 And the second wall is also trimmed. 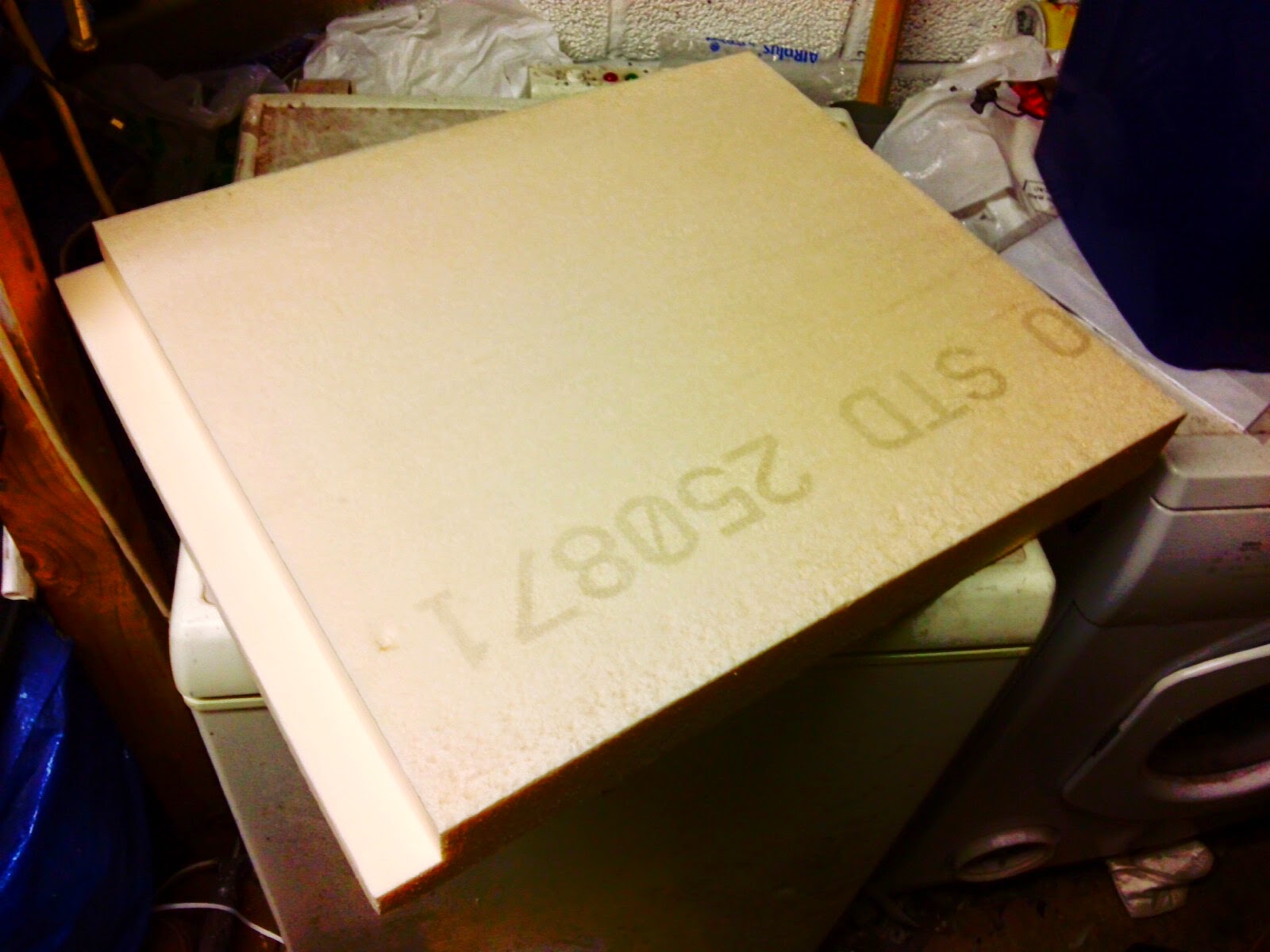 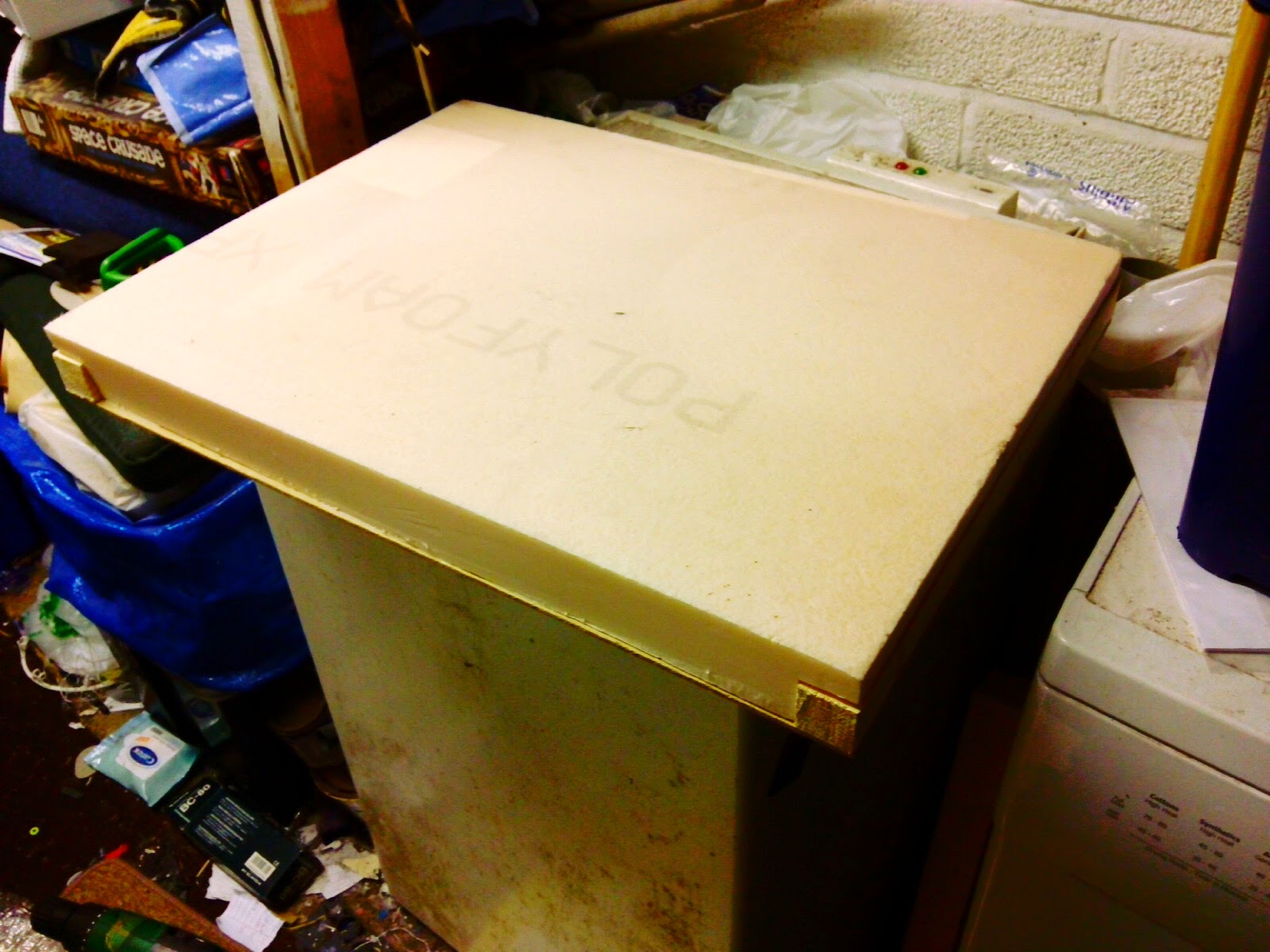 The second one is also glued in place, you can see the overhang where it can slot behind the first piece. 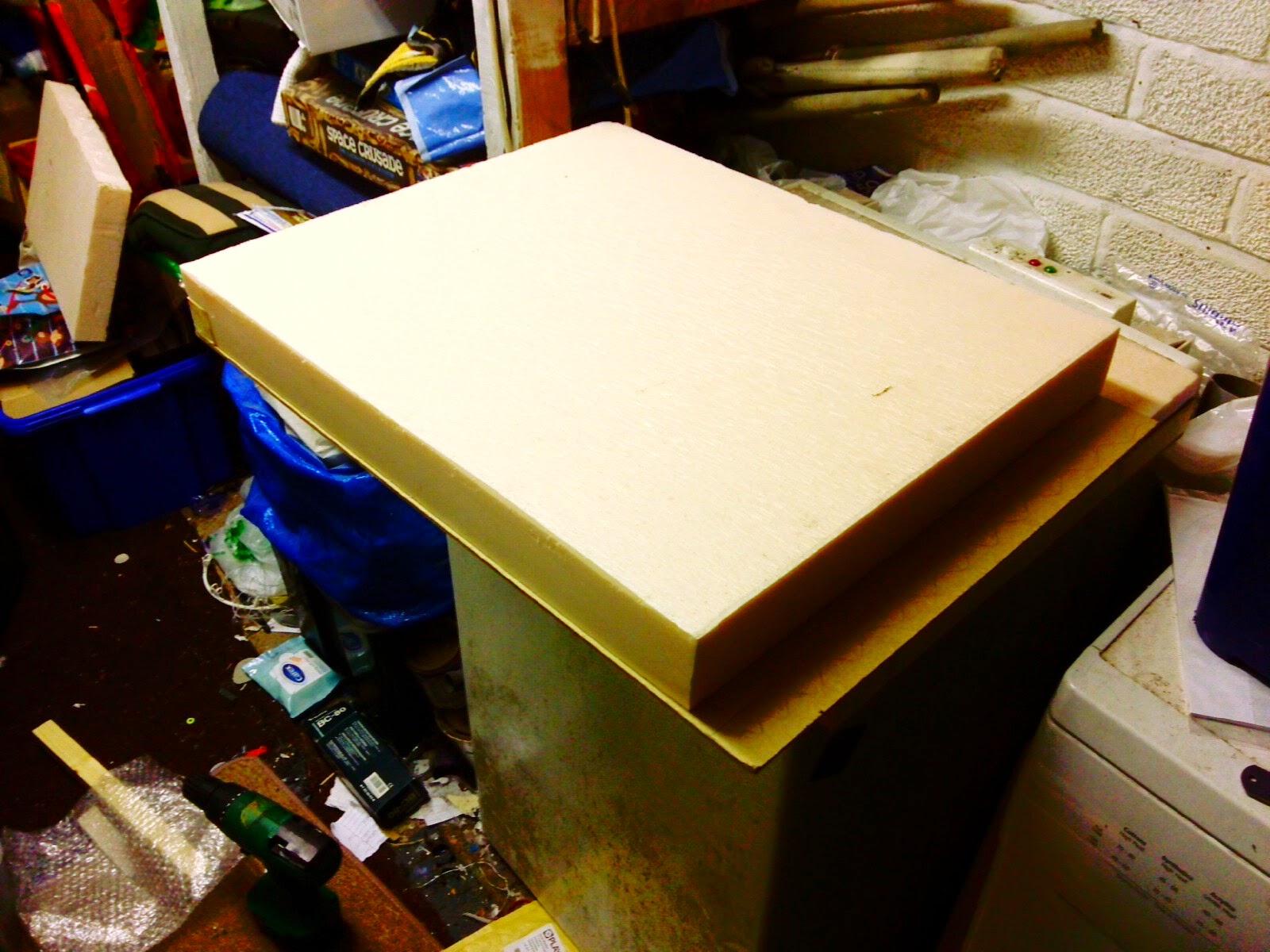 Here's the base, I went for 8mm MDF for stability this time, it's going to have the walls mounted to it afterall. I'll start marking where the foam is going to go on top, to join up with the walls next. 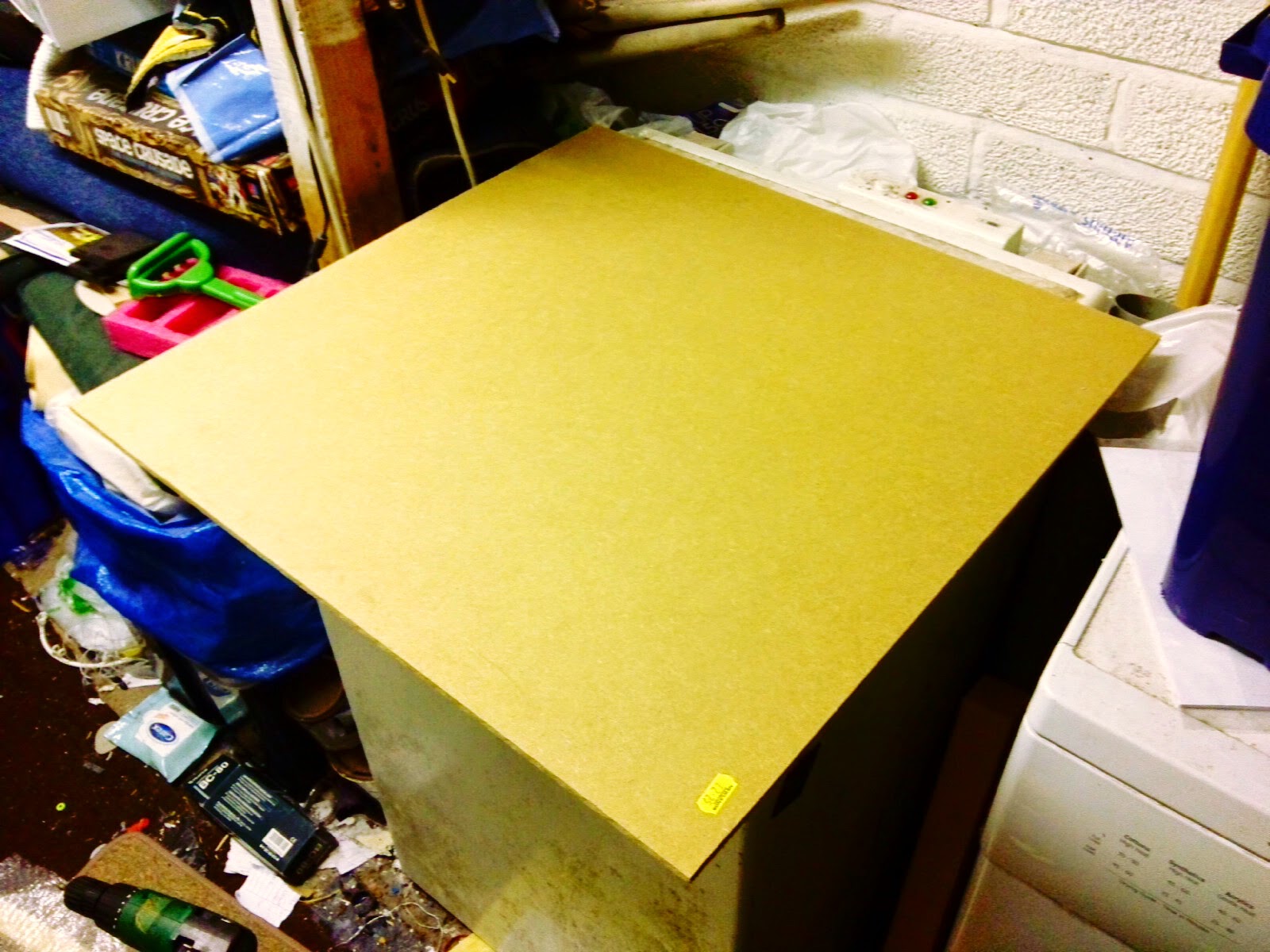 And this is how we stand after 2.5 hours, doesn't seem much really considering I completed my last board in about that time but 'measuring twice and cutting once' is a little more time consuming. Going to have to find a way to tidy up those edges. 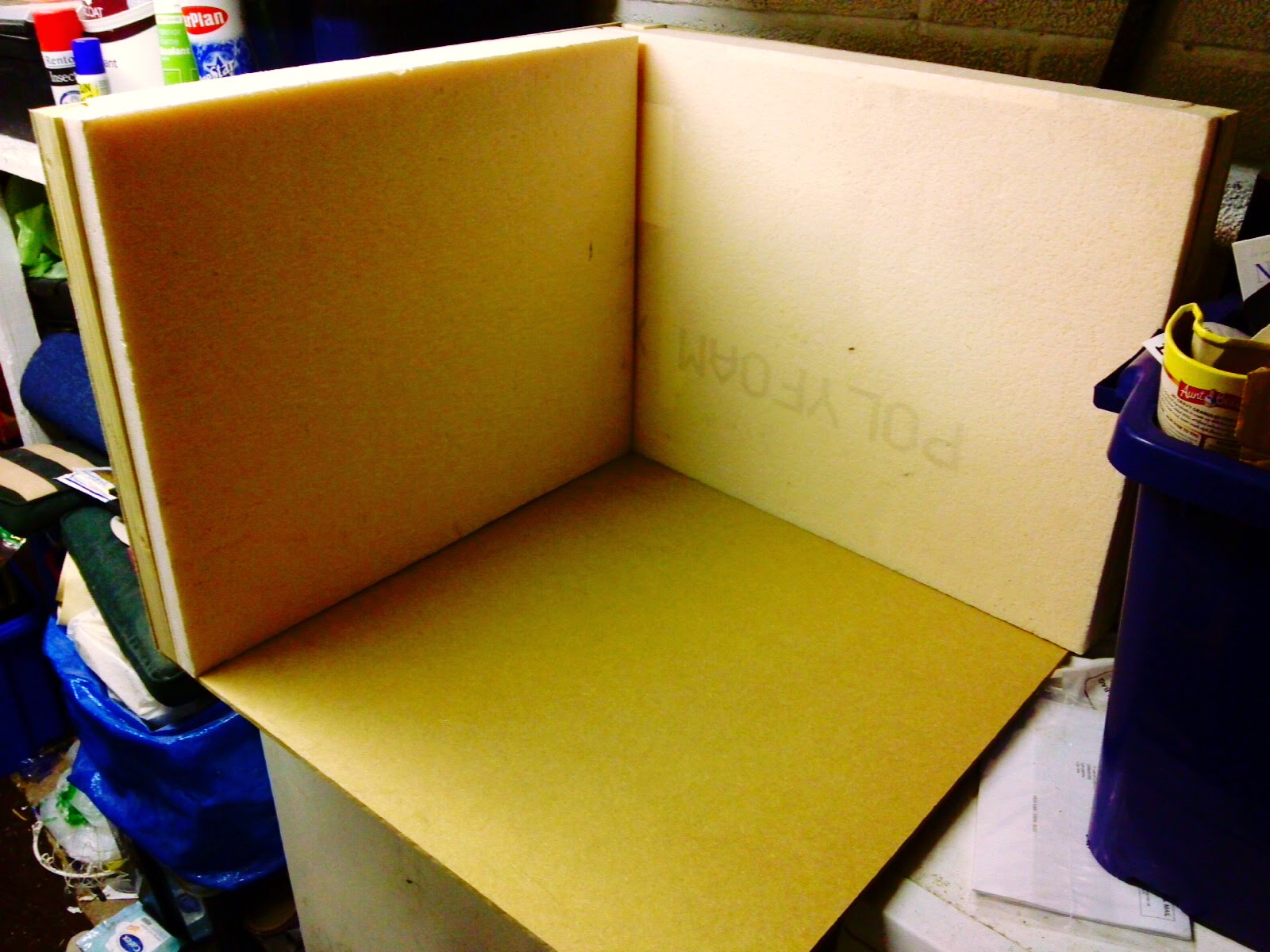 And to allow your imagination to run wild, this is sort of where I'm going, lets remind ourselves of my brother's Vivarium. These [never before seen] pictures show what happened when I added some green to the stone to represent slime from rain fall. 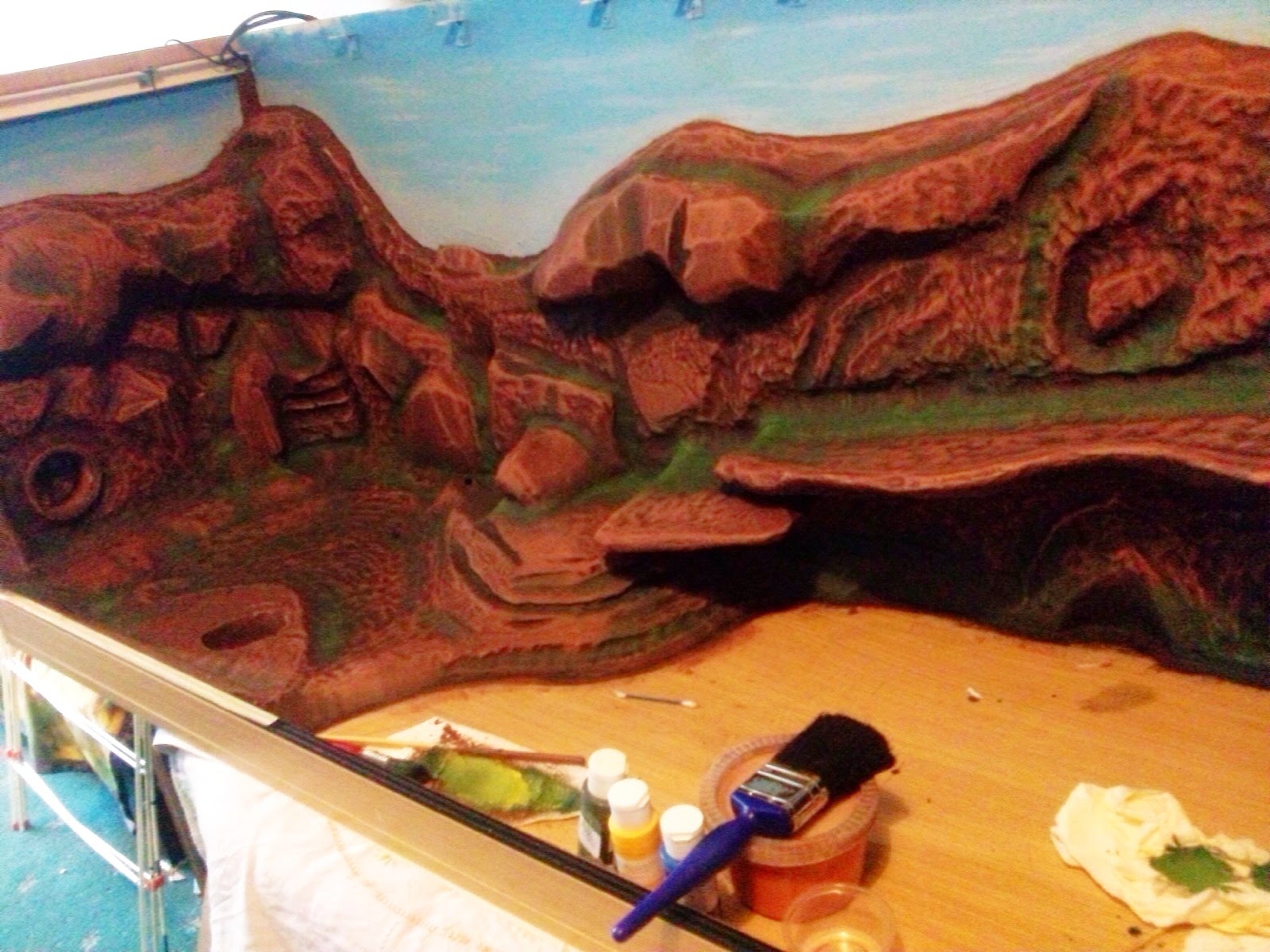 It worked really well, although there's no Chlorophyll on Ferron Proxima so I'm not sure what to do painting wise, yellow would look very odd as people won't be able to process what it actually is as the visual reference wouldn't fit what they see on Earth. 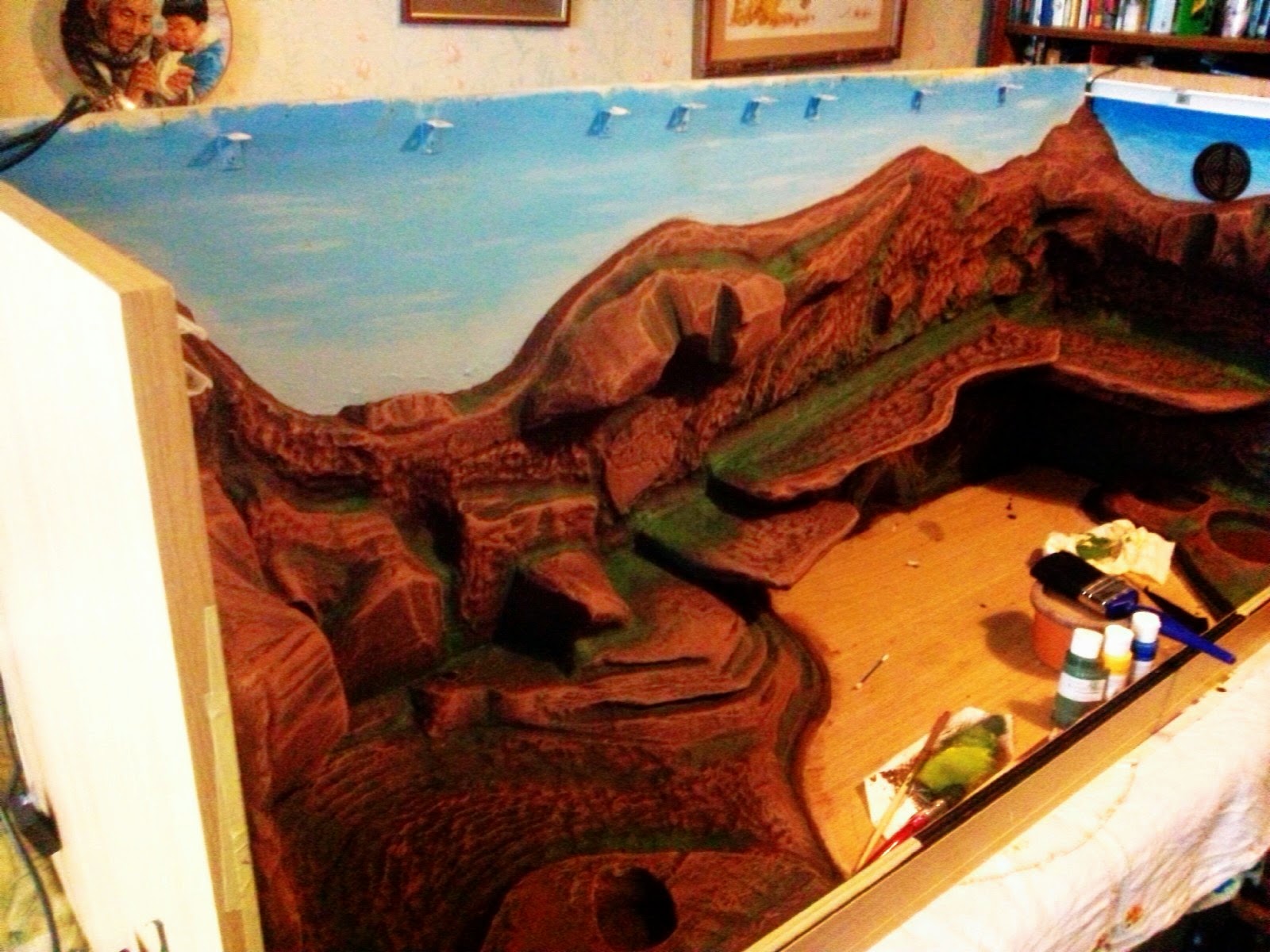 However, it ended up nice. 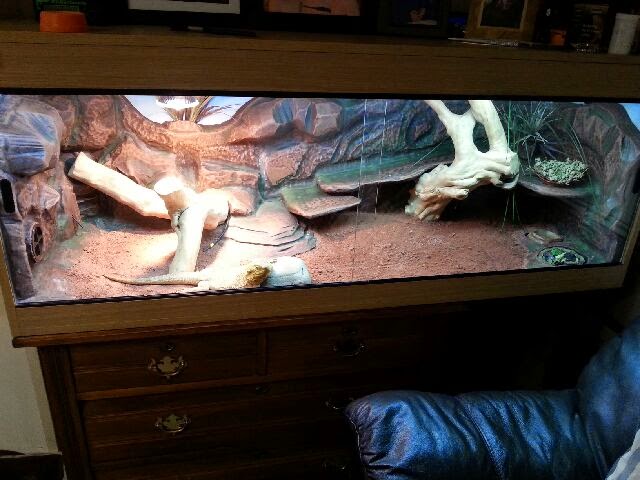 And the lizard approves, it's laid 102 eggs so far, in four clutches, so it must be happy. 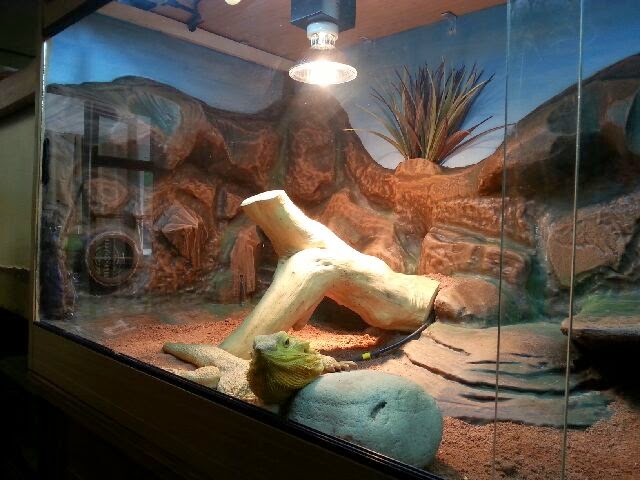 I'll be undertaking a whole host of other terrain element while building the board. I'm hoping to make many elements removable, taking inspiration from Grubnards Swamp Table over at the Mandulian Chapel. 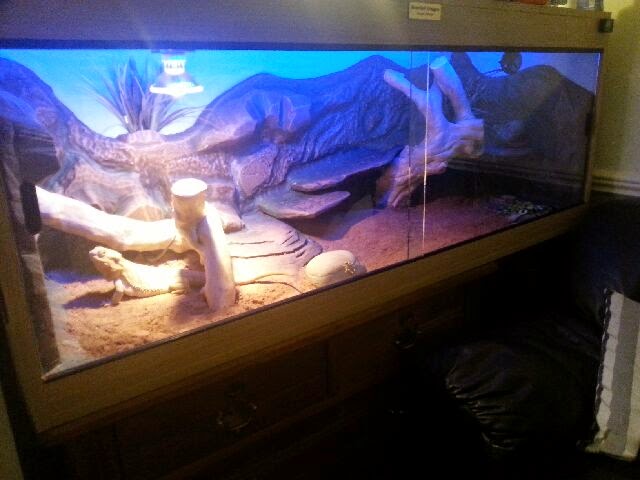 This will  both make it easier to store/transport and allow me to reuse the terrain components should I ever run a game in my own house! It is considerably more challenging for me to do this though as I'll have to work out the attachment mechanisms - lots of magnets, maybe some lego. 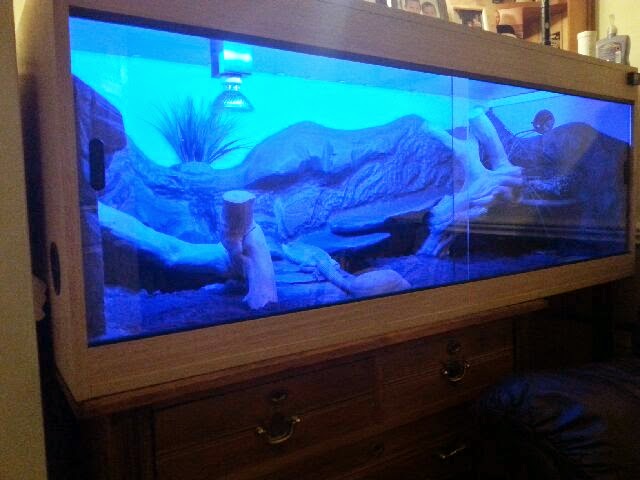 Each item will be a mini project in it's own right which means once I've finished the board itself all these other elements can be added piecemeal so any that fail to be finished will not jeopardize the whole. Hope that's whetted your appetite, obviously my last post was a bit 'down' clearly this seems a little contradictory to that but I'll be blogging as and when I can.