What happened here was quite amusing, Ben asked me for a game, proper 7th at 1500pts and I combined a detachment with nid allies so I could get twin flyrants, two Tervigons, one an allied HQ, the other a troop. A Venomthrope, Zoanthrope and brood of 3 Hive Guard. A Dakkafex, Biovore and 30 gaunts plus another 10 for the Allied contingent. The big point being I had ZERO fortifications, no Aegis, Bastion, Weapons Batteries or Skyshield


The low down:
Of course the problem I immediately had is Ben was not using the Orks I thought he would take, given they have a fresh Codex, no he went for a slightly more mature Astra Imperial Milatarum Guard. And I could see straight from the get go I was stuffed. An Aegis and a bastion with VSG [yeah, I can't touch them], two Leman Russ [can't touch them], two Wyverns [they'll punish my blobs], Ratling Snipers [bye, bye Tervigons] a Quad Gun and an Icarus [bye, by Flyrants] 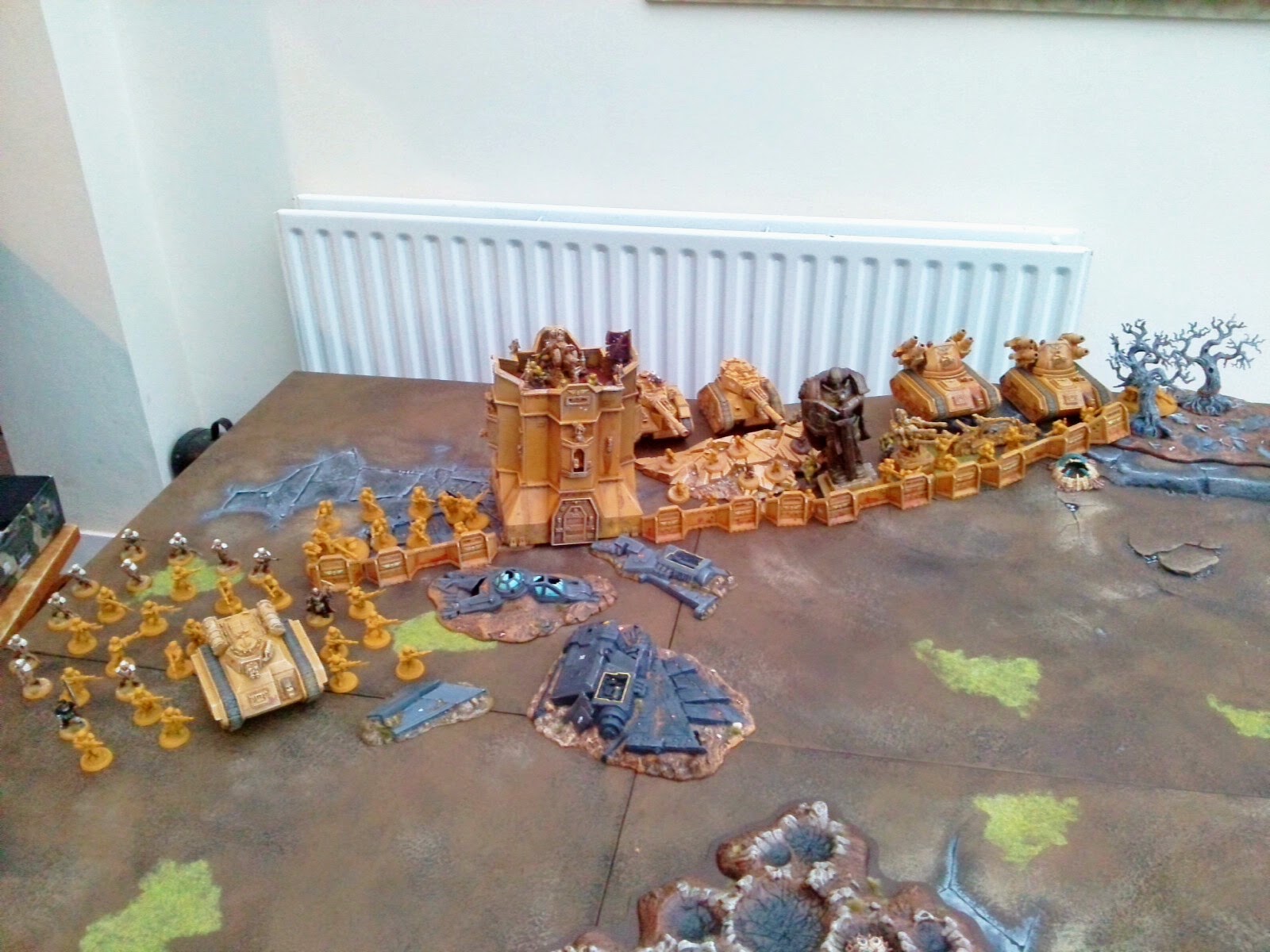 Cover was sparse but I deployed my termagants in such a way to be Shrouded by the Venomthrope and give cover to anything else but with the Hellhound Chimera variant with the Inferno Cannon, cover [or lack thereof] is petty much moot anyway 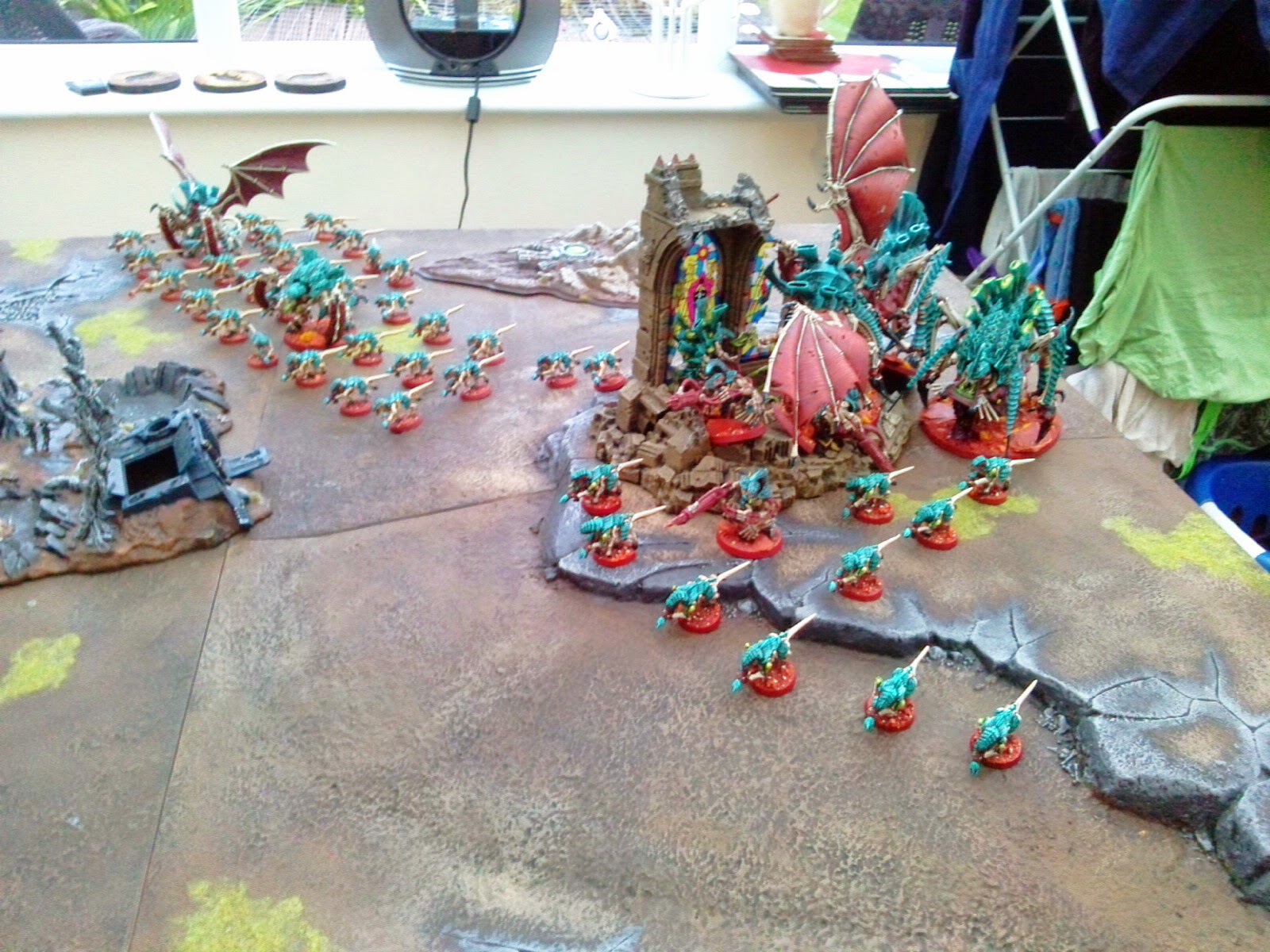 Interesting to note that objectives are now positioned before Deployment setup is rolled, so you put the objectives on the board and then you could deploy in a completely different way than you anticipated. That means you have to be quite generic in where you put them. I placed mine in the Chapel ruin and the crater field in the middle. Ben put his in the blasted forest and just in front of his Aegis at the top. 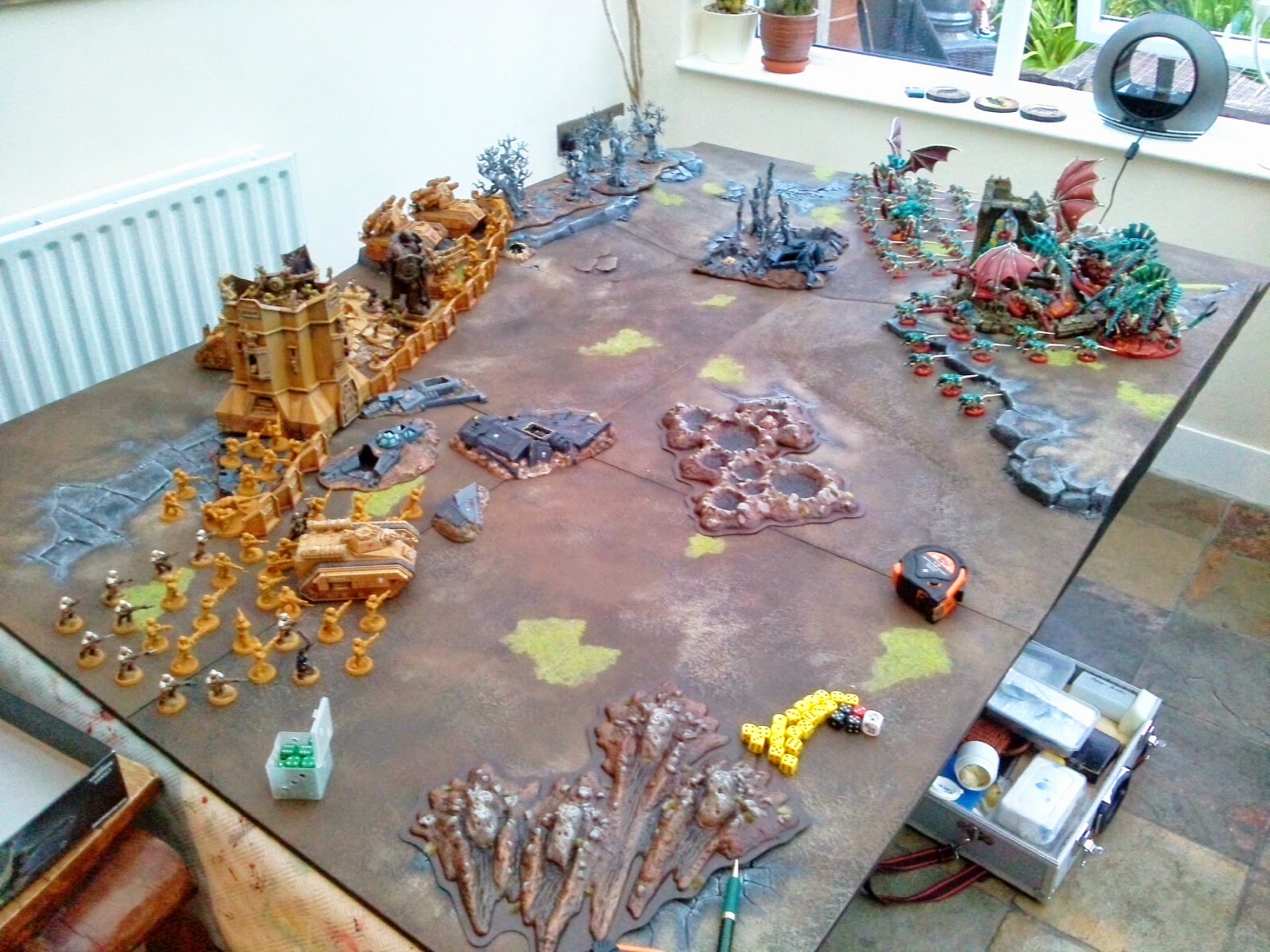 First up Ben rolls to see what the Crashed Aquila Lander has in store, oh some ancient Achaeotech that is a 1VP objective within 3" of the lander, thank you, he'll have that behind the Aegis on the left of the Bastion. Everything else moves forward and the Torrent on that Chimera flames a couple of Gaunts, now that's unpleasant. A lot of shooting focuses on my Hive Guard and 3 wounds get stripped off quite quick, despite the Venomthrope. Ratlings got an 'ignore cover' order but there was also re-rolls to hit and wound from some banner/wargear. 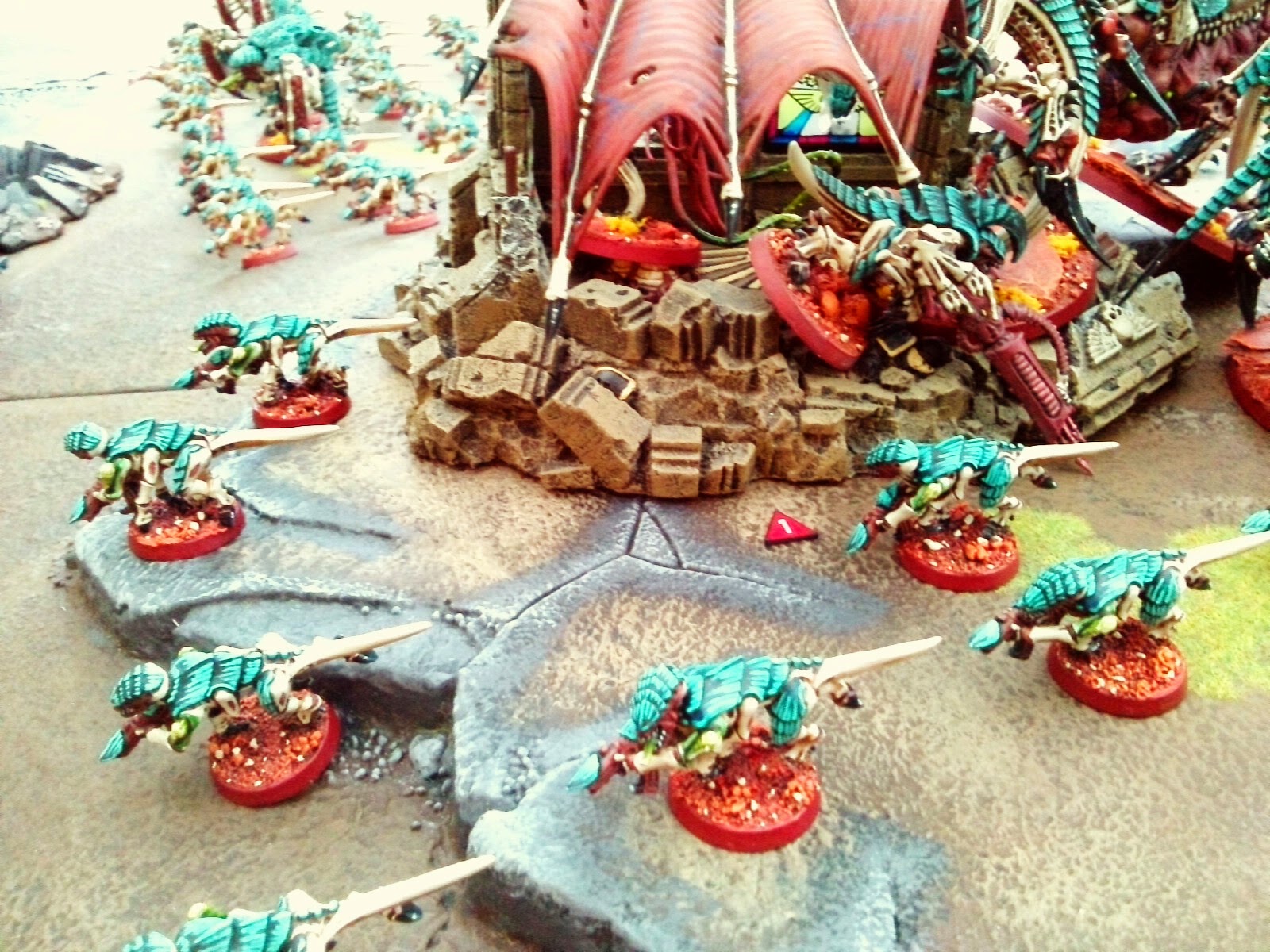 Further fire took the remaining three wounds off the Hive Guard for First Blood, but more importantly removing my 'anti-tank'. We also roll to see what my Mysterious objective is - Sabotaged! We then spend the game regularly forgetting to see if it blows up. 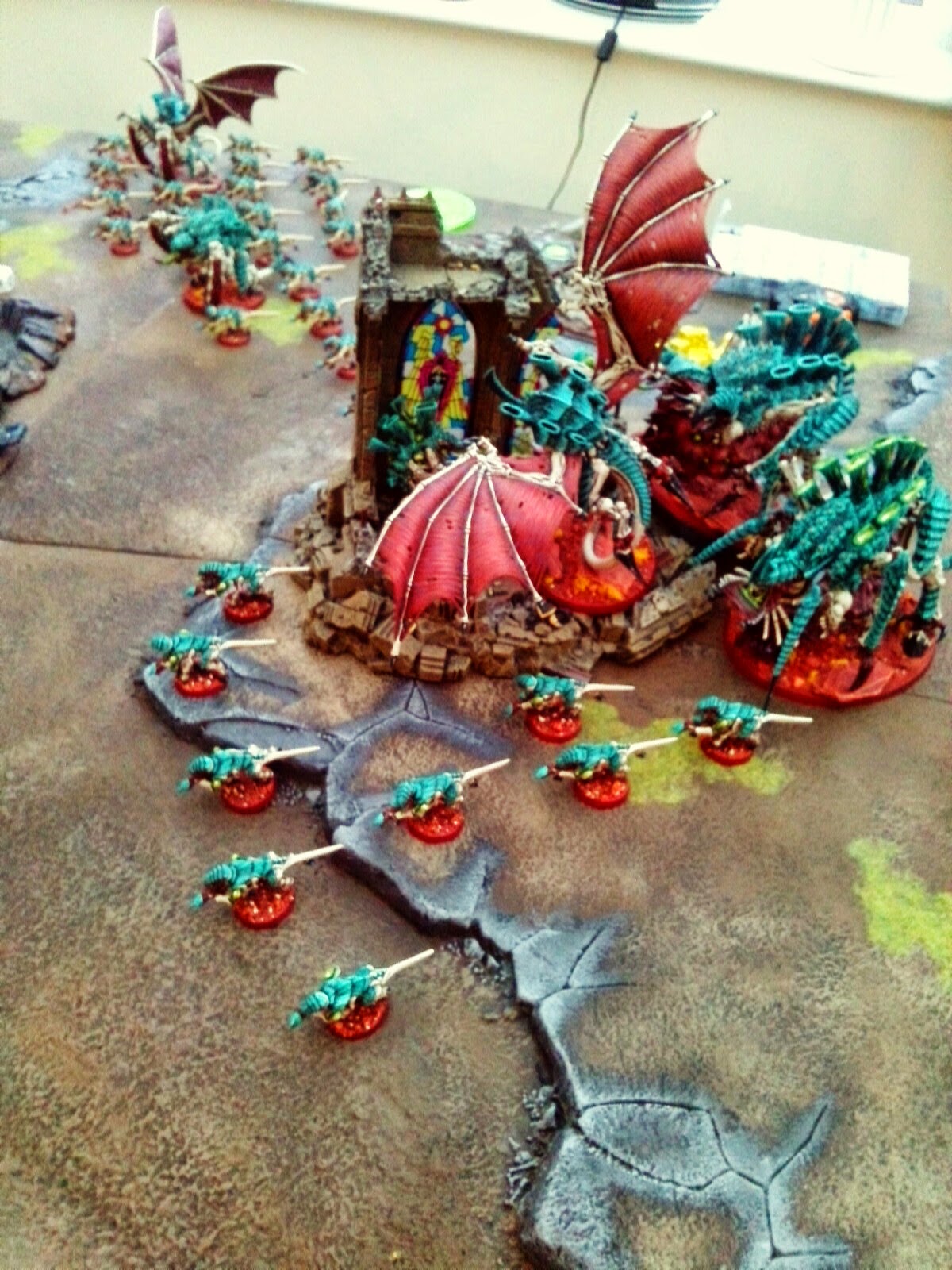 The Great Maw spawns out on 10 Termagants, which head for the crater field for some cover. unfortunately their run move is pathetic and they're pretty much dead men walking with that Hellhound nearby, although cover would again have availed them nought. My Flyrant headed to take some shots at the side armour of the Hellhound, but it's AV12 and I had seious doubts about getting three 6's to glance it. Instead I went for the softer option of the Guard blob and trust the Great Maw might eventually get it's talons on the Hellhound. I managed to kill only about 5or 6 with my Brainleech which was unrewarding. 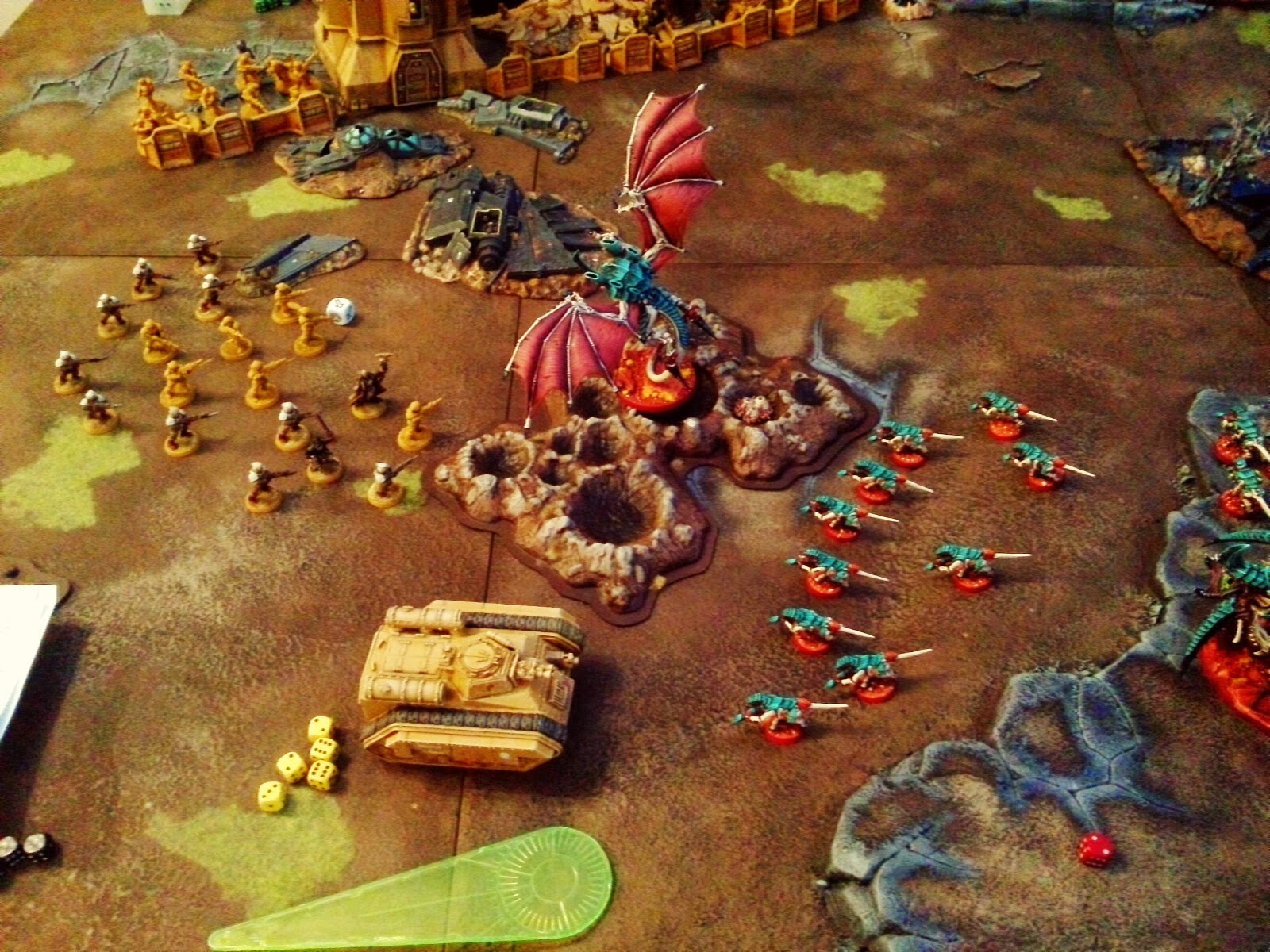 The other Flyrant swooped into cover, I was able to take out a Heavy Weapons team but cover denied most of my shooting. The CC Tervigon spawned out on 11 so no more spawning at all - great! Everything else decamped from the ruins so as not to be blown up by the Sabotaged objective. 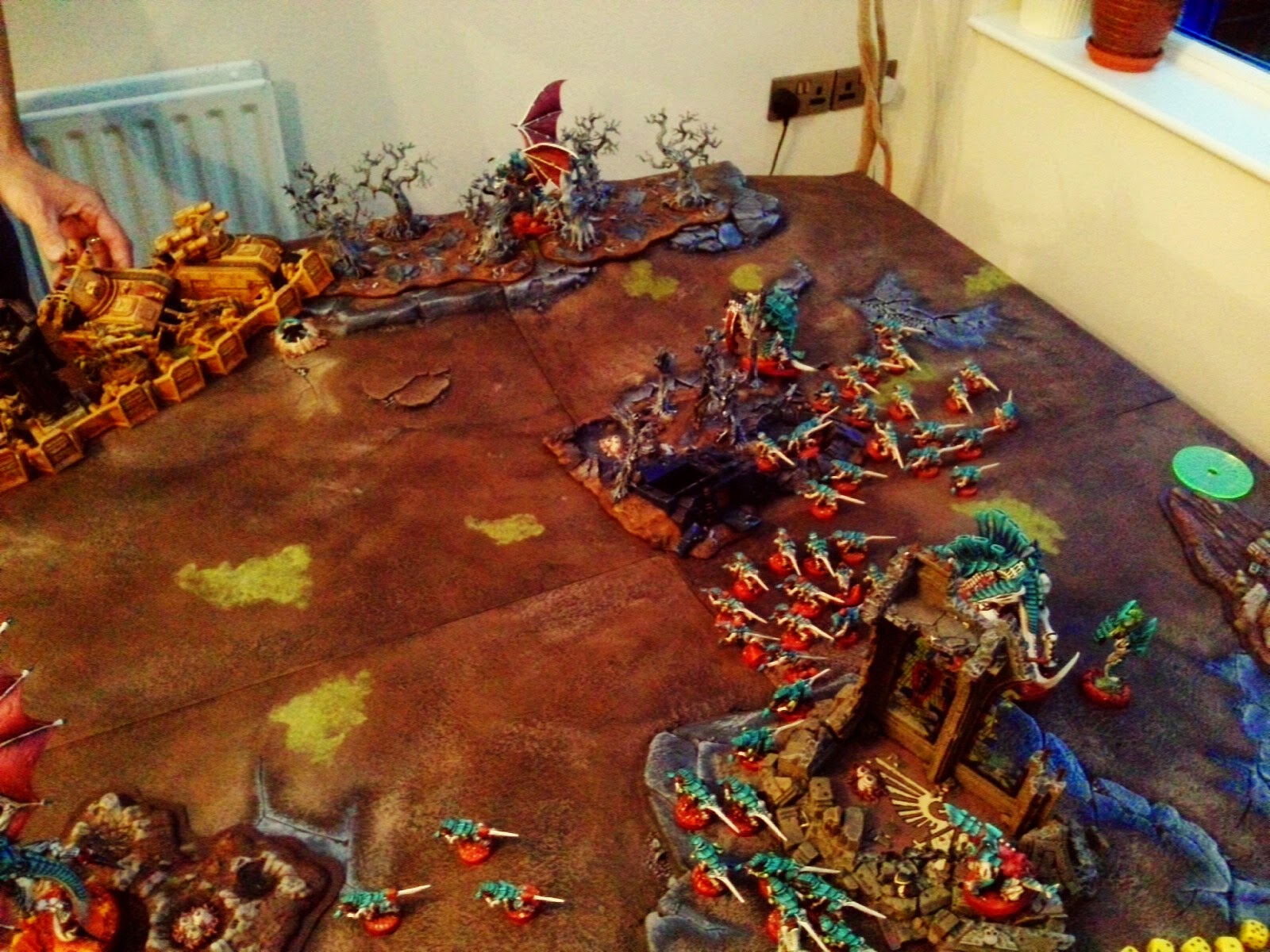 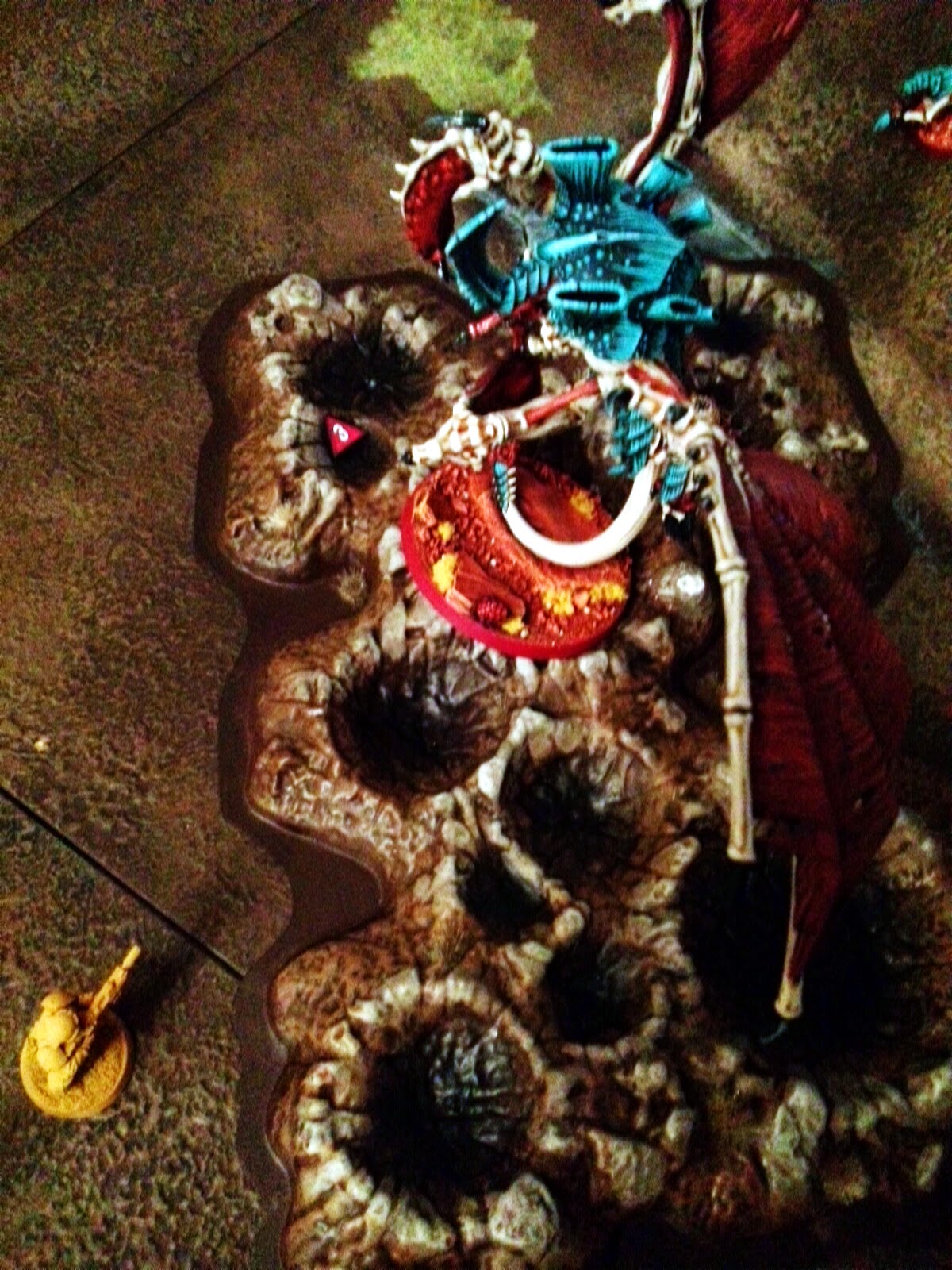 Then a couple more, spawned gaunts also get shot to pieces with just two left. The Second Flyrant in the woods at the top is wounded and falls out of the sky and takes a 2nd wound. 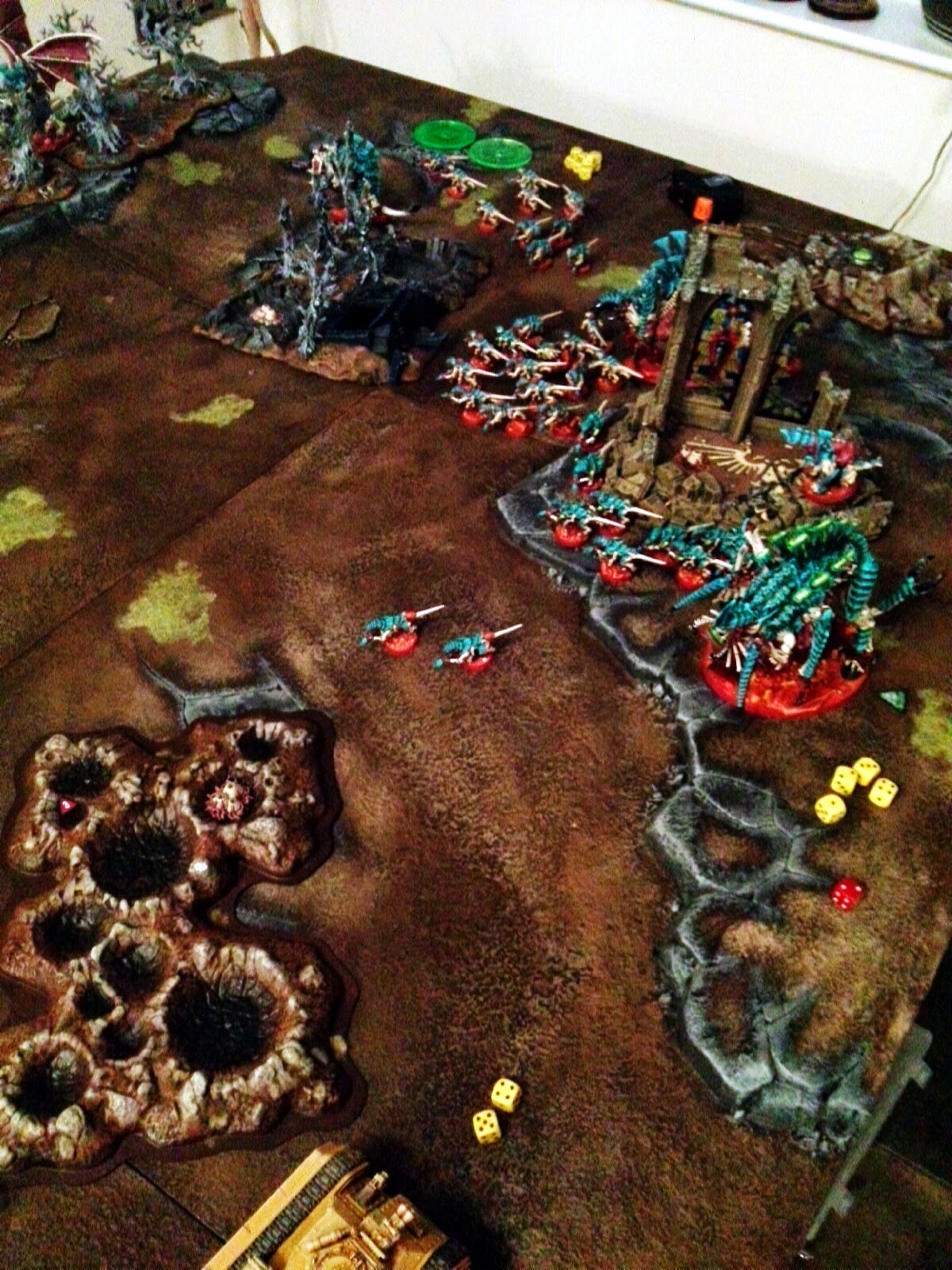 In my turn two I bolster the two spawned gaunts with the eight remaining from my allied brood. The Great Maw heads for the Hellhound, needing an 8" charge, it manages 5" so fails it's assault. 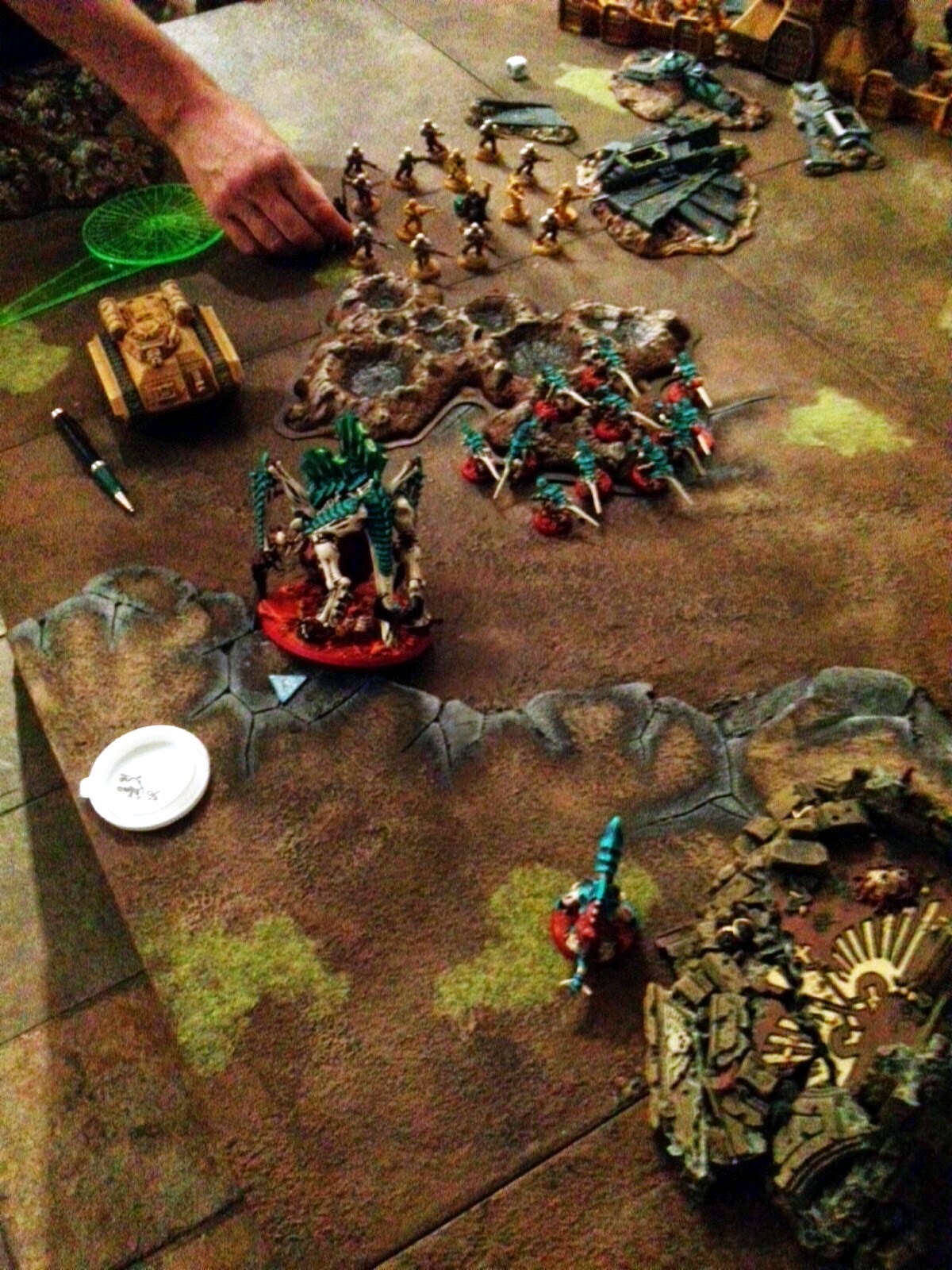 My second flyrant Vector Strikes the lead Wyvern. I get a pen and the tank cannot shoot or move next turn. I shoot the back of the second Wyvern, I glance and pen but only prevent it shooting next turn. 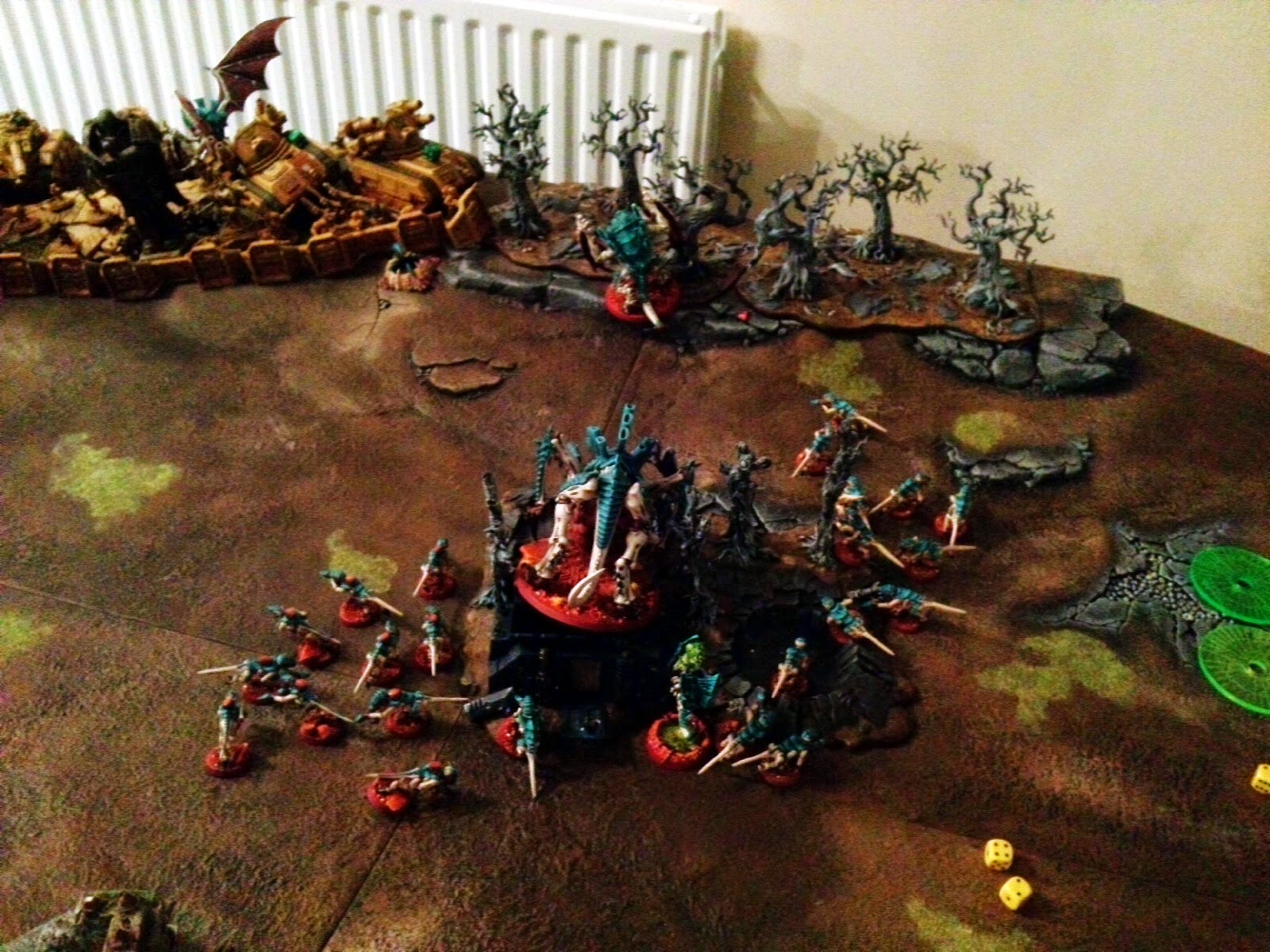 The Dakkafex follows up too but I'm not sure what it did this turn as nothing else dies. He had Onslaught so he was run and shoot, maybe saving throws were very effective? More importantly though with that Grav Wave generator in front of the units and cover I can't charge the distance to get into assault. 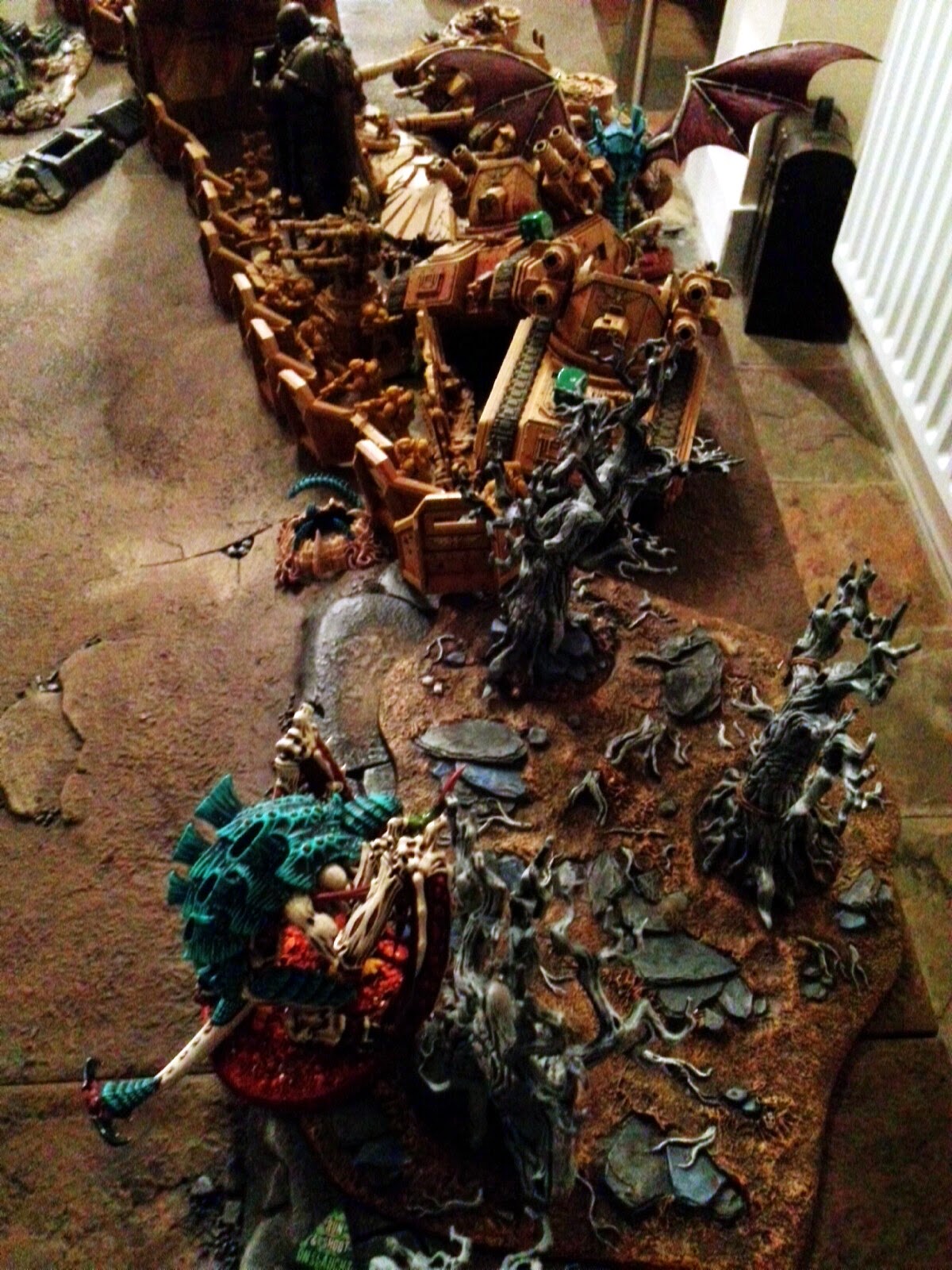 The Nephropid captures an objective, only to discover, unsurprisingly, that it is also Sabotaged! 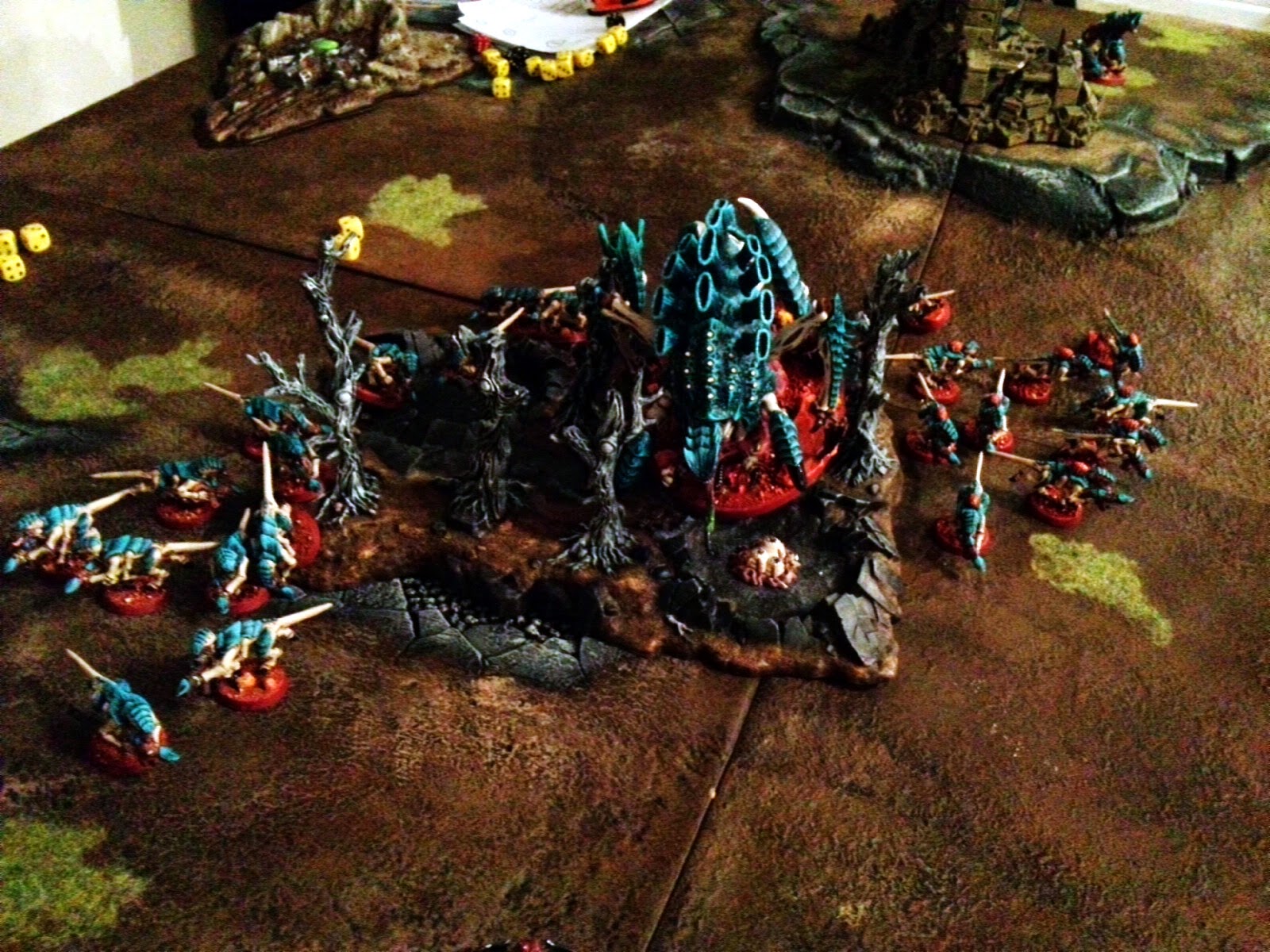 Anti-air trains it's sights on the Flyrant... 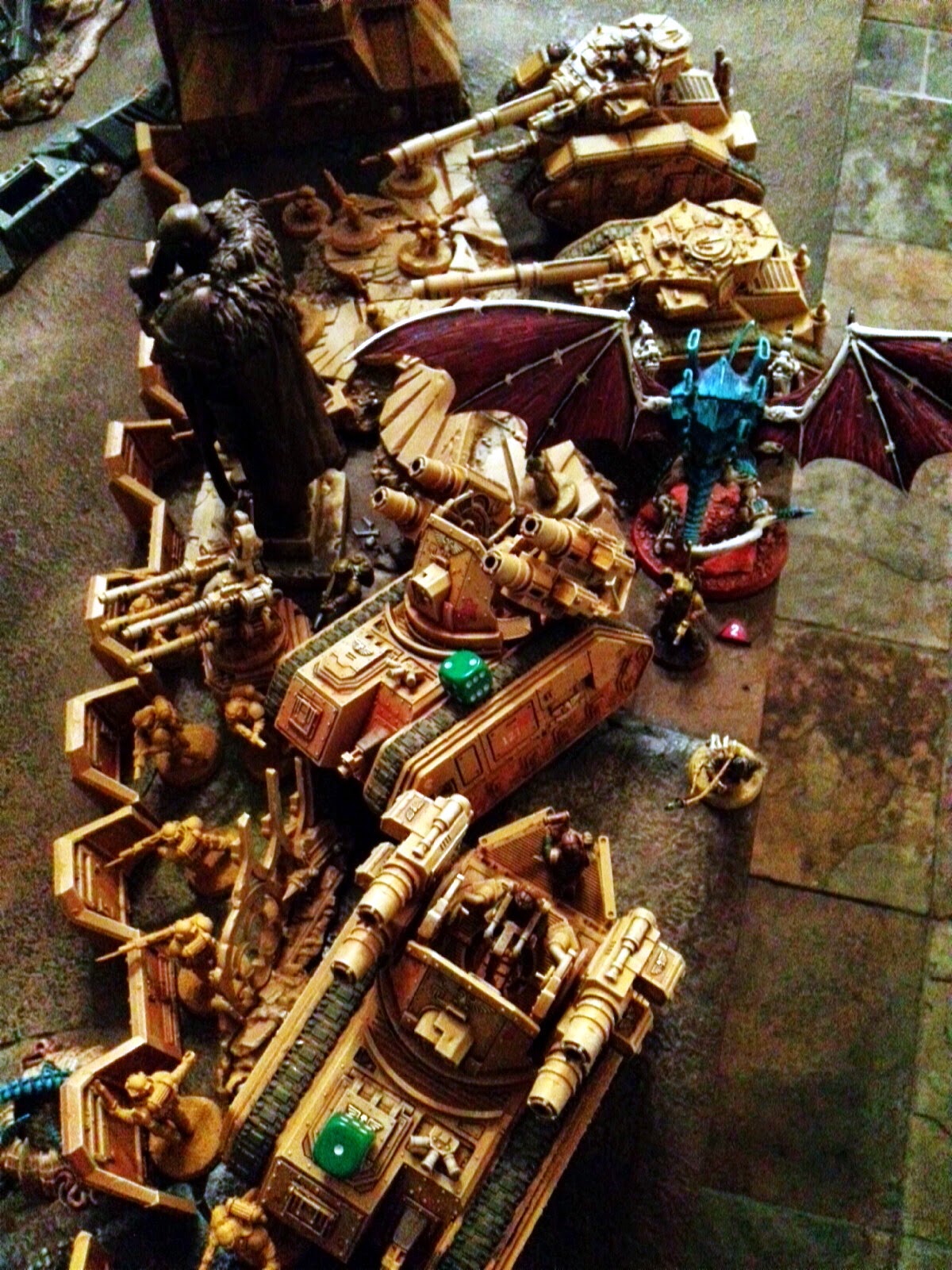 ...and shoots it to pieces. 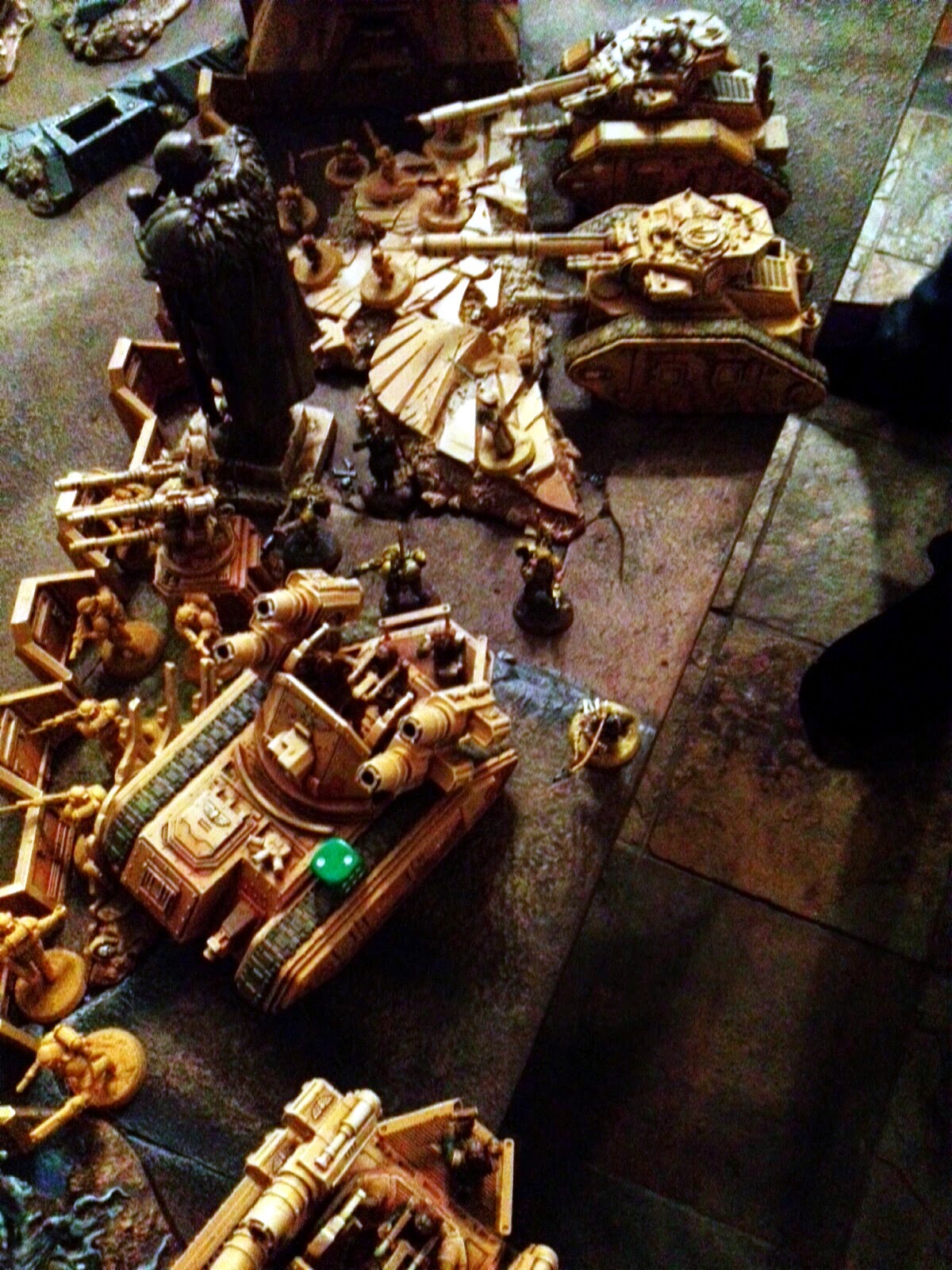 With space to manoeuvre the Hellhound reverses from the oncoming Great Maw. Concentrated fire puts five wounds on it. 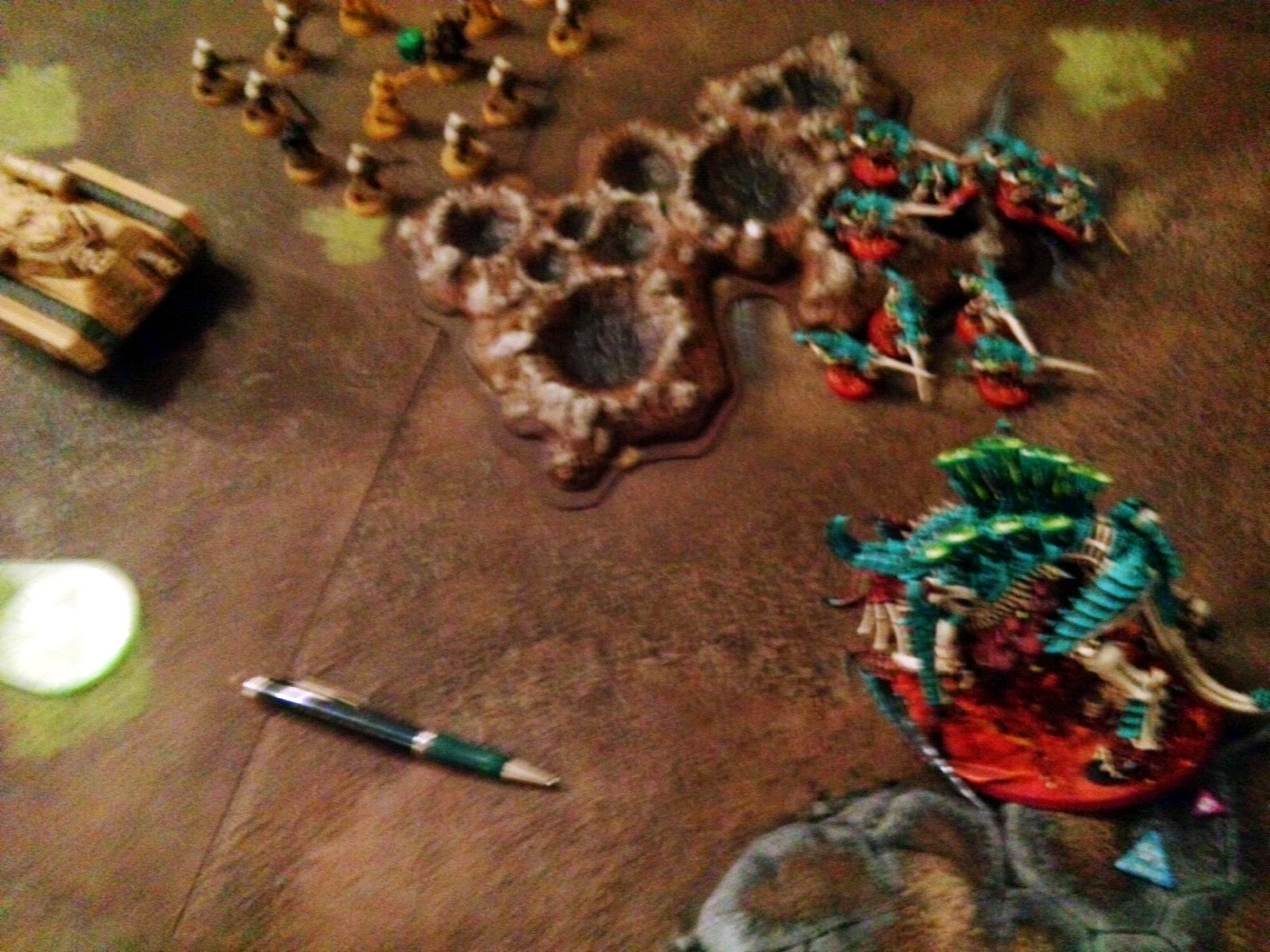 But it takes pretty much all the remaining fire for the kill shot. I immediately 'go to ground' with the nearby gaunts. You don't get a cover save from the Brood Progenitor backlash but it will help next turn because they will be immune to Instinctive Behaviour. Ben thinks this is a dubious tactic, that he could understand them being able to go to ground should he be firing directly at them but they're being hit in a different way. The description is specific that they're being hit as if by a shooting attack from the Tervigon. I think the argument should be that perhaps they should have no right to go to ground because they can derive no benefit, but counter to that you always take your best save anyway so even if they were entitled to a cover save if they had a 4+ save and went to ground in 5+ cover they'd still get 4+. I'm confident I can do it but if anyone want's to chip in their thoughts feel free. 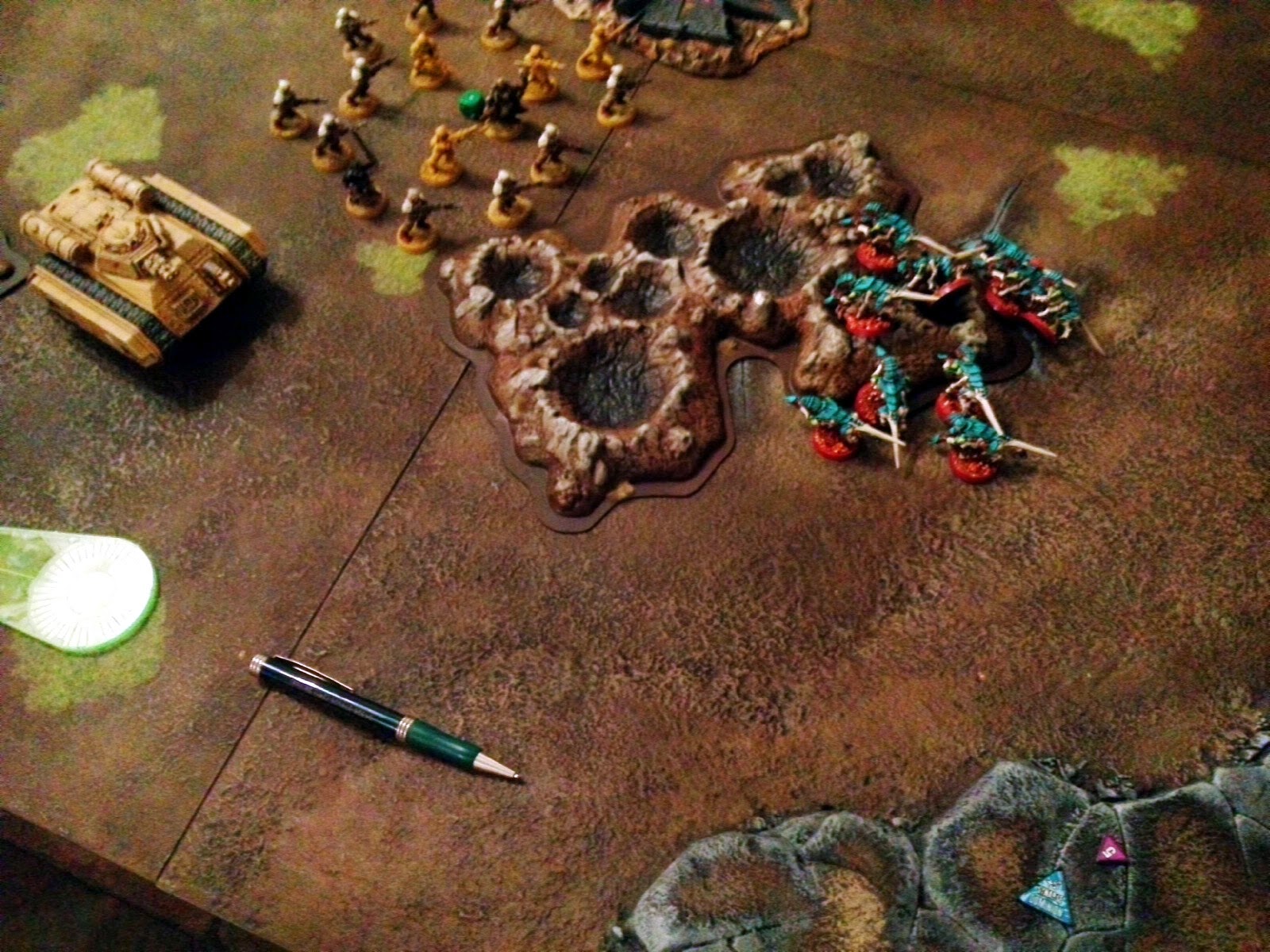 War gets into range of the Wyverns, I actually whoop when I find out they're a squadron so his shooting effects them both. I'd been floundering at the thought one would go and the other would carry on. even so I only manage a few hits. I managed to get a few hits with glances and pens. Ultimately his cover save would stop most of them except one pen gets through. I roll to see damage and on the front Wyvern and get a 6, plus one for open topped and the Wyvern blows. 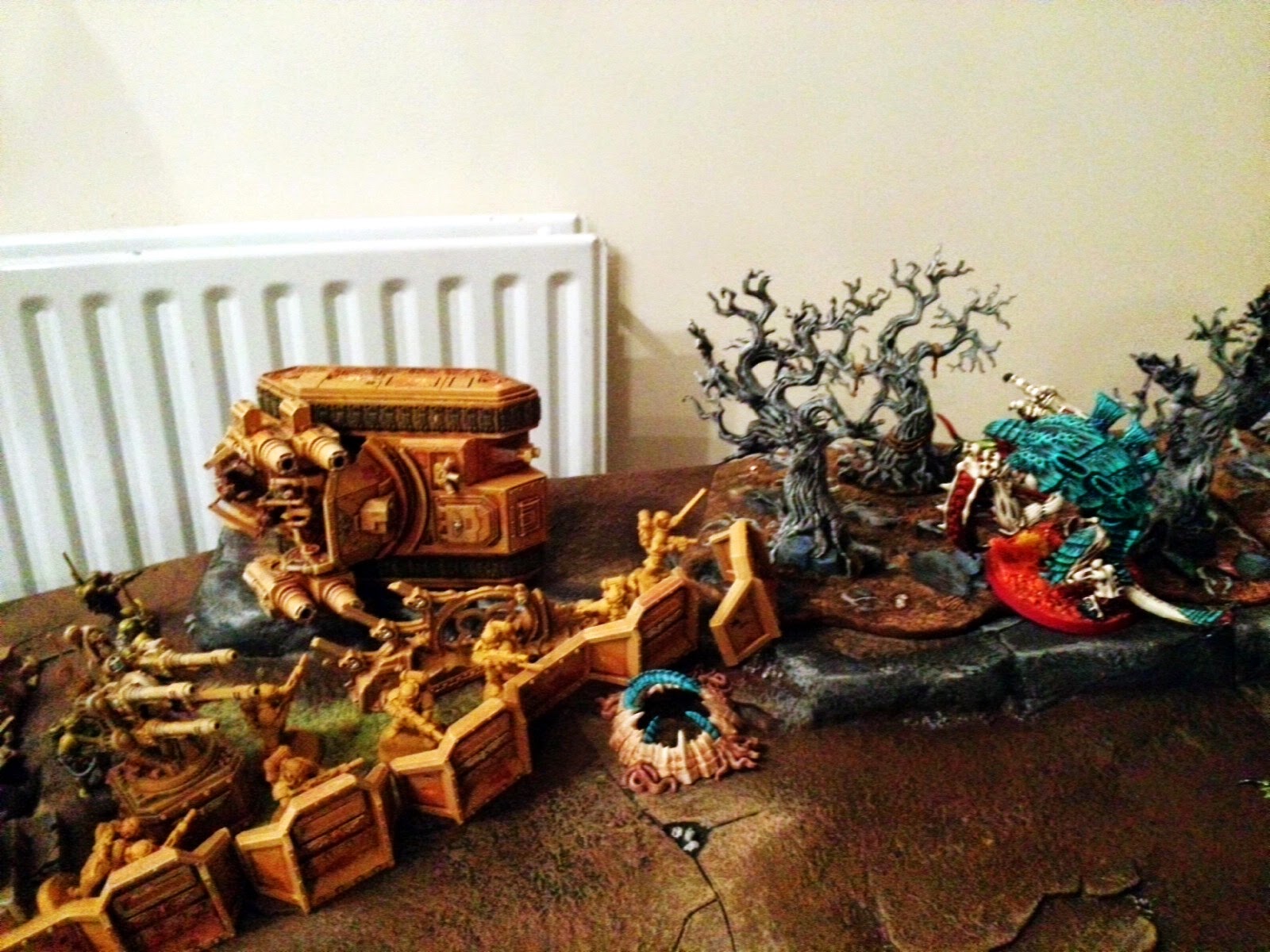 The explosion takes out a couple of Guardsmen and hits his Squadron buddy, I roll and get a glance, wrecking the second Wyvern thanks to it's last Hull Point. Finally some luck! With War on the rampage all the Defenders train their guns on the beast and let rip. 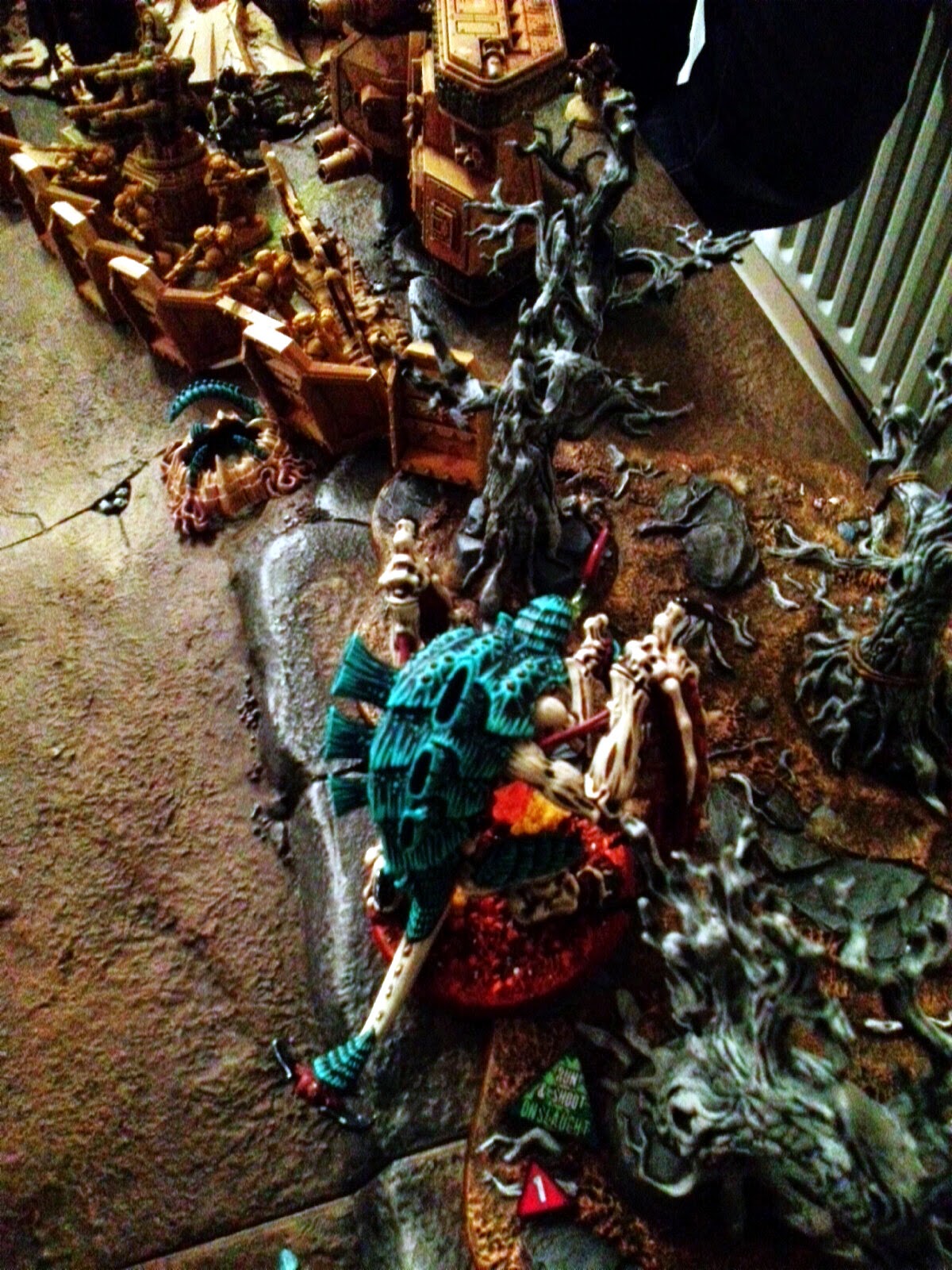 Stripping all four wounds off the behemoth. 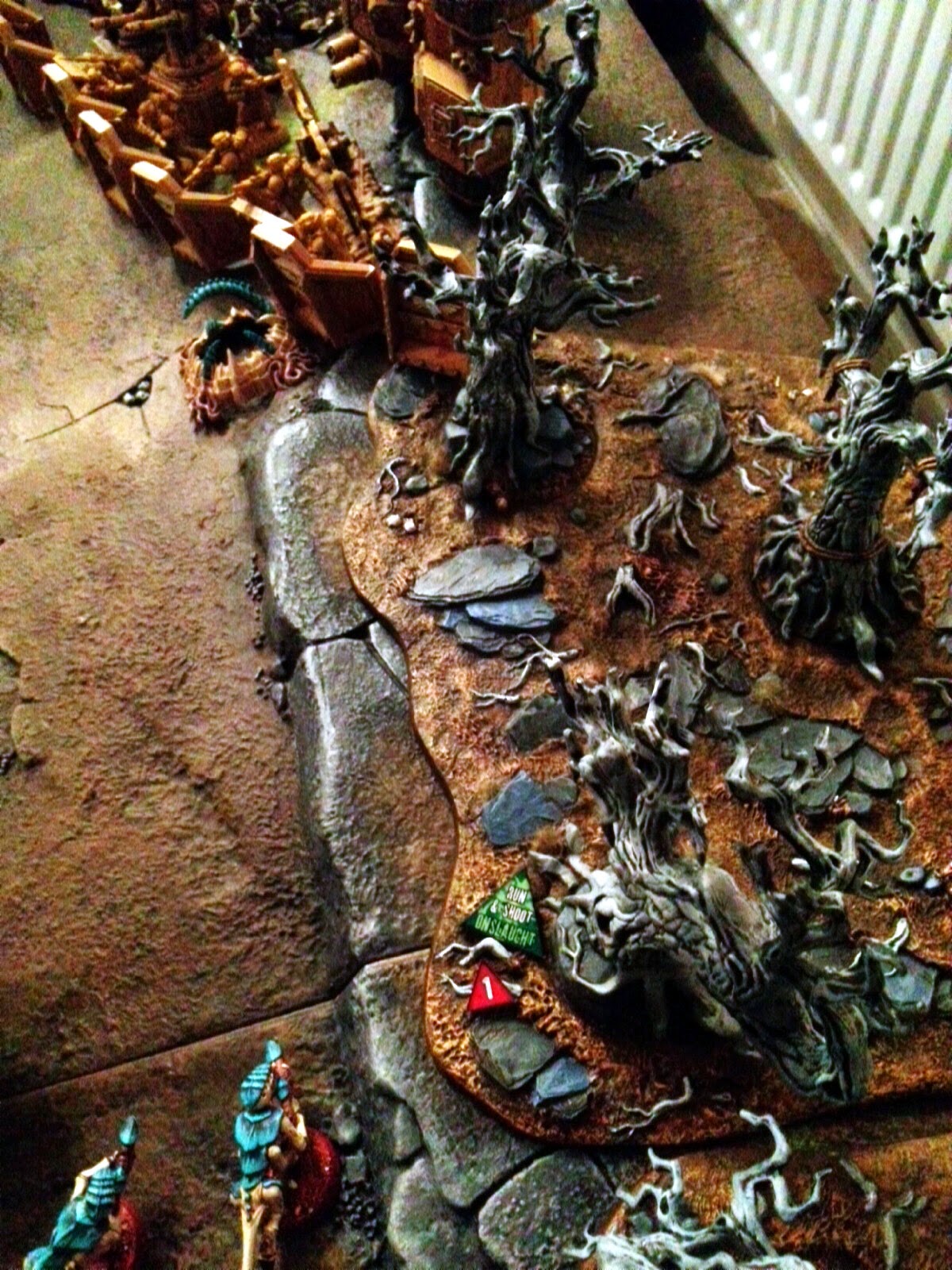 Things are looking dire but I still have a chance to steal this with 3 objectives I can control and the other one I can contest. I head the Tervigon forwards to take fire and shield the Termagants who can contest the Grav Wave objective. 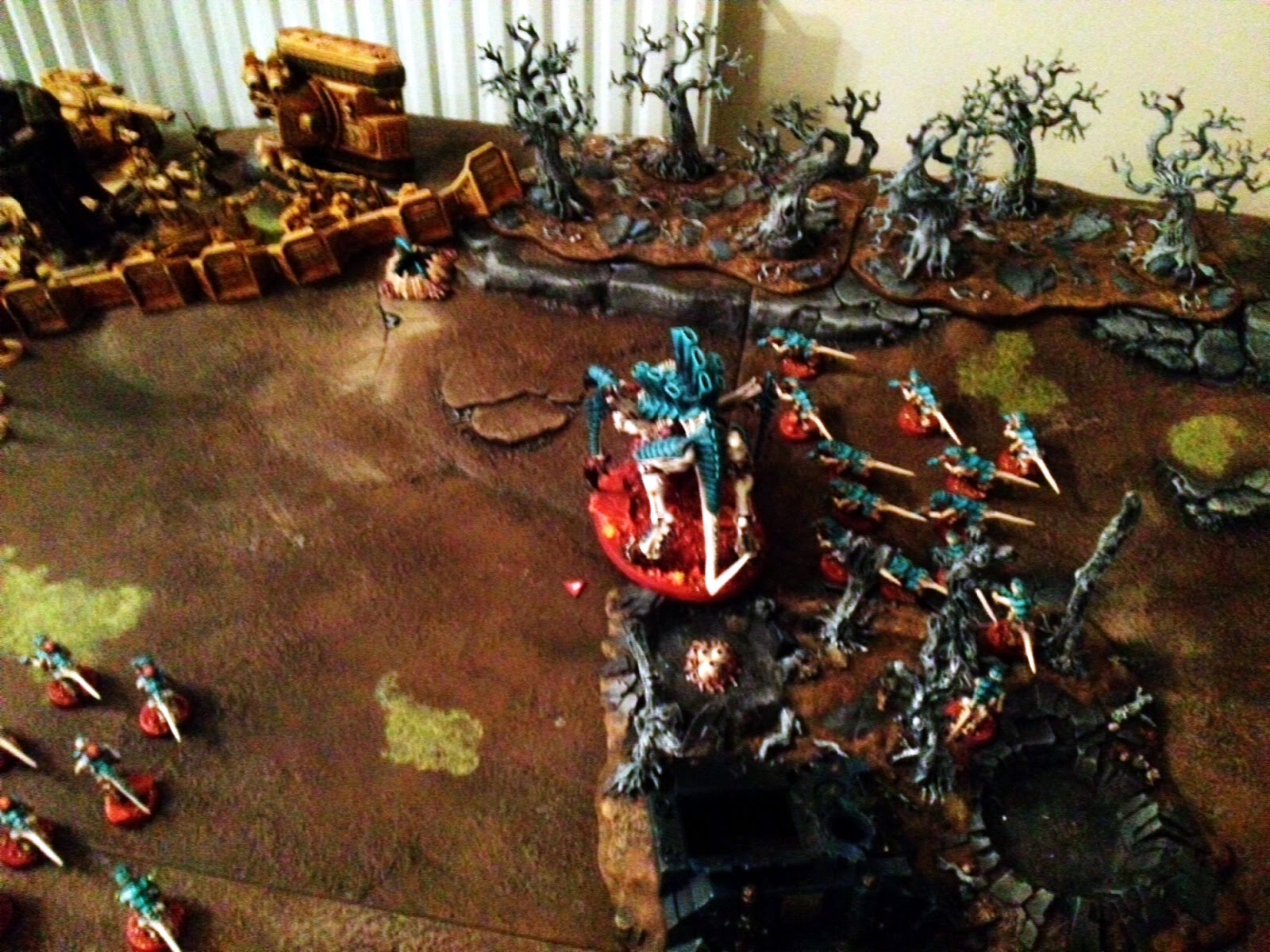 My plan works too well and the Nephropid implodes. 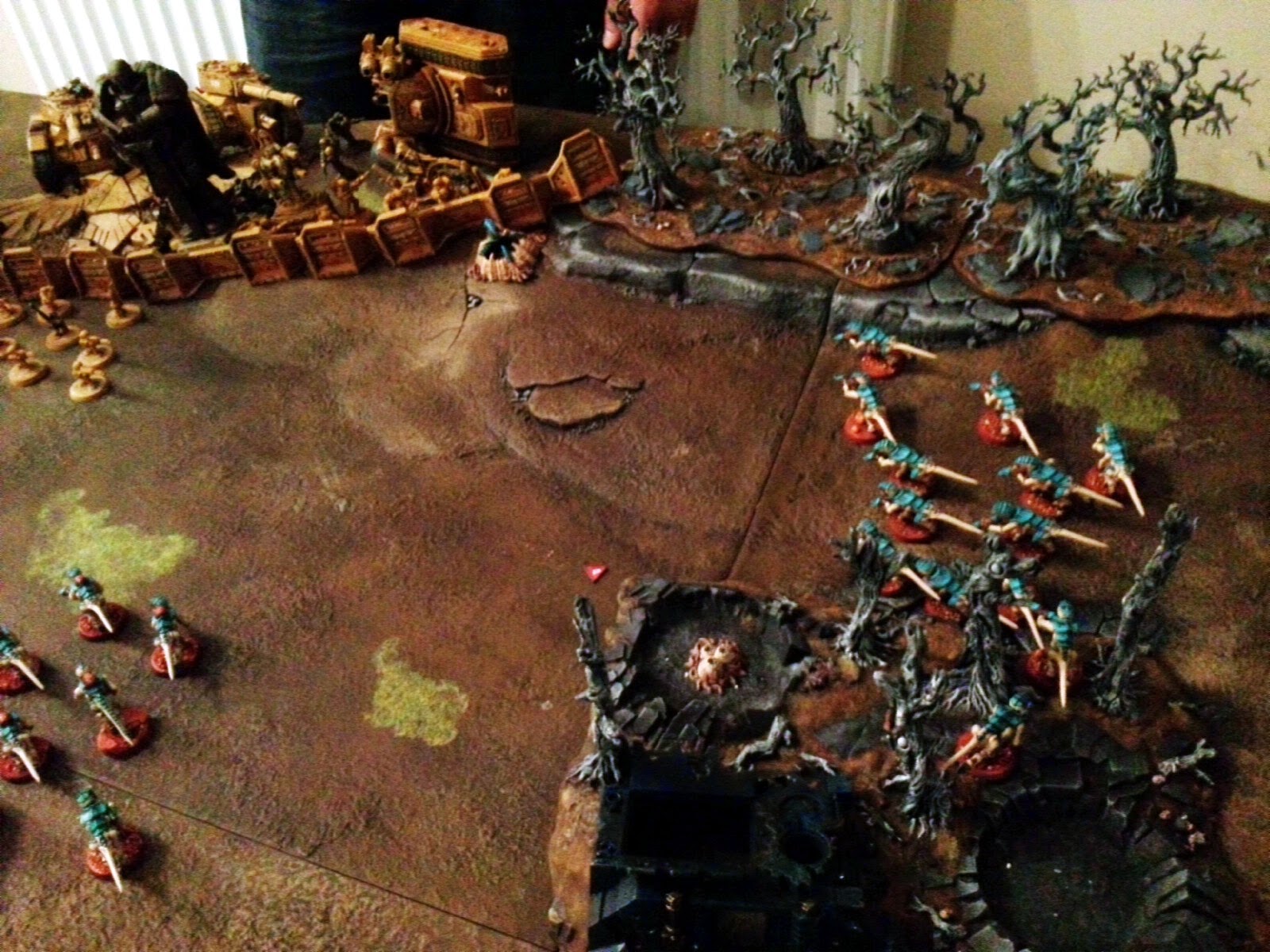 About 5 gaunts die in the synaptic backlash. The other gaunts head to contest the other objective. I'd moved my Zoanthrope across and cast Dominion which kept everything in Synapse and also re-invigorated the gaunts that had gone to ground. 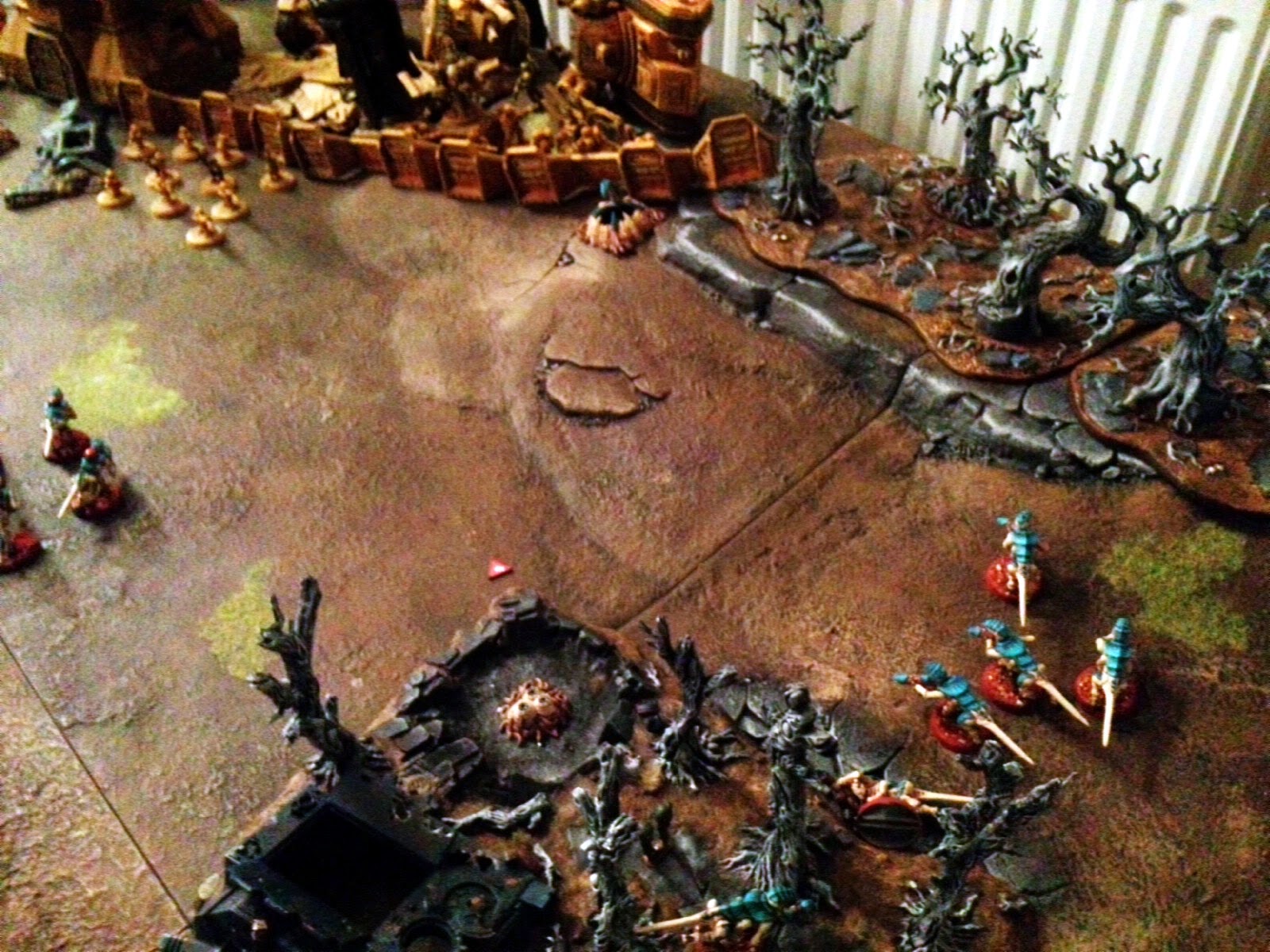 Unfortunately a dozen Termagants is no match for the massed las fire and Inferno Cannon set against it. 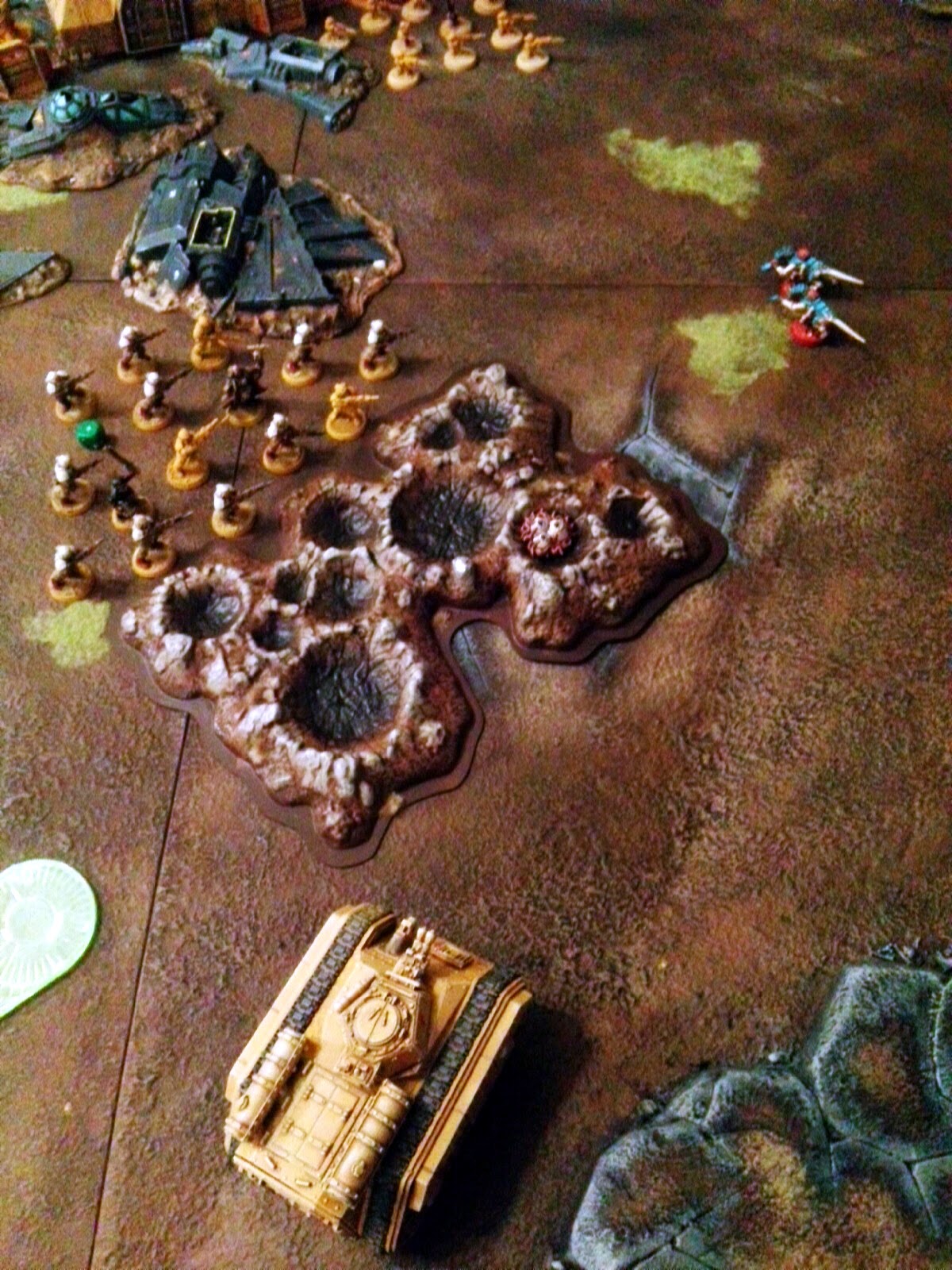 I try to run and contest but can't get more than an inch or two. It's turn four and I think I'm all done. 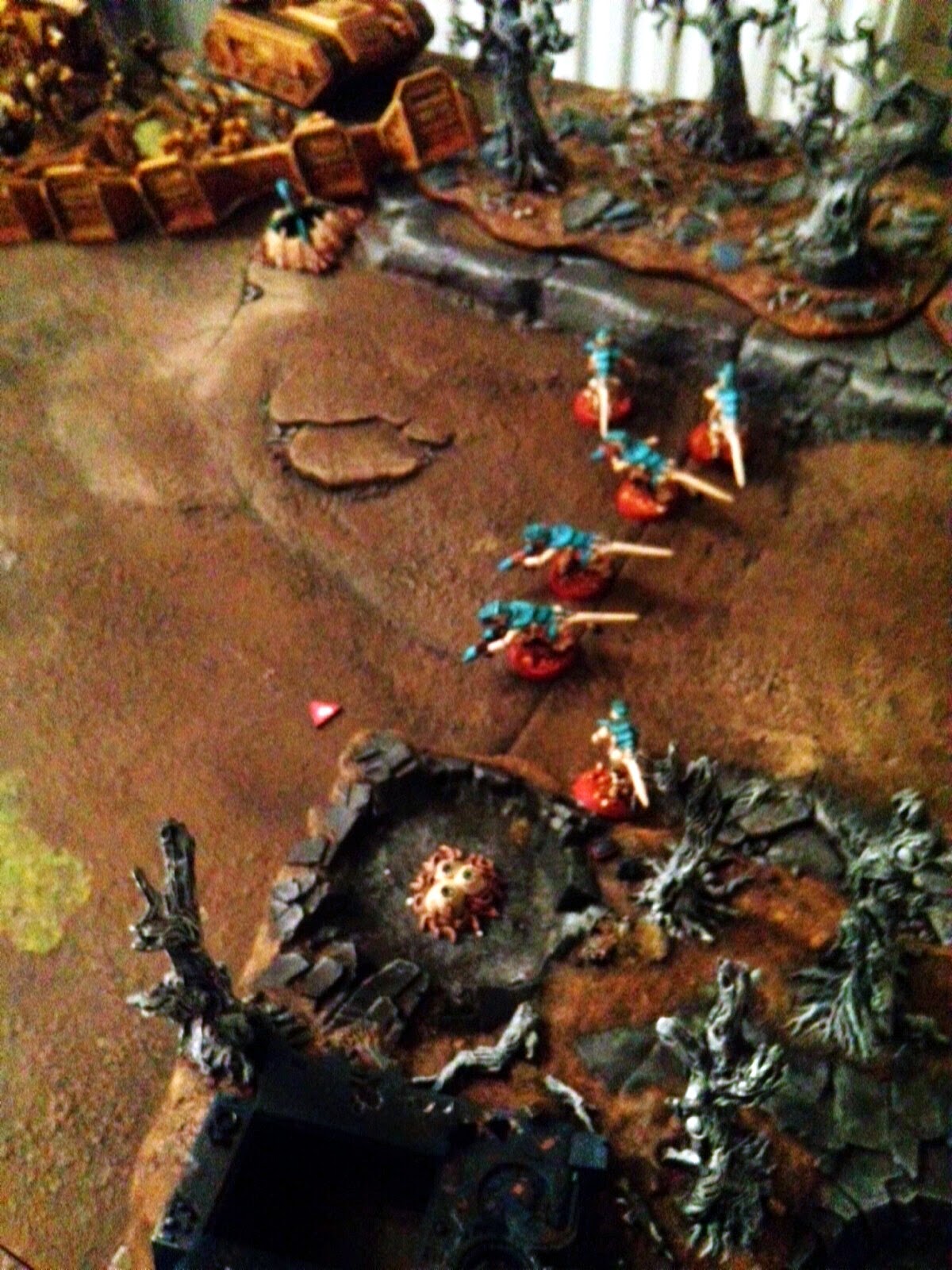 Technically, having called it, this is a Crushing Defeat. I'm actually unhappy about this shift in 7th to levels of victory. Calling it, like I did, seems an amicable acceptance but then to be branded not just defeated but 'crushed', well it's not really in the spirit of the game to me. Anyway, Ben had First Blood, Slay the Warlord, had killed 2 Heavy Support, Archaeotech objective and 1 objective for 8VPs. If we'd gone into 5 turns he would easily roll over the objective in the craters for another three and most likely got Linebreaker too, with the Hellhound, for 12 VPs all in.

Meanwhile I had either 1 or 2 VPs from the Wyverns, I think it's just 1 because they're a squadron and most likely would have had the blasted woods objective and the ruined chapel. That would have got me 7 but would have been dependant on the remaining Termagants not being gunned down by the Aegis Defenders and the Zoanthrope continuing to hold the Chapel and neither being blown up by the sabotaged objectives. This would have net me 7VPs but you can see that despite the monumental losses [and awful dice rolling] I wasn't too far off the mark from Ben. Had a couple of units just survived a bit longer [Catalyst anyone?], or been more effective in their attacks I might not have suffered as many losses and would have been able to snatch it.

The funny thing was that we played on the night Brazil got hammered by Germany so I can't feel too bad, at least it wasn't 7:1 ha, ha!