Final game and Rob has Orks, predominantly bikers but also some Mega Nobs and a Dakkajet and a Mekboy. It transpires we're both on three losses and one win so I point out one of us is likely to go home more disappointed than the other.


The low down:
We choose our objective counters and set up, funnily enough we only occupy the left and middle of tthe battle board, essentially using the righ two feet to store our miniatures and various ephemera. My objectives are between the Skyshield and Bastion, just in front of the Aegis [hidden behind the Great Maw] and the 1pt VP in the ruins with the Hive Guard who are just going to abandon it anyway. 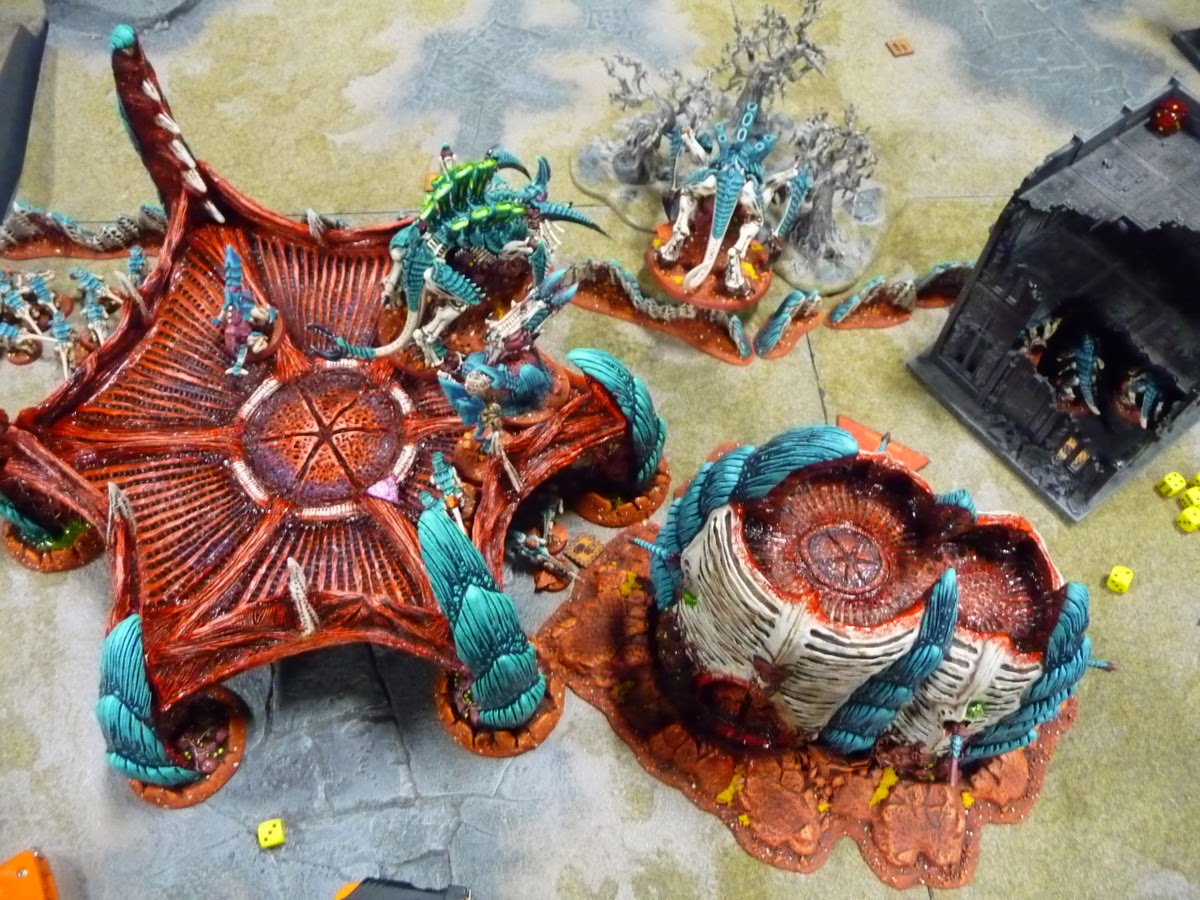 The Great Maw spawns out on turn 1 with just 5 gaunts but that's OK, they can babysit the objective underneath the Skyshield, that gives me 2 in the bag regardless. The 30 strong brood head for the Aegis and the Nephropid crashes into the woods. 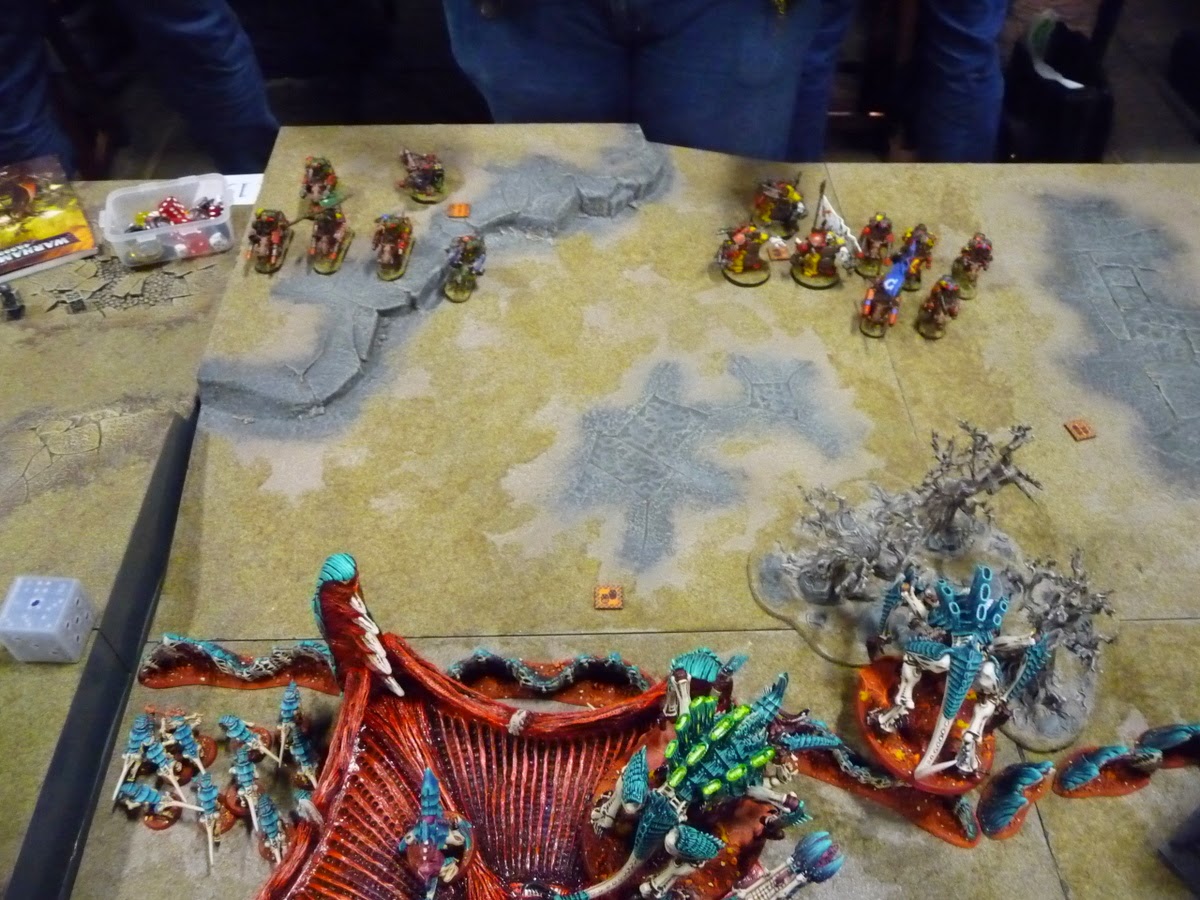 What is missing from this shot was a unit of bikers between Rob's hand and the unit above the ruins. I targetted everything at them, Hive Guard and Flyrant, Biovore and even the Quad Gun and was able to not only kill them for First Blood but ensure there was one less Troops choice in Rob's force to secure the objectives. As an aside I'm struck once again at the lack of cover on this board, good job we were only using two thirds of it! 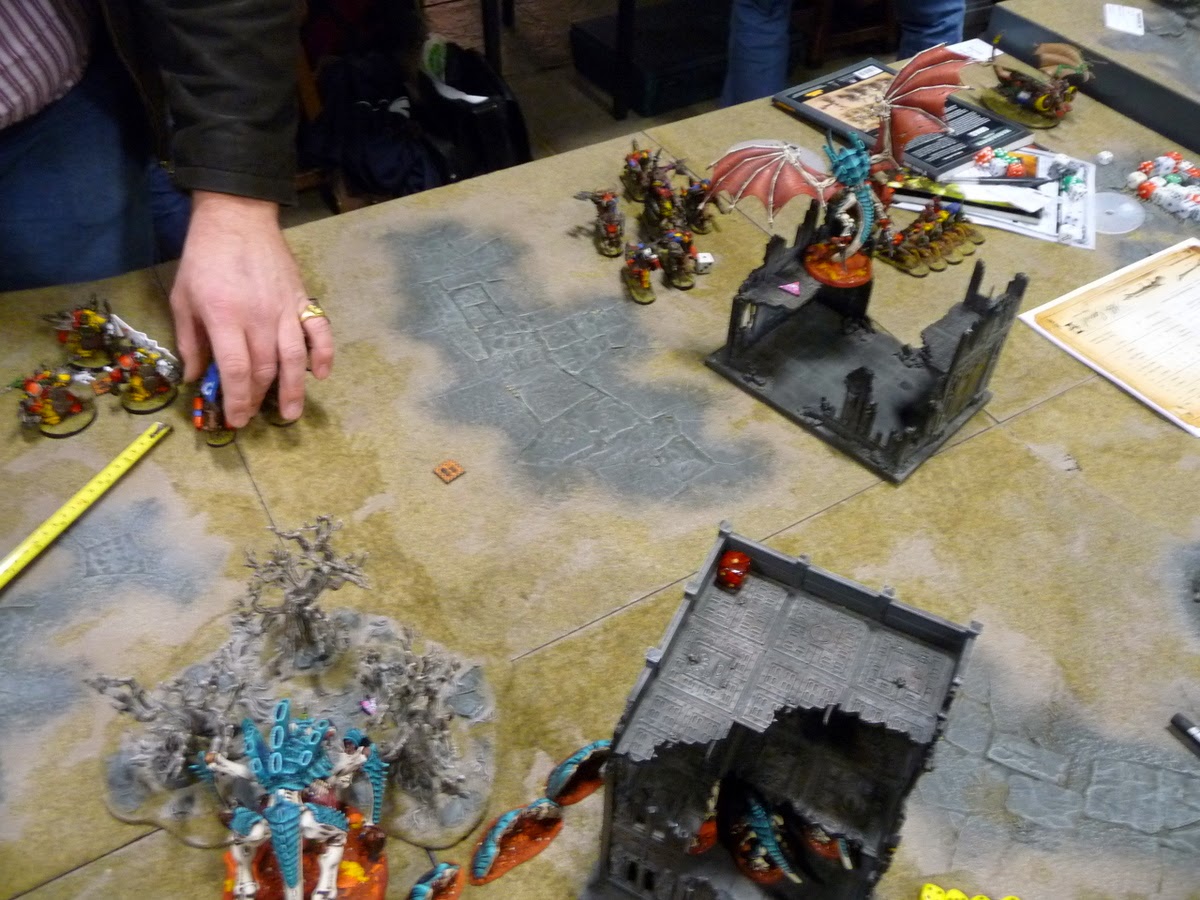 I'm not 100% sure what's going on now, this unit of bikers seem to have suffered a casualty but in the next picture they've moved across the battlefield to the left and is back up to 5 models. Perhaps something died and then we remembered a Jink save? 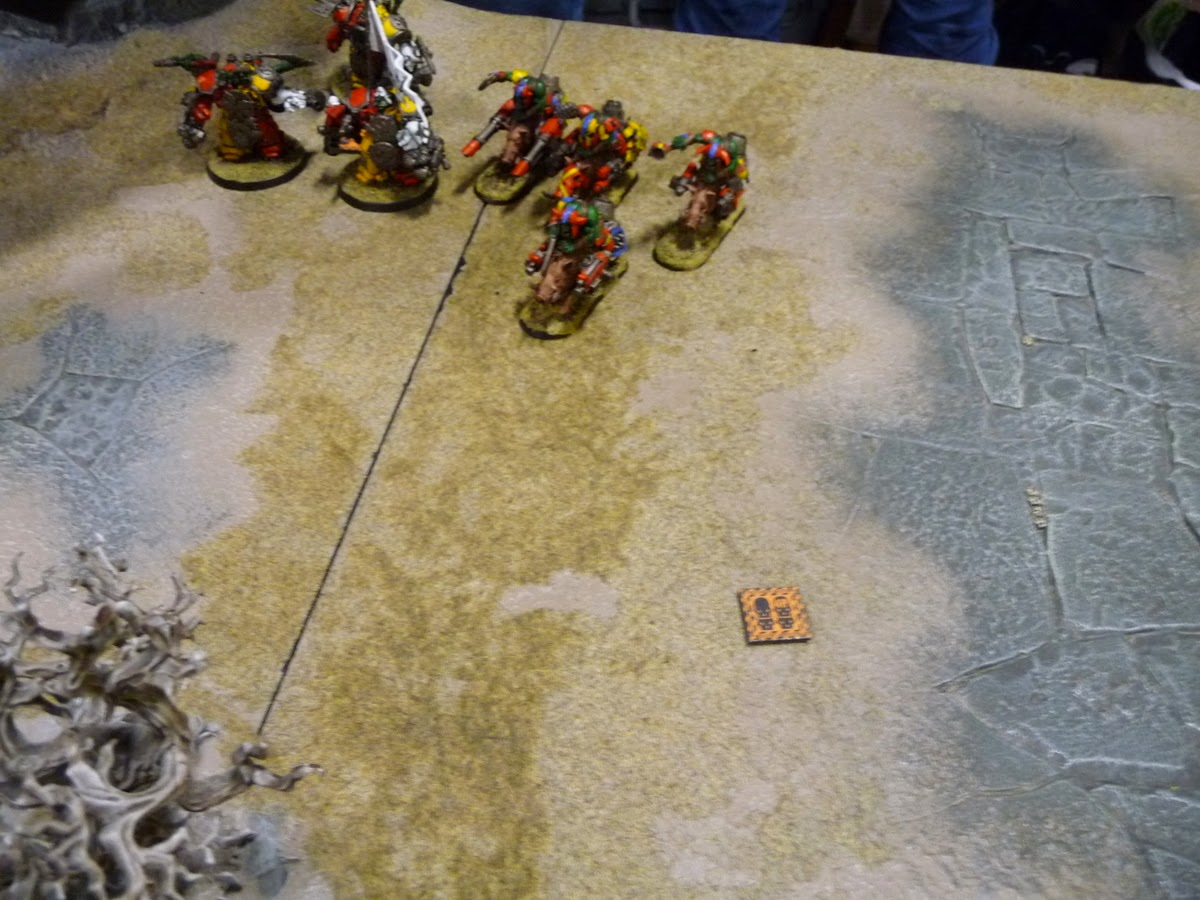 The bikers end up supporting the rest of the army as I advance on the left flank. 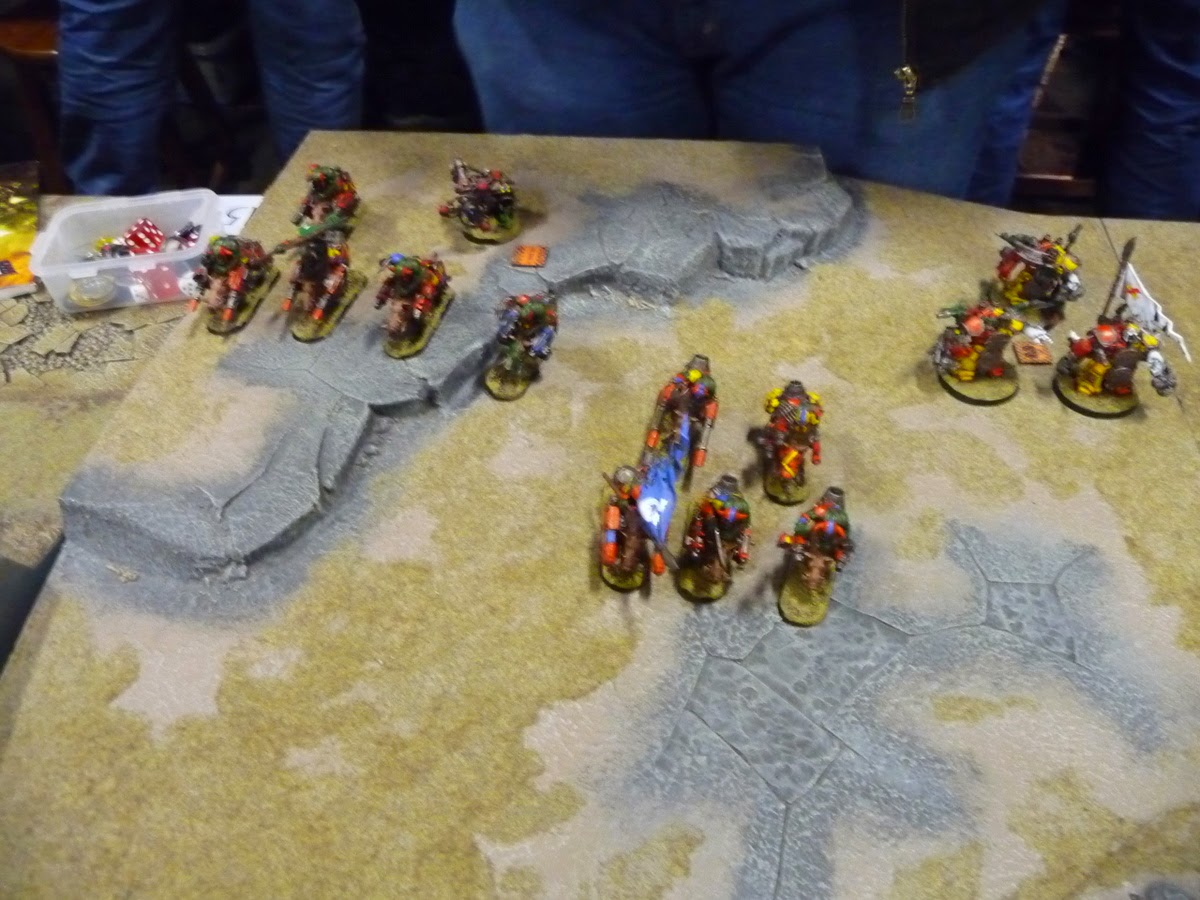 The Nob Bikers lose a Nob and a wound, possibly from the |Flyant Vector Striking but the angle looks a little off. 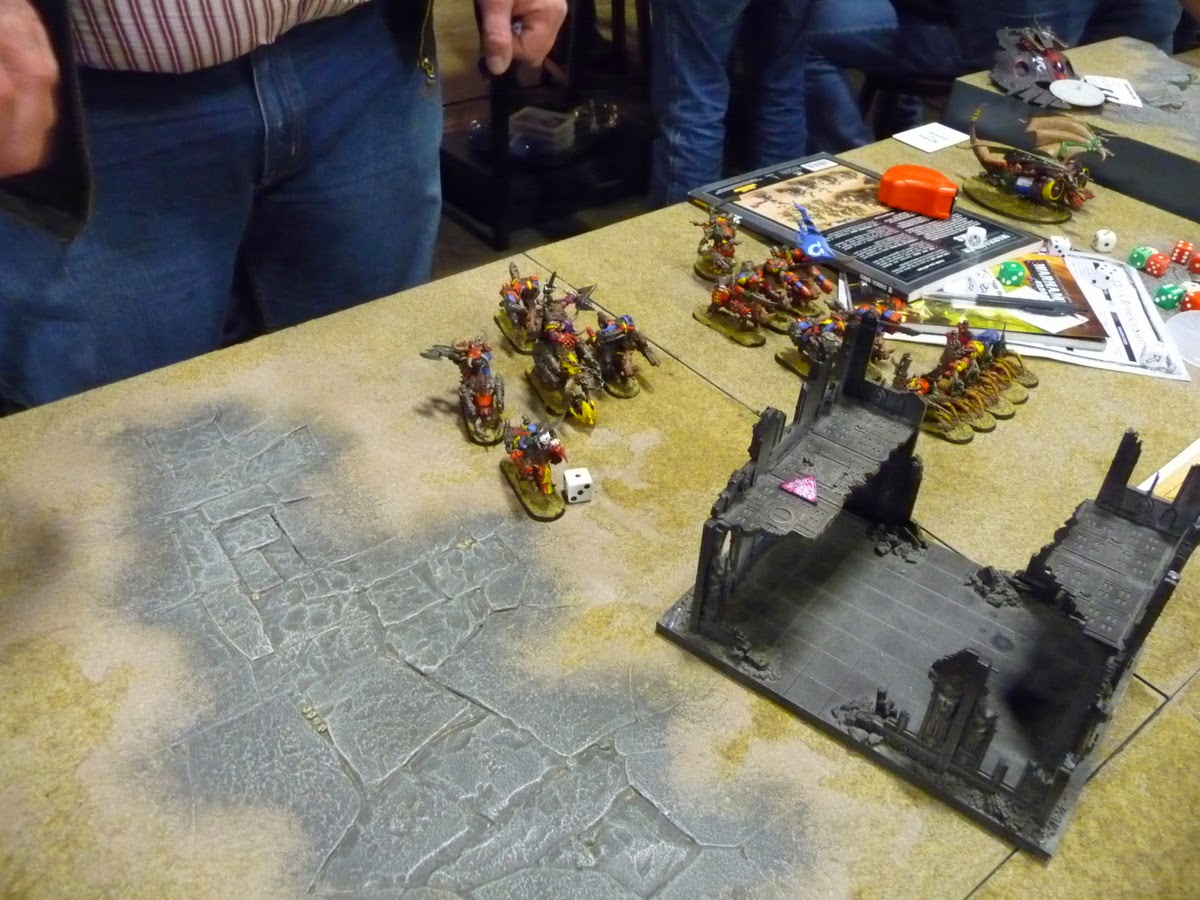 Teh Flyrant swoops behind the Mega Nob, their number was reduced by 1 I think by his shooting. The bikers from the middle suffer 3 fatalities, fail their morale and gun it back to Rob's board edg. 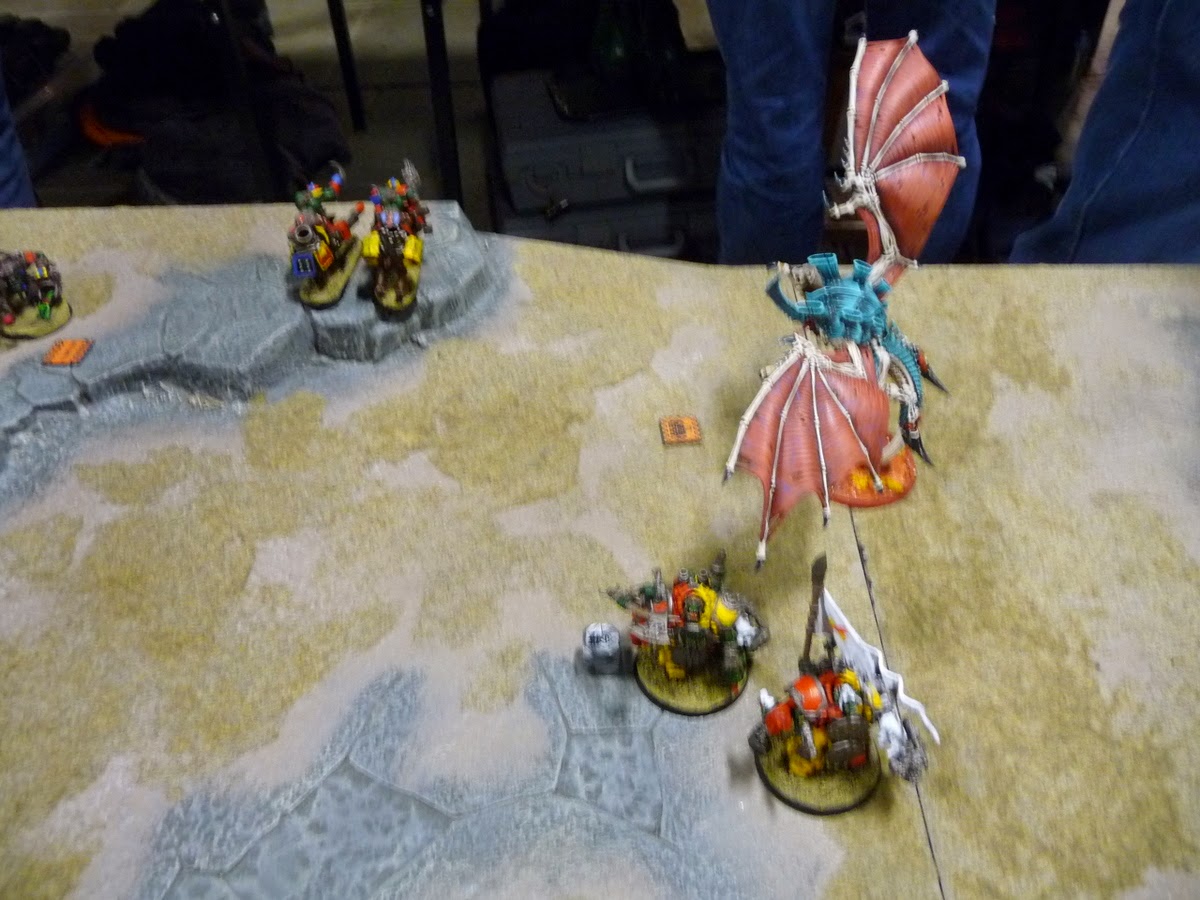 The Nephropid spawns eight Termagants into the wood, they can hea dfor one of the 4pt objectives or stall the Mega Nobs. The Great Maw secures the 2 pointer in front of the Aegis. 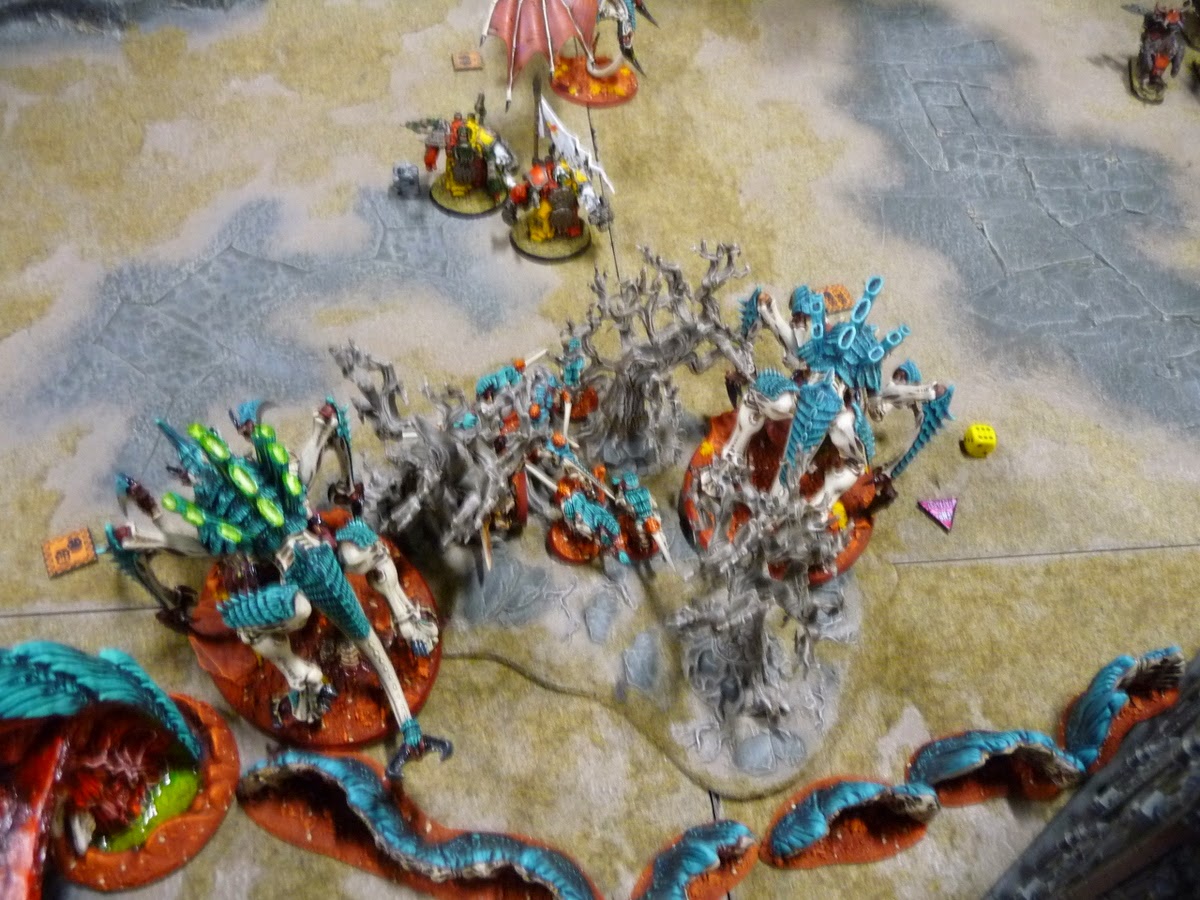 The Nob Nikers lose another Ork, I've no idea why they don't seem to have moved all game, they may have failed a pinning check from the Biovore perhaps. 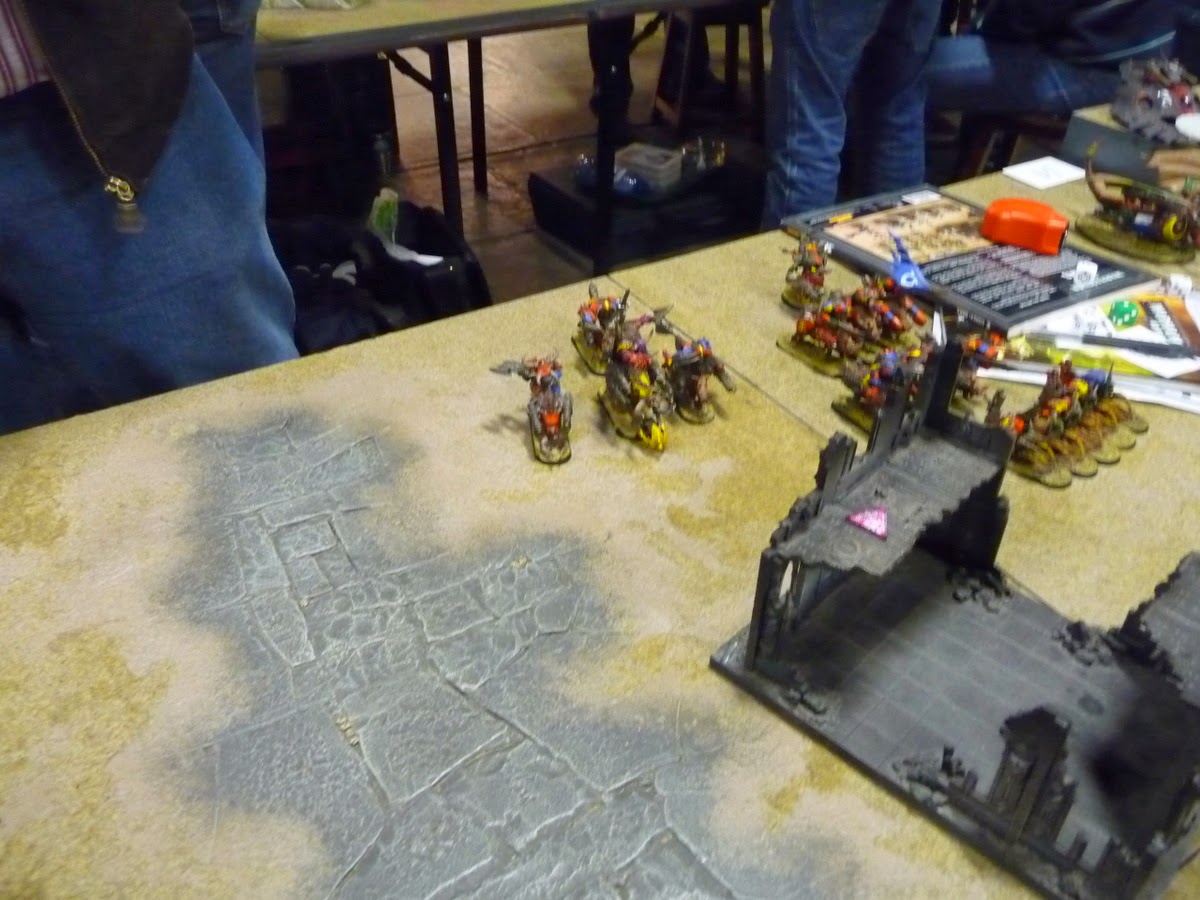 The Nephropid decides to hold up the Mega Nobs but it was an unwise decision, suffering 5 wounds in the process, however Regeneration as an upgrade pays for itself and eventually I get a wound back. 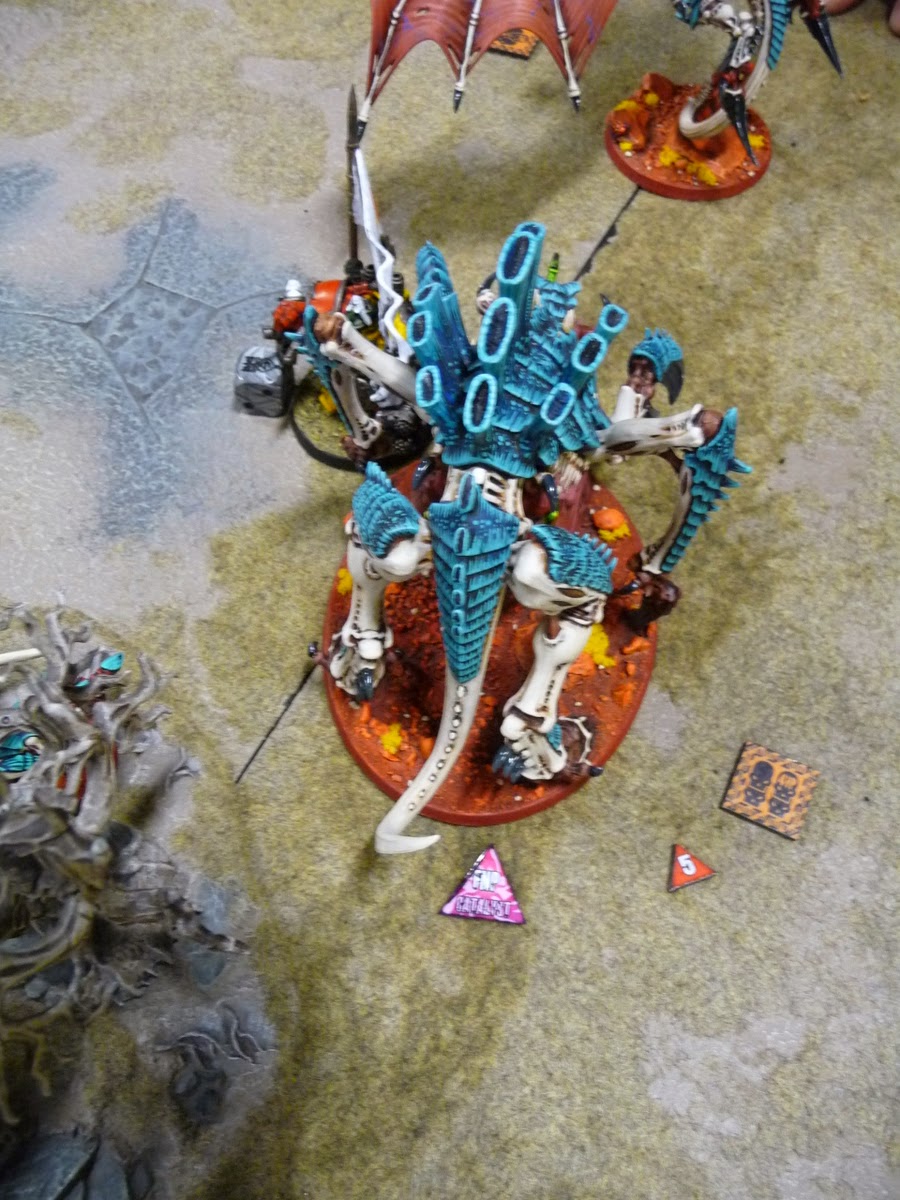 The Nob Bikers finally manage to find first gear head on over to finish the Nephropid off, taking it in it's flank. 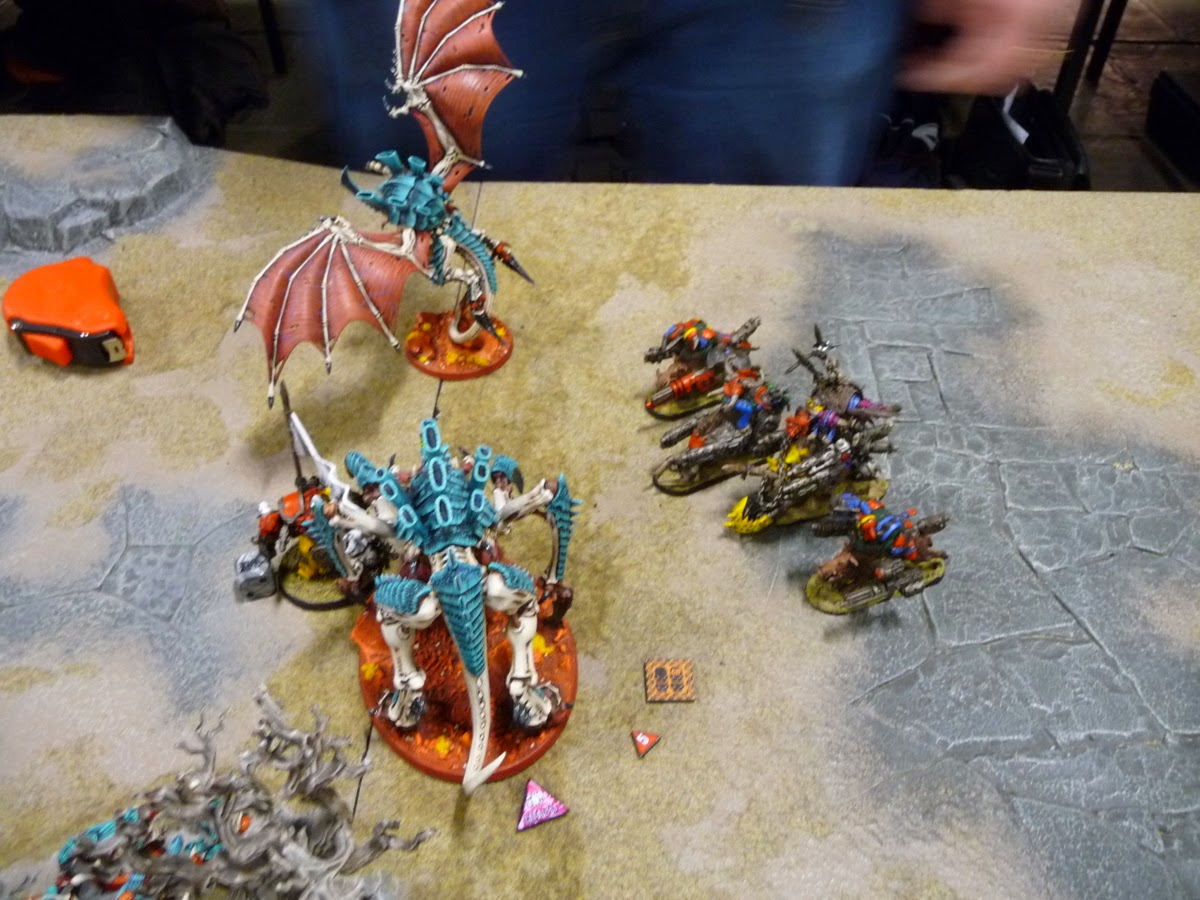 The other bikers head for the great maw who also gets shot by the Mekboy, his gun firing a massed ball of Snotlings that clamber over it's chitinous carapace biting, scratching and nibbling without doing any damage whatsoever! 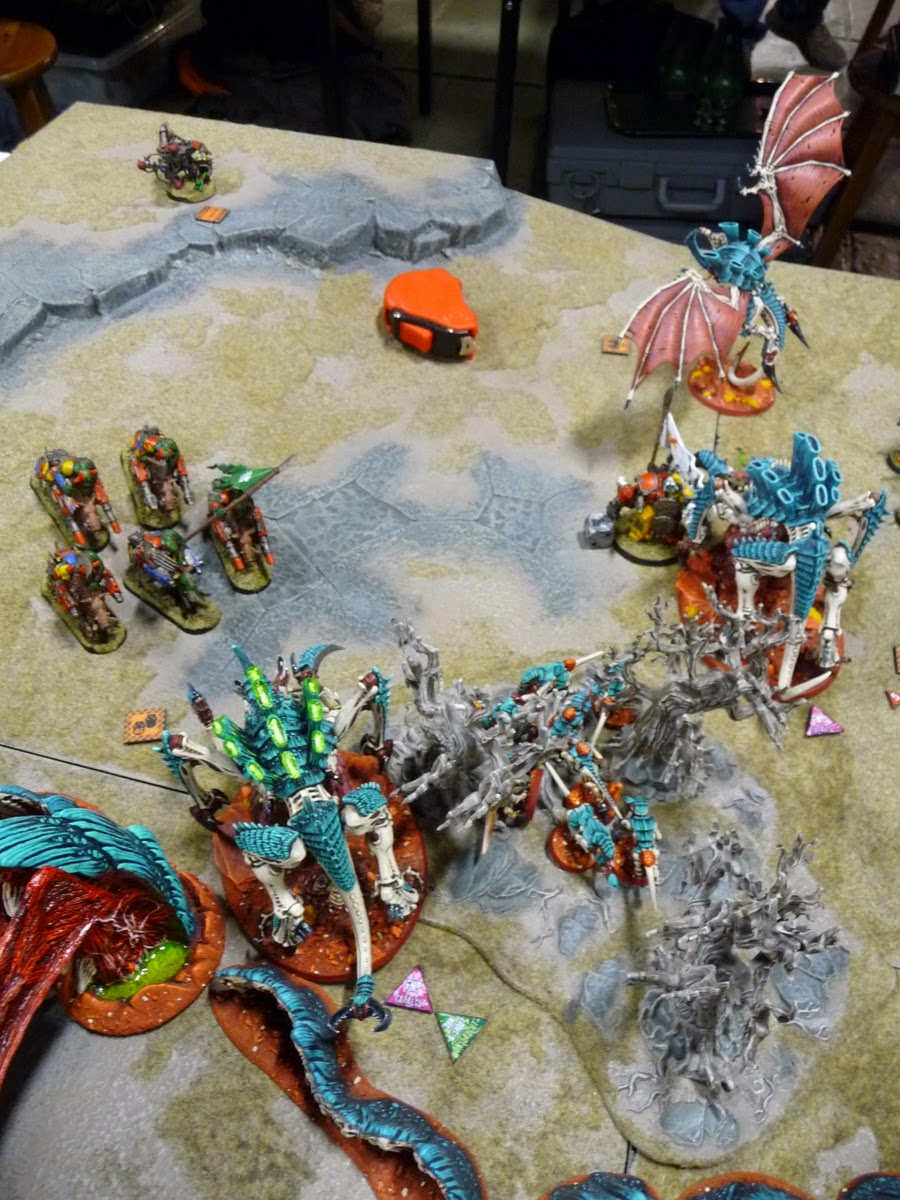 The Hive Guard remain hidden, but still within Synapse range of the the Nephorpid and the Zoanthrope on the Skyshield. I think they were a little ineffective this turn. 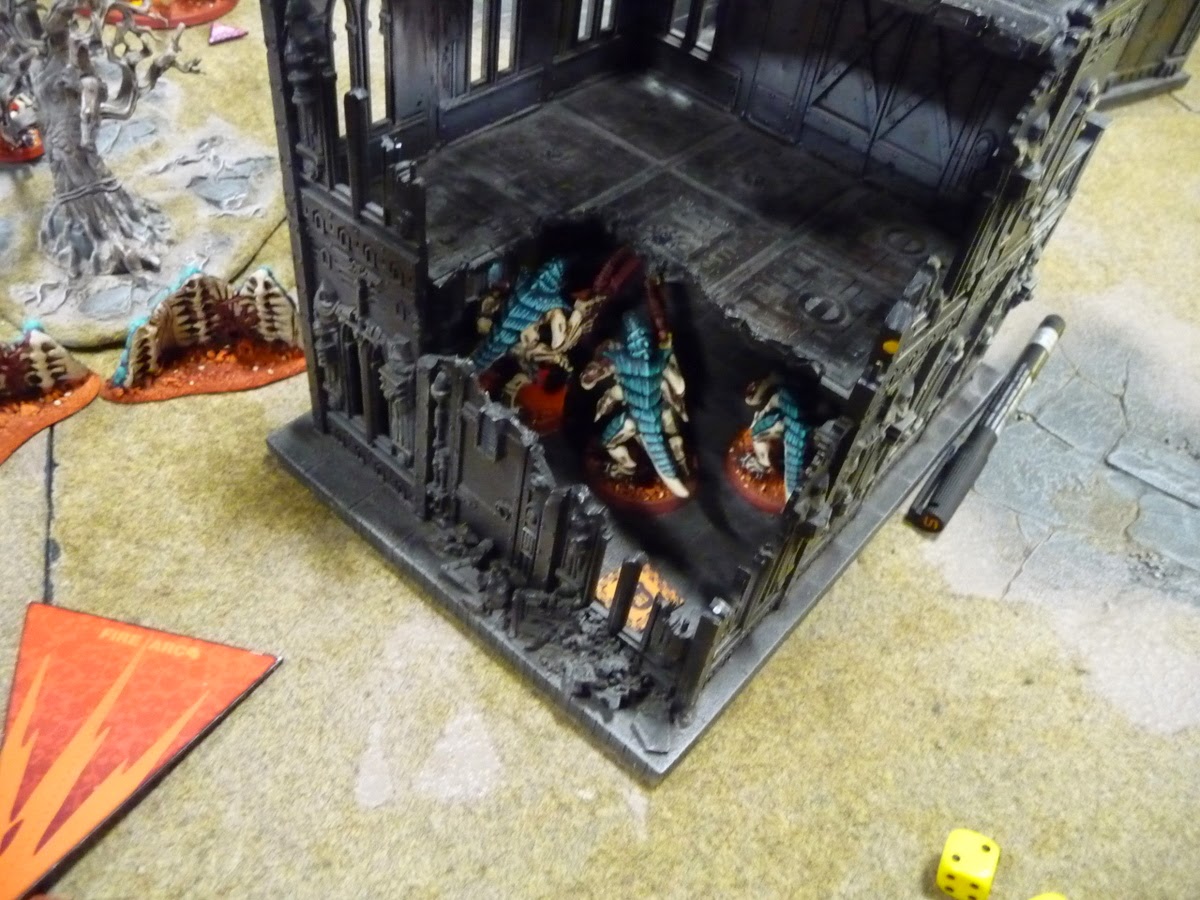 The Nephropid kills a Mega Nob and puts a wound on the last. He's got two wounds left thanks to Regen. He's charged byt the Nob Bikers who fail their Fear check and a re reduced to WS1 [not the two Paroxysm markers that combined are -3WS but equate to WS1 if you follow]. They out a wound on him thanks to Hammer of Wrath but not before it takes down the last Mega Nob. 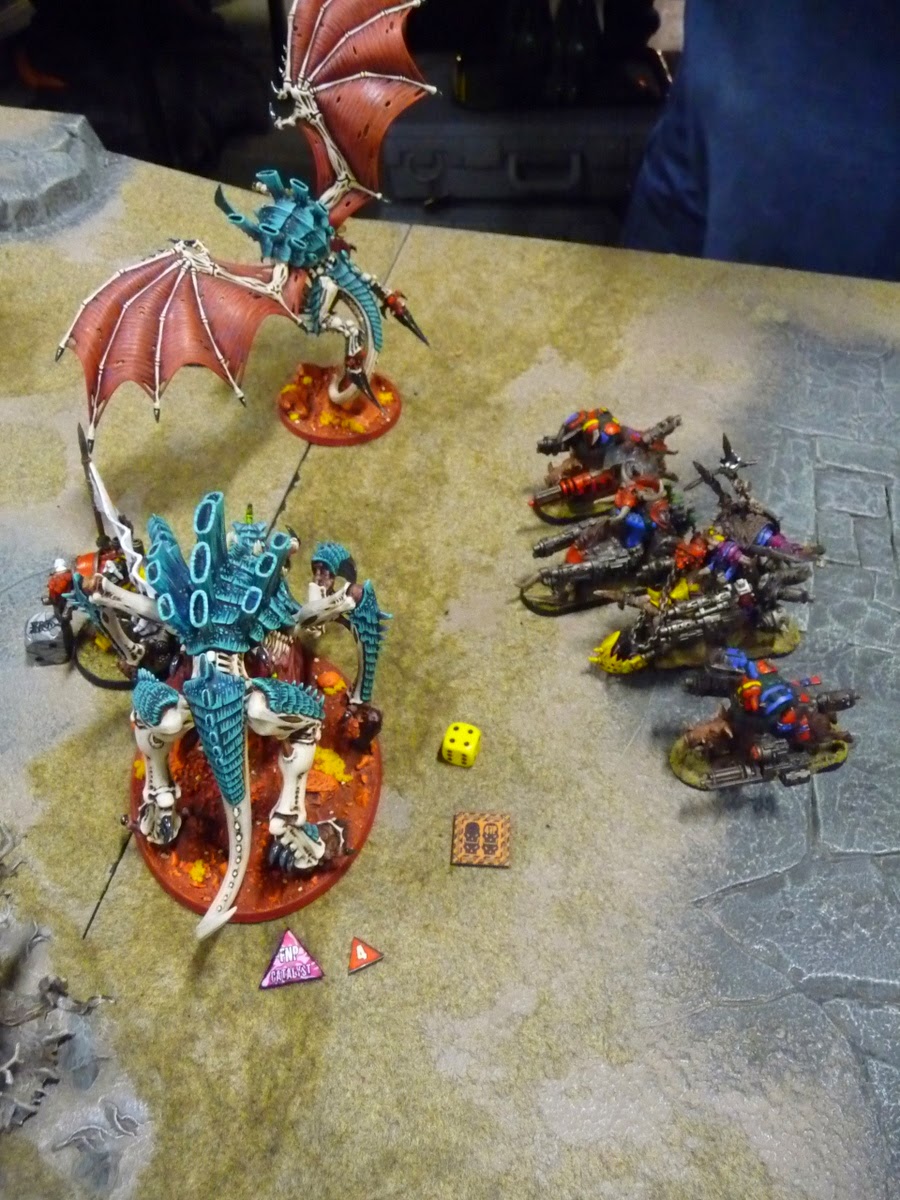 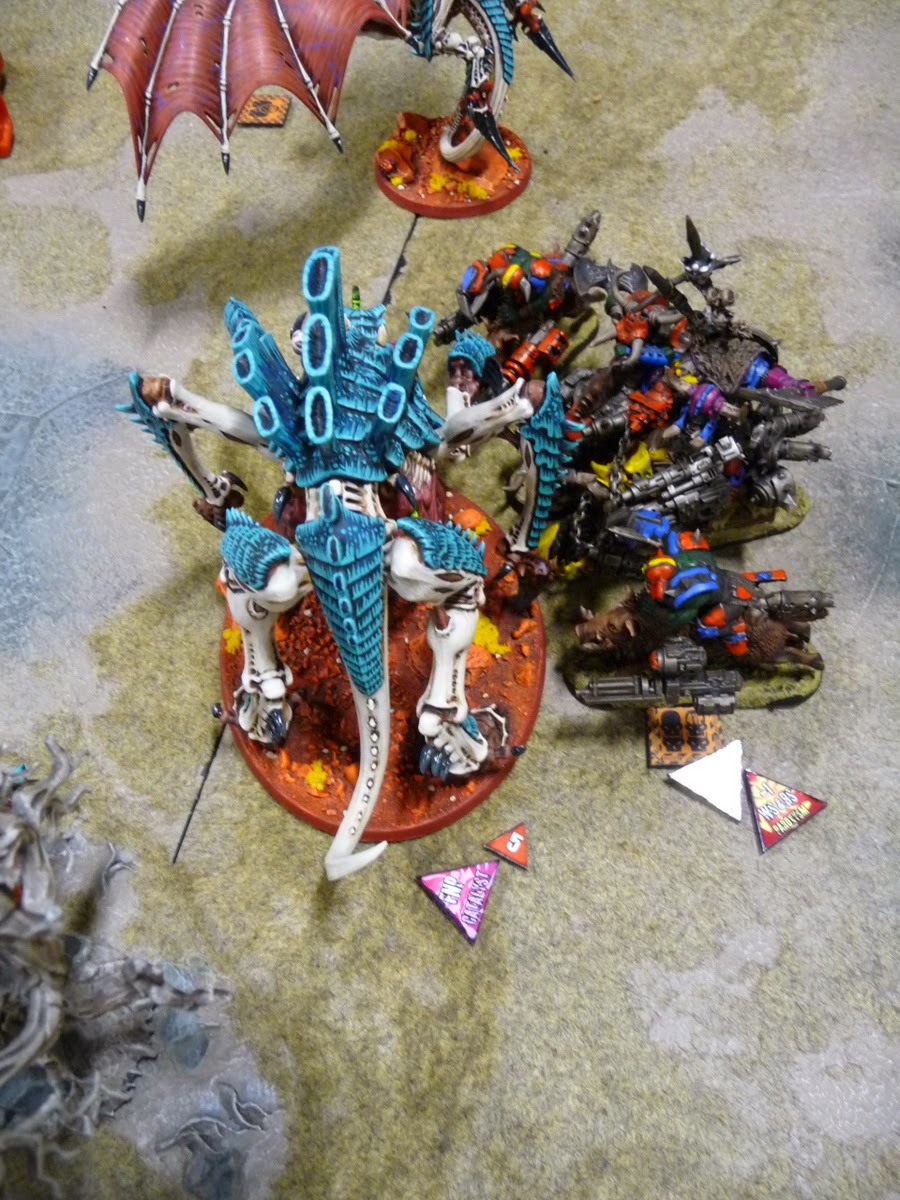 With it's attention focussed on killing the last Mega Nob the bikers finish the Tervigon off with the help of a Power Klaw. Six of the spawned Termagants die in the Synaptic back lash from the death of the Nephropid. 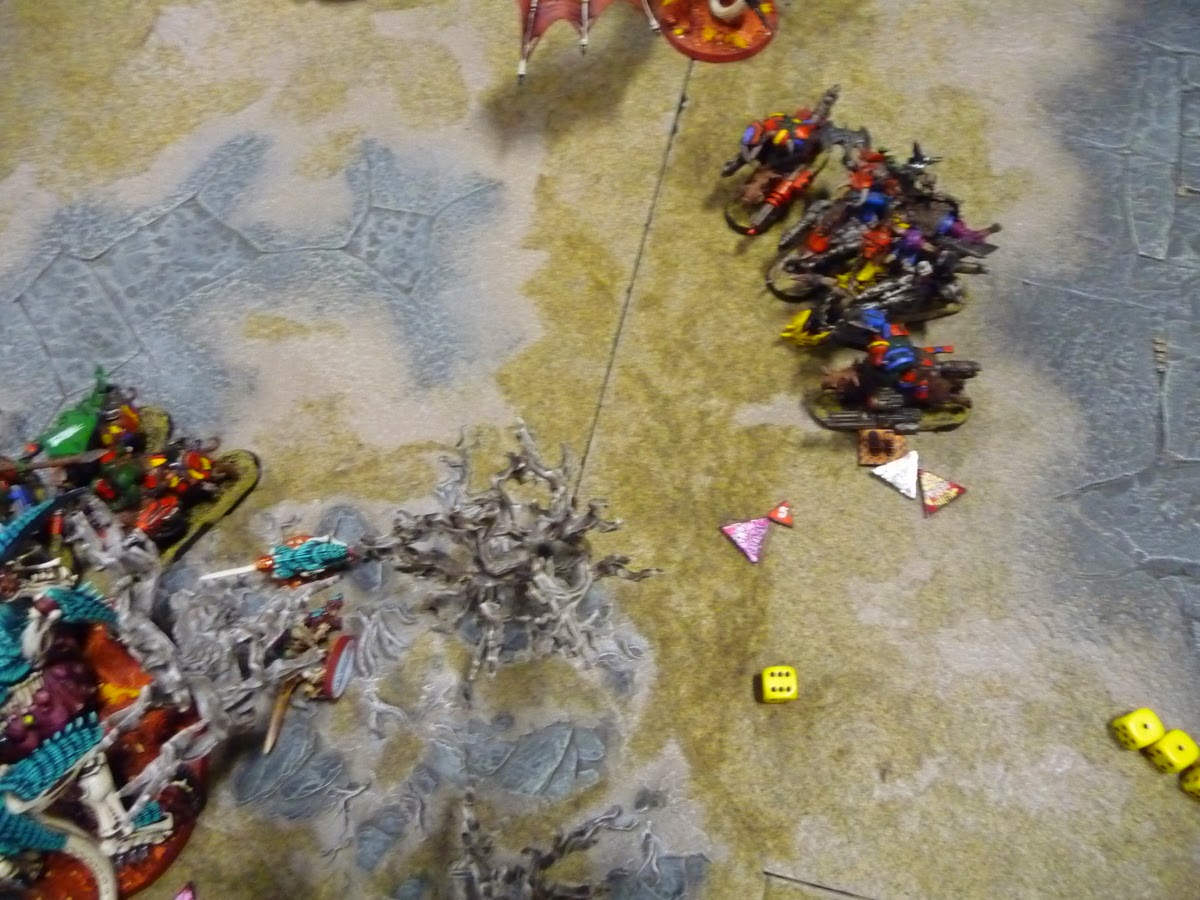 Meanwhile the last unit of Ork Bikers charge the Great Maw, Rob's rolling it atrocious and he cannot geth the WAAAAGGGH!! off, and the unit fails it's Fear check and can't compose themselves enough to land a telling blow. 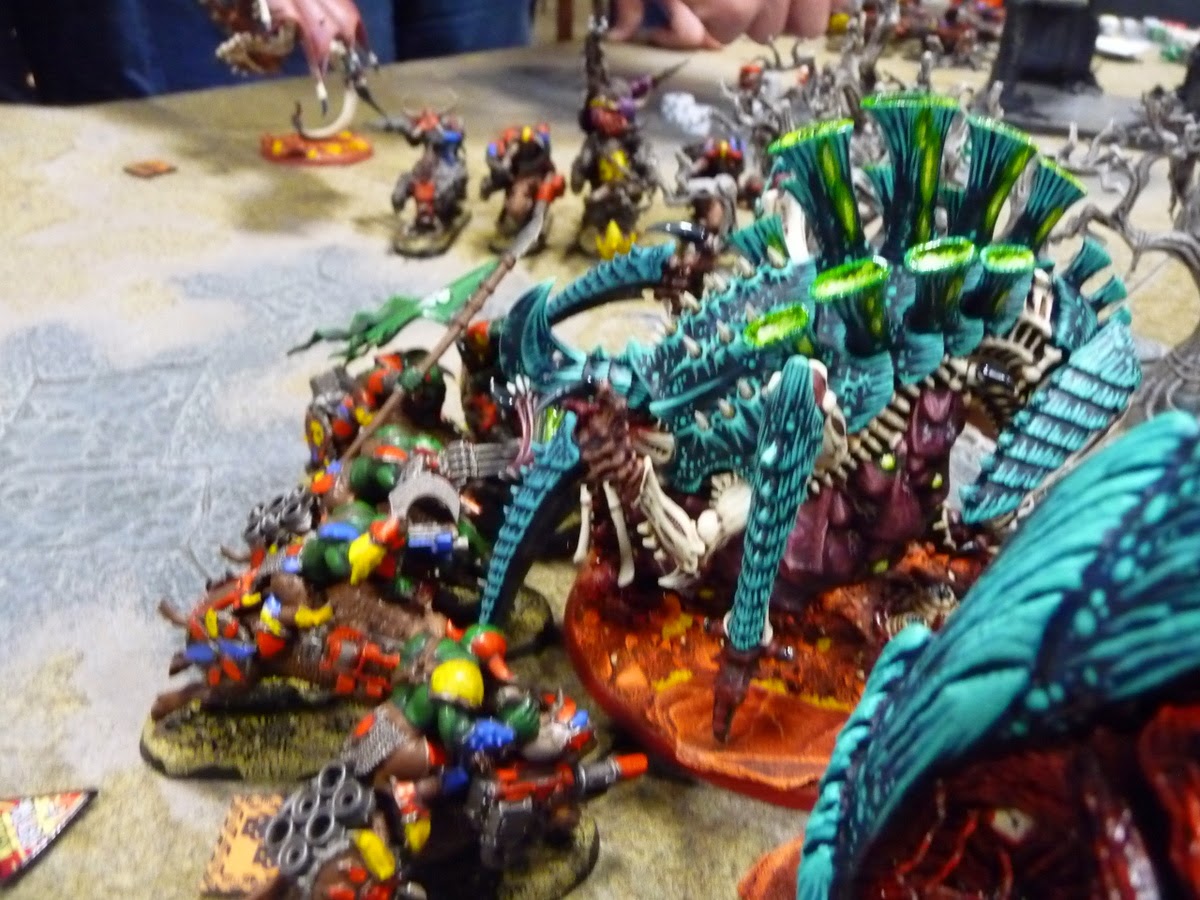 I think I decided to glide the Flyrnat at this point, with the plan to assault the Nob Bikers but all the shooting beforehand removes the bikers from the battlefield. 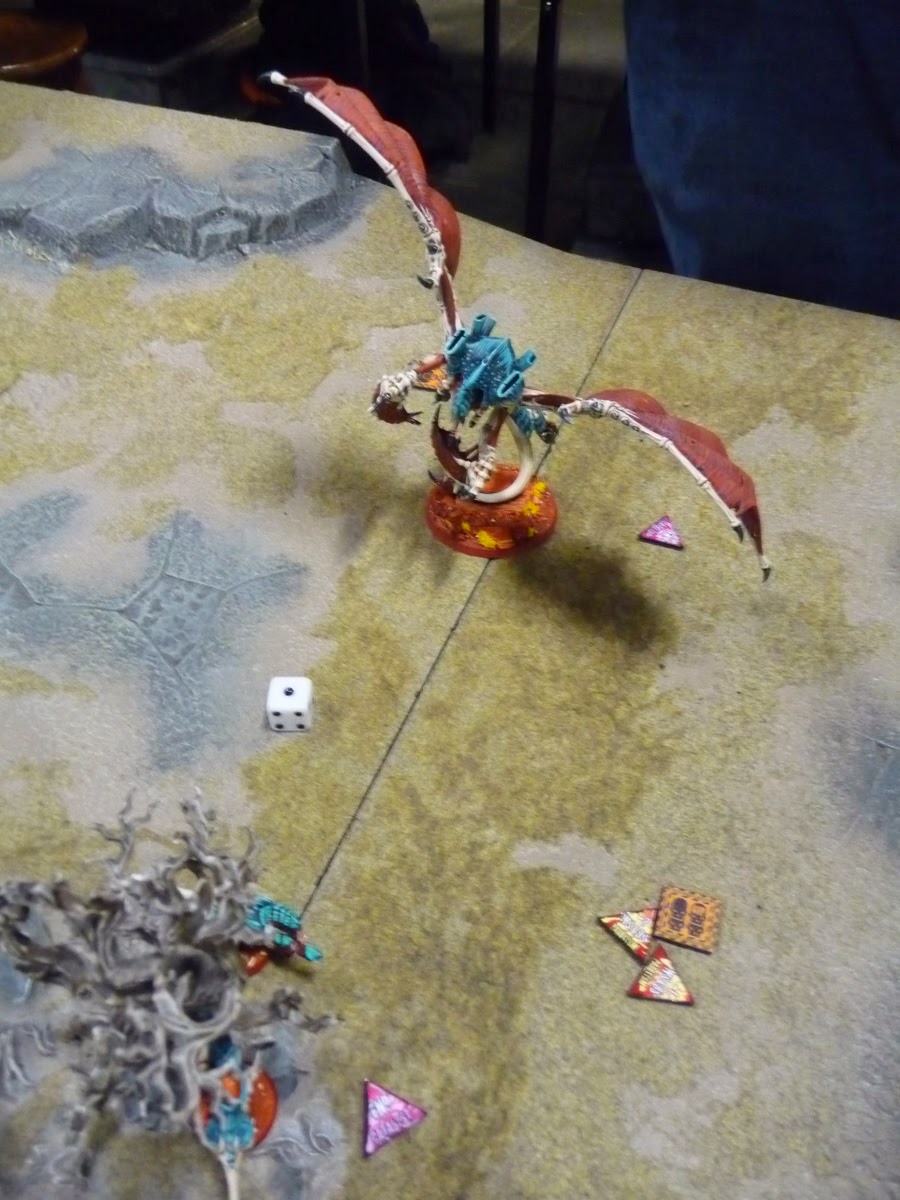 The Mexboy is also killed, thanks to the Quad Gun or the Biovore. With only the four bikers assaulting the Great Maw left of Rob's force the large brood of Termagants move and run out of the Brood Nest, heading for Linebreaker and the now vacated 4pt objective at the back of the board. 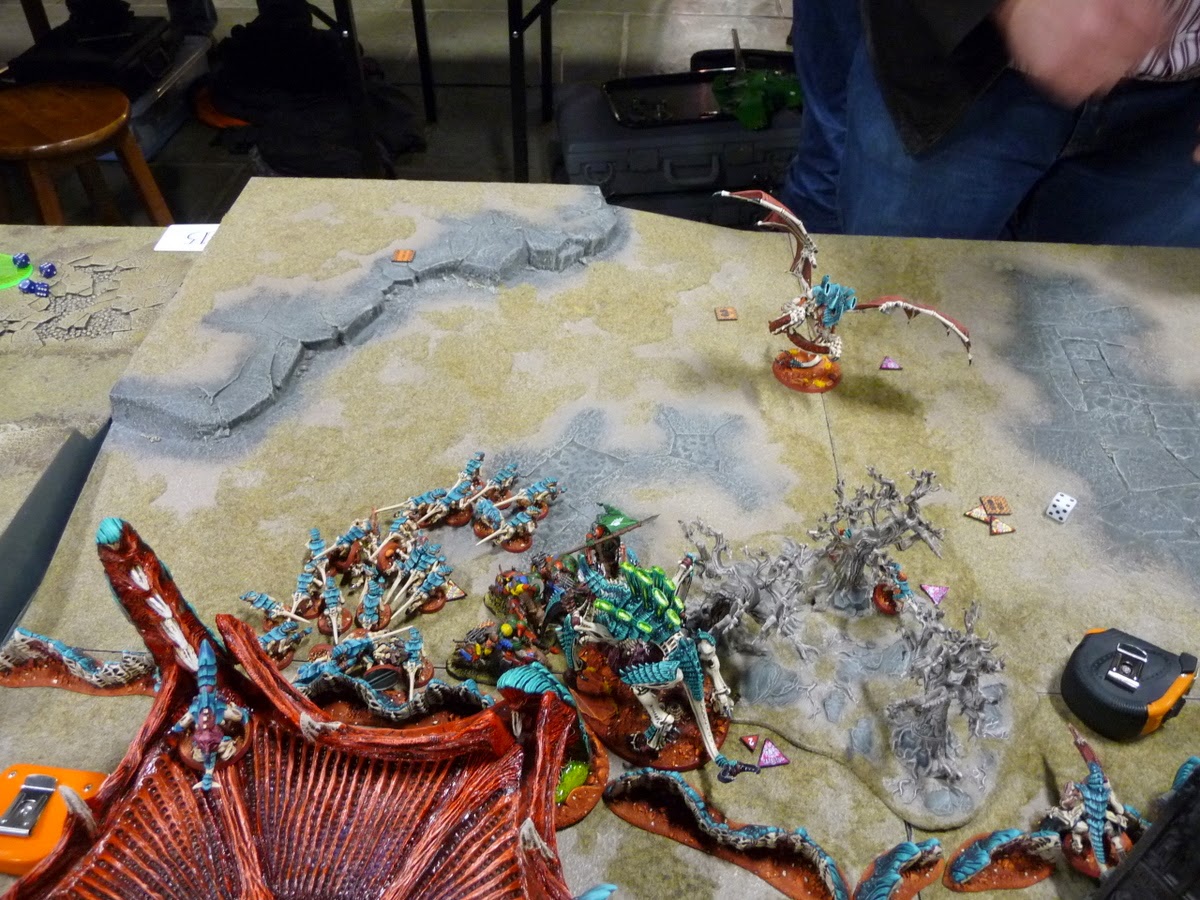 Finally the Dakkajet arrives but fails to do much damage, although the Flyrant has a 3 wound counter on him later on so maybe it wasn't too bad afterall. The Great Maw takes 4 wounds, even with Catalyst and fails to actually kill any of the bikers. 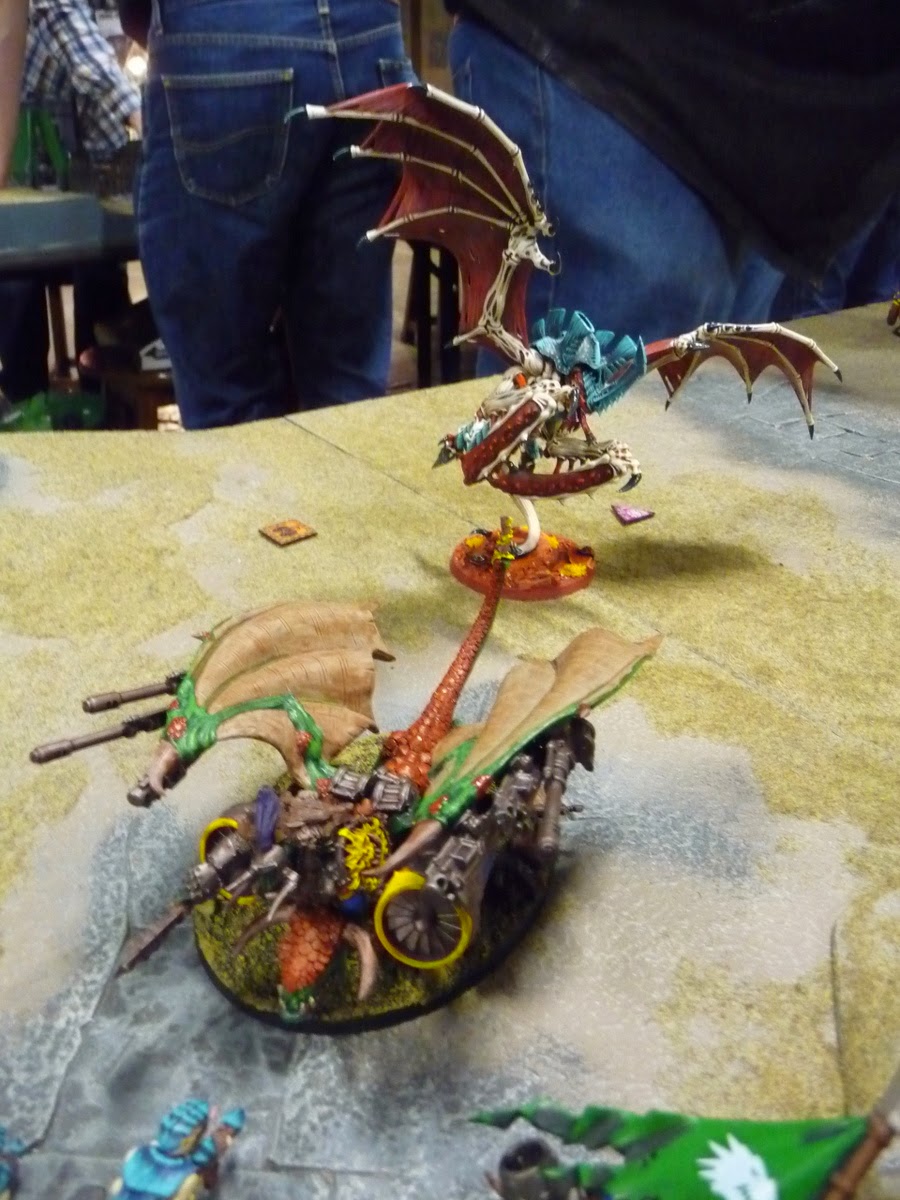 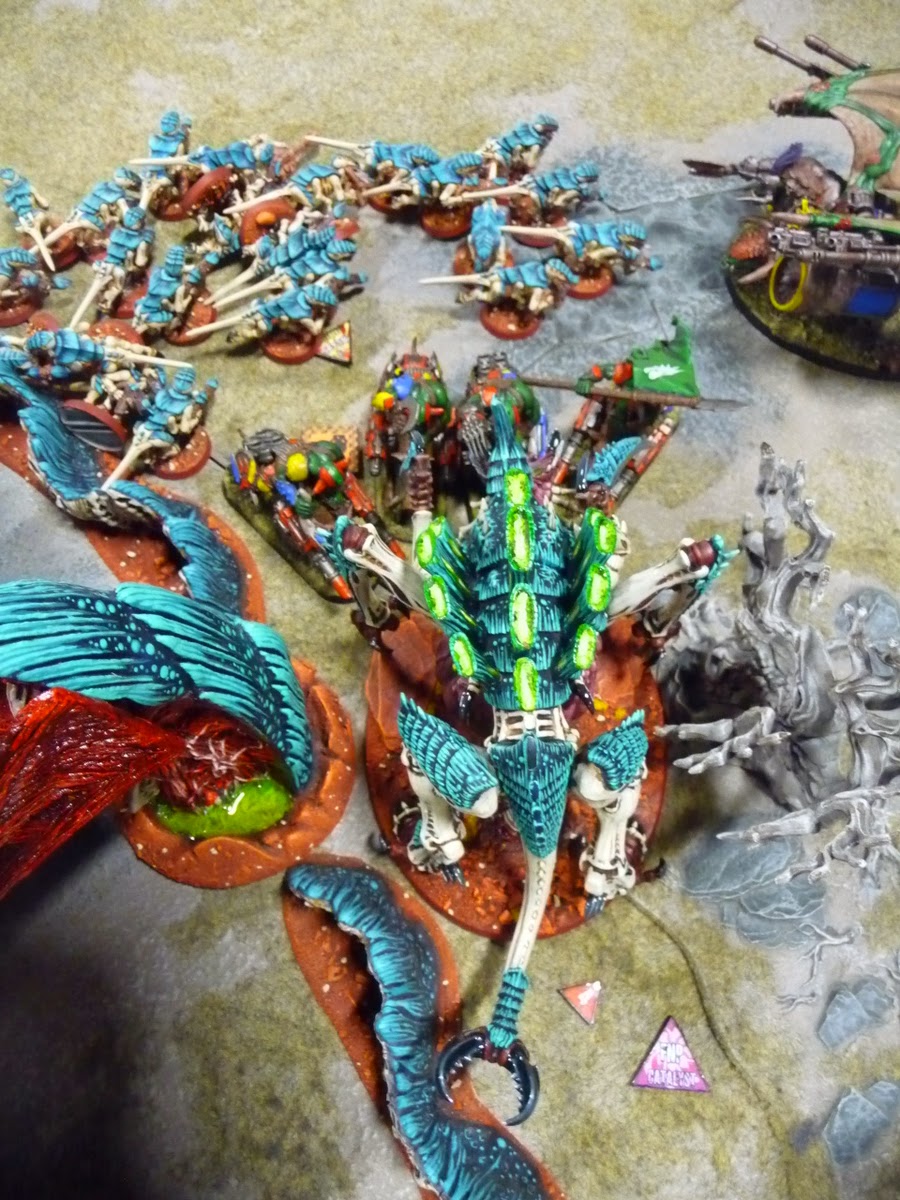 The Bikers manage to kill off the Great Maw and somehow the Termagants seem to suffer almost no casualties in the backlash and still being within Synapse of the Flyrant and Zoantrhope head for the Ork Deployment Zone. The Flyrant meanwhile glides over to the treesand together with the Hive Guard do to the bikers what the Tervigon couldn't - kill them all. 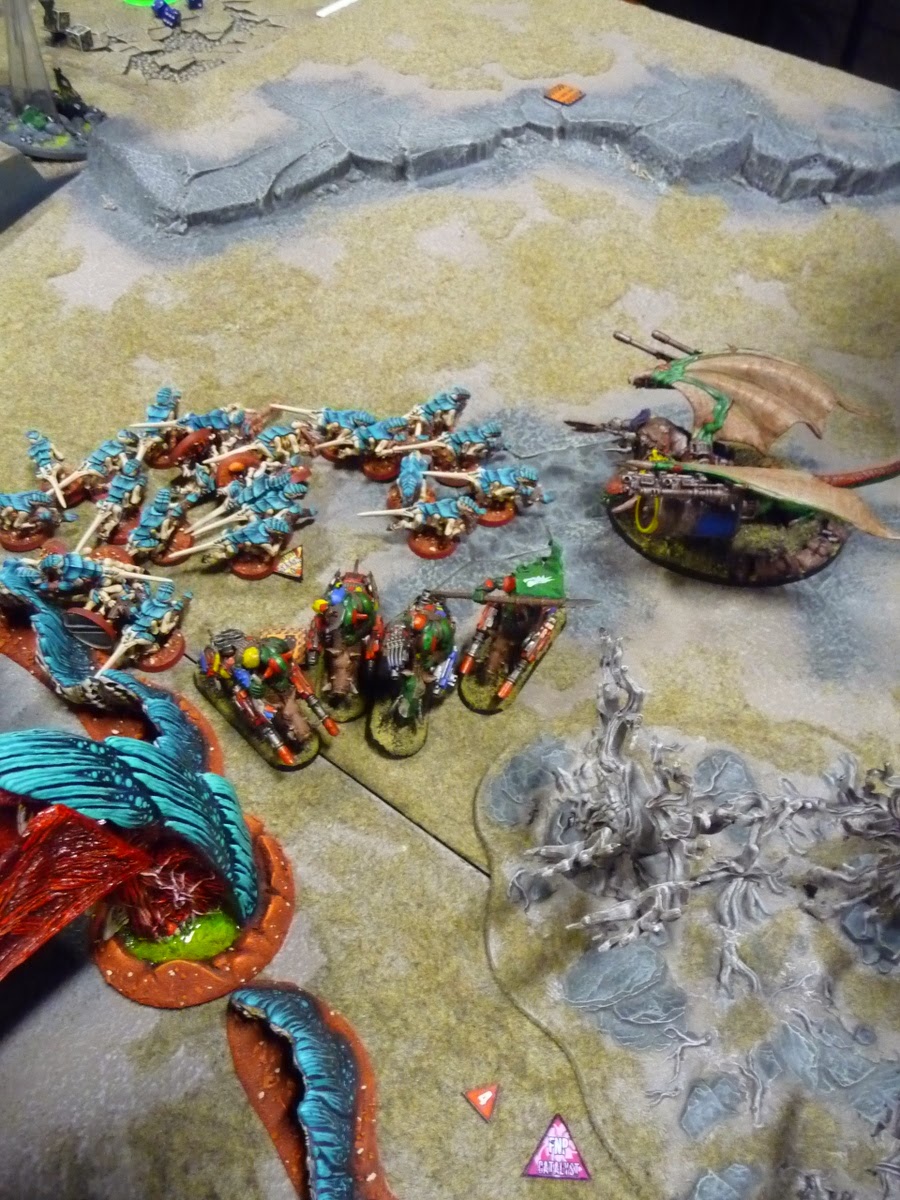 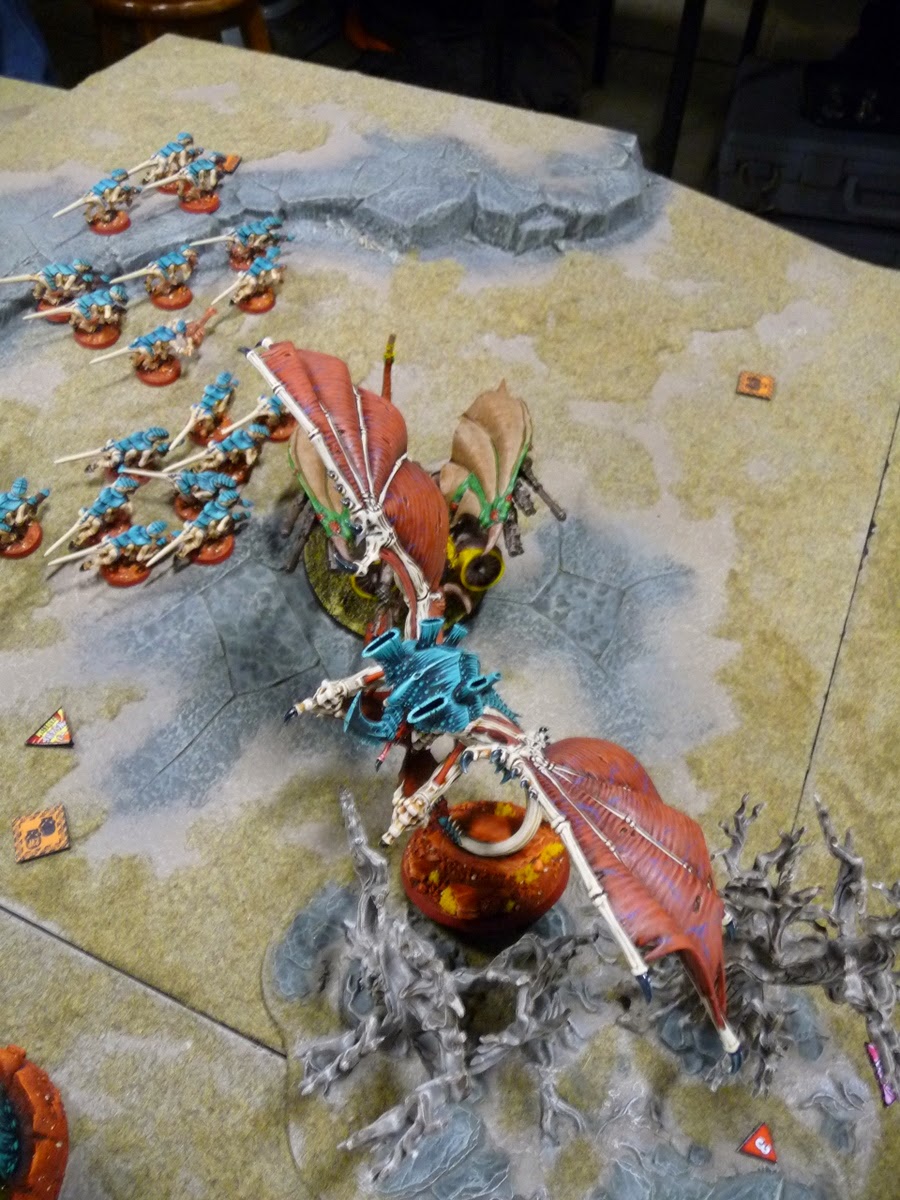 The game is over, Rob can't win and I've secured some of the high end objectives. Just to give him something to be happy with I suggest he just see if he can shoot the Flyrant down with his Dakkajet which he does. 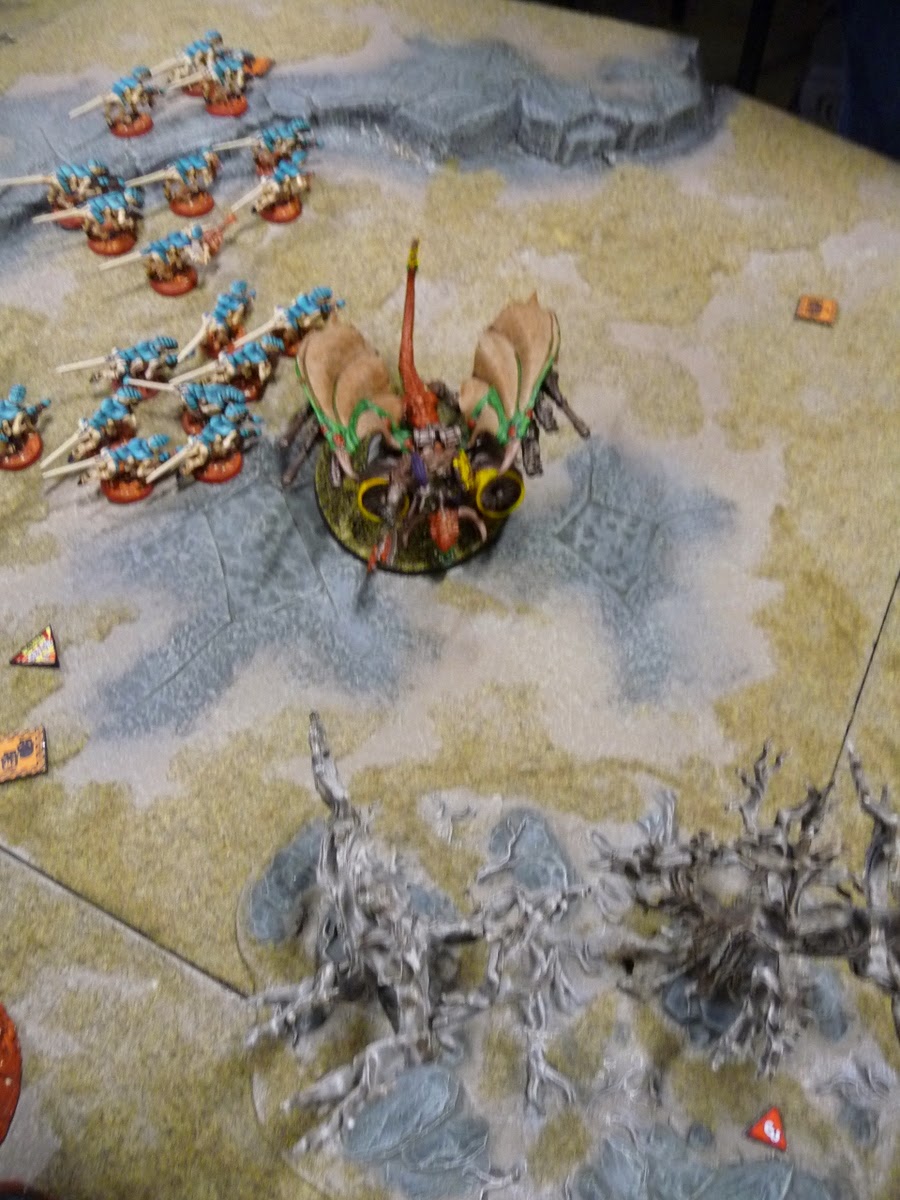 I've written down the score as 10:1 to me, I got First Blood, Slay the Warlord and Linebreaker, the 4Vp objective and presumably another three pointer somewhere. Although there was a point where Rob only had 4 guys on the battlefield those couple of turns he did manage to turn things round to remove a couple of my most important models. The scoreline looks very one sided and his model count too is not good. But I think if he'd been a little more fortunate with dice rolls he could well have damaged me enough earlier to prevent me me overwhelming the board.

One thing I must think on is how less effective Tervigons are in combat. With only 4 attacks and a low weapon skill I need additional troops to add the killing blow, perhaps 10 Hormagaunts, or 5 Genestealers in tow would help tip the balance?

With 35 minutes of game time left I quickly see a prime opportunity to pack up everything and have some fun. Given how much stick I've had all weekend for being the last one to be ready to leave I get everything away in 30 minutes flat. I then mooch over to Liam's table where he is in a hotly contested battle against a Warhound Titan my suggestion that I'm packed and ready to leave is met with barely contained rage so I saunter off to repeat the process on Scott and Otty and somehow manage to come out of it with all my own teeth!

So there we go, 2 wins and 3 losses, better than last time at least and although I'm way down the Tyranid player list I've had a really great time. Anyway, I've got the awards page to add up, various other pictures and I'll see about a post Thrones conclusion too.
Posted by 40kaddict at 12:20