...and the post-Thrones malaise hits

I don't know what's happened but my momentum has seriously stalled practically as soon as I wrote my 'what's on my pallette' post. I've tried to do more nids, much to my own disgust, in an attempt to kickstart my motivation. I've done little bits but it's all the metallics on the Dark Angels that I can't bring myself to start, so I went bug. The problems continued as you can see on my Venomthrope - the blue paint just won't stick to the Red Oxide Primer! 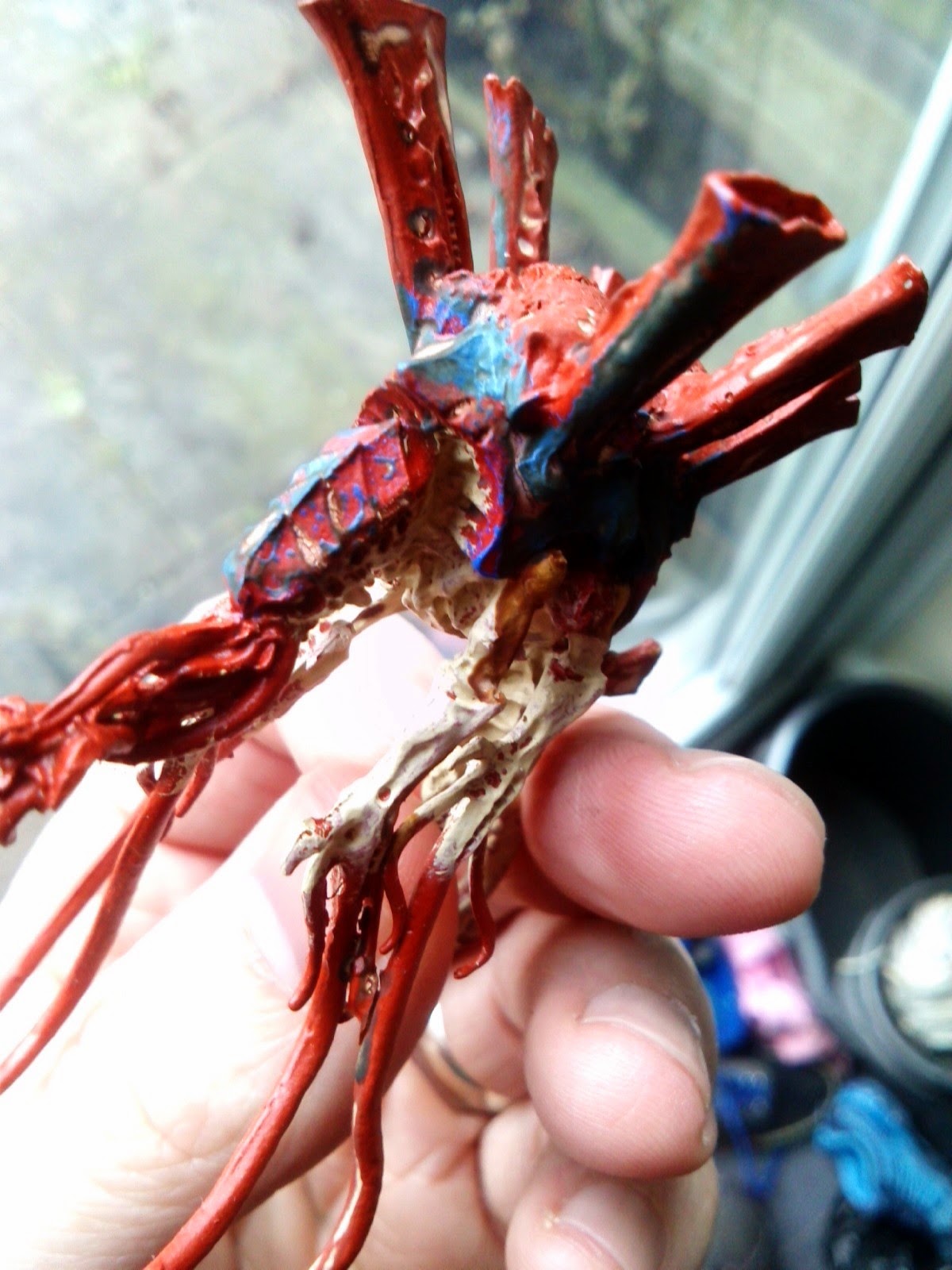 So you can see I tried to create some sort of 'key' for it to stick to, using a product I already know adds a fine texture - Seraphim Sepia - hence all the powder smudges where it's gone all chalky. Nothing like being able to guarantee a failure of product and therefore use it to your advantage instead of it ruining your model. I've since added some more blue on top and it's 90% covered now, whether that's to do with the Sepia I don't know but the problems haven't helped me progress. 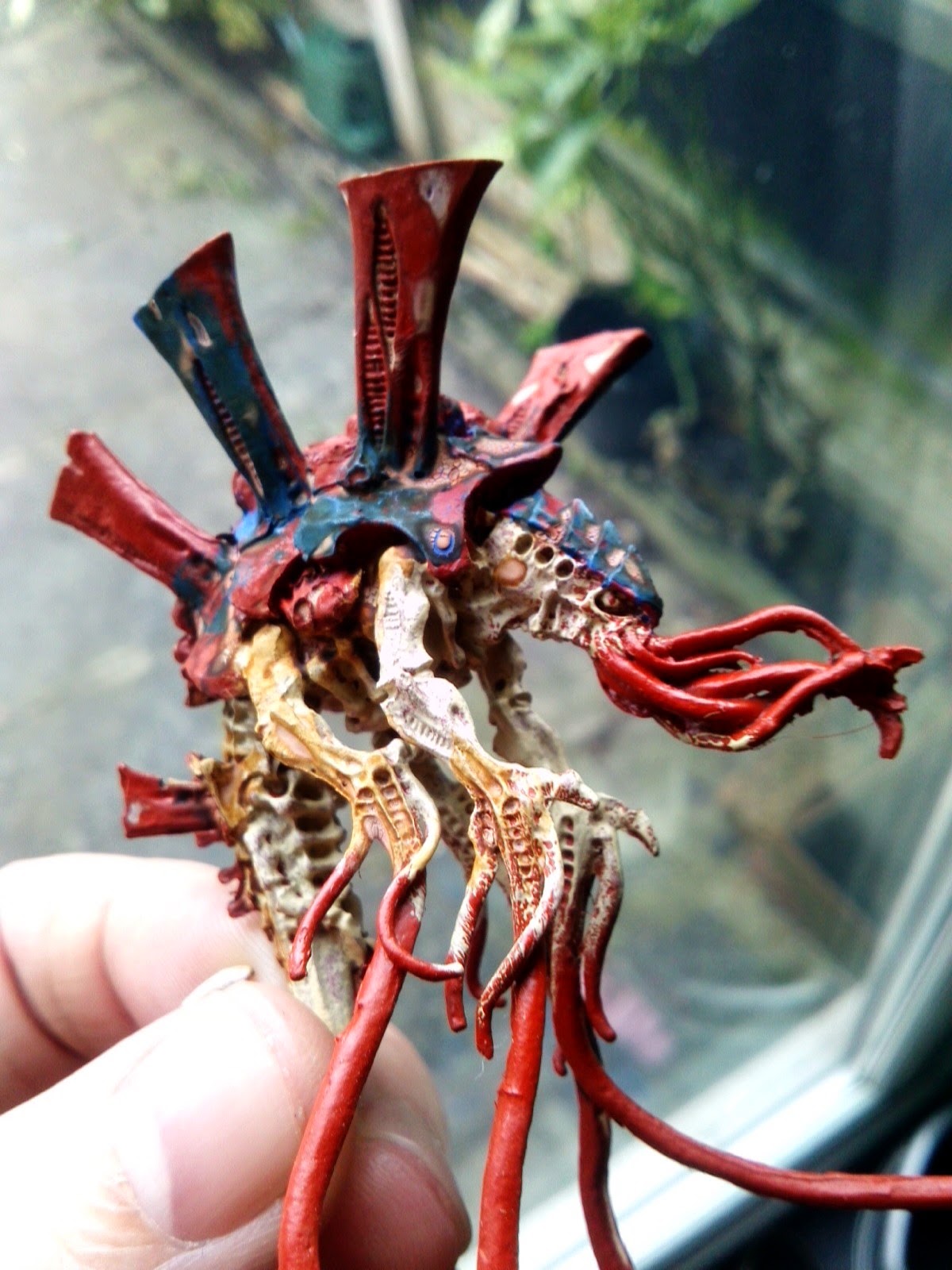 I also went completely off-piste and started my Carnifex, it's been magnetized but I still need to resolve what to do in his spare limb sockets. I've done the Felshborer Hives as twin linked Devourers and they're polarized so I can use them on the Great Maw too. But when you use them you still have those spare sockets. 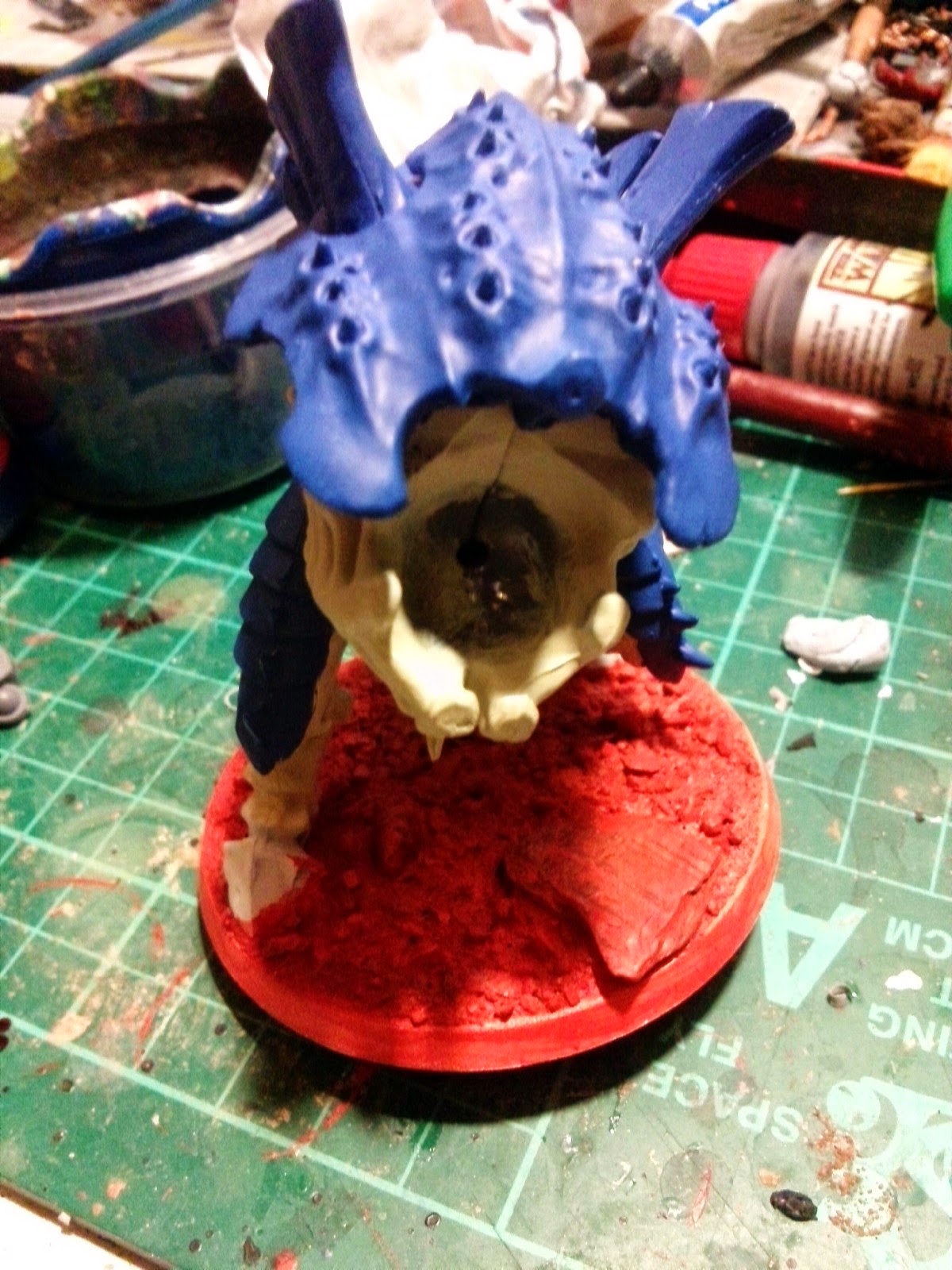 I'm doing some Mawloc Claws for feeble combat weapons and may do an alternative of Venom Cannon sacks but need to model the right hand sack as they're all lefties, or 'sinister' as they're officially known in our house! 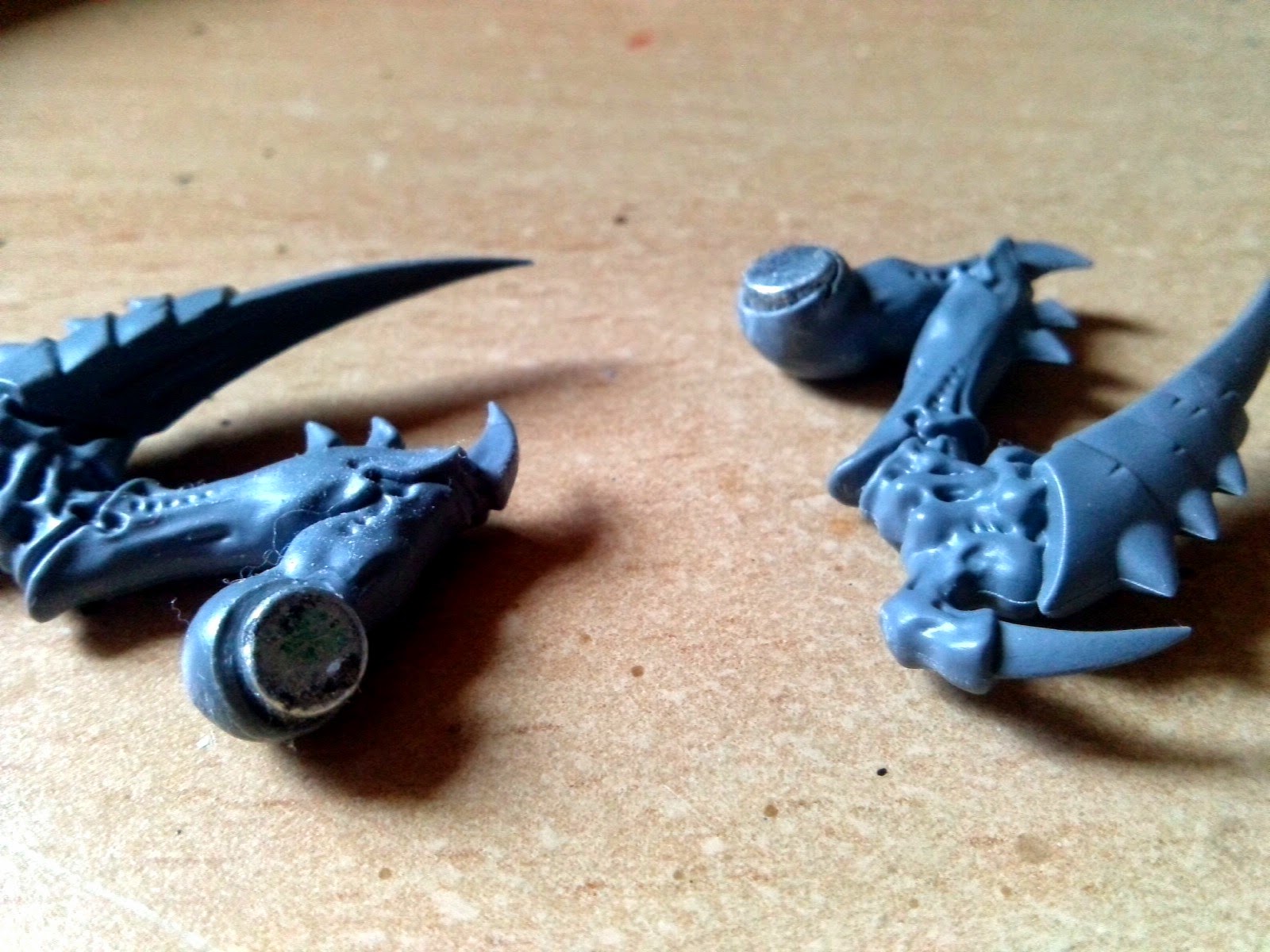 I also had a game with PeteB and took what I thought was a really 'dirty' list - two Punisher Vengeance Weapon Batteries, Flyrant, 2 Tervigons, 60 Termagants a Mawloc, Hive Guard and Biovore. I even proxied my spare Tyrant as a Dakkafex to see what would happen. 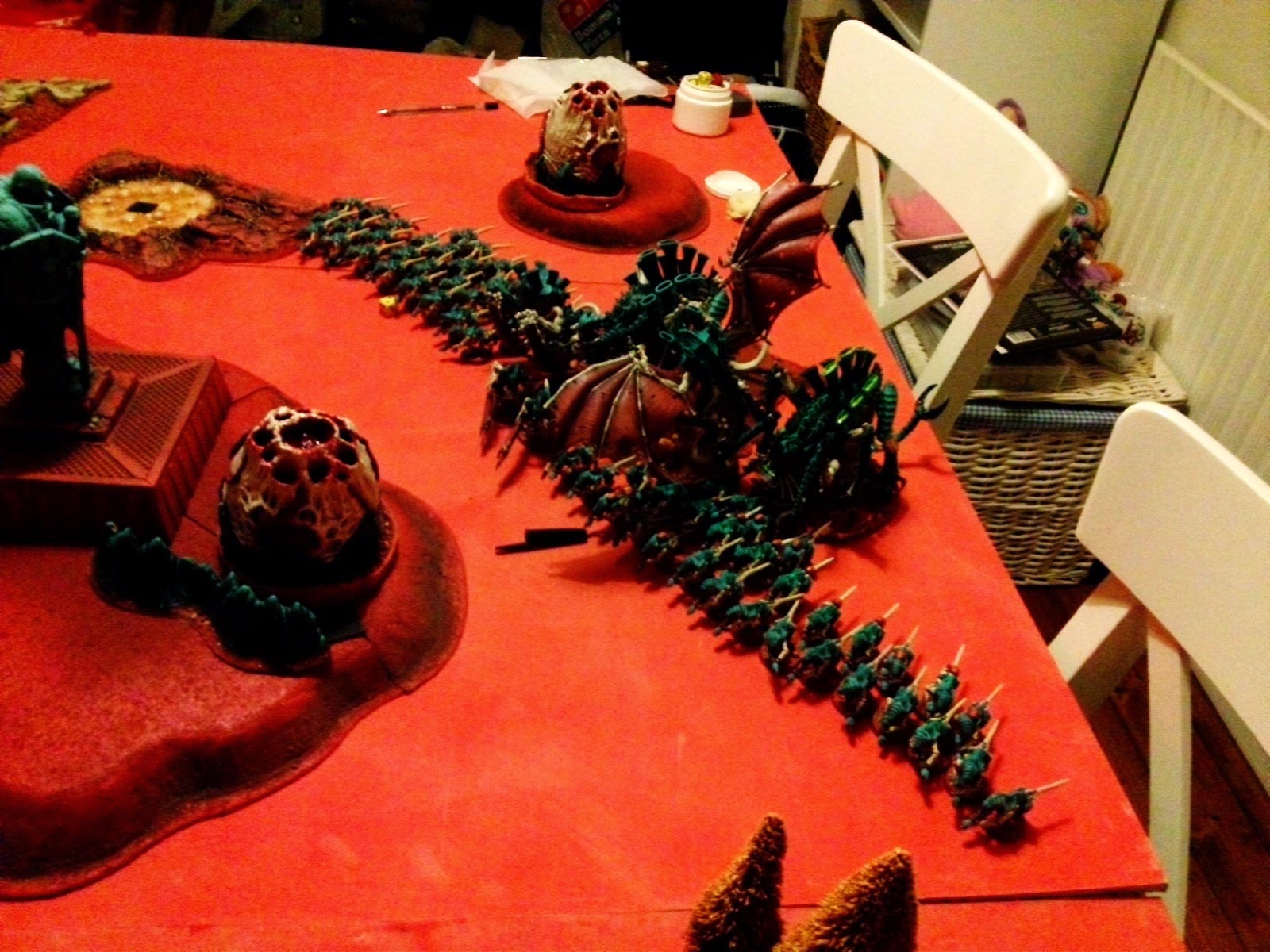 PeteB's Wraithguard/Lord and WraithSeer [Avatar proxy] heavy list seemed like it was outmatched against all my Monstrous Creatures.

I got hammered though, the mawloc mishapped [and died] when it failed to take down even one of his three War Walkers when they outflanked. Much of my dice rolling was appalling, though PeteB was equally stuck with turns of little significance. Ultimately though his force was just more durable with plenty of FnP being passed amongst his Wraithguard. The Dakkafex met an thoroughly ignominious end, charging a Wraithlord and getting killed before it could even try and hit it! 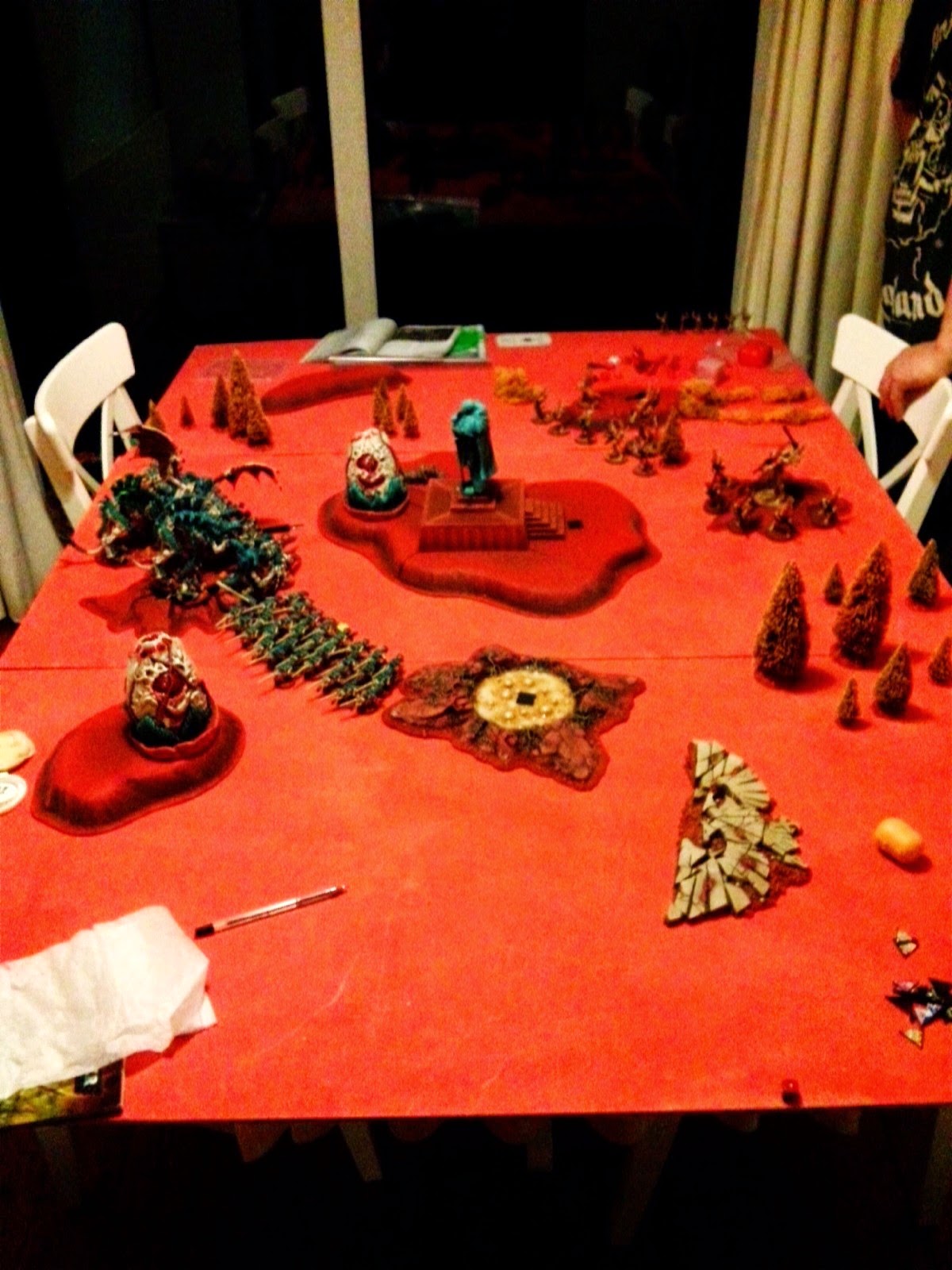 It was a good game but another reminder that the Tyranid Codex is a fickle beast. It can work but even what I would consider a 'dirty' list can roll over and die at a moments notice. PeteB was equally shocked, particularly with 'prowess' of the Dakkafex!

So it was a bit of an anti-climax and its a reminder that despite the effort put into painiting there's no guarantee the figures will perform. Once you add in the very slow progress, the array of hurdles that are obstructing the slow progress it's taken most of my momentum away. The knock on effect is I've not much 'progress' content for the blog and that's making me less inspired to write, which is a shame as I've had a number of new followers join and I really do owe it to you all to keep standards up.

I've actually been thinking about experimenting with Twitter and seeing if I can link the accounts so I can tweet some updates. I've mentioned before I need to learn the skill of 'micro-blogging', long posts are OK, but short and sweet are also useful, I just struggle keeping things brief. Twitter forces you to be brief and social media is something I need to get a firmer grasp of because I've applied fo a temporary promotion in my job which is less design [boo] but more customer engagement [yay]. I think we need to be more customer focused and embrace social media a bit more. The good thing is even with my limited experience I think I'm one of the 'sharper tools in the box' heading into this, but if anyone has experience of using Twitter and integrating it with their blogging,or building I'd be interested in any advice, both for 40kaddict and my wider experience.