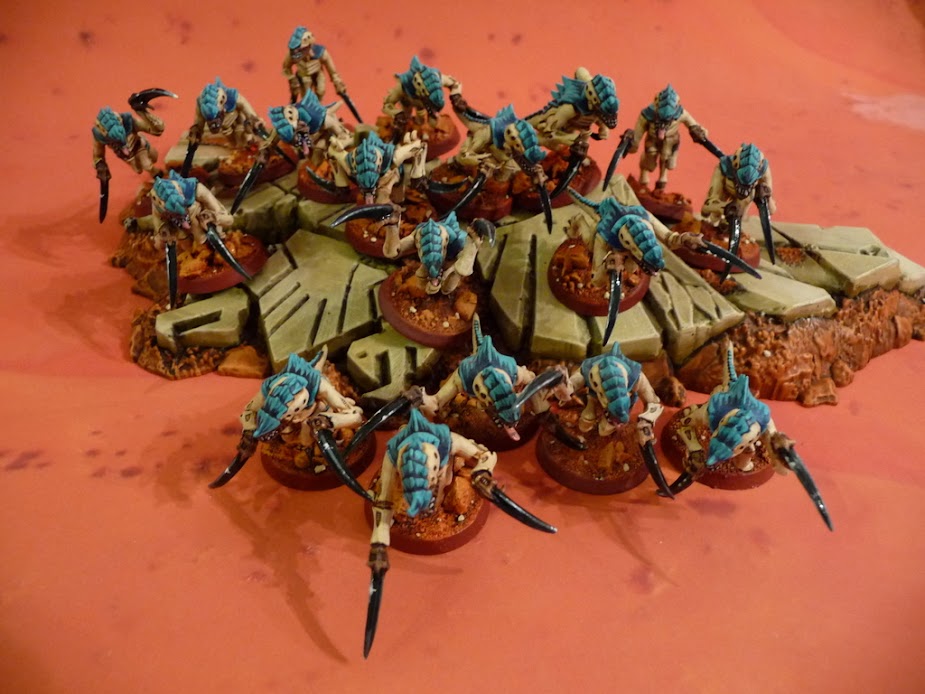 It was during the Tyranid assaults on the Tau forest world Sha'draig that it sought to evolve the Hormagaunt bio-form. Numerous time it would alter the beasts genetic make-up to counter the individual threats that the Tau threw at them. Carapace armour was improved to counter more powerful pulse rifles, lighter and more agile variants were spawned to weave through the tangled forest and then later on they were bio-adapted to hunt down Kroot. The downside to this constant evolution being they were right back to the beginning of weaker armour and the whole process had to begin again. It is not a decision the Hive Mind takes lightly when it mutates the genome of it's bio-forms but when it is the only solution to the problem it will adapt to overcome. 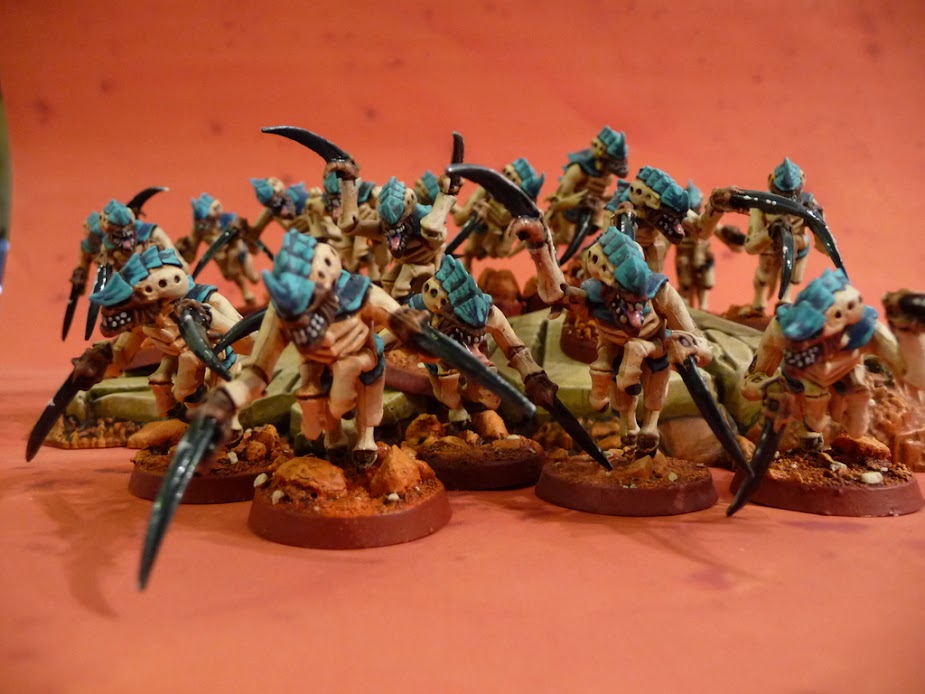 When Hive Fleet Gorgon was defeated and the three Hive Ships escaped to guarantee the experiences and bio-metric knowledge learned in fighting the Tau survived it was one of these ships that eventually arrived on Ferron Proxima. This splinter of Hive Fleet Gorgon continued to produce many Hormagaunts, blindly believing that their success on Sha'draig would also transfer to Ferron Proxima. Unfortunately the dry barren deserts were unsuitable for the Hormagaunt species. With little cover to take advantage of, quite often the Hormagaunts were destroyed before they could close with their enemy. It is believed that many Hormagaunts were then bio-retrofitted with with projectile shooting symbiotes. It was increasingly apparent that the Termagant variant of the gaunt family was far more adaptable and versatile within the Ferron environment. 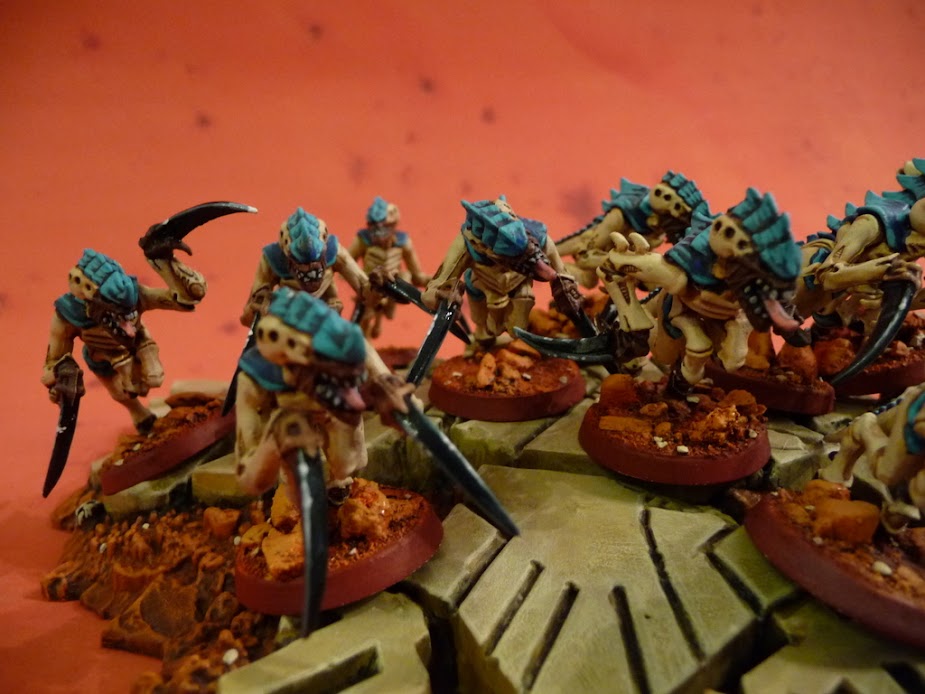 But once again the bio-magi's studies and theories have been put forward that there may in fact be a vast sea of dormant Hormagaunts within the rapidly expanding Splinter fleet. Hormagaunts of a new nature that may yet be able to overcome the sparsely vegetated environments and survive the relentless defensive salvoes of those unfortunate creatures the Tyranids wish to devour. Only time will tell if these gaunts can be the next evolutionary step in overcoming the obstacles set before it. 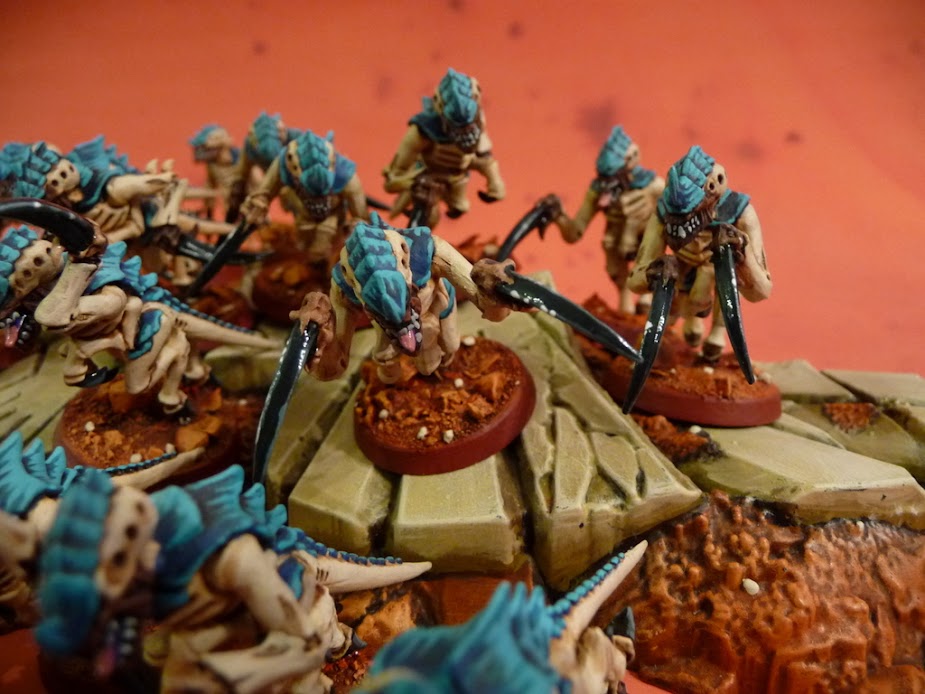 Should these new Hormagaunts prove less than the challenge, no doubt the Hive will adapt once again and continue to spawn Termagants based on their past success in the new and varied battlefields of the 41st millennium.
Posted by 40kaddict at 12:29