Time to start the Great Maw in earnest. So much for focusing on one item to ensure it's completion, instead I'll try to straddle two and potential succeed in neither. Anyway, working out how to mount the Tervigon always concerns me as I want something with a 'scenic' base but in so doing quite often means faffing around hot gluing slate, drilling holes and balancing the model. Eventually I did it thanks to putting a plasticard 'Cuban heel' on the left hoof of the Tervigon. However I put loads of PVA on the base and quite a lot of sand and have ended up with quite a chunky if overly small grained to large grained sand on it. Unfortunately most of the medium grains, which give the best effect seem to have been overwhelmed by the fine grain. Fingers crossed the Red Planet Basing still works on it. 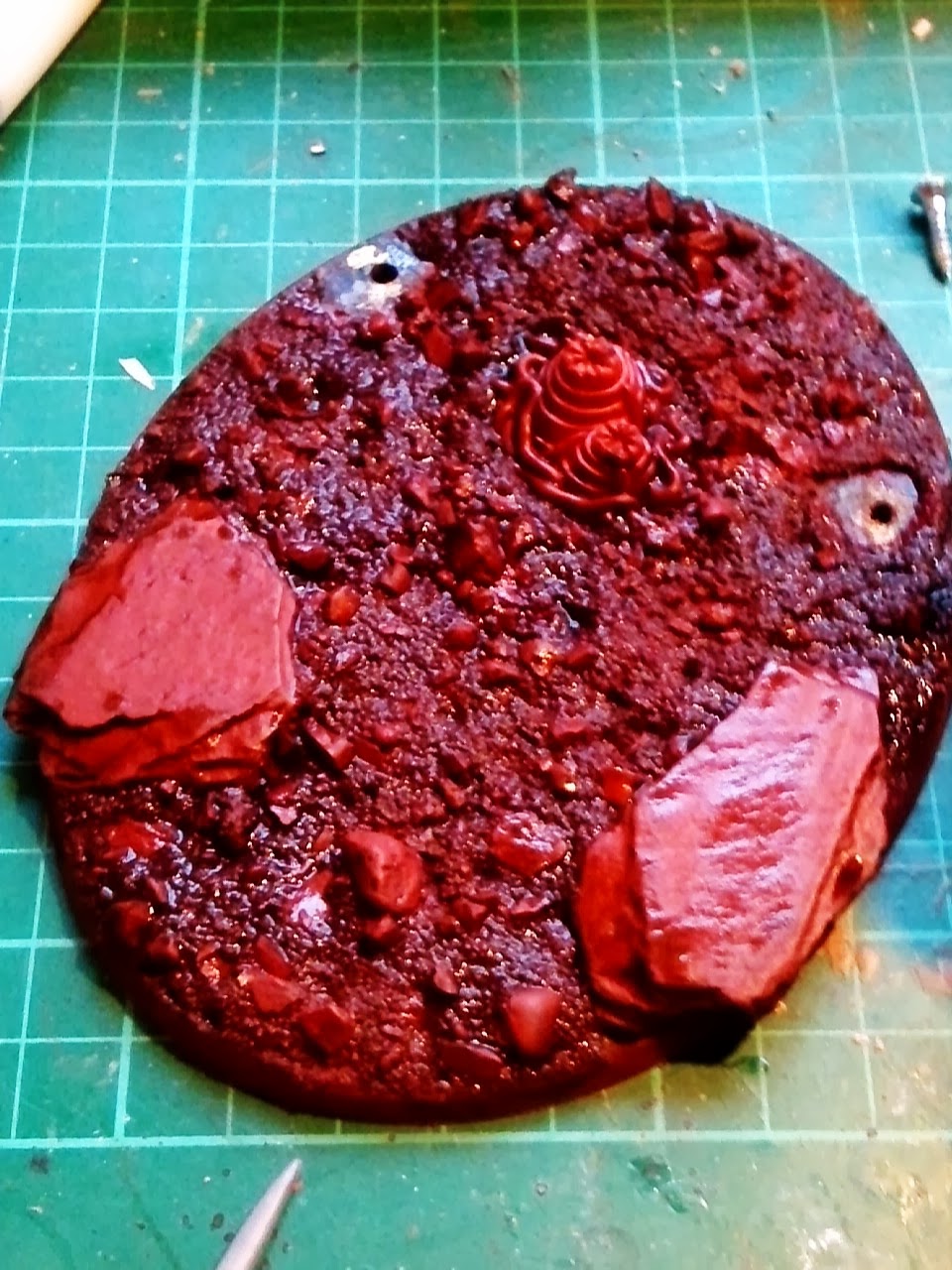 The Great Maw gets it's base coats. 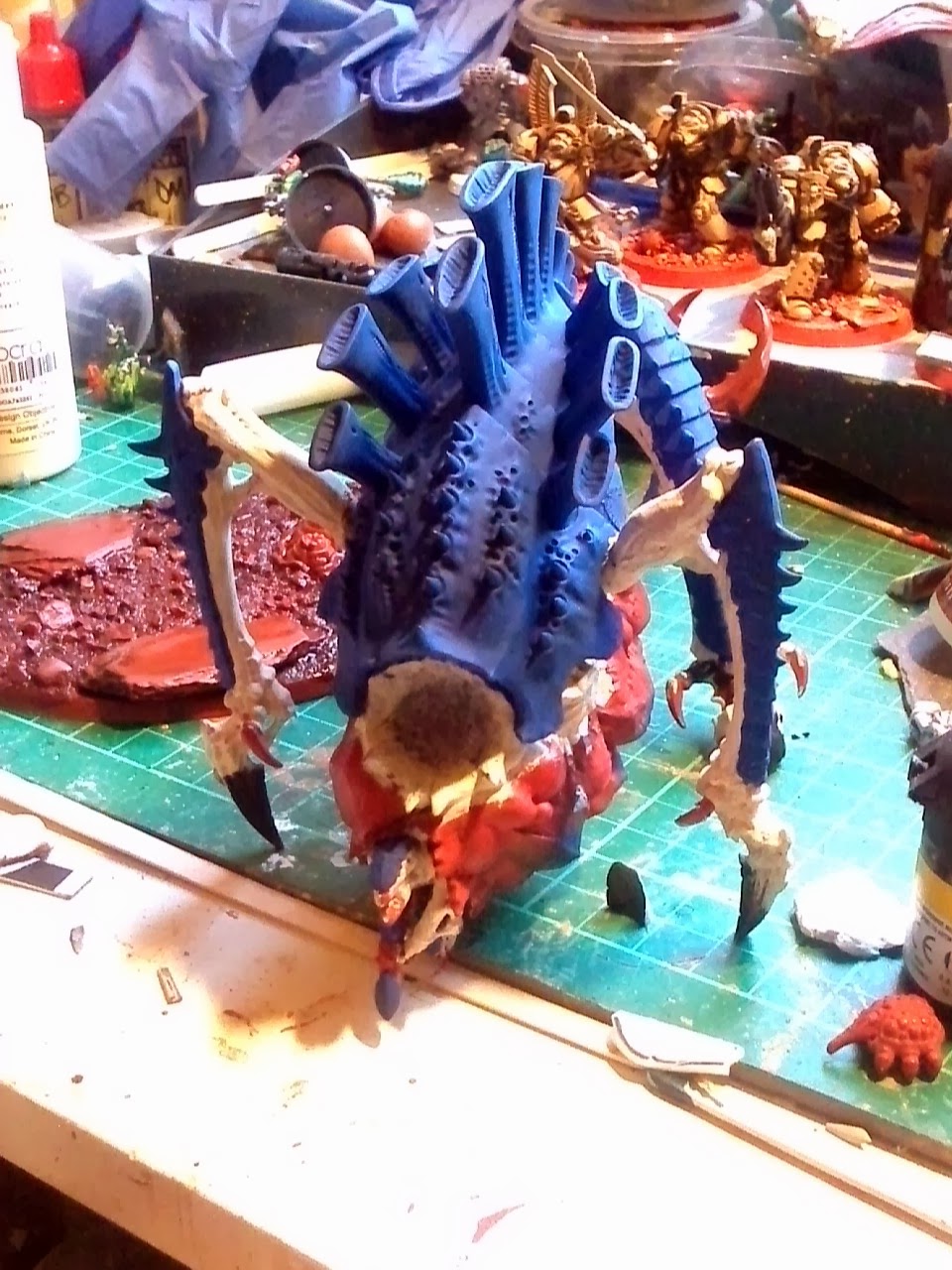 And thanks to my Facebook poll the Mawloc Pincer tail was chosen to go on the end. It seems massive, ordinarily the tail wound stick out no further than where the blue is but it curls back on itself.
The extra gaunt chitin plate didn't quite work. I tried to flatten it down and thought it would make a better disguise for the join, not that it really needed it but unfortunately that left hand side seems a little dodgy in that first shot. Underneath came out really well, the join is hardly noticeable. 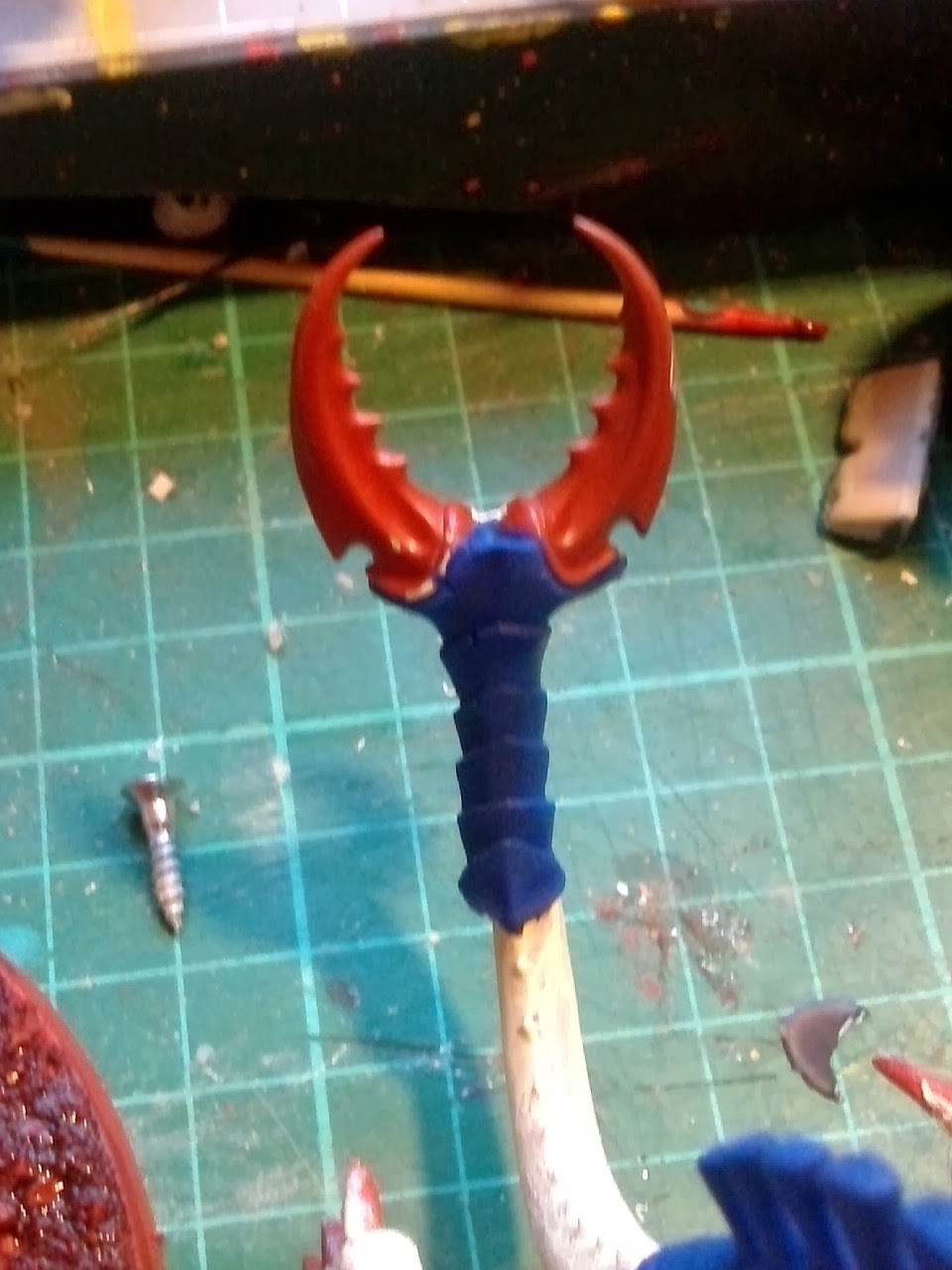 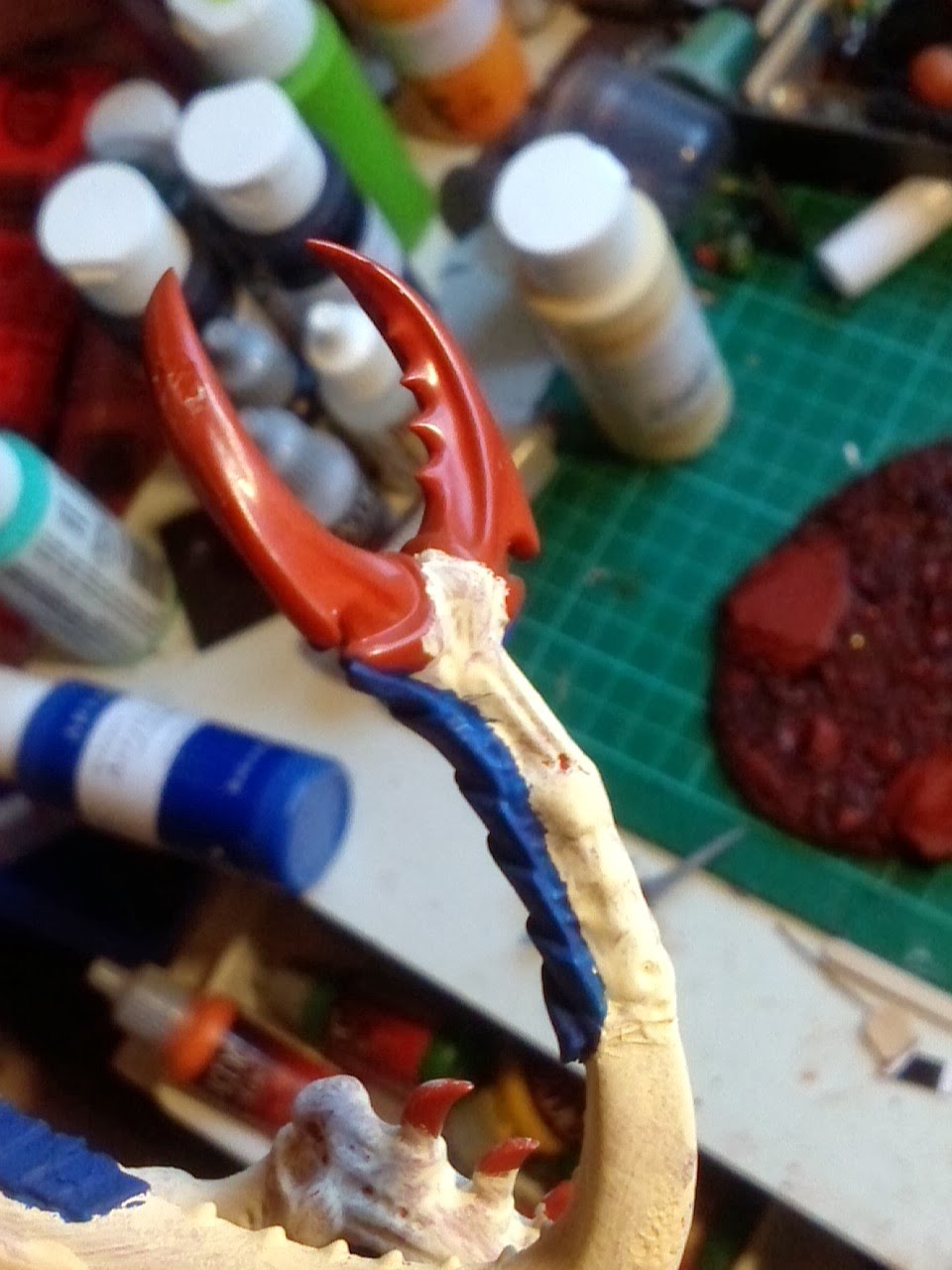 The extra plate isn't too bad from the side. I have to say it does look very different when compared to the standard tail so regardless I think it's a win. I really just wanted a different looking Tervigon to the one I had and it's a limited model for posing, without extensive effort so the small things have to deliver, and thankfully I think this does. 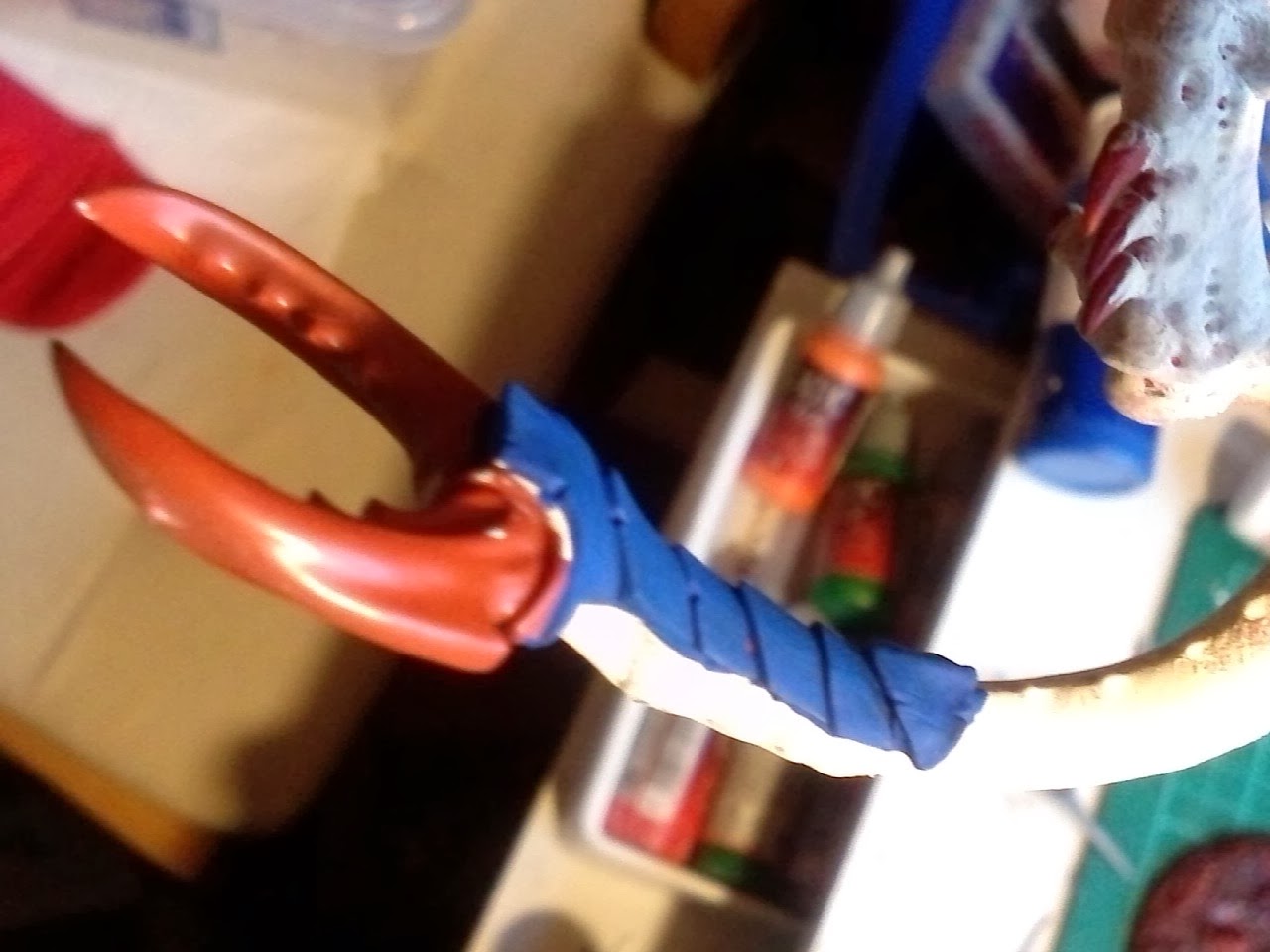 I'm also prepping the arms. I had to mount a second set of magnets on the body and mould some Milliput into the surrounding area so they could sit a little more proud of the body, it's still not ideal but it helps. I'd already started the Scything Talons on my first Tervigon, so at least I'm ahead on that, unfortunately my light Turquoise highlights and liver colours - now just Mechrite Red may make them look a little different when attached but I'll cross that bridge when I get to it. Meanwhile I had a wonderful idea that seeing as it's magnetised I could add the Fleshborer Hives so I could make a Tyrranofex. My mate Otty is still loving them and he pointed out the Fleshborer Hives got a 6" increase to their range in the new Codex making them quite deadly in his games. Unfortunately I only went and mounted the magnets on the right hand side of the Tervigon oppositely to what I did on both my Hive Tyrants. They work fine with the Close Combat weapons, just the Fleshborer Hives. 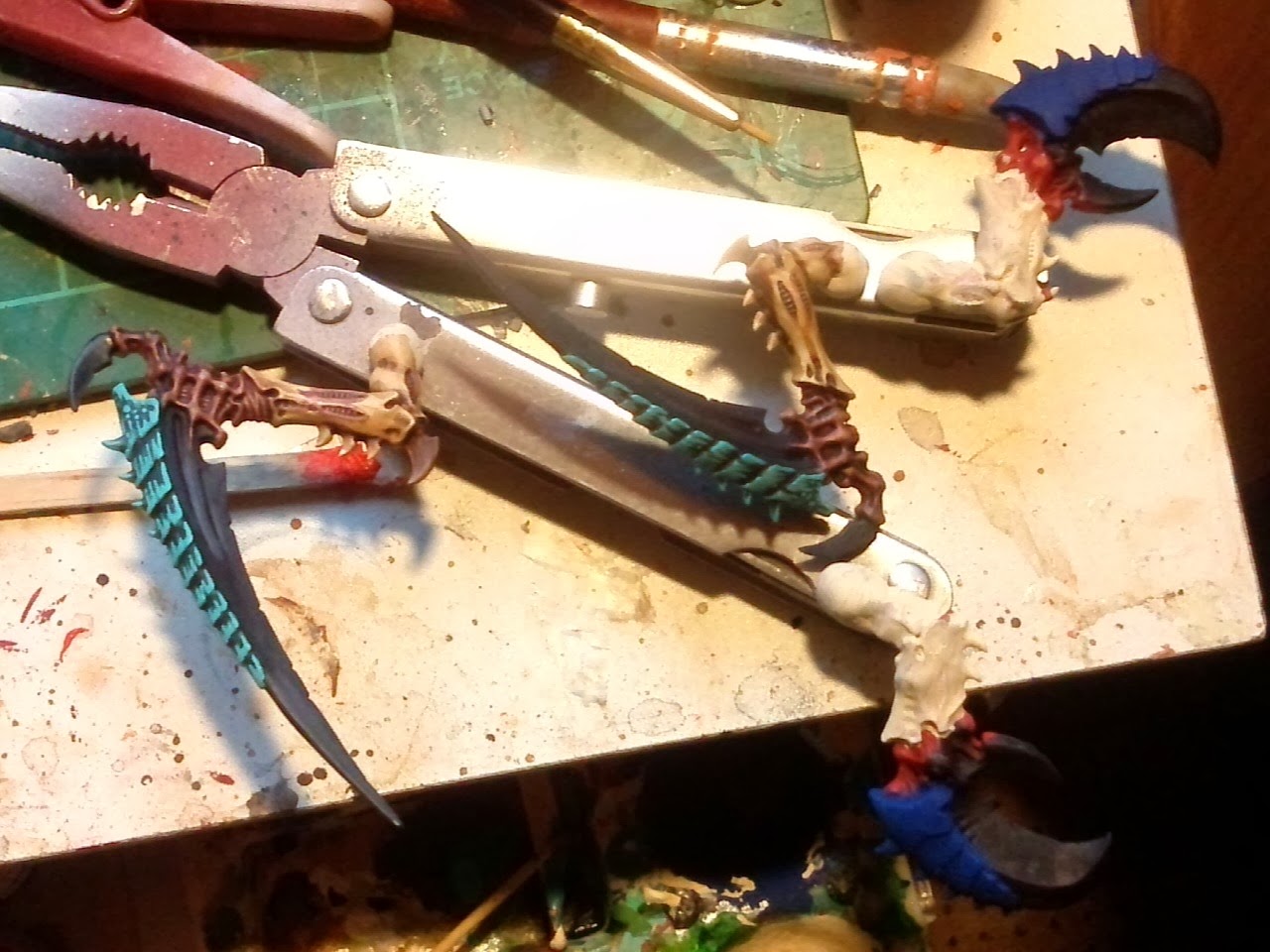 I do have a solution though - I can magnetise my Carnifex, take of it's Fleshborer Hives/Brainleech Devourers. Make sure the magnets are poled correctly and then I have the option again. I can also look at adding more weapons to the Carnifex, although right now I still have that annoying frustration rattling around in the back of my head that I cocked up because if I'd got it right I'd have those options already, sodding hindsight!