A pick and mix of progress

This feels a bit like a 'what's on my pallete' lite but my options were to separate the nid progress and the Deathwing, which is two posts or run them together as one, so I opted for the latter. 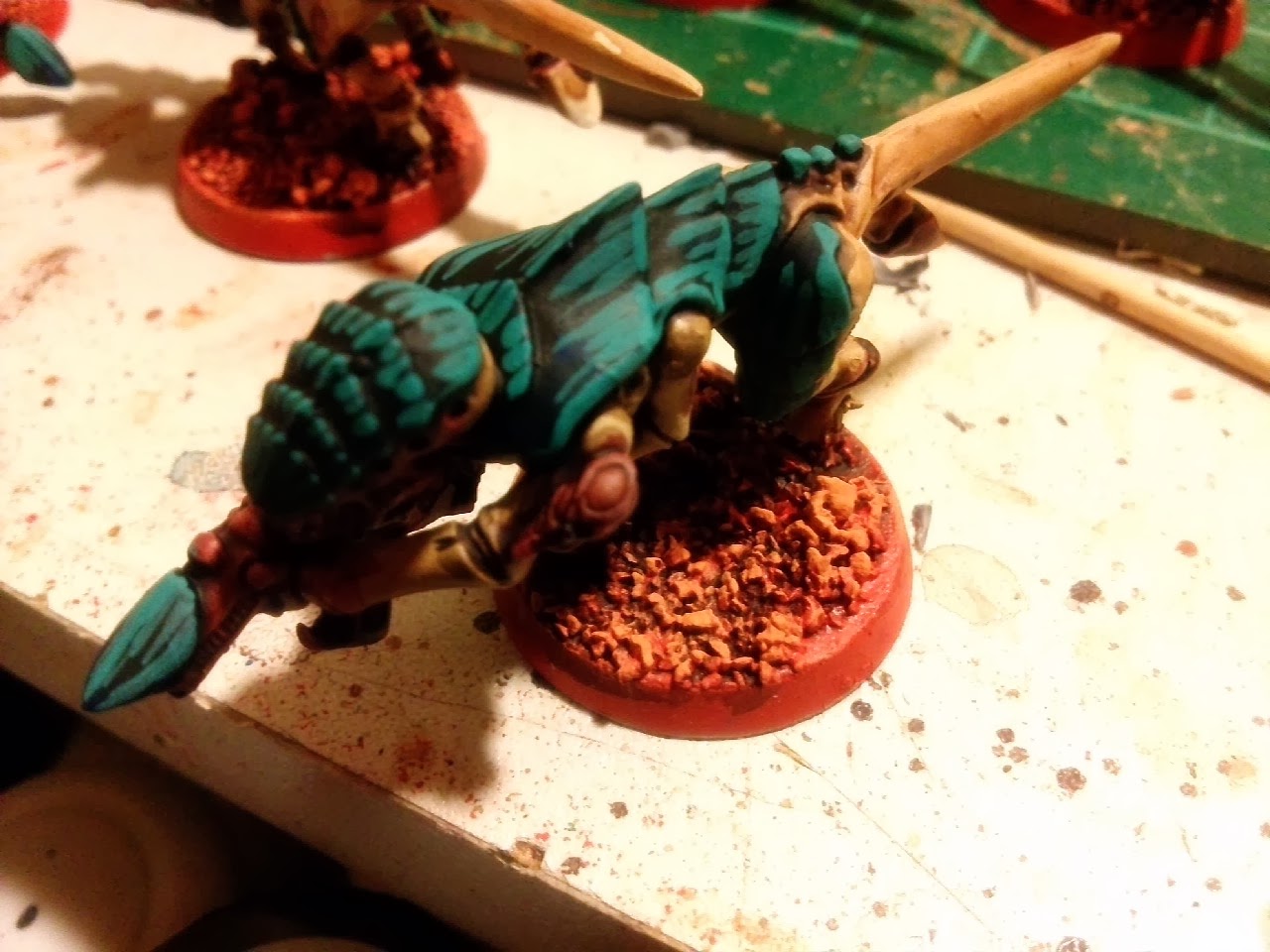 Aah, for the love of Termagants! Amazingly, despite the fact I HAVE to paint these as opposed to WANT to paint them and the last time I painted Termagants I found it a wholly unpleasant experience, I actually feel quite positive about these. HAving picked them up on ebay they were already based and running through my Red Planet Basing process first actually feels quite rewarding. Usually that's the last thing you do but turning it on it's head messes with your perception of the task ahead. 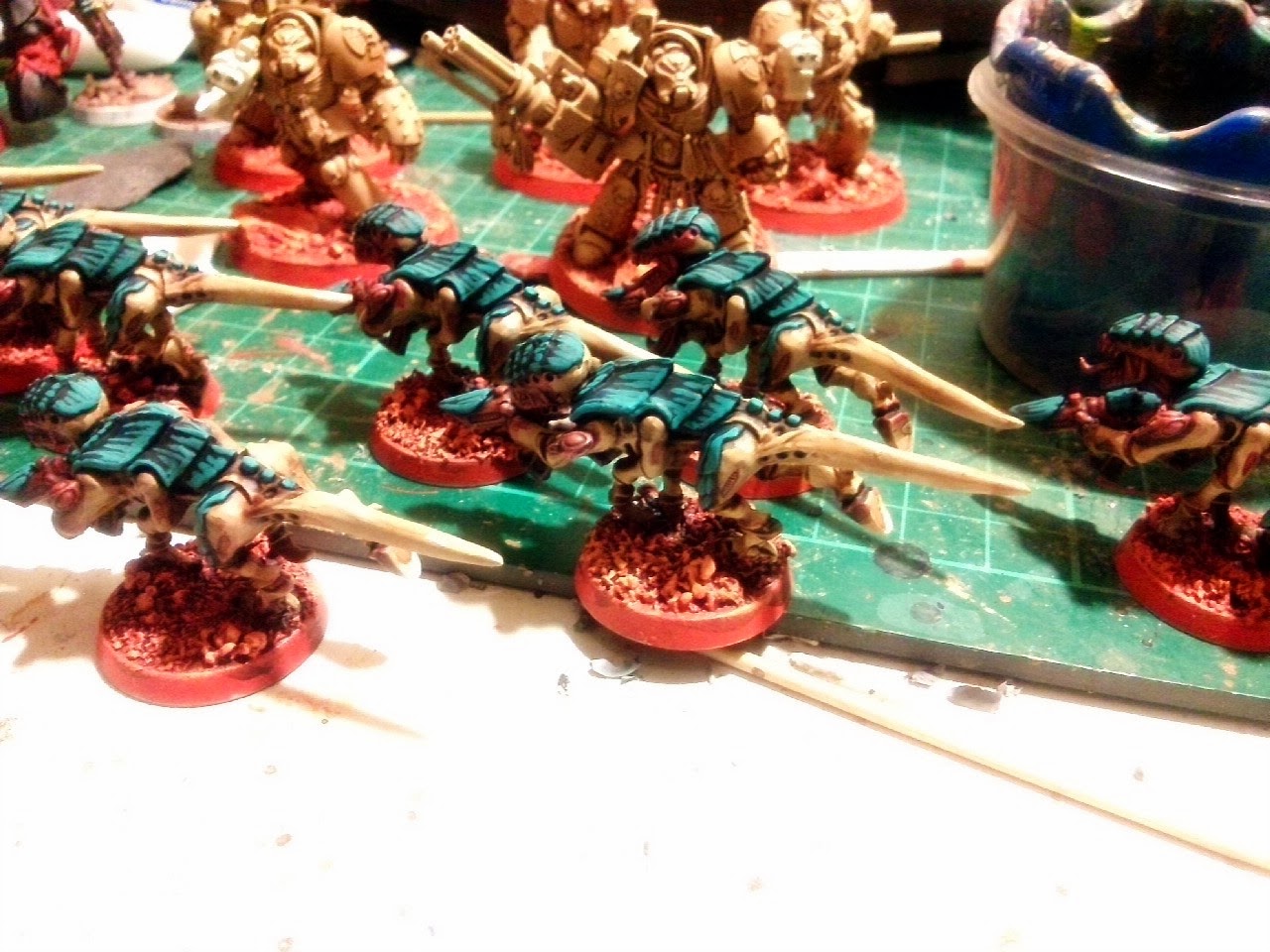 However as soon as I started to paint the striations on the Chitin thee weariness came over me and it felt like wading through treacle. So by gaunt number three I'd decided to go back to the 'chunking' process I employed last time I did gaunts. This was simply doing the same bit on each model. It may seem counter productive and slower - paint a bit, put the model down, pick another up, paint another bit repeat until fade. And also the repetition should be more mind numbing but in fact the speed increases and you get smaller wins. For instance I did an outline on all the back plates, and head plates. Striations on the last plate and the neck plate and moved onto the next model. Then it was back to the beginning to do the head, last two back plates and occasionally Fleshborers. Last thing to do were the leg plates. I don't know why this feels easier and less frustrating to do but it did and any trick I can employ to make the process run smoother I'll do. Overall it was about an hour and half. I'll have to do the same with the highlights, paint all the black bits, highlight them. Do the Bonewhite highlights [and chips on the ground] and then add some toxic green glow effect on the Toxin Sacs to finish off. Quite a compact little job and during these finishing stages, as these bits really do feel like the final furlong once the striations are done, I'll be prepping the other 10 to go through the same process. 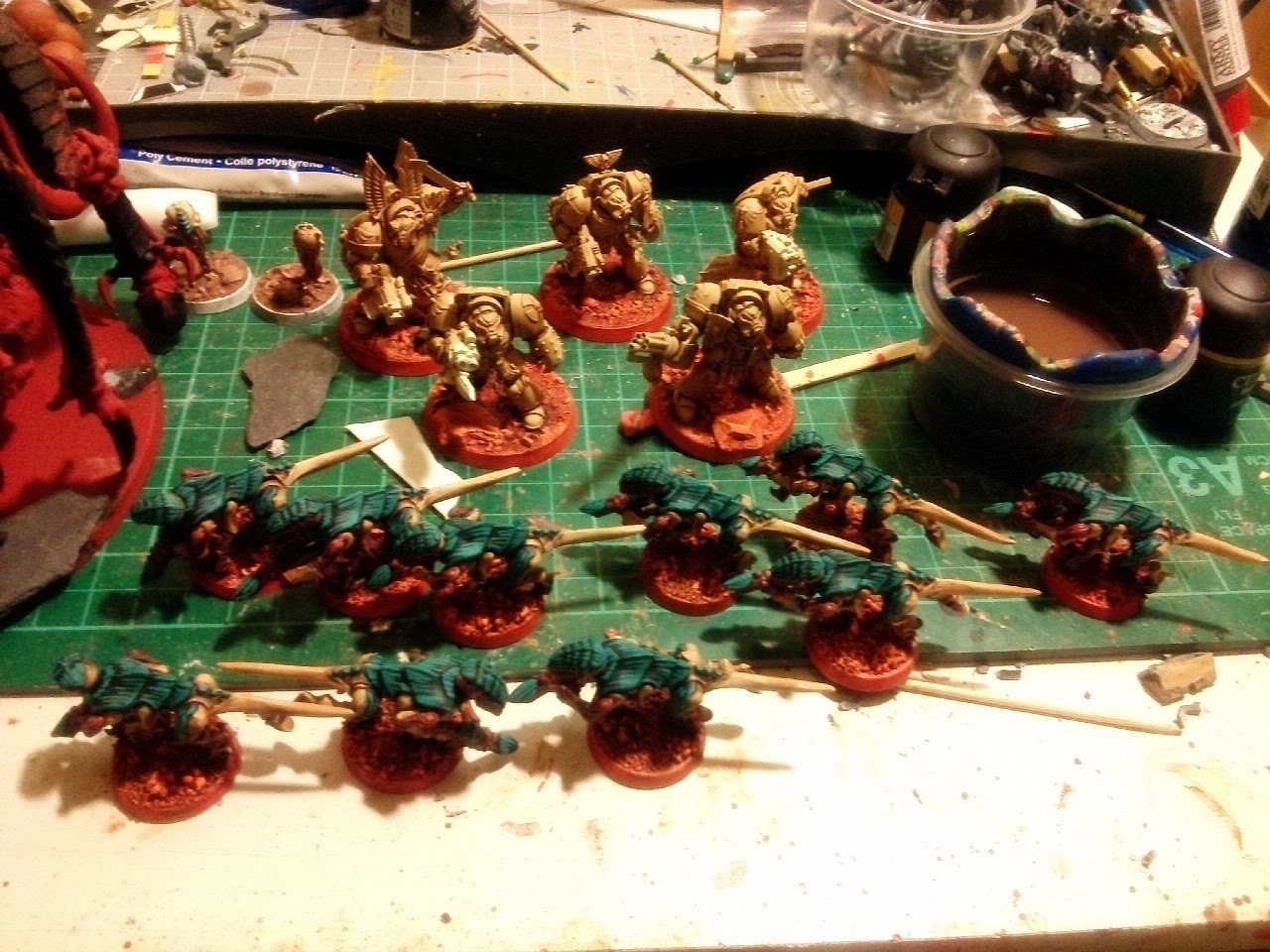 And also I sepia washed my Dark Vengeance Deathwing. They were based at the same time, which is another trick to keeping your painting momentum going. Add in another job so when you come to tackle that directly you're already 20% done. All the boring jobs like basecoats and washes are complete. 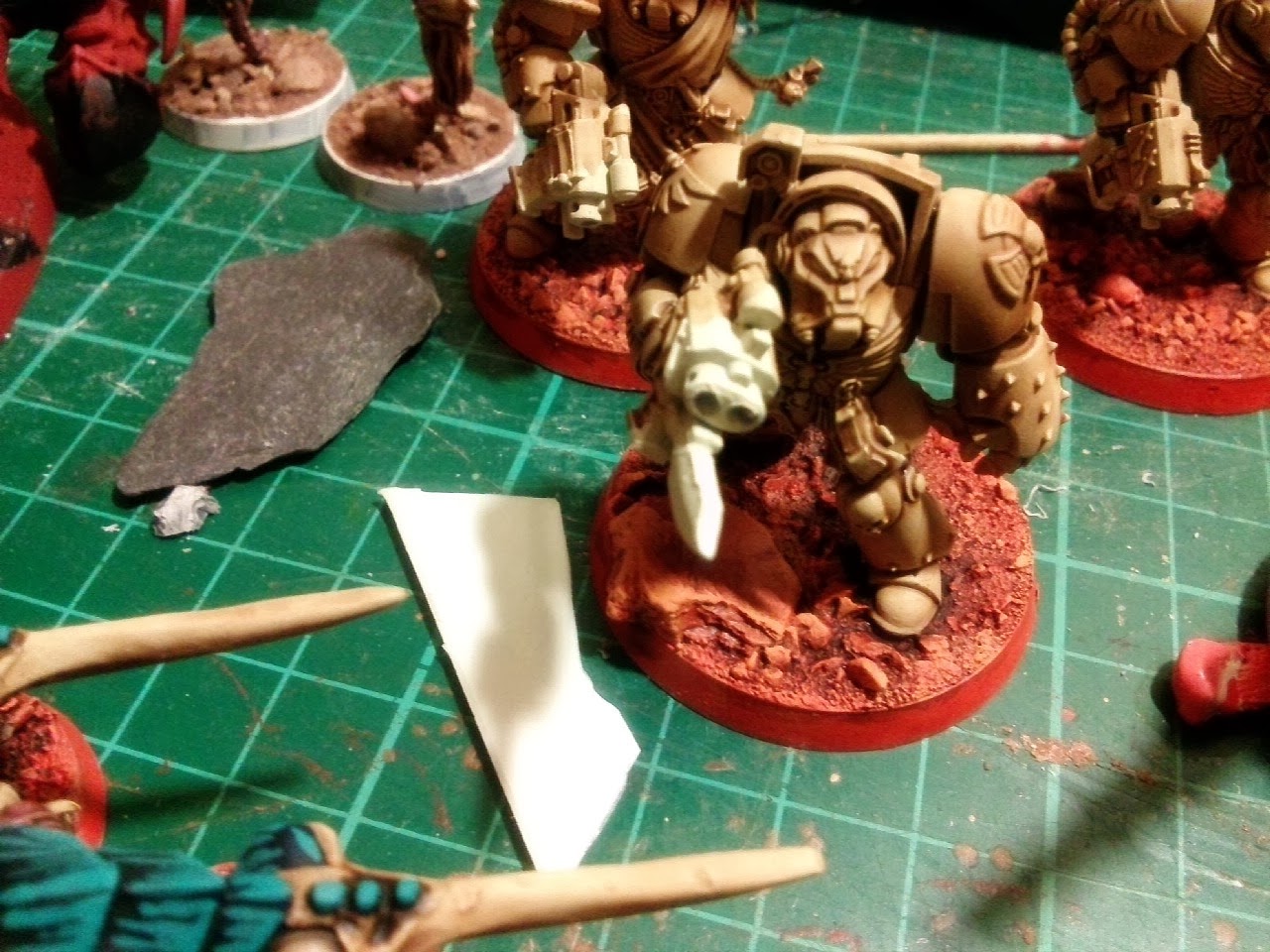 Once again they'll be a labour of love but with no Freehand badges to paint should progress quite quickly too. I really want to get my Dark Angels to a fighting force, I honestly do. There are obviously a number of things getting in the way. I'm hoping after Throne of Skulls I can devote a bit more time to them for about 3 months and then start working on project X, which should take about 3 months. 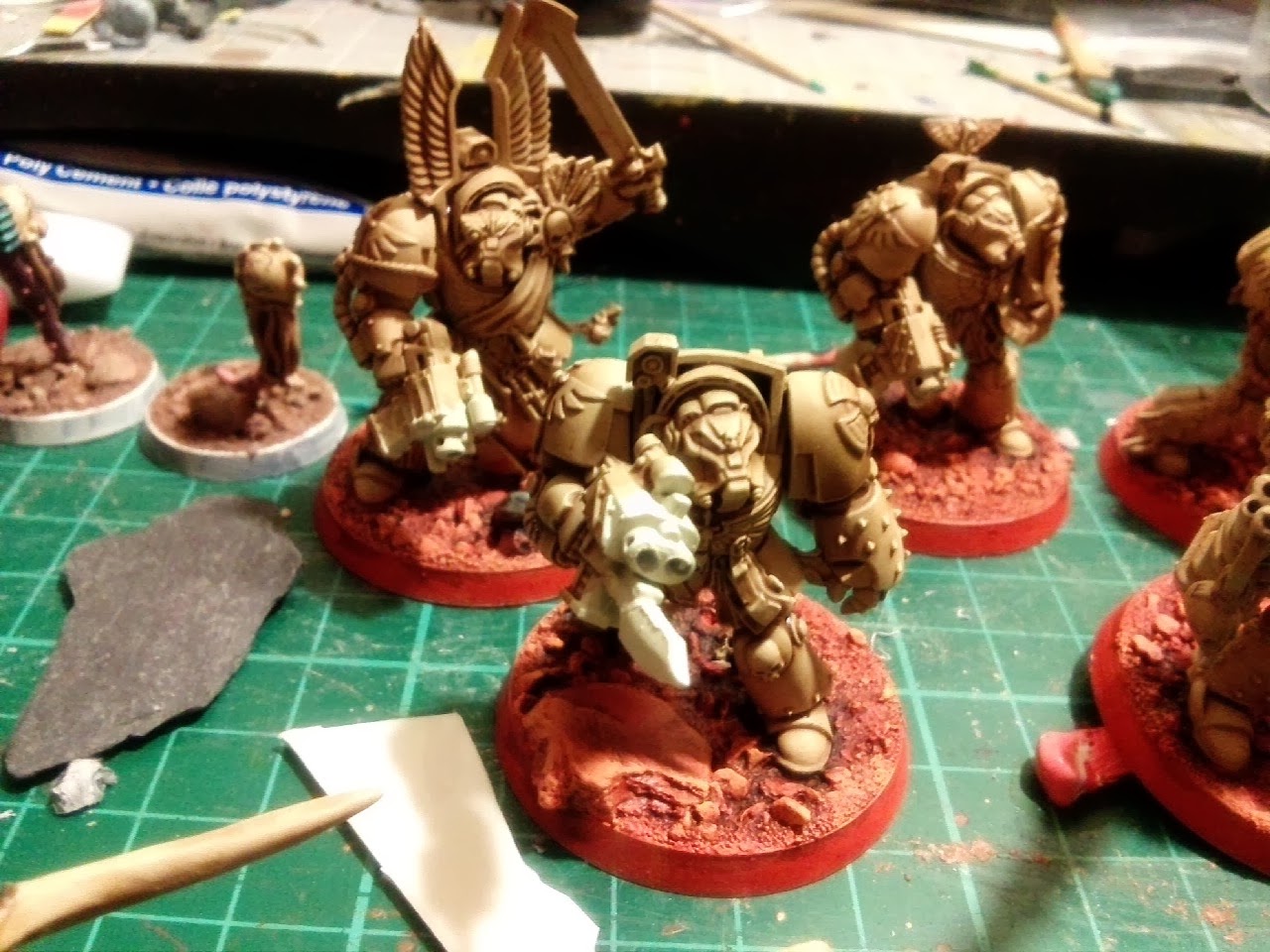 So we'll have ot see what I can achieve in that time but it's handy to have a plan, something to work towards. 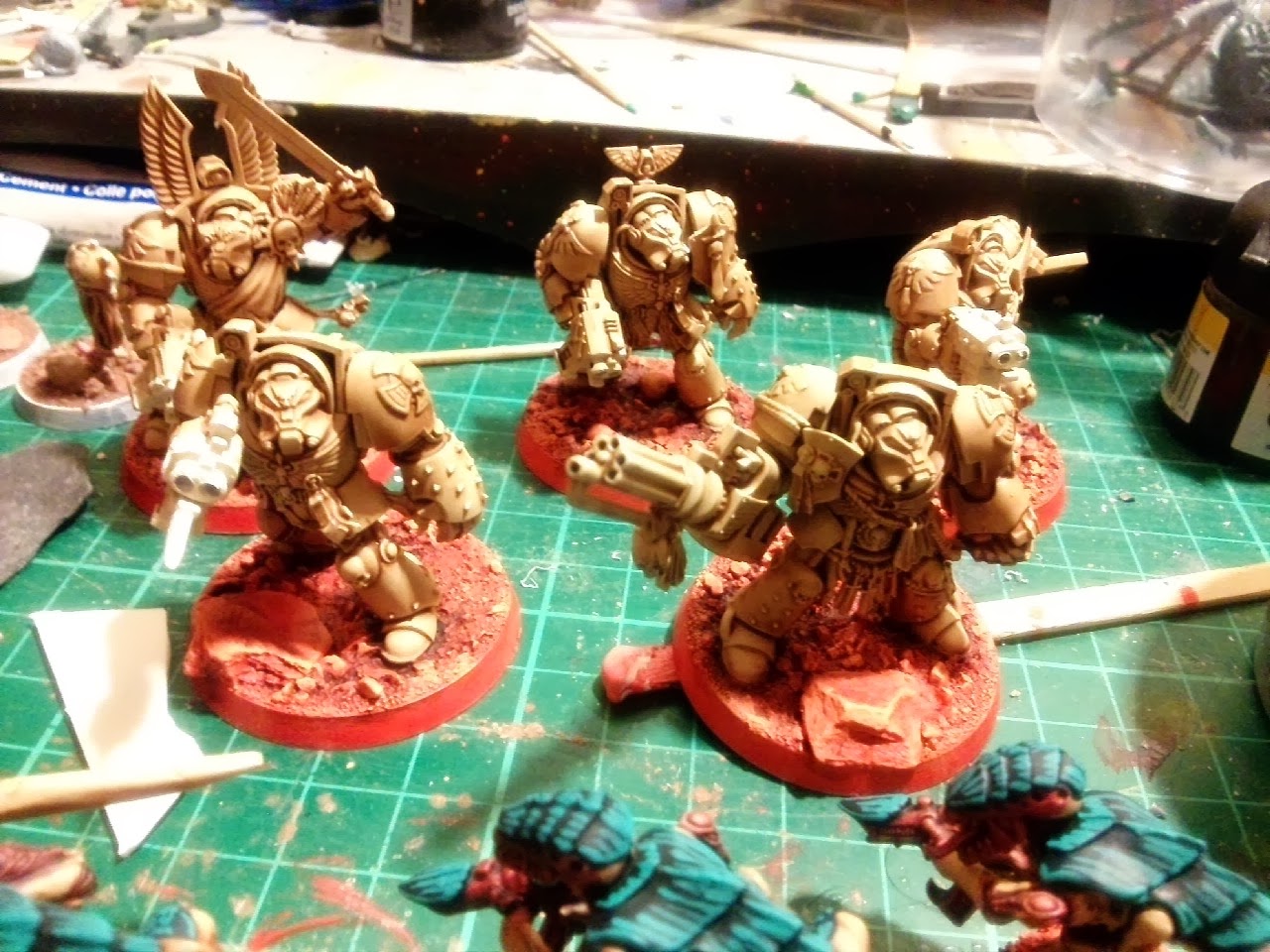 Lastly here's an update on my hobby matrix clearly you will see some changes. My gaming mojo is greatly reduced, it can't think why any clues? Yes obviously a lackluster Codex but we're not going there. The blogging has increased thanks to the massive support shown by everyone recently, it's starting to feel like a game and I want to get a better high score each month. Unfortunately my desire to blog isn't fully backed up with actual blogging as my desire to paint has gone through the roof. Modelling too has been increased, even though the Skyshield is complete/postponed [delete as appropriate] because I've had a lot of fun with my new Tervigon [blog post to follow], can't say the magnetising has been overly successful, but I still have all my limbs which is the most important thing. 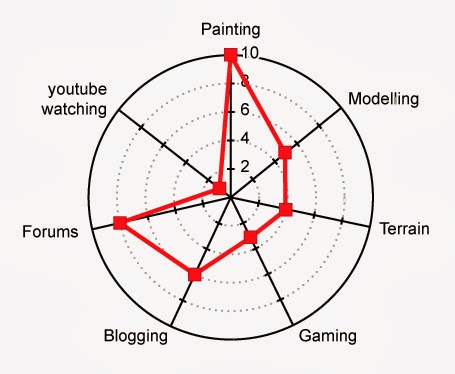 Overall I feel quite positive, there are still shadows of 'can't be bothered' and 'hobby funk' skirting around in the back of my mind, watching and waiting to pounce but hopefully I can evade them or mitigate them with the tricks I've detailed above. Having a deadline definitely helps, something to work towards. It can hinder too, feeling compelled to deliver something and sweating over the impending date's arrival. The positives outweigh the negatives though
Posted by 40kaddict at 12:18