Please let rumour 1 NOT be true - no access to Fortifications for Tyranids! Take my Spore Pods, remove the Doom but please leave me some structures to convert and build :(

Stronghold Assault may be completely redundant then and Throne of Skulls will be a completely different prospect. If one had bought the book and the rumour turned out to be true do you think you'd be able to ask for a refund as it was no longer needed?

Seems to be a very specific denial if it's correct. I know some people don't believe Nids should have access to buildings and I've gone on record as pointing out they have a Hive to Guard afterall. Additionally it's battlefield debris, they can take advantage of it if it's been left, they understand the importance of tactics and items of strategic value, if they didn't you may as well remove their ability to claim objectives too. Why not? Why not say Tyranids can't claim objectives what possible difference would that make?

You could point out that other races have specific denial of fundamental aspects of the game - Necrons don't have access to psykers, but then neither do Tau or Dark Eldar so they're not being picked on individually. Removing Fortifications from their FOC seems extremely prejudiced, verging on the current examples in our Codex/FAQ - Independent Characters joining a unit in their pod, use of quad guns, getting to re-roll witchfire spells we can't use.

I know this is still early days and I've discussed rumours already but this one chafes more than the others. Removal of the Spore Pod is a biggy, I could live with the Doom going, I half expected it but the Spore Pod was something I could adapt anyway, with them becoming Vengeance Batteries or Void Shield Generators but now you say I might not even have that!

If this rumours true it seems like this concept was just wishful thinking: 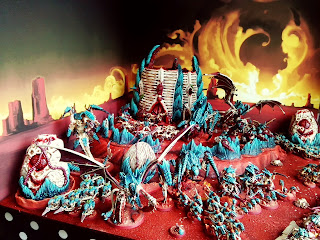