You may have noticed in my Free Radical Collective post that I finished my Chaos Cultists. There was supposed to be a 'big reveal' for this but if I'm honest I couldn't juggle everything in the right order. I actually thought I'd taken some intermediary pictures since April but I can't find any but as I said in the post I was 'doing' more than 'recording' so maybe I just got on with it. 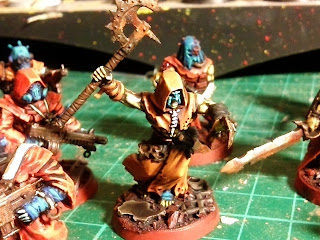 Of course I then went on my Tyranid Bastion feast so I think these took a back seat but they've never been far from the painting table, gathering dust. 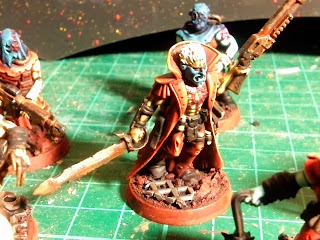 Once I hit upon connecting them to the Free Radical Collective I also knew I had to start introducing some of my Hive Fleet colours. Most of the cultists use red or orange clothing, this is to blend into the landscape and also in mockery of the Mechanicum but the bonewhite and turquoise come from their reverence of the 'nids [which they may or may not be infected by...]. 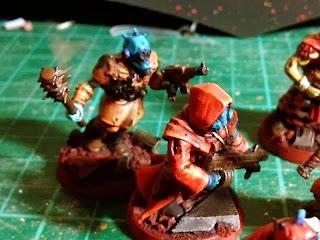 I added a whole lot of rust and grime in places. I'm sure those new technical paints would have made this a heck of a lot easier, maybe I'll invest. I also wanted a healthy or should that be unhealthy selection of skin tones - a swarthy yellow and bluey-turquoise. Colours that didn't automatically jump out as xenos but were just about recognisable for their heritage. 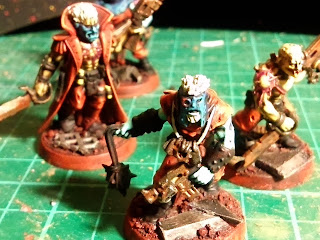 These models were actually a nightmare to paint for me. So many bits, and I wanted them to be both a unit and individuals so I tried to be random in places. I longed for the simplicity of a gaunt by the end of this. Originally these were to be my Necromunda gang, they still can be but the remaining 10 miniatures will be very different now I know where I'm going with them. 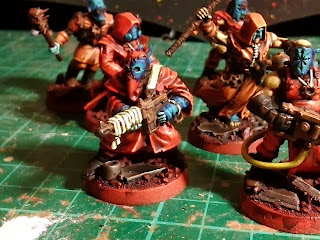 The funny thing is I actually painted 12 but one miniature got knocked into the waste bin and luckily I only found it after I'd finished but before I emptied it and another got misplaced somewhere else, but also luckily recovered. 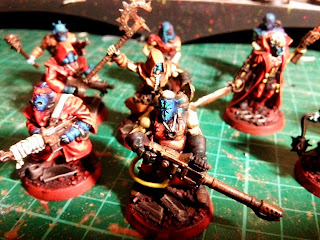