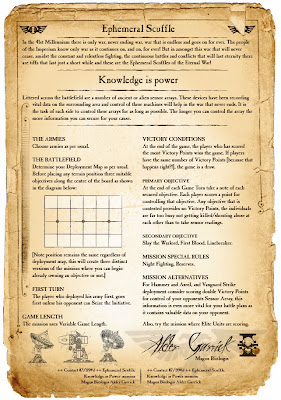 The other week at 1:30 in the morning as I struggled to get to sleep, following my epic confrontation with Ben and his Necrons, my mind was racing and in a brief epiphany I had an idea for a Battle Mission. Not only that, but I could give it away, like for FREE! Once again, who doesn't like free stuff? I do and it's the season for giving afterall. So to see out 2013 [good riddance!] and hopefully usher in a new more benevolent and fun 2014 I thought I'd make it a reality.

For all I know this mission may already exist, it's probably not the most original idea, but then again, what is? Anyway, in my typical fashion of coming up with a suitably flippant 'Aldi' naming convention for the flipside of an Eternal War mission [GW like their wordplay too] I came up with these alternative titles [and you can tell which one I chose but let me know if you prefer another]

Let me know what you think, if I'm visited by the voices again maybe they'll come up with another FREE mission?