Here we go, the Free Radical Collective in all there glory. Now officially I'm saying these are done, but there are 20 Cultists in the Dark Vengeance box, so sue me! Actually I've done a bit of work on these too but they're not so much Chaos Cultists anymore... :) wait and see. 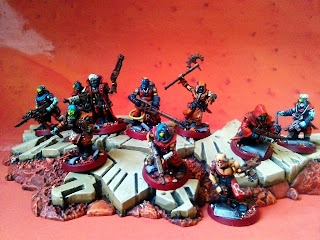 I'm not overly keen on my 'glowy eyes' it's a but wrong but they do add a slightly unearthly look to the unit, so I can live with it. 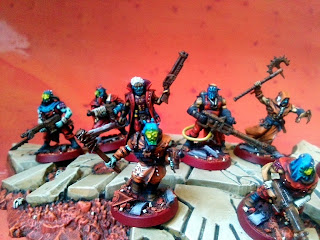 I had always hoped these would be quick to do but I spent an awful lot of time on them fussing and faffing over bits. Then the other night I did 3.5 solid hours straight, without a break. I finished the bases, red planet and the grey areas, which is the debris from the Deathwing and Inquisition strikeforce in their HQ [see I was thinking about this a lot!] 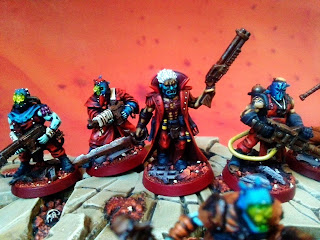 I also wanted to freehand the FRC logo, it was unsurprisingly difficult to do and in the end I did a couple of simple 'R' designs but in fact I think I missed a trick. in particular the flat area on this guys leg would have been perfect for the full logo. 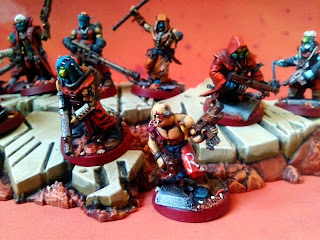 Whereas the creases here don't do me any favours. They look better than I first thought in thr pictures but the ridges do not aid clarity. Still, the reds do look quite good, I've surprised myself, makes me want to do Blood Angels! 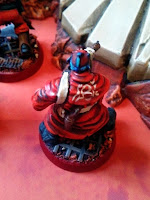 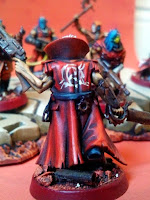 I do like the hooded gas mask guy, I'm just not convinced I did the mask justice. As for morningstar dude, that ball and chain is a bit lacklustre but I think I was losing patience by this stage. I do like his blue skin though, very Rogue Trooper. 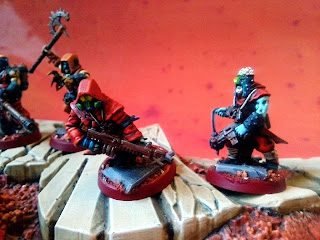 Unfortunately this mix of models was supposed to have more orange wearing fanatics, an even split but that didn't work out. Also flamer dude didn't have too many areas for the FRC logo, so I just put R's all over him, as tattoos too! 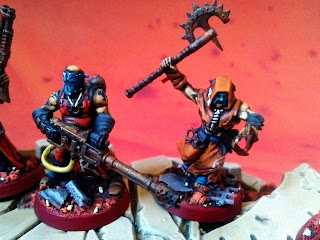 I think this FRC logo came out the best in the end. My freehanding got better as I went along, I hope it helps when I do my Dark Angel logos, maybe that's the way to go, siomething more freehand than a pristine representation of the badge? 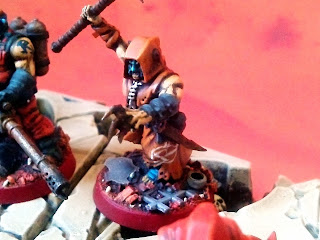 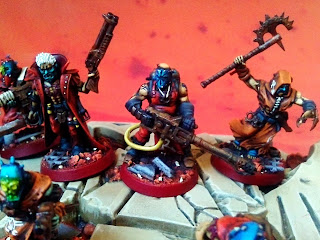 This one turned out ok, helped by the fact that I did not highlight his back at all so he had quite a few more shades of red than some of the other models. 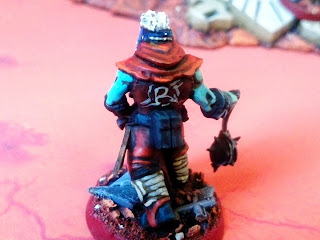 And this one too wasn't bad, if a bit chunky. 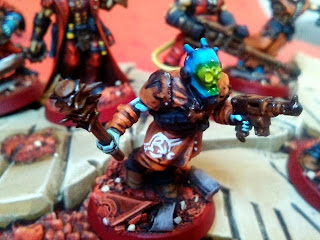 Not so sure about that mutants back, a bit of a cop out. 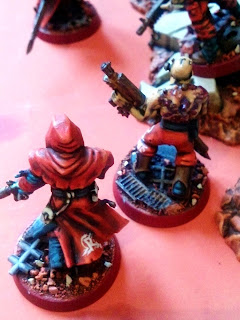 But overall I'm really impressed. As a group I managed to pull it out of the bag. Those 3.5 hours, and I rarely can focus for that amount of time without being distracted, were relentless. The bases, highlights on everything, the browns, the grey highlights on the black and reds will help in preparing for my Ravenwing. Even the red edges of the bases were and experiment, they're not Mechrite Red but in fact Vallejo Game Extra Opaque Heavy Red. The match is near perfect, although it's not as thick and slightly more glossy but only by a fraction. I can certainly see this as a perfect replacement and it will definitely fix all my frosted bases. 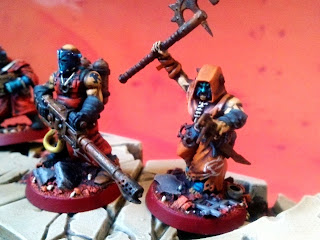 In truth this was a long slog, and actually only half complete but I learned an awful lot, even if it was hard going. Hopefully I'll be more confident with my next step, maybe finish up that Dark Angel Tactical squad. The remaining 'cultists' I will split into two groups of 5 I think, you'll see them all soon enough. I'll maybe paint them in amongst my other projects to keep me distracted from getting bored.